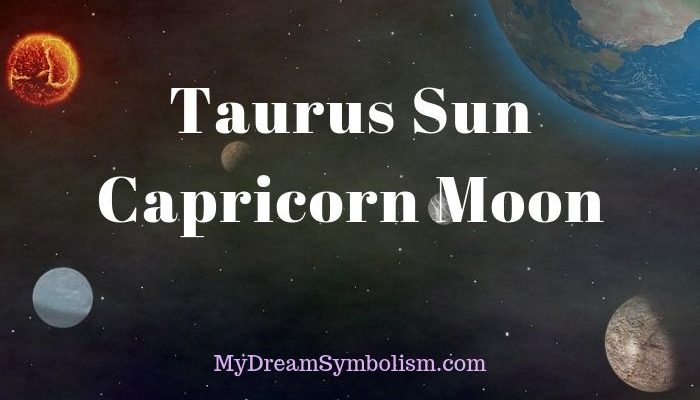 People with moon in Capricorn and Sun in Taurus are usually set very conservative. For them, a prestigious position and financial security are important.

They also work hard and with much ambition.

They would like to accommodate not only themselves, but also their family members in a good position. These characteristics are especially typical of people with the moon in Capricorn and Sun in Taurus.

If you would like to know more about this Sun Moon combination, this is the perfect opportunity to do that.

Taurus -born know how to enjoy life. They love good food, socializing, and have an excellent sense of art. These gourmets have a thing for beautiful things, and would like to call them their own.

In general, the Taurus is firmly anchored in the material world. More than any other zodiac, he uses all his energy to build and maintain his fortune.

As a rule, people with sun in the Taurus are conservative pragmatists. They rely on old proven, as on new, untried, techniques. They pursue their goals with remarkable patience and tenacity. The Taurus persistently walks his way until the goal is fully achieved.

In order to learn about the inside and the childhood of the Sun in Taurus and Moon in Capricorn person, in the system of astrology we should not only look at the sign of the sun and the ascendant, but also the moon. The Moon in Capricorn will give us some clues about his behavior in relationships.

The man with the moon in the zodiac Capricorn has also in the horoscope the basic need to take responsibility. Capricorn is eager, dutiful, serious, controlled and disciplined. His downsides are that he is suspicious, pessimistic and closed.

He tends to overburden himself with duties and responsibilities, but on the other hand he is burning for his work. At best, he finds a task that goes beyond him and he can devote himself to all his emotions.

The moon in Capricorn and Sun in Taurus symbolizes the need to have familiar things around. He will try to make use of the proven, if this is possible. It shows the need for objectivity in the emotional feeling. 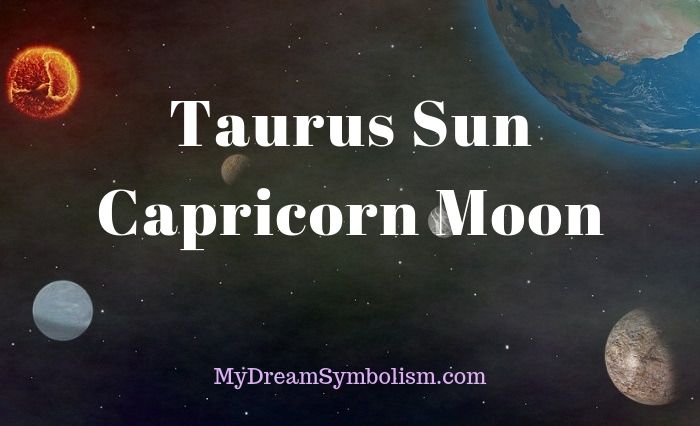 However, this also goes hand in hand with the ability to recognize mental laws. Given the emotional maturity, the moon in Capricorn is capable of helping others mentally.

Here we also find people who, for the reasons described above, have friendships that last a lifetime. The moon in Capricorn then also symbolizes the need to find something that has continuity.

He would like to outsmart time, but also the moon in Capricorn will have to acknowledge that there is not really anything permanent, but that everything is always changing.

On the other hand we get with the moon in Capricorn but also a partner who is very reliable, who is punctual and is with us, in good, but also in bad times and that is not to be despised.

Capricorn is often compared to the mythical figure of Merlin, who, according to legend, lived backwards through time. The child with the moon in Capricorn is often very adult as a child and we are always younger in age. He often looks smart and a kid very seriously.

People with Moon in Capricorn and Sun in Taurus Zodiac signs feel good in their emotions. If the Sagittarius Moon strives for vastness, grandeur and majesty above the banal, we find the emotional subordination to practical constraints in the Capricorn quality moon.

Where sensation is not appropriate, the teeth are clenched and not littered. And the other is credited as a weakness, if they let themselves go too much.

Already in the womb, the unborn learned that life is no picnic. The mother often felt already confined during pregnancy or hindered in her development. Their coping strategy takes place on the rational level (“I have to go through it now, because nothing helps”).

The child experiences the mother as reliable and dutiful, not necessarily loveless, but not exactly full of exuberant feelings in dealing with the child. Due to fateful circumstances, she does not feel able to play extensively with the child, to fool, to be silly, and to have fun.

Thus, early on, the child learns to dose sensory demands, to withdraw and to fulfill what is expected of him. The child feels with the mother and tries to share a part of her destiny.

Thus, it takes responsibility at an early age and is also willing to: Either the mother is ill or mentally unstable, or she is missing at home, because professionally involved.

As a child, they often seem serious, they lack the playful ease, the certain ingenuous light-footedness, and the children is innate in their innocence.

So these people master crisis situations well even later, they seem to get along with difficult life phases better than with uncomplicated ones.

These characters have a good instinct for their lives that is in the real world. They feel where to settle, whom to trust, whom to indulge in.

Their instinct helps them to acquire, so they usually choose the right insurance agents for themselves. Their outer softness hides something the hard, if open-minded core, which facilitates the handling of the environment.

They arrive, they talk, they attract, and they have a great deal of moods that others like! Some things are a bit too blurry; they find their own style difficult, but they can remain silent and understand in silence.

They feel and contribute so much to the partnership of the sexes. In love they devotionally dream without losing themselves, that’s a good mix. Loneliness is hard for them to endure, they all do it someday, but then they know the value of commonality, of their own home.

For nature, they have a good instinct, they feel weather changes, and they can make a good connection with animals and actually bring man back into harmony with nature.

They also suspect where the point is that man can no longer afford to fall back into the animal! You have to outgrow your original state, you know that; so they are always set from the inside always on a civilization development.

There is the tendency to be very self-critical, so that a child with this constellation in offense goes so strong with himself to court, that a punishment is often superfluous.

Although the Moon / Capricorn child looks very mature, it is very affectionate and enjoys body contact, even if it does not always show this pleasure.

People with moon in Capricorn are able to put into action goals once set by patience and perseverance. Reason for their ambitious pursuit of success is the desire for self-affirmation.

Because they are uncertain in their own appreciation, which is why they can also respond hypersensitive to resignations. Therefore they want to increase their own self-esteem by personal validity and professional success.

If the Moon is very challenging in Capricorn, you may be dealing with a calculating personality who seeks to gain power without regard for the feelings of others.

Learning task for these people is more joy in their lives and give their feelings more expression. If you want to learn more about the Moon in Capricorn, ask an experienced expert!

According to the partner horoscope, the moon in Capricorn has the need for control and power.

Our inner child, symbolized by the moon in Capricorn in our horoscope, wants to determine and becomes very defiant and unreasonable, if it does not get its will.

This should be known as a partner of the Moon in Capricorn. It can come again and again to power trials and battles. In addition, man with the moon in Capricorn often suffers from his feelings.

At times he can be very distant and self-contained. For the partner then often only cold and rejection. No one does this hurt more than the owner of the moon himself.

The Best match for those with Sun in Taurus and Moon in Capricorn is someone who has its moon in another earth sign, such as Taurus or Virgo.

Unconsciously they are always looking for problematic constellations, be it at work or in partnership.

They get a good deal of self-esteem from the willingness to be there for others, to take responsibility, to take on duties.

Every person is full of emotions, is sensitive and vulnerable. So also the zodiac sign in Capricorn Moon. Only this moon is hidden behind a strong defensive wall. In the different moon constellations, the hidden fears of the respective human are decoded.

Born under Capricorn Moon and Taurus Sun show their counterpart cool, strong and aloof. The door to your own emotions opens very slowly. Too great is the fear of being hurt, too deep the fear of being rejected, being unloved? Her own expressions of emotion often seem overcooled, harsh, or at least reserved.

This theme will also be incorporated into future partnerships, which will be a challenge for both. The partner senses that there is a soft core behind the hard shell and tries to bring it out. The Capricorn Moon does not want to leave its armor, trying hard to keep itself and the situation under control.

Often, in the course of life, in the course of its development, it comes to a drastic experience in which the control is swept away, the imposed ice sheets melt into a sea of ​​tears, and suppressed feelings break out.

Surprisingly, our Capricorn Moon and Taurus Sun will then realize that nothing is happening to him, on the contrary, that he is lovingly caught, that warm emotions come back.

Maybe now he can make up for a bit of what he has been missing for so long: warmth, affection, trusting devotion – giving and receiving.

People with Moon in Capricorn and Sun in Taurus are very cautious and reserved, especially in expressing their feelings. They usually appear shy and somewhat inhibited. Seen from the outside, such people with moon in Capricorn seem aloof and emotionally slightly cool.

That may well be because they take life very seriously and emotionally identify with factual, rather than spiritual values.