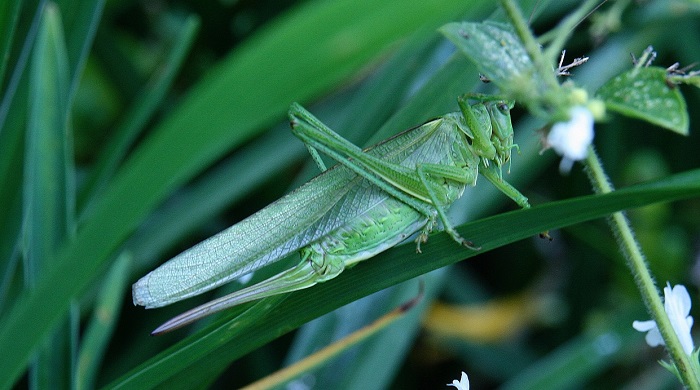 Grasshoppers usually meet us on fields and meadows.

In the summer you hear its loud chirping, which results from rubbing with the hind legs.

The zoology distinguishes clearly between grasshoppers, crickets and cicadas, in the symbolism is not clearly determined.

In the Bible we find the image of the grasshopper very often.

The Book of Exodus, the second of the five books of Moses, describes the plague of locusts over Egypt, one of the seven plagues imposed on the Egyptians by the Lord Yahweh, to make Pharaoh draw the Israelites from his land: “When it was morning, the east wind had brought the grasshoppers into the country.

They fell over all Egypt and settled in swarms. They covered the surface of the whole country, and the land was black from them. They ate up all the vegetation of the land and all the fruits of the trees, nothing remained green in the whole of Egypt.

The prophet Joel urgently calls for repentance after a locust plague.

Grasshoppers also stand for the approaching judgment, as in the Revelation of John (Rev. 9: 3): on calling the fifth trumpet, grasshoppers came out of a smoking abyss “… and they were given power as they have scorpions on the earth They were told not to harm the grass on the earth, the green plants and the trees, but only the people who do not have the seal of God on their foreheads.”

These people should not be killed in the sequence, but tormented for five months, with the pain that a scorpion sting inflicts on man.

The grasshoppers are increasingly turning into demonic beings: „And the locusts look like horses prepared for battle; on their heads they carry something resembling gold-shimmering wreaths, and their faces are like faces of men, their hair is like the hair of males, their teeth like a lion’s teeth, their breasts like an iron shell; and the roar of their wings is like the roaring of wagons …

“They are under the authority of Abaddon (Hebrew) and Apollo (Greek), both meaning.” 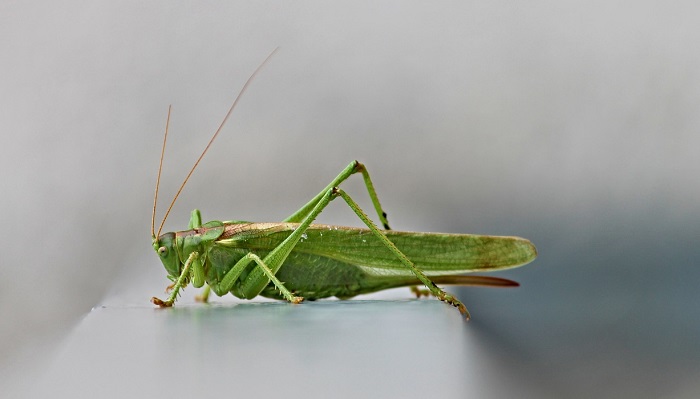 Above all, the migratory grasshopper, which devastates whole tracts of land in large swarms, is a symbol of voracity and. Destruction and is considered the visitation of God. In the Apocalypse of John, the grasshopper is interpreted either as a symbol of the heretics or as a vision of demonic powers.

The cicada is considered a demon of light and darkness in cyclic periods. The connection of grasshoppers with the venom of scorpions can be considered through the traditional symbolism of astrology, which associates with the scorpion terms such as male sexuality, destruction, occult, mystical and enlightenment; as a counterbalance to the poison, healing and resurrection from death is called.

Thus, even a dangerous-looking sign is understood as ambivalent – as a change and at the same time a symbol of overcoming death.

The grasshopper itself in ancient China meant rich blessing to children and a symbol of happiness and prosperity, perhaps because it was seen as a symbol of the soul. The cicada meant there eternal youth, mastery of desire and vice, immortality or survival after death.

For example, a cicada amulet made of jade was placed in the mouth of the deceased. The stylized cicada ornament was also understood as a metaphor for “principles”.

In Greece it was assumed that the cicada had no blood and lives from dew. Therefore she stood there for immortality.

It was an attribute of Tithonos who achieved immortality, but not eternal youth, so that he grew older and weaker until he turned into a cicada, and how those constantly-incomprehensible sounds were uttered.

The cricket is a symbol of summer and courage among the Chinese, but also for death a. Resurrection (also rebirth), as it lays her eggs in the ground and from there comes to the surface as a finished animal after a larval phase.

In the Mediterranean cultures, for example, the cricket, which is also known as crickets in the house and around the hearth, is regarded as a lucky charm and fertility symbol. Grasshopper swarms, however, were considered signs of disruption of the cosmic order.

By Gregor the Great (540-604 AD) the locust was described as a companion of Christ to the Gentiles, and because of its molting, it becomes the symbol of the Risen Savior.

Therefore, a grasshopper in the left hand of the baby Jesus is used as a symbol of the conversion of the Gentiles.

The cicada was also occasionally the symbol of the tireless poet, his assistant or attribute of the muses. In the past, stories often described a “grilling creature”.

So taking all the symbolic background of a grasshopper, can we say that it is a luck sign? If we take only the Christian and Biblical view of the grasshopper then we can’t really say that they are a good luck sign.

Next time you see a grasshopper in your home; don’t rush to kill him because you might be scaring the wealth out of your home. Instead try capturing him alive and releasing him back into the nature.

This way, you might attract some good luck into your home and welcome a bit happier moments in your family life.

Grasshoppers as symbol in a Dream

Locusts are a very old and widespread insect order. One gets the impression that, just like the crickets, they live only to eat and chirp.

Because the chirping for the male grasshoppers serves as a call for the possible partner.

Many gardeners find the grasshoppers almost as a plague when they appear in large numbers.

The dream symbol “grasshoppers” shows the dreaming in the general dream interpretation his emotions, which he feels towards a person who has deceived him surprisingly. In addition, grasshoppers in the dream make clear to the dreaming that his long-awaited happiness, which has finally come, will not last long.

Unfortunately, after too much time, he has to be prepared for failures and defeats.

The dream symbol can also make the dreaming realize that he is worried about professional disagreements. Maybe this would be a clarifying conversation in the near future.

The capture of live grasshoppers in the dream symbolizes the retribution of a person who has no great power and no resistance.

Killing grasshoppers in a dream or a single grasshopper in the dream shows to the person dreaming that he will discriminate against another person in the watch world.

A female dreaming symbolizes the dream symbol “grasshoppers” that she gives away her love to someone who is not worthy of her.

A locust plague in the dream can be interpreted as a symbol of the retaliation for an injustice committed in the watch world.

On the psychological level, the dream symbol “grasshopper” is a symbol of freedom. At the same time, however, it points to absent-mindedness, impermanence and moodiness.

The dreaming therefore finds it difficult to decide on a cause or commit oneself in life.

The bouncing movement of the locusts in the dream also often symbolizes the erratic character of the dreaming in the watch world.

According to the psychological interpretation of dreams, the dream symbol “grasshoppers” can also draw the attention of the dreaming to dark spots on his soul.

For example, if he sees a whole swarm of locusts in a dream, this may be an indication of a serious mental illness. Locusts in dreams also symbolize short-term successes for the dreaming in the watch world.

However, he does not enjoy it for very long, because they are over faster than expected.

The dream symbol can sometimes indicate to the dreaming that he tends to depression and bad thoughts.

However, this does not come about through external influences, but can be traced back to the personality structure of the dreaming.

In the dream interpretation about grasshoppers, it is a symbol of a form of spiritual freedom.

In addition, the dream symbol can be interpreted as an indication of divine forgiveness or the exploitation of resources.