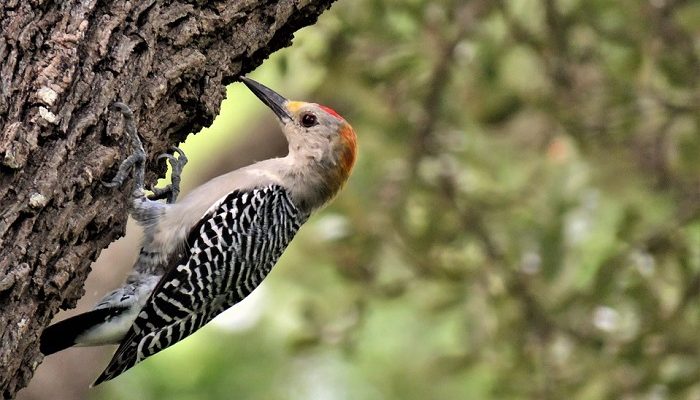 Lovely woodpeckers belong to a large family of Picidae birds, whose members live all around the world. These birds mostly inhabit woodlands and forests, although several species evolved to survive in areas with much less greenery.

Woodpeckers are known for their specific behavior, especially their ‘drumming’ skills. They use it to dig out insects and worms they feed on or to communicate with one another, especially as a part of courtship rituals.

Woodpeckers are small sized and remarkable for their characteristics. These birds are easy to distinguish from other families and species.

Therefore, their symbolism was created a long time ago and it grew specific and strong.

Woodpeckers are found in almost all parts of our planet and they are featured in many of world’s traditions, in legends, mythologies, stories and superstitions.

Most of woodpecker species have similar characteristics, in terms of their appearance and behavior. They often have black and white feathers and some red spots around their beak and head. Their colors have special significance, as well as their drumming skills.

Knowledge and intelligence – Woodpeckers are associated with being smart and searching for knowledge. Their pecking and digging habits symbolically represent searching for new discoveries and knowledge. That is why these lovely birds are associated with wisdom, as well. Woodpeckers are naturally clever and intelligent animals, which help them survive.

Woodpeckers symbolize cleverness and intelligence, because of their specific behavior patterns that secure their well-being. Their special calls are mostly territorial and play a large role in reproduction and taking care of their progeny. People value such skills and often consider woodpeckers a positive sign for future life.

Creativity and progress – Woodpecker motifs could stand for creative energy and constant development on a personal level. Colors of woodpeckers’ feathers have special symbolical meaning in that sense.

Their black and white coat reminds us of looking at life clearly and without doubts, which allows us to get to the next level of spiritual comprehension of the world around us. It means woodpeckers inspire us to do so. Red spots on woodpeckers’ heads represent intellectual and imaginative energy. 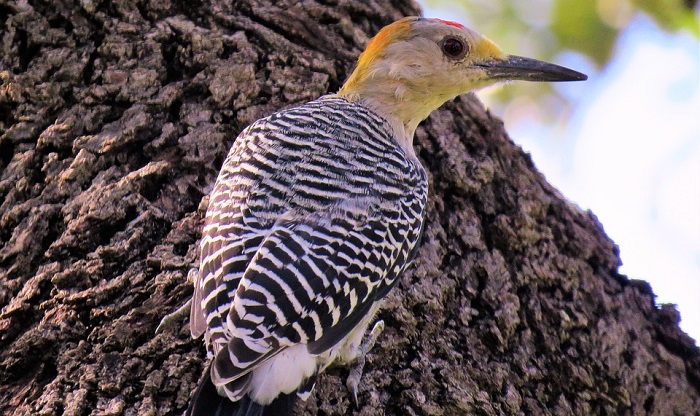 Life and spiritual energy – Woodpeckers drumming is associated with ‘heartbeat’ of the Nature itself. For Native Americans, this incredible bird embodies the concept of life, connection with Mother Earth and an everlasting energy that flows through all living things. Woodpeckers’ characteristic noise is identified with pulse of the Earth itself.

Woodpeckers are highly valued in Indian shamanic traditions. During shamanic rituals, practitioners would perform sounds similar to woodpecker’s drumming and wear its feathers, all in order to connect with spiritual forces of Nature.

Some Native American tribes believe wearing woodpeckers’ feathers makes the person able to talk to natural forces and control them, in a way.

It is believed woodpecker motifs and feathers are some sort of a medium with realms beyond our comprehension or imagining;

Noise and disturbance – Although it is believed woodpeckers’ sounds or simply their appearance bring good fortune and good news, some people find their drumming irritating. It is associated with noise and annoyance, in some cases.

That is particularly emphasized in interpretation of woodpeckers’ related dreams, for example. Woodpeckers’ sounds are associated with noise, irritation and constant disturbance.

Woodpecker as totem and spirit animal

Woodpeckers are particularly interesting totems. Woodpecker people are usually very creative and talented. They do not get life too seriously and know how to dig up the best things for themselves, without hurting others.

They are kind and lovely, being good friends and colleagues. Woodpecker individuals may sometimes be annoying and tiresome, but they are generally good spirited.

These individuals love to joke and make others laugh and feel relaxed. These are positive woodpecker people traits:

Woodpecker people often express great interest in creative things. They have good ideas and a specific sense of art. They love to learn and discover new things and use them to develop their natural skills. These individuals are innovative and able to apply their ideas in every aspect of life.

They use their creative energy to make dull things amazing and inspiring, so they easily get by and progress without much difficulty or exhausting effort.

Woodpecker people are extremely good talkers and very skillful with using words, in both written and speaking form. Jobs that require communication skills are perfect for them! These individuals could be inspiring figures and their speech could reach many hearts.

They are fun to spend time with and would easily make you laugh. They easily apply their communicative nature in both serious and funny matters. Woodpecker people could be amazing entertainers, but also influential spokespersons, such as political figures or PR.

These people are always headed forward. They do not believe in failure, but are not unscrupulous. They use their intelligence, knowledge and talking skills to reach their goals.

However, if they evaluate the situation as misleading, they would easily cut it down and dedicate themselves to finding another solution. Their creative Woodpecker totem energy helps a lot!

Woodpecker totem inspires people to do great things and use their natural gifts in order to succeed in life and get along with other people. However, they could sometimes be troublesome.

While Woodpecker totem communication gift is generally positive and useful, some people have to use much effort to control it. They could be annoying and talk way too much, completely neglecting others engaged in a debate.

They could get so selfish in that sense. You know those people who only talk, talk, and never let you speak your mind, but ask questions and give answers on your behalf? Those could easily be Woodpecker persons. Just learn to channel and balance this amazing gift of words mastery and you will be fine.

Woodpecker people have a lot to say and it is always interesting to listen to their stories. They do not talk foolish things, because they have a great knowledge. They make intelligent jokes and enjoy making other people feel good around them. They cannot do much to suppress their natural need to talk much.

However, you could always try! Your Woodpecker guide would help you with that, because it offers you this amazing gift for good purpose.

Woodpeckers are often featured in popular culture works, such as cartoons. They are usually portrayed as clever and funny characters that always get what they want and easily outsmart their enemies.

Woody the Woodpecker is probably one of the most popular pop-culture woodpecker character that made millions of children (and adults, as well!) familiar with this interesting and inspiring animal.

Woodpeckers are featured in myths and legends all around the world. They have special significance for Native Americans and are highly valued as totems or shamanic ritual animals. They are one of Native American zodiac signs and they have always been ascribed special, mystical and supernatural powers.

Here is a lovely Indian legend about how did Woodpecker returned water to the World.

Once upon a time, Water Keeper played some sort of traditional game with his opponents and lost all Waters of the World in a bet. It all dried out and all of Earth’s rivers, ponds and lakes went completely empty. All animals and people were in desperate search for just a drop of drinking water.

Water Keeper felt sad, because he knew everybody would die if they soon don’t find water. However, he did not know how to retrieve it. Four tiresome days had passed.

After that time, Woodpecker heard a strange noise, coming from a big cane, sized almost as a tree. He started to peck its surface, but then the noise became really laud and scary, so he flew away.

However, Woodpecker was curious by nature and he encouraged himself to go back and see what is inside. He started pecking the cane again, until its surface broke and Waters of the World flowed out!

All lakes, rivers and ponds were filled again and all of the World’s creatures were happy again.