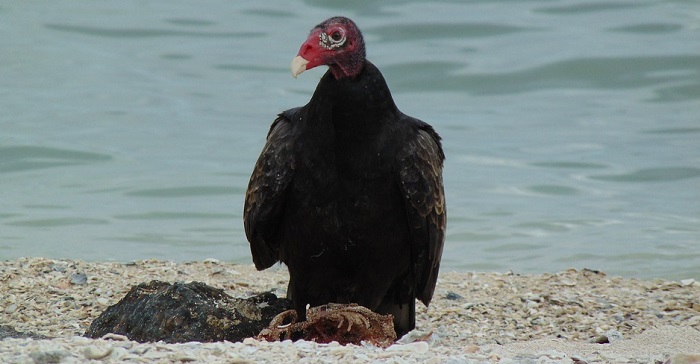 The most numerous member of the New World’s vulture bird family, turkey vulture flies over vast spaces of America, living around subtropical woods, near great fields, hiding in thickets and other semi-open areas of the continent.

Turkey vulture and its American cousins have nothing in relation to vultures of the Old World, although all species have something in common regarding their appearance and habits.

These birds are scavengers, meaning they eat things dead or dying. This characteristic makes all vultures somewhat scary and ominous to humans. There are many superstitions about them; most traditions associate vultures with death and misery.

However, these winged creatures are clever and careful. Actually, they are considered natural purifiers of the Earth. They have interesting and inspiring traits, talking about spiritual energy and totemism.

Generally, turkey vulture symbolism does not vary much between different traditions. All of vultures are commonly seen as bad omen and heralds of death and desperation, with several, but important exceptional examples.

Nevertheless, turkey vulture could be an amazing spiritual animal and guide. In following paragraphs, we will analyze their traits and symbolical meaning.

Generally speaking, most of traditions and belief systems around the world do not have much positive opinions about vulture family of birds. These animals are usually related to sinister, ill-omened, dark and dreadful things.

They are often depicted as messengers of the Underworld and Death. The most common superstition about vultures is present in many cultures and traditions and it says seeing a vulture means death, disease or other misfortunate phenomenon or event is near.

According to Ancient Persian folklore, there were two great vultures guarding the entrance of Hell, while in Greek mythology vultures are seen as keepers of secret lore about death and life. For magnificent Ancient Egyptians, vultures were birds of gods and they were seen powerful and magical;

All of traditional portrayals of vultures have something in common; vultures are often depicted as creatures of darkness and mystery, but they are also closely related to divine power and wisdom we people are unable to comprehend.

Intelligence and skillfulness – Turkey vultures are intelligent animals. They have to be smart in order to survive and they carefully plan their strategy. These birds live in large groups, but seek food on their own.

They are good planners and thorough explorers. Turkey vultures would rarely attack living animals and it could be said they feed exclusively on carrion of all sorts. They are sometimes seen eating some plants, but such cases are rare.

Turkey vultures have an amazing ability, very uncommon amongst bird species. They have extremely sensitive sense of smell, which they need in order to find dead animals they eat or carry to feed their young ones.

This incredible characteristic makes turkey vultures a great exception within bird genus and interesting creatures. They use their brains in combination with this super skill, in order to provide food and raise up their little ones.

Watchfulness and awareness – Vultures are often associated with watchfulness, although this trait is usually depicted as something threatening. Turkey vultures share this trait with their relatives. These birds are careful, watchful and patient.

Having in mind they are scavengers, these creatures nurture their natural stillness and awareness. They are able to sense and catch sight of their prey from great distances. Turkey vultures have to be clever, skilful and patient to get that prey.

Sometimes, they would hunt some small prey animals on the ground. However, they are not good ‘walkers’ and they have to bi still and silent to catch it. They are ready to wait and observe situation and are aware of their environment and circumstances.

The same is with getting carrion. Such prey is always a target for all sorts of hungry creatures, so turkey vulture has to be extremely watchful and carful to get it.

Cautiousness and carefulness – Although turkey vultures do not have many enemies in their natural habitat, these birds are naturally cautious. They want always to be sure they are not under a threat of predators, no matter how few they are.

These birds have rivals in other species of the same eating habits. These animals would fight over the dead prey, so turkey vultures have to be very cautious.

These birds are able to properly evaluate the given circumstances and situation. This quality is not so common in animal kingdom. They use their intelligence to outsmart other animals and get the food for themselves and their young ones.

Vultures are not tricksters, but good strategists. Symbolically they represent the importance of cautiousness.

Survival and resourcefulness – Turkey vultures are natural born survivors. They are biologically and evolutionally designed to survive by eating things that are dead, which is kind of repulsive, but convenient trait.

While other creatures hunt their prey, vultures would feed on dead or dying animals. It may sound simple, but they also have to take great effort to find and get such a ‘meal’. You could only imagine how incredible their organisms are, having in mind they eat something that is decaying.

This is a characteristic people often find disgusting, but it makes vultures extremely resourceful and resistant creatures. Turkey vultures are a great example of the family, since they feed exclusively on carrion.

There are exceptions in some cases. Turkey vultures are symbol of survival and endurance. This ability to eat dead things makes turkey vultures symbolically associated with concepts of Hell, Underworld and dark things in general.

Turkey vulture and vultures in general represent powerful spirit animals and totems. In that sense, vultures’ sinister characteristics along with qualities mentioned make an impressive combination of symbolical meanings and guidelines.

This amazing creature is associated with fluid borders that separate the world of Living from the realm of Dead. They are often seen as messengers from ‘beyond’, which could be interesting and useful if you are a Turkey vulture person.

These are main positive traits of Turkey vulture or Vulture people:

Vultures are associated with mystical things. As totem animals, they help us find our inner strength and channel it in our own advantage.

They teach us to be patient and watchful, in order to seize right opportunities in life, to develop our natural skills and reach our goals.

Vulture people are usually smart and very intelligent and they are able to evaluate the situation they find themselves in. They plan carefully and act quickly. These people are handy, clever and strong willed.

These people have brilliant brains and are usually analytical. They express good sense of tactics and strategy, so they are worthy team members.

However, they keep their individuality and could even appear eccentric. Nevertheless, they adapt to social situations very well and are easy to talk to and cooperate with. These people also express a high degree of tolerance and are never easily upset or pushed out of their track.

Traits of Turkey vulture people that could be interpreted as both positive and negative are:

Introspection is a good thing, in general. However, Vulture people could become too introspective, considering their tendency to be extremely analytical.

This combination sometimes makes them extremely calculated and obsessed with their own emotions and thoughts. They tend to calculate everything they feel or do, which might be frustrating for both themselves and other people.

Another trait of Turkey vulture people is shrewdness. This could be interpreted as good trait, because it makes them able to get through hard times in life without many resources. On the other hand, they could grow stingy and count every coin they have.

They could become selfish individuals, who find it difficult to share things with other people. They tend to get only bare necessities for survival alone. If you balance all the gifts your Turkey vulture totem grants you, you should be able to avoid this undesirable direction and become a great personality, appreciated and loved.

Did you know the actual name of this bird is Golden purifier? Turkey vultures are classified under the name of Cathares aura, which is derived from Latin terms for purification and gold. We would hardly associate this creature with purity and golden glow, but its real, natural purpose is to clean the land from filth.

In its specific manner, turkey vultures purify vast lands and provide healthy and clean environment for other living beings, including human kind.

For Pueblo Indians, Turkey vulture represents purification and it is highly valued in their shamanic tradition and shape-shifting rituals;

Vultures are powerful alchemic symbol of sublimation, because they are often seen as mystical creatures able to communicate with hidden forces of life and death;

In Zoroastrianism, vultures represent purification and connection with heavens, because Zoroastrians practiced sky burials, meaning they would leave bodies of their dead for vultures to eat flesh from their bones and thus make their souls free to enter the heavens;