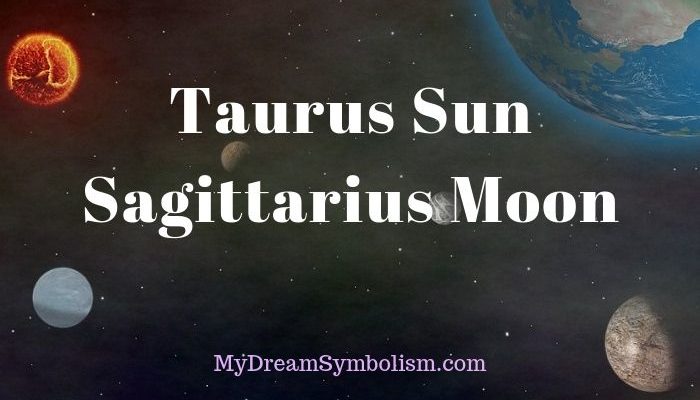 People with the moon sign Sagittarius and Sun in Taurus are optimistic and happy. They love life and with their enthusiasm they bring their fellow humans with them.

However, they are not particularly sensitive and emotional.

Well-born and compassionate feel with the moon sign Sagittarius when they can travel to distant lands.

They want to broaden their horizons and chase after their dreams.

You love people a lot, as long as it’s the right one. You prefer to stay home alone, with a good book, rather than getting bored in the company of people you don’t like or surrounding yourself with people you consider ordinary or uninteresting.

You move with ease in any environment because you know how to say the right things at the right time, and the touch you show in your relationships with others contributes greatly to your success, which depends on your numerous contacts.

You are an excellent manager, teacher, or lecturer, you have a clear and direct way of expressing yourself and your decision and sincerity immediately go to the mark (it cannot be denied that your Sun in Taurus and your Moon in Sagittarius have forged you strongly, strong and magnetic).

The extreme obstinacy of your nature is expressed in an accommodating way: you always manage to deal with the topic in a vague way, though never losing sight of the core of the matter and finally reaching the desired conclusions.

You have very high principles that you don’t give up at any cost; an unexceptionable moral sense, both in your personal conduct and in an abstract search for truth, makes you, who have the Sun in Taurus Moon in Sagittarius, a moralist, and probably stand as a judge of your friends and neighbors albeit with them you would never let a word of what you really think escape.

But in your heart you criticize them and, towards the transgressors of the rules of good conduct and civilization, as you understand them, you show poor tolerance.

You’re a bit of a gossip, you love a good story and don’t hesitate to report one at the first opportunity. You are also an attentive listener, especially if the topic you are talking about interests you personally. 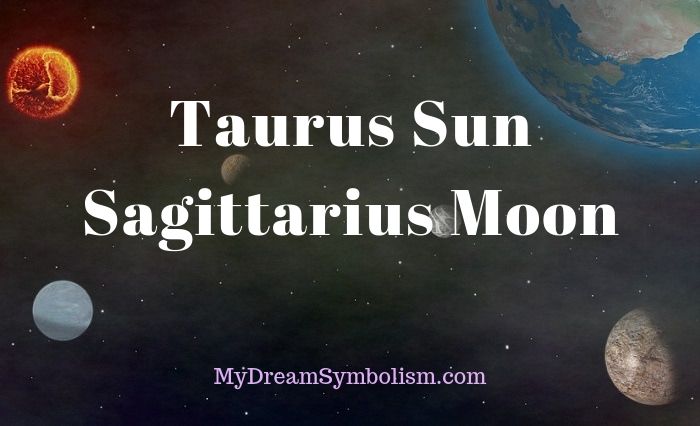 A good number of your sins are lived through those of others, thanks to the great talk you make of them, and in censoring the horrible faults committed by them.

However, you adopt the convenient way of conventions, so pleasantly reassuring and so much easier to follow as compared to the tormenting path of the rebel.

The most important constellations in the chart are sun, moon and ascendant. The intense view of the position of the moon in the sign of the zodiac, according to astrology, can give us a wealth of knowledge about the horoscope owner and also give us clues about his behavior in relationships. It is also interesting how the moon affects the shooter when we are a child.

The man with the moon in Sagittarius also has in the horoscope idealistic, enthusiastic and optimistic feelings, in which he also likes to participate in his environment.

On the other hand, he also cultivates his own person, is self-righteous and can be intolerant and know-it-all. Usually, however, he has a strong sense of justice and also works for the rights of others.

The moon in the shooter has the need to recognize. Everything that has to do with knowledge, such as religion, philosophy, spirituality, and therefore also the ideas of foreign cultures, appeals to him fundamentally. In order to arrive at the realization, the moon in the shooter is capable of large movements. These movements can be inside and / or outside.

Movements of the interior can arise through meditation, dream journeys or imagination. The movements in the outside would then perhaps be long journeys or sports activities.

The Sagittarius only gains wisdom through life experiences, so it is very likely that his search in the first half of life will bring him more outward. Only after completing his search does he come to self-knowledge.

Similar to the moon in the lion, the Sagittarius Moon has the need to be special and stand out from the crowd. This urge for individuality can lead to the strong training and exaltation of one’s ego.

The great movements in the inside and the outside are supposed to give the human being with the moon in the shooter a larger overview.

From this he draws his conclusions, which he usually abstract (and often likes to rashly). These abstractions become a kind of laws that the Moon in Sagittarius then gives as “his” insights. The Sagittarian Moon has a need to teach, and he may do so unless other factors speak against it.

If the previous Scorpion Moon felt the need for emotional intensity and drama, the Sagittarius Moon in the sign of the Zodiac rises above these all-too-human dependencies. Deep inside, man feels Sagittarius Moon as something special, born to something higher.

His goals are noble, his motives noble, and his actions moral. “Sagittarius” symbolizes freedom, vastness, greatness, prosperity and optimism, and so we also find these values ​​internalized in people with this correspondence.

The feeling of being special and of earning something special in this life, according to the karmic explanation, springs from the memory of past incarnations, in which the horoscope owner had a higher social position, prestige and wealth.

As a child, the Sagittarius Moon tries to be as good as possible. He longs for admiration and popularity, and for that criticism hits him all the harder.

His tolerance for frustration is very low in that respect, for he is deeply attached to the feeling of his own particular value, and is less able to understand when others do not recognize him and question his actions.

In pregnancy, the mother often experiences a time that is not easy, be it partner conflicts or financial problems that leave her with a lot of emotional ups and downs, although she is very much looking forward to the child and enjoying the pregnancy.

However, the child experiences the alternation of maternal feelings on the subtle level.

Later, this manifests itself in sudden, seemingly out-of-nothing mood swings, in concentration disorders, and sometimes in drug use to restore the prenatal emotional state. The Sagittarius’s tendency for “much and in excess” is also manifested later in the Sagittarius Moon-born in exaggerations and in a certain maladjustment of the banality of life and the restrictive rules of society.

The mother experiences the Sagittarius Moon-born with a positive attitude to life, she is one who promotes her child and allows him freedom, just as she also needs a lot of space and dedicates herself to the questions of meaning rather than the rag or the wooden spoon.

Later, this person also seeks something special in the partnership, the different, not infrequently he falls in love with a person of other origin and culture. He wants emotional closeness and affection, and at the same time freedom and independence.

Just like the mother once, so now the partner or the partner should give him the feeling of unrestricted affection and specificity. It goes without saying that this attitude provokes conflicts.

The Sagittarius Moon-Born learning task is to practice modesty and not become the measure of all things. To accept the attitudes and attitudes of others, to feel that they know better, let go and give way to respect. The joviality, magnanimity and basic optimistic attitude of the Sagittarius Moon will give him a good support.

Hard enough to have to devote to profane things in this lifetime. Often it is difficult for the Sagittarius star to use its goals consistently and with all its might, since it expects inwardly that it deserves a certain luxury and standard of living, as well as the space it needs to breathe.

Unfortunately, life is hard, cruel and unfair. This makes the Sagittarius moon hard to fight. Injustice in particular causes him almost bodily pain, so fine is his sense of justice and his deep moral attitude.

As a partner, we do well to practice tolerance and let our partner “do his thing” with the Moon in Sagittarius. With incomprehension and limitations, we will only expel him, but certainly not achieve what we want.

If we can even share in some areas the enthusiasm of the Moon in Sagittarius and go along with some of his movements (travels), then we have a living and exciting relationship ahead of us.

Their desire to travel and their desire for freedom and independence must then must be accepted by their respective partners.

He should also bring a great urge to move, so the trips to foreign countries can be undertaken together.

It is also important to people with the moon sign Sagittarius that his partner has the same intellectual level. The spiritual exchange with each other is invigorating and enriching for him.

Although they also believe in great love, a comradely, equal and moving relationship is more important to them first. Best match for this person is someone with a Moon in Zodiac sign Aries or Leo.

The Moon in Sagittarius has the fundamental need to gather knowledge. He can do all possible fields such. Religion, philosophy, the ideas of foreign cultures.

To get to the realization, the shooter / moon is capable of big movements. These movements can be inside and / or outside. Movements of the interior would be e.g. Meditation or imagination.

Those of the exterior would then perhaps be further travel or sport.

Sagittarius needs to be special and stand out from the crowd. This urge for individuality can lead to the strong training and exaltation of one’s ego.

The rather larger movements are supposed to give the human with the moon in Sagittarius a larger overview. From this he draws his conclusions, which he usually abstracts (and willingly rashly).

These abstractions become a kind of laws that the Moon / Sagittarius then issues as “his” findings. The Sagittarius / Moon has the need to teach, and he can do so, if not for other factors.