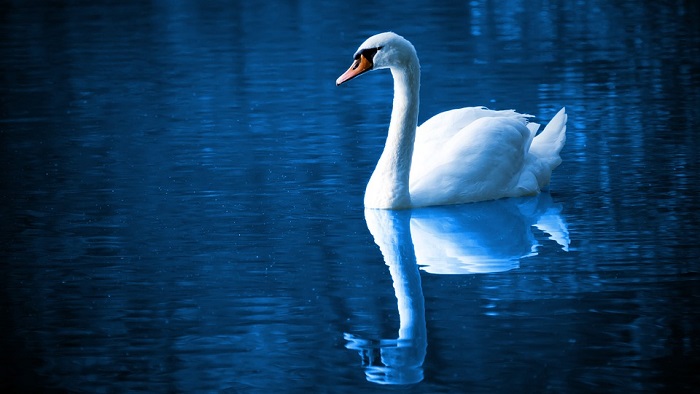 Beautiful, delicate and gracious animals like swans have always had special significance for people. These charming birds simply represent all the things we people find amazing, magical and attractive.

No wonder swans are often featured in fairytales and poems, all around the world. These fairy animals have won our hearts a long time ago and they still continue to inspire.

There are many legends and stories about beautiful swans. Different traditions all around the globe have their own folktales, fairytales, beliefs and superstitions about them and, no doubt, swans have specific symbolic meaning in many cultures.

Their characteristics make them special in symbolical and spiritual sense. Their close relation to waters and Water element make them powerful symbol of all life.

At the same time, swans symbolize solitude and isolation.

Because of swans tight bounds with water and air, which are essential elements for overall life existence, swans represent the existence itself;

Can swans fly? People ask this questions many times. Swans love water and they fly fast, so these beautiful birds represent true connection between waters and heavens.

Thus, we interpret their symbolism as an important link between the two vital elements of overall existence. These ideas are in close relation with concepts of nature waking, regeneration and flow of life energy, so swans symbolize life in many cultures around the planet.

Swans magical appearance and characteristic behavior made it symbol of connection between our earthly world and realms beyond our imagining.

In Ancient Egypt, swans were believed to carry the souls of the deceased to their afterlife;

Swans in traditions around the world 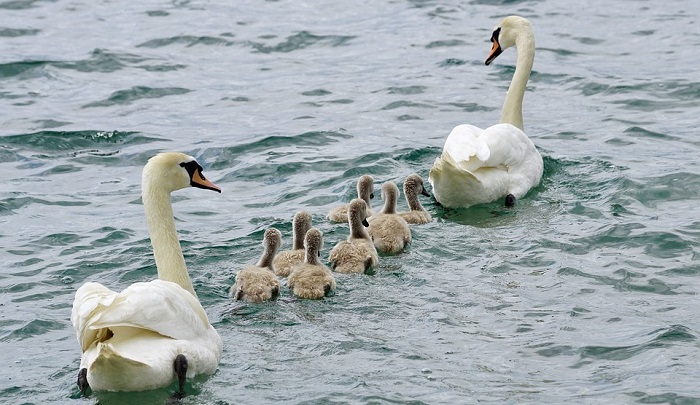 Swans are truly magnificent creatures that have been inspiring people since past. In many cultures there are numerous mythical tales and legends about them.

Let us tell you some of the most interesting ones, in order to better understand overall swan symbolism and spiritual power.

Later on, we will talk about Swan totem powers and what this beautiful animal has to offer to you as your spiritual life guide.

In Ancient Greece, people believed magnificent swans were connected to the god of beauty and Sun, the mighty and adorable Apollo. Swans were commonly depicted beside Apollo’s favorite musical instrument, the melodic lyre. Another lovely deity was associated with swans.

Charming goddess of love, enchanting Aphrodite, had a carriage decorated by a swan motif. Sometimes, Aphrodite is portrayed sitting on a swan’s back or riding this magical bird;

Even the almighty Zeus, the ruler of Greek pantheon appreciated swans. It happened that he used the form of a beautiful swan once, in order to get close to queen Leda, the wife of the Spartan king, whom Zeus was in love with.

There are stone sculptures representing lovely queen Leda and Zeus in shape of a swan.

Ancient Celts also identified swans with the Sun and all sorts of beautiful things, such as music, love, purity and human soul. They believed swans possess healing powers and are able to use and channel energy from the Sun in order to apply these powers.

They also had special interpretations of swan songs and they thought these melodies are magical. Celtic mythology and folktales tell about swans changing to human form. They believed heavenly beings that for any reason needed to come down to earth would often transform into form of a beautiful swans.

Celts myth tells about a pair of swans pulling the Sun carriage across the skies;

In Nordic mythology, swans were associated with mighty Valkyries, war goddesses whose task was to carry souls of fallen warriors to Valhalla.

Nordica tradition tells they were able to shape shift and use form of swans. They would sometimes take off white feather from their equipment, but if a person has stolen it, they were obliged to obey them.

One of the most powerful concepts upon which Slavic mythology is based is the cult of ancestors. Slavic people believed swans embody souls of their ancestors and carry messages from another world they dwell in.

Slavic folklore is abundant in tales about fairies who can shape shift and transform into an animal form. They believed fairies and mythical beings could use forms of wolves, snakes, falcons and other animals, amongst which swans were also one of the favorite choices.

Hindu and other beliefs

In east, people think of swans as symbols of nobility, grace, elegance and bravery and consider them sacred and divine animals. According to Hindu tradition, a long time ago, the Supreme Swan had laid a golden egg from which Brahma, the mighty Hindu deity was born.

Walls of Hindu temples often feature picturesque sights of Brahma riding a golden swan. One of common Hindu temple motifs is also a sight of a couple of swans feeding on honey from bloomed Lotus of all knowledge;

Christian people sometimes associate swans with Jesus Christ. There is a constellation in the Milky Way that is called the swan and this heavenly picture is sometimes identified with Jesus carrying his cross.

When we think about swans, we imagine either white or black ones. While white swans have positive symbolic meaning almost all around the world and are associated with purity, light and grace, black swans are often identified with darkness, mystery and occult properties and magical powers.

Dark swan – Black swan explanation does not vary much. Generally speaking, black swans always represent an exception or even an anomaly (even if they are not as rare, as one might think!).

Opposed to their white relatives, black swans are seen as such – white is for purity and light, black is for darkness and shadow.

Black swans are usually associated with darkness and even malice. They are often opposed to light, white ones, such are characters from one of the historically most famous ballets, Tchaikovsky’s enchanting ‘Swan lake’;

Black swan motif is also used as a metaphor for exceptions, odd and unexpected things, those that stand out in a negative or at least specific way. However, you might find black swans elegant and beautiful, of course!

Long time ago, Europeans believed there are only white swans, because they have only seen those. Once overseas communication had been established, through different media, such as photos and accounts, they’ve found black swans are not a story and they do exist in Australia;

Swan love – You probably know swans are ultimate symbol of an everlasting love and devotion. The magic is obvious; when a male swan and a female swan come together, their union usually last for life.

Dreams about swans are often interpreted as messages of love, especially for those who have partners. If a dream is pleasant and leave you optimistic and in good mood, it means your love will be strong and lasting.

Swan beauty – You are all familiar with a tale about the Ugly duckling. As you know, the duckling from the tale that was so ugly no one has loved him was actually a young swan. Young swans are not nearly as beautiful as adult birds.

They do not look like swans at all. Once they grow up, they get their elegant, astounding form. This transformation is another symbolically significant thing about swans. These birds represent transformation, change, blooming and beauty.

Swan song – Swan song is a metaphor you would occasionally hear. This expression is commonly used to describe someone’s last significant work before they have died (at the end of his or hers artistic or scientific work, for example). The expression is used because these wonderful and amazing birds are known for their natural habit to sing their last and the most wonderful melody upon their own death.

If we summarize all the ideas about swans’ symbolism and spiritual meaning, we could say these wonderful creatures represent many good things, with as exception of a dark swan that has specific meaning.

Swan as totem and spirit animal

Swans are a true gift for people born under this magical totem. Swans embody all the qualities people find valuable, attractive and desirable.

Swan totem is specific one. People whose spiritual life guide is this beautiful creature possess some of the following traits.

Swan people usually lead a harmonious life, without much trouble. It is because they are very good in evaluating situations they find themselves in and know how to deal with problems with patience and intelligence.

Their approach to life is optimistic, balanced and well thought out. Swan individual look upon others with grace and kindness, so they do not attract bad energy.

Sometimes, they could be too proud spirited, because they know how amazing, charismatic and beautiful they are to others.

People born under Swan totem love art, they have delicate taste and are true born aesthetes. They are classy, fashionable and creative.

Swan people are passionate lovers that give all of their hearts and souls to one another. Swan couples are probably the ultimate example of what the true, life lasting love is.

They are extremely devoted to their partners, but they are not jealous, because they have full confidence in one another. They also show great love for their children and are kind towards their friends.

Swan people act intuitively and they do it good. They are not easy to seduce, outsmart or manipulate. Those individuals have their goals and are ready to completely dedicate to them.

They are very self-reliant and they love to spend time alone. Not that they are not sociable, but they are kind of people who need special time just for themselves.