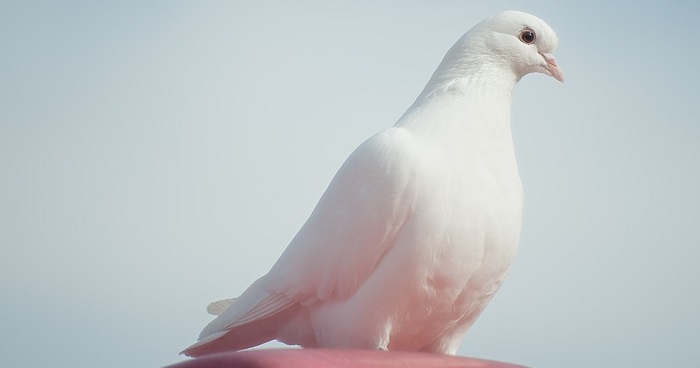 Even in ancient mythical tradition of the various religions, the pigeon plays an important role. In ancient Greece, it was worshiped as a love bird, the goddess Aphrodite considered it to be sacred. In the Germanic tradition, a dark pigeon was considered a bird of death.

In the Judaea-Christian tradition, the origin of the special meaning of the dove is probably due to the story of Noah, who sent a dove after the Flood, which returned with an olive branch. It became a sign of reconciliation between God and man. Noah’s dove, flying over the waters of the flood, is figuratively interpreted as God’s Spirit, hovering like a bird over the flood of the beginning.

Christian art uses the image of the dove wherever it is spoken by the Holy Spirit, even though in other biblical stories only a very few passages speak explicitly of a dove in this context.

As a symbol of the Holy Spirit, the dove appears on depictions of the Pentecost event. And in scenes of proclaiming the birth of Jesus, the Spirit comes in dove shape to Mary. But also in representations of the Trinity, the mind is represented as a dove between the two persons of father and son.

The only New Testament passage where the dove is expressly mentioned in spiritual contexts is the account of the baptism of Jesus, when he sees the spirit coming upon him like a dove after baptism. It is clear here again the close connection to the water. The water of baptism, linked to the idea of ​​washing away sin, is reminiscent of the waters of the Flood.

In addition, the dove attains an independent meaning in pictures of early Christianity as a symbol of the baptized Christian, or even of the martyr.

Origen compares the eyes of the spiritual man, whose “spiritual view” is entirely directed to God, with dove-eyes. In this sense, the dove is also a sign of Christian simplicity, a symbol of purity, love, faithfulness and virginity.

The dove plays a major role as a symbolic figure in the representations of art of all time. In our time, her peace message comes to the fore again. It has become a symbol of peace for us, across all political and ideological borders.

The pigeon is often shown as white and gentle. The symbol of pure-bred pigeon is present in many cultures, and all the beliefs associated with it generally have positive meanings. White pigeons are symbols of new beginnings, peace, loyalty, love, happiness and prosperity, and their release is a tradition that has been associated with ceremonies, rituals and celebrations for centuries.

White pigeons are symbols honor, peace and love. these beautiful birds are also symbols of the Holy Spirit which is why they are often mentioned in the Bible whenever something important is about to happen. In the New Testament, the white pigeon was mentioned during the baptism of Jesus Christ on the Jordan River, when heaven was opened over it, and the Holy Spirit flew as a pigeon. It can also represent Virgin Mary.

If you ever saw releasing of the white pigeons at political events it is because this beautiful bird is a symbol of peace and it is therefore often used for such events. It often appears on drawings, posters and signs on events that promote peace, such as the Olympic Games, protests against violence and pacifist literature. 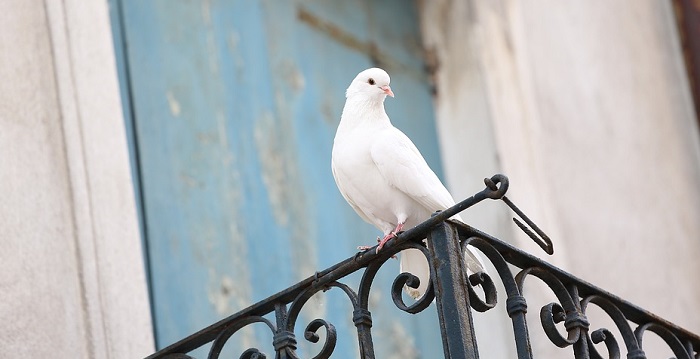 The white pigeon is a symbol of birth and marriage, and even today during the wedding ceremonies, the newlyweds release two white doves together. It is believed that marriage will be very happy if they stay together after the flight. A very favorable sign is the arrival of a white pigeon to the place of celebration.

The release of white pigeons is peace, prosperity and success. That’s why they attend every important event, such as graduation, religious ceremony, even a sports event and a concert.

Bird birds are known to be scribed and considered to serve as the messengers of heaven. In Feng Shui, the ability to fly high into the sky is associated with the ability to reach as close to heaven. Pigeons fly far and high, sending messages but eventually they always come back home where their oasis and the gaze are in the embrace of their beloved partner.

The story of Love

Symbols of love such as pigeons or mandarin ducks should always be placed in pairs representing a man and a woman in love affair. The couple’s dove activates the energy of partnership. Whether it’s a picture or sculpture that represents doves, their energy will bring loyalty, peace and happiness to your home and marriage.

It is thought that a pair of pigeons as a symbol in your bedroom brings double happiness, gentleness, romance, and eternal love. In Feng Shui, the pigeons used to be used as a love remedy for long and peaceful marriage. It is believed that the pigeons were beloved birds at the Chinese emperor’s court because of the calming effect of their teasing.

Seeing a Flying White Dove in Front of you

White doves are generally a symbol of love, innocence and joy. These birds are going to bring you happiness and joy in life, so anytime you see a white dove there is a good chance something good is about to happen to you very soon.

White doves in general are beautiful creatures, so even seeing one for a moment is a true miracle. They are pretty rare in white color, so you should be happy that you had a chance to see one.

White dove, if you believe in its symbolical meaning, is going to bring you love and peace in life. Nature is by itself a miracle, and many beautiful creatures live in it, that should be our inspiration.

Therefore learn from the graceful dove and live by its thoughts.