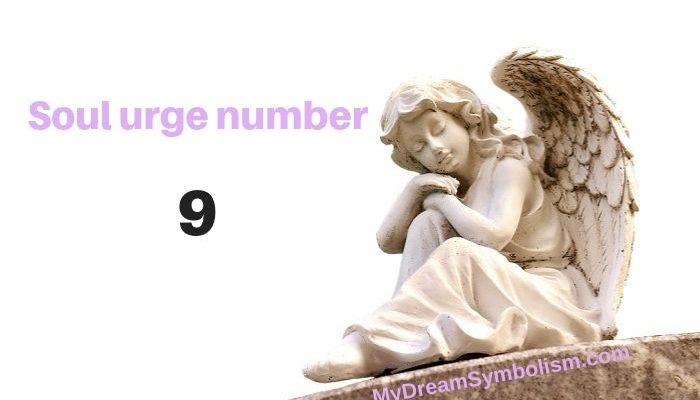 Now, the majority of us are aware that the world is created from the energy and that, according to that premise, we are vibrational beings.

In fact, all that surrounds us is created from the energy, and that we influence one another with them and in the same way, numbers also affect us with their vibrations.

So, the secrets of the influence of numbers, especially through the soul vibration was first discovered by the Chaldeans (inhabitants of southeastern Mesopotamia around 626 during the time of the Chaldean kingdom), later incorporated by Jews and Arabs in their numerical system.

Regardless of what system you prefer, the basis is the same, and the central vibration is dedicated to the Soul, as the central spot in our existence and time that we spend on this planet.

Today we are looking into the Soul Urge Number 9, with an honest attempt to look for the purpose of these beings who are this Soul Number.

What is the meaning of the Soul Urge Number 9?

People with the Soul Urge Number 9 are well-meaning, broad-minded and contemporary beings who are seemingly born with a lot of wisdom, and it is like they carry it from the past lives. They always look and behave older than they are actually old, and they are often regarded as people with an old soul.

They are very knowledgeable and have such a brain that can understand so much and can suck inside all information in the world, just like a sponge. The capacity of their mind is endless – and, unlike many others, they are aware of this fact.

They are not possessive, but they are sensitive to unanswered love from anyone and anything – often they use the term Universal Love, and emotions are not just reserved for their lovers. They have a good intuition that greatly helps them find the right partner, despite the fact that they somewhat independent human beings, who are primarily aware that strength is inside them.

These are the people who are able to put love above all other things in life, and who love others because of their essence, not anything else, and in the same way, they can be conquered by real human qualities.

What is even more relevant in this story is the fact that people who are Soul Urge Number 9 always put emotions above material interests, or, in fact, any other interest they may have.

For them, love (the biggest love of all, the universal love that is more than we think) is not only a common life but much more than that. 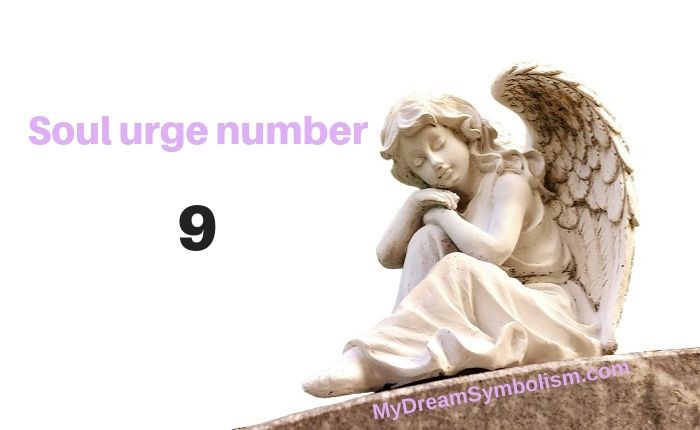 These human beings are truly able to connect to the other parts of their minds, and therefore, to understand other types or forms of love.

Maybe this is their biggest value (unlike many others, these people are quite able to understand such a fact and use it to the fullest).

What is the symbolism of the Soul Urge Number 9?

We will take both of these impacts into consideration, and say that they are humans who have such a pronounced heart and are loved to the extreme (secrecy an almost pathological ability to love are a combination of Mars and these two other planets).

Because of emotions, they can be unrealistic and react emotionally to the events that come in their way; and what the planet Mars brings into the picture is that it makes them brave and persistent, but they can be abrupt (not always, but at times, when they are younger maybe).

Now, if we are looking into the impact that comes from the Neptune and Pluto, it makes them moody, so they can hardly accept criticism, or loss. They have a strong sense of responsibility and are good workers; overall, there is no doubt about it, especially if they find what they love to do if that purpose is deep inside.

Although considered by many to be rough and heavy on relations with other people, it is not that, it more of the fact that they are misunderstood, and they remain still deeply sensitive and gentle.

When you look deep into their Soul, if you find out what is their creational force, these human beings who belong to the Soul Urge Number 9 are very loyal, cordial, like to lead the main word, hardworking in its persistence. And when they leave others to use them, believe that they are doing it purposely, and if they are doing someone a favor, they will never get quarrelsome, or angry, they are doing it with their full hearts.

Maybe they can seem as self-centered; they love to travel, and what is more important they are constantly improving themselves.

This is such an important thing to know about these people who are ruled by the Soul Urge Number 9.

We have said that people who are Soul Urge Number 9 are under the numerous planetary impacts, and in this sense, their lives regardless of the amount of success can be tested in some ways and for that matter, their health could be jeopardized at times.

These humans can struggle a decline in immunity, and since they are so smart, they often confuse themselves about what is going on in their bodies, so they often get misdiagnosed.

They may have severe symptoms that will never return again, but still, they can become obsessive about their health, believing that they cannot make a mistake and that they know it all.

This is why many of them decide to get involved in the area of medicine, and when they should help other people, they are successful.

Often times these people choose some reclusive, but noble jobs, where they can show off the vastness of their talents. They are seen as dignified human beings that are mysterious, so potential lovers have a hard time approaching them in a first place, and they often spend time alone (not because they want it).

When in love, they can show how great people they actually are – powerful, educated, persistent, stubborn, no one can move them out of the way that set in front of them.

There can be quarrels, and their lives can be involved with numerous controversies, but they simply do not care, since they have strong inner strength.

Advice for people who are Soul Urge Number 9

We have said that people of the Soul Urge Number 9 are old souls, and they also can feel the burden that came from their past lives.

They have viewed the world as a disgusting place that is full of disharmony, distrust and greed, and they are sent into this world with the intention to change it for better.

To do that, it is truly relevant for these human beings to know and learn what they have done wrong in the previous period/ lives.

Then, they were not able to see beyond the shadow of life and found it difficult to remain positive about life and the condition of the planet (people of the Soul Urge Number 9 think of global issues very often, unlike many others).

This may have been due in large part to the fact that they had a deep spiritual awakening that resulted in the sense of emptiness in the physical world – they can wake up and have an awakening that wakes up all of their spiritual strengths.

It is the main advice that these human beings observe life in a way that they came back to it with the purpose to reconcile all things that were bad, even rotten to the certain extent, find joy on Earth and find happiness in physical form as well.

Also, people of this Soul Urge Number 9 should be aware that they have returned with to divert their consciousness from negativity and to start making positive changes, personally or in the community what is more important, and all of that through spiritual and humanitarian work.

It is truly relevant for them to understand that should be their purpose in life, as the only possible way of the discovery of their talents and strengths.

Above everything else, people of this Soul Urge Number 9, are so blessed, they are intelligent and intuitive humans, which is a winning combination for success in life, and their success is never a small or moderate; it is usually big, and it changes the environment.

Unfortunately, they do not know how to use it wisely always, so it is advisable for them to be aware of their problem – often seen in poor communication, information sharing, which sometimes leads them to misperception. Listening to others is often a piece of good advice for them; they do not know everything the best.

They are attracted to the money, but they will not be easily enriched; they are trying to live by the rules that their Soul sets for them, and that is never to put an emphasis on the material wealth, but if it comes, it is a welcome addition.

In the end, if they do have an opinion on all things in life, but this does not mean that they are right all the times. They should become more relax and to become attentive listeners and observers. They will see a wonderful world.