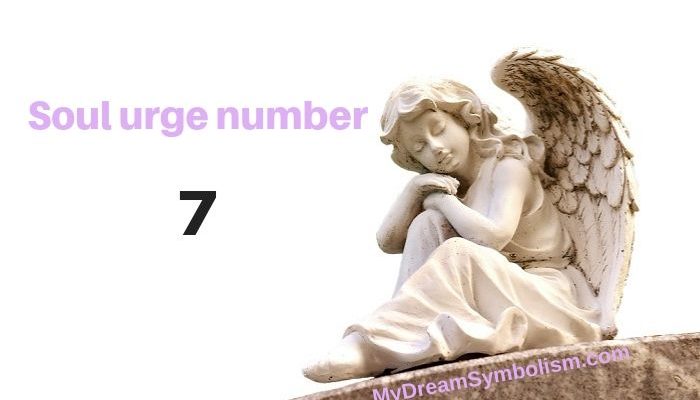 We also make many mistakes and abuse the gifts and talents we have received from higher powers, we do not see them, we do not nurture them, and this is one certain way of how people lose their true purpose.

To correct such mistakes, if we wish, we can make the extra effort to learn a particular lesson that we have missed in some previous period, and the perfect way to do it is by using numerology and all of its benefits. And there is one number that shows you that lesson, and it is called Soul Urge Number.

For this reason, it is very important to understand the instructions given to us by our Fate of number and apply them in your own life.

This is one major opportunity that is not available by any other mean, tool or method; in this sense, you should open at least a little bit toward this opportunity, and you will testify how much your life is going to change for better. You will be pleasantly surprised with the results.

What is the meaning of the Soul Urge Number 7?

People with this Soul Urge number are secretive, withdrawn and very closed human beings, but also those who have so many things hidden inside, that is often in complete opposition with what they show at first glance, so, in some way, they are very interesting characters to look at.

They have a hard time expressing their feelings and are very mysterious about the opposite sex.

For many people who belong to this Soul Urge Number 7, it may seem disinterested and indifferent – they may look like human beings who are not interested in anything and anyone else but their own inner world.

On the contrary, in fact, it is not so, because they hide an avalanche of emotions that cannot be stopped when triggered – it is just an image that they want to show to the world, or it is the way that others see them.

Whatever the case is, these human beings have such an impact on their environment, and they win something from it and also lose; so we will not say that this is a good or bad thing, it is a fact of life.

In the end, people who are Soul Urge Number 7 are such personalities that they do not leave anyone indifferent, because when they love deeply, then it is true and unconditional love that cannot be found in any other aspect in their lives. 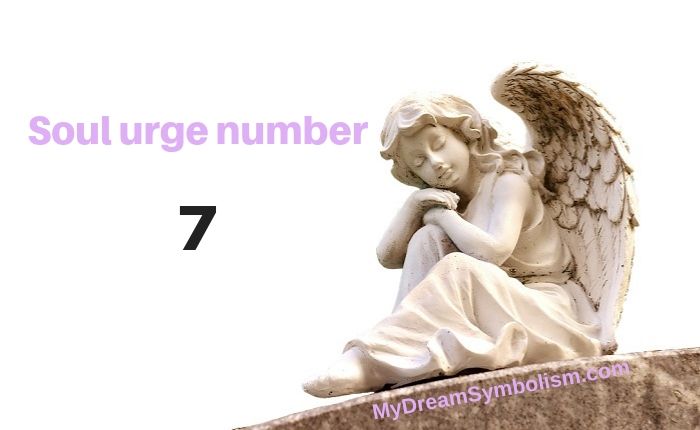 In fact, we are talking about the depths of their feelings that are beyond any compare and in that sense, they are unique persons.

All in all, people with this Soul Urge Number are without a doubt, very intellectual, interesting, mystical, nervous, closed in themselves, often change moods, and this could be unbearable for their surroundings and can struggle so much to find their place in the world.

In Love, they have numerous problems, and if they are in a wrong connection they find it hard to break up, struggle to keep the person they love, though often and in marriage, they feel lonely and misunderstood. And, in this sense, emotional life, and the exploration of this should be a starting point for their change.

What is the symbolism of the Soul Urge Number 7?

The planet Uranus is the symbolical ruler of the people who are Soul Urge Number 7, and this means that their most pronounced characteristic is spirituality, along with the high intuition. This is their tool to go through life and become very successful if they want it.

Because of the symbolical clairvoyance, especially sensitive and delicate but inclined to the material aspects of life, and for some this may like aspects that could not be matched, but it is not true and impossible.

Also, we must say that these people who are Soul Urge Number 7 are imaginative and creative, so they are great artists if they want to become, and they usually do become, and the world is amazingly interested in their work.

The thing that the Uranus also brings is the impact on their character, and we are talking about their inner nature that can be very distrustful and suspicious, they do not have enough faith in themselves, so they can miss out on great successes and pleasures.

So, you can imagine them as human beings who are incredibly talented, but at the same time, they are so distrustful that they cannot make it and even less make it big.

We must say that this symbolical impact could be seen in their personality, as they are one of a kind humans, who are both original, unpredictable, and creative human beings, and in life, they often turn their direction to the spiritual side of life and may seem as weirdoes and strange beings.

But no one can deny that they live in such a way that everything they do is filled with amazing and new ideas; they are feisty, arbitrary, intuitive, intellectual, in Love, idealistic. They dream of great Love, of something that is perfect and unique, but reality often proves them wrong.

Because of their way of life, that is often unhealthy, people of the Soul Urge Number 7 can struggle with their health, numerous injuries, circulation, inflammation, forgetfulness, injury propensity.

They must achieve a balance and live a much healthier lifestyle.

It is also said that they have such a soul that it remembers so much, so it is no wonder that they are attracted to the mysteries as well as spiritual development, as the most important part of their lives (at least they see it in this way, and we must add, that they are not wrong to think so). Finding an occupation that is based on a spiritual aspect is not a bad idea either.

They are selfless, they want to share their experiences with others, and often in their mature years they decide to write books about all their experiences in life, and in this way, these people feel that they are serving humanity (they do, and here their spiritual tendencies come to the surface).

They love to learn, to acquire new knowledge, to discover the world, and there is nothing that they could hear, it is more about what they can learn and experience for themselves. But, there is one thing -but their passion sometimes drives them away from real life.

These human beings, these old souls who are Soul Urge Number 7 should find an occupation where they can lead others, not submit to someone else.

The fact is that they, regardless of their occupation they have so much to offer the world, they just need to overcome their modesty and let words flow from their hearts.

They need to have a little more confidence in themselves, and their talents could find a perfect way to inspire the world, that needs some spiritual boost.

Advice for people who are Soul Urge Number 7

Before, people who are Soul Urge Number 7 have made many decisions based on their personal needs and have no compassion and empathy for the results of those decisions and how they have worked for others. This is one valuable lesson that they have to learn, so their mission in life should be fulfilled; and in this sense, they could give the best that they have in life.

These people should find a cause of their hidden nature, and it is maybe the fact that they may not have been able to empathize with others and they probably had a very strong sense that life was a struggle or a competition. This is one lesson that must also be learned if they do not want to remain victims of their inner insecurity and underdevelopment.

In the end, we will conclude this piece by saying, that people of this Soul Urge Number, may have come to this life to experience the joy and flow of life, and they may even feel called to serve other people – we will exclude the maybe part and say for sure.

Their lessons in this life are about compassion for those around them, and this should be used in the best obvious way that comes to their minds.

Their inner voice and urge will lead them to it; and what is even more interesting is that these fragile but loving souls should learn is how to make decisions that serve the highest good, not because of competition or the need to break through to the top. Just because this is the right thing to do, and it is the best quality in the Universe, to serve others.