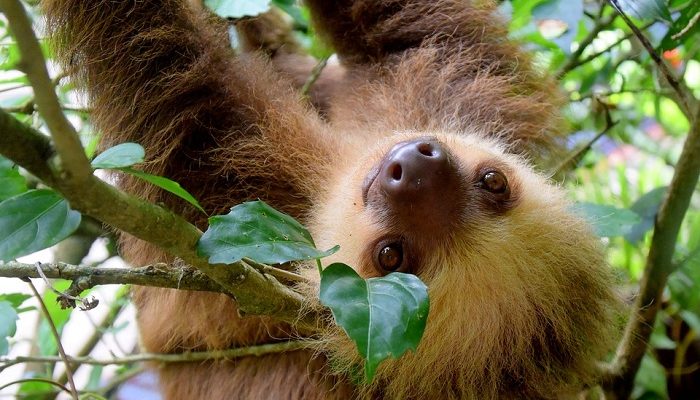 Sloths are ancient arboreal mammals belonging to the order of Pilosa, animals today inhabiting only parts of the Americas.

These strange creatures are widely known for their incredibly slow movement and a remarkable habit to spend most of their time simply hanging upside down from tree branches.

There are six of species, divided in two groups of three-fingered and two-fingered sloths.

These relaxed fellows live in tropical forests spreading from Central America, across Amazonian area to southern parts of Brazil.

Sloths are probably animals of the slowest movement on earth. They are ancient and very specific animals in evolutionary terms;

People usually associate sloths with ideas of slowness and laziness. You might ask, are they really lazy or their laid-back nature is just another trick of Mother Earth and evolution? Exactly so.

Sloths originate from very old times and some scientific evidence shows they have lived in South America about sixty millenniums ago or even one hundred millennia!

Most of sloths feed on leaves, except one sub-specie belonging to anteaters suborder. Their eating habits are responsible for their ‘lazy’ lifestyle;

Sloths move slowly not because they are lazy, but because their organisms simply have no need to waste energy away. Since they feed on leaves and live in trees, they do not have to run or chase prey animals.

Evolution made them completely adjusted to environment they feel comfortable in. They have bodies designed to move from a branch to branch, to hang from trees and reach leaves.

Their slow motion also represents an efficient camouflage mechanism that helps them escape the eyes of predators. 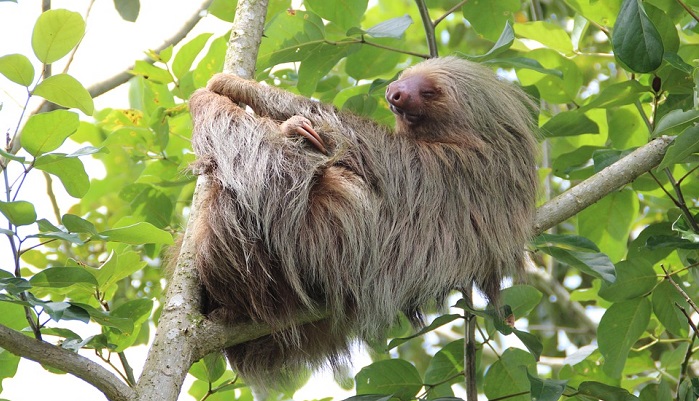 There are numerous strange and fascinating things you might have not known about these animals. These information will help us interpret and understand hidden spiritual meanings these animals have.

Sloths’ symbolism is specific and quite obvious, but there is much more to know about them before we dive into the world of spiritual forces.

A long time ago, sloths were enormously large. Prehistoric sloths used to weight up to seven hundred kilograms and grow up to seven meters of height;

These gigantic strange mammals are today extinct. However, there are still mysterious stories in some parts of Amazonian area.

Some of the locals would swear they have seen giant sloth in dark, shadowy forests of Amazon.

Legends about mapinguary, which is the term describing this monster, claims the giant sloth moves on the ground, have an unbearable body odor, catches humans and eats them!

However, there is no scientific evidence such a creature exist in modern times. Giant sloths had been extinct a long time ago.

While sloths might appear ugly and dirty, the truth is these animals do not stink at all. In fact, they do not produce any sort of body odor;

This is an amazing fact. Lack of body odor and sweat is another smart defense mechanism. It helps sloths become completely unnoticeable to blood-lusty predator animals, such as big cats and other efficient climbers and hunters that feed on smaller mammals.

They do not avoid water and would likely go down their trees and enjoy bathing.

Sloths are incredibly good swimmers and even more. Many scuba divers would envy their amazing diving skills;
Sloths have another evolutionary advantage other animals’ lack of, even those that spend much time in the water.

Can you even imagine that?

Sloths love to sleep, but not as much as you might think;

If there was an award for the sleepiest living creature on Earth, sloths surely deserve to be on top of the list. These sleepy mammals could spend up to twenty hours sleeping, but only in captivity.

Wild sloths actually do not need so much sleep. In fact, they sleep as much as people do, about eight to nine hours per day.

Some of information we have just shared with you did sound surprising, you surely must admit. However, these facts help us understand true symbolism of these strange animals.

In addition to association with slow motion and laziness, there is much more about sloths.

Let us find out what do they symbolize.

Relaxation and peace – Because of their specific slow motion or a lack of motion, people associate these animals with the idea of being laid back and relaxed. It seems these strange mammals are a synonym for relaxation. They remind us to enjoy life and to stop worrying all the time. Sloths represent true artistry in saving energy and wasting it reasonably.

Sloths use their skills and act only to get the essentials for a comfortable life. They symbolize harmonious approach to life and the importance of being at peace with other creatures.

While they are not unable to resist predators and the truth is an encounter with a sloth could turn really bad for a jaguar or another animal of prey, sloths avoid fight.

They represent peace and harmony.

Laziness and indifference – On the other hand, sloths’ specific behavior also make people think these animals are simply lazy. Sloths are often ‘accused’ of being lazy, while the truth is their slow movement is actually an ingenious survival mechanism. However, the symbolism persists. Sloths represent laziness and indifference.

It is common to identify lazy people with those innocent mammals, as well.

Patience and meditation – Sloths teach us the importance of patience. They are also associated with meditation, individual spiritual journey, introspection and so on. All of these skills, techniques and mechanisms help us achieve an inner peace and better understand the world around us. Sloths are able to spend incredible amount of time not moving at all.

They actually look like they are in deep meditation.

To be honest, who knows what they might have been thinking about?

However, if we interpret their behavior symbolically, sloths’ habits carry a valuable message. Be at peace with the world and yourself; be patient and wait for right opportunities.

Sloths symbolize reasonability mixed up with power of deep introspection and knowing your own spiritual self.

Sloth totem animal is a good-hearted spirit with particularly harmonious approach to life. It teaches us to value all the things we have in life.

Sloth totem offers a peaceful and supportive guidance through all the challenges of our destiny. People born under this totem are laid back, positive people with good intuition.

They do not like to stand out and attract attention, but are not likely to be seduced by others’ ideas.

They do not change their minds easily and are hard to know, because of their introverted nature.

Sloth people are kind, gentle and particularly shy. They avoid social situations and love to spend time by themselves or with a person they know very well.

It is not a lack of confidence that stops them from engaging in social gatherings or collaborations, but their shy nature.

Sloth people find it hard to let others people into their life, but they are always kind and polite towards others.

They are lovely to have around and they care much about those close to them.

They never seek conflict and would rather avoid quarrel. That does not mean they let others decide things in their name.

They have an assertive approach and do not give up their opinion or cause easily, only they would never attack or harm others.

These people are reasonable and extremely patient.

They know there are times when you must be still and wait for the right moment to act.