You all know about that popular charming fellow from Warner Brothers’ animation studios, don’t you?

While Pepé Le Pew have won our sympathies long time ago, real life skunks are not so charming to most of people.

However, in modern times, they have even becoming popular as pets.

While there are controversies about their deadly spray and many disagreements on removing the smelly gland for the purpose of keeping them at home, we must agree skunks are wild animals, in the first place.

Skinks are, above all, truly fascinating creatures. Thus, their symbolism is pretty clear and very powerful.

There are many interesting fact about them, which you might have never heard of.

The most amazing and the most repulsive thing about them is, of course, their powerful smelly weapon.

Let us find out what is so intriguing about them, so to help us better comprehend their symbolism.

These extraordinary animals, coated with elegant black and white fur, with several variations in size and pattern have much to reveal about themselves.

Elegant charmer Pepé have been trying to impress the cute kitty, meaning she is of his kind, for hundreds of funny episodes and it seems he never loses his courage and keeps persistent in his intentions. 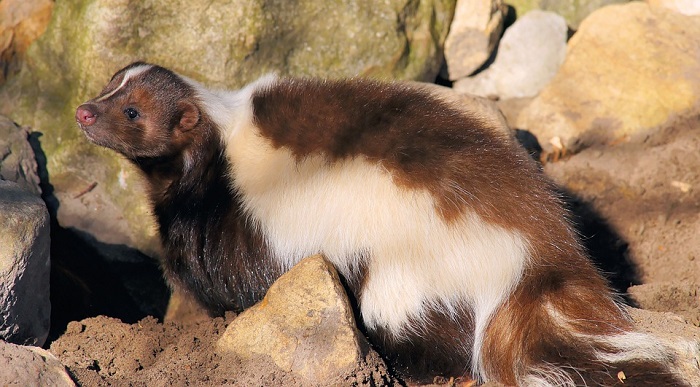 Did you know that skunks’ stripes tells us about the direction of the spot where their powerful weapon is hidden? Skinks would rather warn you, before they spray;

Such powerful and odd self-defense mechanism is simply an evolutionary advantage. Skunks are solitary nocturnal creatures, so they needed some equipment to chase away terrestrial predators who hunt from ambush.

As you can see, these smelly fellows are not mean; they use that nasty smell only for the purpose of self-protection.

Skunks perform a strange and remarkable warning dance before they would actually spray their enemies;

Skunks do not waste away their spray for fun. They do a series of awkward movements in order to intimidate the enemy, before they would actually spray them.

The explanation is simple; once they waste the resources, they need the time to ‘reload’, which leaves them vulnerable.

However, the power of their weapon is, let us say, overwhelming.

Skunks’ offensive smell could linger for weeks and people could sense it about a kilometer downwind.

Another impressive fact says it could be shoot up to distance of ten feet;

However, there are ‘strange’ people who can never smell skunks! Statistics say that one in one thousand of people cannot sense the smell of a skunk at all.

However, if you are familiar with that deathly sulfur ‘bomb’, you might find unattractive the idea of keeping skunks as pets.

People who do have them as pets claim these fellows are cuddly and cute, just the same way as cats or dogs are.

A skunk fun fact for the end!

Popular Pirates of the Caribbean character Captain Jack Sparrow is actually a mix of Keith Richards and Pepé Le Pew, according to famous actor Johnny Depp who played and created the role for the most part;

Ok, but what about skunk symbolism? What spiritual powers does this intriguing specie possess?

Most of people think of skunks as threatening pests and avoid them.

People have been labeling these animals as smelly and disgusting because of their special natural defense mechanism.

Although it is rude to say a person smells as a skunk, it is what many people would say about someone who does not take care about their hygiene or so.

Skunks are a synonym for bad smell, although they are not dirty by nature.

Threat and impurity – people would commonly simply identify skunks with their unbearable smell, not thinking about its true purpose or a real nature of these animals. Skunks are not dirty animals, at all, although their defensive spray smells deadly, to say so. People think of them as smelly, repulsive pests you do not want to encounter. Skunks are usually perceived as a threat.

However, they are not dangerous or aggressive creatures, but are highly self-protective by nature.

You should avoid the, yes, if you do not want to experience the disaster of that lingering sulfur odor.

While it is hard to blame skunks for defending themselves, they have been keeping the title of the smelliest animal on Earth for ages.

Courage and defense – Because of their extraordinary self-defense mechanism, skunks are also perceived as highly self-protective animals. They are small and represent a desirable prey for larger mammals, if you exclude the smell. They are courageous, as well. They would perform some sort of warning dance to chase away their enemies, which makes them brave little fellows.

They are not easily frightened and are very agile. Skunks stand their ground and point out you should beware of them.

In spiritual sense, they teach us bravery, courage, and the importance of standing out for our causes and ourselves.

Awareness and watchfulness – Skunks are always on the watch. They are solitary creatures and they have to be aware of the surroundings, in order to keep safe and to survive. They have delicate senses and feel the fines vibrations of the world around. They move by night, so they are cautious about hidden predators, waiting in ambush.

Skunk spirit teaches us to pay attention on our surroundings and to be cautious about others.

They symbolize good intuition and perception, awareness and observance.

They also represent self-reliance and resourcefulness.

Skunk personalities are people who put much of their effort to keep themselves safe. They are sometimes overly protective.

These individuals are sensitive and emotional, sometimes anxious and worrying, but generally self-reliant and courageous.

They are not easily discouraged by other peoples’ acts or words, but they sometimes tend to overreact things.

Skunk people are protective by nature. They simply have that self-defense attitude in almost every situation, even if there is no actual threat.

It is in their nature.

While that super protective attitude could help them feel safe, it also stops them from developing deeper connection with other people.

They tend to be suspicious and mistrustful about others.

If you are a Skunk person, try to control the urge to put walls around.

Once you let people truly know you, you will also feel more relaxed and comfortable.

Most of Skunk people love to have a lot of time only for themselves. They enjoy long solitary walks, exploring new places, gaining knowledge, studying or else.

They do not need others to tell them what to do and they are able to see and enjoy wonders of the world alone.

However, they do like to share their experiences with carefully chosen friends or their family, from time to time.

They might appear reserved, but generally, they are not introverted.

There are a weakness and an advantage hidden behind that tough attitude of Skunk people.

They are emotionally vulnerable and sensitive, so they tend to somehow avoid even the possibility to get hurt, by putting their armor on.

On the other hand, their sensitive souls help them understand others and develop truly passionate and caring relationships, once they let people into their life.