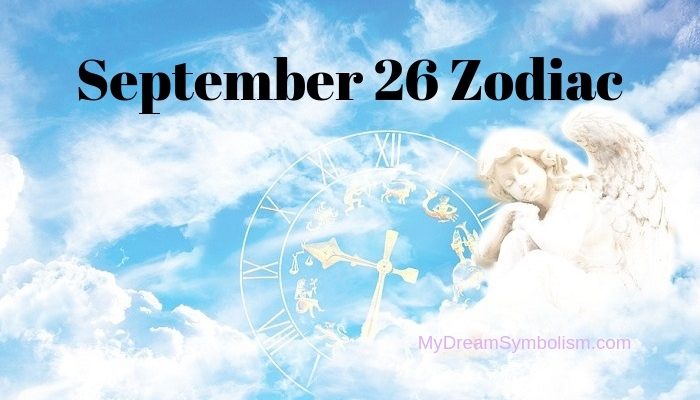 September is the autumn month, and it is the month that belongs to the Virgos and Libras in one part. Today we will give you an Astro-numerological analyse of the particular date September 26, and it is the date that belongs to the people who are under the planetary influence of the Saturn and Venus, they are Libras, and have many of their characteristics, as you will be able to see for yourself.

People of the September 26 always want to keep some parts of their lives for themselves, but this doesn’t mean that they can do it successfully; on the contrary, they can be exposed.

These people can be idealists but rarely get away from practical problems and worries, and they are the people who are disappointed and hurt often, cause sometimes they are very naive, and often make same mistakes again and again.

Most people born this day have a great sense of humor, but others often overlook it because it is based on extremely subtle irony, and sometimes these people can choose a completely wrong time to be funny, and this can turn their close people to go crazy.

However, their tendency towards criticism rarely goes unnoticed and provokes hostility in people who are not so close to them and who don’t know their character.

It seems to the environment of the people born on September 26 that they are dealing well with stress, but they actually only internalise it and thus cause psychological and physical problems – they like to put their issues under the carpet and deal with everything later. For this reason, counseling with a psychologist or speaking with a close person could be the way out from a problem for these humans.

All Libras and those born on September 26, in particular, have accentuated personal magnetism and charm and are strongly attracted or they attract the opposite sex. These people like to feel comfortable and sexy, so they will quickly get into relationships. You know those people who will meet one person today, and will be married to that person in a week? Well, it could be a person who celebrates a birthday on September 26, since these Libras are usually behaving unpredictably in love.

These people born on September 26 can be seen as amazing lovers, they love when partners give them the feeling that they are the only one, the best and the first. And they can love like no one else – they are unpredictable, rather than a romantic than passionate, but when a situation requires they can be.

These people are tolerant and are always trying to achieve a harmonious relationship. What they do not want to do is to leave a wrong impression on their lovers, but they sometimes do it, unintentionally, and are rarely in a friendly relationship with the opposite sex. They are not always faithful in marriage, but will never leave their spouses for another lover unless that marriage is terrible and there is no other solution.

These people are dedicated to their families and love children very much. Their behavior is not always an excellent example of their emotions, and in their case, one thing does not exclude another – they could have a turbulent relationship, and still be amazing and dedicated parents. 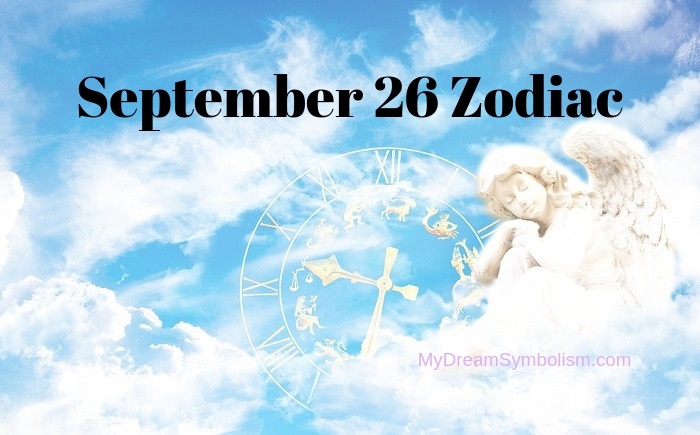 The dreamlike behavior characterises people born this day, and for them, it would be much better to believe in logic and to value practical application in everyday life highly. But they also feel that some of the problems they face cannot be solved by using rational solutions, like the matter of the heart. And yet, paradoxically, their behavior sometimes knows it to be irrational means that it can be the best solution.

Libras born on September 26 are honest, based on the fundamental values in their work, and are business-minded in everything they do. There is a powerful driving force in these people that directs them towards more sublime and noble things in life, everything they do have to have some kind of this “charm”.

These people can be religious, and they believe that the whole nature reflects the work of the Creator; they are very spiritual and believe in some higher force. They love books and know how to write. These people who belong to the September 26  love travelling, but they put their hears in the first place – after seeing a good part of the world(because of their work), they will get tired of it and return to warm home, comfort and enjoyment.

They have good executive skills, and will no doubt be successful in the business.

These people born on September 26 very often have some other interest or hobby they secretly consecrate – this something that can be seen as their secret job, that only they enjoy. This secret profession is connected to the fascination with hidden and secretive activities.

These Libras born on September 26 are under the apparent influence of the planet Venus and are also under the numerological impact of the number 8 and planet Saturn.

The planet Saturn points out the responsibility and the feeling of constraint and prudence, which makes traditionalist nature even more pronounced in the people who have these features already, but in the life of the people who are born on September 26 this is the side that can show up from time to time. So the impact of Saturn can show its face in some ways, but in principle, it can mean that these people are building their career very slowly, and this is related to their cautious attitude towards money and personal matters.

Those born on September 26 are under the influence of combination Saturn and Venus, and these two planets give them opposite influences. Saturn’s influence gives them a cold and retreated phenomenon, while Venus points them toward beauty and love.  People who have this planetary connection often doubt in love, since planet Venus brings the purity of the emotion, and Saturn the unreserved affiliation. These people flee, build layers of protection around them, destroy every attempt at a good start, but they believe in love and that they will found it.  These people often go through painful love disappointments, and this could be the consequence from the Saturn and Venus opposition. Sometimes, they give up, give in to emotions, and show vulnerability.

Numerologically speaking, number 8 can be both good and bad, but definitely for the people who carry it in their date means that they have an incredible energy that can go in both direction, good and bad. Their environment often does not understand them; they can be surrounded by misunderstanding, incomprehensible and characterised as cold. While there is a fire of emotion in them that can be seen at any time, only if people know where to look.  It takes time for these people to understand and accept that they know love only through cuts on their skin. They are not among those who, on the example of other people, can grasp some things and recognise the essence of emotion.

Their number is 8, and their color is white.

It is said that winner writes history books, and we could agree in some way, but for us, as humanity is essential to remember that all historical events have some impact on humans, both good and bad.

1087 -In Westminster Abbey William II was crowned as an English king.

1580 – English sailor and pirate Frances Drake sailed to the port of Plymouth at the end of his journey around the world, which lasted for 33 months.

1687- In the battle with Turks, the cannon caused an explosion in which the Parthenon and the Prophets of the Acropolis were heavily damaged.

1815 – Russia, Austria and Prussia form the Council of the Alliance, which was later signed by all European rulers except the British regent, the Pope and the Turkish sultan.

1907 – New Zealand, a colony of Great Britain, became the dominion within the British Commons.

1918 – Allies in the World War I started a general offensive that led to the breakdown of Central Powers and the end of the war in early October.

1960 – Cuban President Fidel Castro has held the longest speech that lasted for 4 hours and 26 minutes, in the history of the UN.

1960 – The first TV duel between two presidential candidates was held. As part of the campaign for US President, the then-current Vice President Richard Nixon and Senator John Kennedy faced the national television.

1967 – US President Lyndon B. Johnson ordered an enhanced military engagement to eliminate the positions of the Vietcongists at the border of North and South Vietnam.

1968 – The so-called Brezhnev Doctrine allowed the Warsaw Pact countries to be limited sovereignty.

1980 – In the October blast of the right-wing extremist in Munich, 13 were killed, and more than 200 were wounded.

1984 – The United Kingdom and China agreed on the return of Hong Kong in 1997 under the sovereignty of China.

1988 – Canadian athlete Ben Johnson was taken away a gold medal of 100 meters due to the positive result of the doping test.

1989 – Vietnam withdrew its troops from Cambodia, which had been in the country since the end of 1978, leaving the government of Hun Sena fighting themselves against the Maoist guerrilla organisation “Red Khmer”.

1995 – The trial of former Italian Prime Minister Giulio Andreotti began on the charge that he had close ties to the mafia.

1997 – In an earthquake in central Italy, 11 people lost their lives, heavily damaged Medieval Basilica of St. Francis of Assisi.

2000 – Greek Farry” Ekspres Samina” hit the underwater crest of the island of Paros and sank in 20 minutes. In the crash of a ship carrying over 500 passengers, life lost 72 of them.

2001 – Belgium gave in, to the International Court of Rwanda of former Rwandan Minister of Finance Emanuel Nindabahizzi, accused of involvement in genocide.

Popes, pets and philosophers are among famous people born on September 26, and the choice of their careers is not surprising since these people are under the influence of the planet Venus, the planet of love, art and beauty.

1948 – Maurizio Gucci, the creator and owner of the Gucci fashion house.

Let us add up more characteristics that we did not mention before, and they are essential for the understanding people of the September 26.

These Libras can be seen as exceptional perfectionists, and they know that things can be done in one way, right, and things often work over and over again until they reach the desired result. These people believe that by exercising and persisting work, they will reach perfection – but this does not always translate in their lives in some practical way.