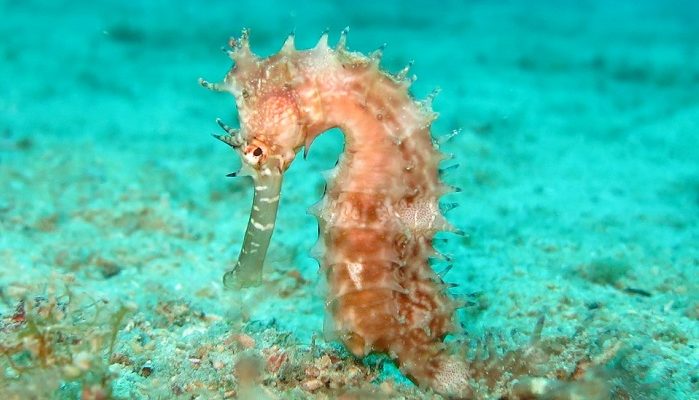 They are of a quite unusual appearance and biological characteristics, so they are often considered magical and enchanting. Seahorse motifs are common in both traditional art and contemporary design.

These sea cuties are commonly featured in summer season fashion designs, such as swimsuits, beach towels, dresses, T-shirts and other summer accessories. In many coastal areas, seahorses are present in folklore and local artwork.

Seahorse name originates from Ancient Greek; Greek called it Hippocampus, which is a combination of two words that mean a ‘horse’ and a ‘monster’.

Well, these little fellows are hardly real monsters, but their unusual skeletal armor with spikes makes them look like little and lovely dragon-like horses!

Seahorses have many interesting biological characteristics that make them appear strange and magical to humans.

Did you know seahorses’ eyeballs can move in different directions at the same time? These animals also have very useful tail, which they use to slowly move around and to catch food, as well;

A part of human brain, connected with memory functions, is called hippocampus. It is a complete coincidence, but it could explain another association we have about seahorses.

They are spiritually and symbolically associated with creativity, intelligence and imagination.

Seahorses’ eyes and their unusual movement made these little creatures symbols of watchfulness and observance. In many cultures, they are seen animals representing mercy and trustworthiness. Seahorses are featured in some of the most developed and widely known mythologies, such as Ancient Greek.

According to legends, Poseidon, the mighty ruler of waters travels through oceans in a carriage driven by two giant seahorses; 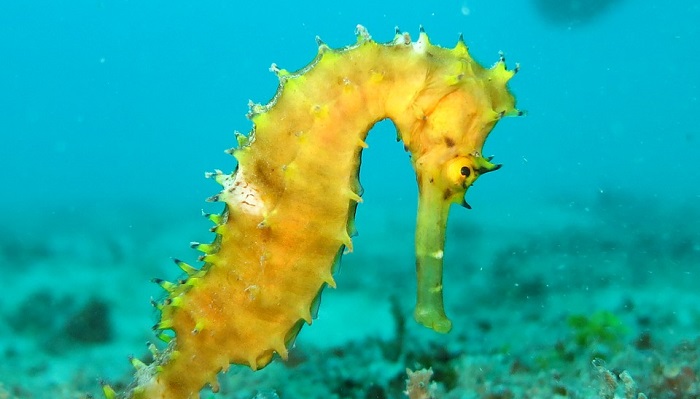 Old Irish and Celtic tradition considers seahorses powerful spirit animals and associates them with bravery and positive symbols for sailors. Historical evidence suggests Grace O’Malley, a brave Irish heroine from sixteenth century, have sailed under the banner of Seahorse.

She was using this motif to ensure safe and prosperous expeditions. Her descendants still use motif of seahorse on their banners.

Different societies have stories about beautiful sea nymphs riding seahorses and helping lost sailors find their way home or saving them from shipwreck. These stories made seahorses one of the most powerful lucky omens for all that sail and travel across seas and oceans.

As a lucky sailing symbol, seahorse motif is commonly featured on ship banners or coats of arms. It represents safe and prosperous sailing journey.

Chinese traditions see seahorses a type of miniature sea dragon and believe these little monsters bring fortune and good luck. In many European traditions, seahorses are believed to carry souls of dead sailors to another world and ensure their secure journey to desired afterlife destination;

Pictures or mosaics of these beautiful strange creatures are commonly seen in remains of ancient pools and bathrooms.

Seahorses have positive symbolism and are usually associated with good fortune, love, tenderness and care. These animals are also considered intelligent and mystical.

They are associated with healing, watchfulness and tranquility, as well. These calm and gentle beings are identified with freedom, imagination and creativity.

Healing powers – Many societies around the world ascribe mystical healing powers to these unusual beings. They certainly calm down stressful minds and make us remind ourselves there are much less worries than we usually think of. However, different cultures ascribed them some specific healing powers.

For example, Chinese believe seahorses are in strong connection with masculine potency and they use seahorse medicine to treat impotence and raise libido.

That explains why these animals are on list of protected species. Chinese anglers sell a kilogram of seahorses for incredible prices!

Watchfulness – Seahorses’ specific vision makes them symbols of watchfulness and awareness. Their eyes can move independently of one another, so they are able to see things differently than other creatures.

People associate these natural characteristics with concepts of constant awareness. In symbolical sense, seahorses are commonly identified with ideas mentioned above.

Imagination and creativity – Seahorses are considered magical creatures and everything that is magical is in strong connection with creative energy and imagination. Some people believe seahorses give them an incredible imagination drive and help their creative energy find its way out.

Apart from this, seahorses look impressive and their interesting appearance has been an inspiration for artist since ancient times until modern days.

Uniqueness – Seahorses certainly look extraordinary and unique. They remind us of mystical creatures, such as dragons, water nymphs, sirens and mythological characters and deities. Their appearance, along with specific biological characteristics, makes them a true gem in animal kingdom. These cuties are really one of a kind.

Famous Charles Darwin, who was familiar with uncountable number of fascinating creatures, had considered seahorses ‘beings of the most beautiful form’;

Tranquility and slow motion – Did you know seahorses are some of the slowest moving water organisms? Yes, they move really slowly and appear almost floating in water. They symbolize slow pace, calmness, tranquility and peace. They do not need to rush.

They have specially designed snouts so they can move without disturbing waters around.

Seahorses appear strange, indifferent and slow, but they are skilful and efficient predators. They eat small crustaceans and get them without much difficulty, thanks to their amazing natural secret weapon.

However, if they have to hunt their prey, they could double their speed without problems.

Love and parenthood – Here is an interesting one. Seahorses are often associated with ideas of love, care and devotion. They are identified with concepts of parenthood and parental love, but, unlike other spirit animals, here is an accent on fatherhood.

These animals have a unique way of reproduction, an exception in animal kingdom. Females lay their eggs in males’ bellies, where they are about to be fertilized.

Male seahorses would carry the eggs for several weeks, until little seahorses are born out of them.

Seahorses are strongly associated with parenthood and specifically parenthood. In modern times, it is common for ‘fresh’ fathers to get a seahorse motif tattoo.

This amazing creature has always been associated with these concepts and it is highly valued for it.

Seahorse as totem and spirit animal

Seahorses are unique totem animals, so people under their protection are usually extraordinary individuals. However, they are not attention seekers; their natural uniqueness make them easily stand out of the masses.

These people are calm and relaxed and they love to enjoy life to the fullest. They are devoted lovers, good friends and especially caring fathers. Here are traits of Seahorse people.

Seahorse individuals are probably some of the most positive persons you will ever meet. They are gentle and very understanding of others.

They find it easy to approach others, to give good advices and help other people. Their positive and kind nature helps them go through life with smile and a positive attitude. They do not seem to have many worries in their lives, simply because they attract only positive vibrations.

However, if some misfortunate event happens, they are unlikely to make drama out of it or disturb others with their problems. They would rather keep to themselves and find a way to get out of unpleasant circumstances in a patient and tranquil manner.

Seahorse people are amazing to have around. They love to learn, imagine and create and they share their inspiring ideas with their friends and family, but never seem to impose their opinion or ideas.

Sometimes, however, it could be good for you to be just a bit aggressive in that sense, because you do not want all your dreams and plans slip away from your hands. Listen to your Seahorse totem guidelines, but stand for your cause.

If you are born under this totem, you probably have a few devoted and loyal friends and many people who appreciate and respect you.

This totem animal brings you good luck and serenity, making you approach life with a free and positive mind. You are probably creative and love to deal with art.

Your calm and relaxed nature makes you able to sense tiny vibrations and changes in energy around common people are unlikely to notice. You have a good intuition, so you can freely rely on it!

Seahorse people are extremely good and caring parents, especially fathers. They tend to raise their children with love and understanding.

They are teachers, not punishers. Seahorse parents strongly believe children grow kind, smart and healthy if you show them love and understanding.

That does not mean they are overly liberal; they are able to evaluate circumstances and choose the best way to support their young ones and help them become impressive personalities.