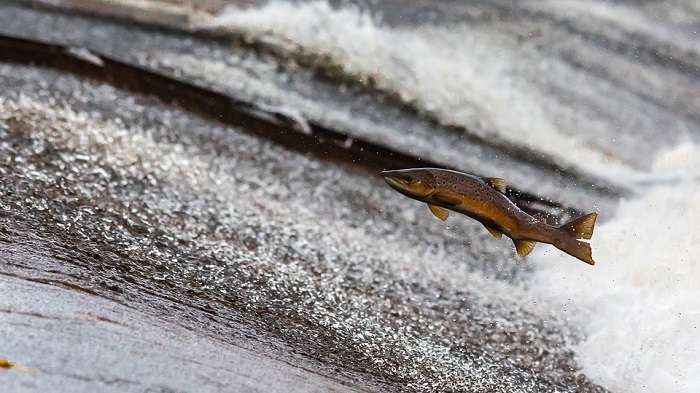 If there is a fish with so strong symbolical meaning and spiritual power, salmon is by far one of the most remarkable examples. This fascinating animal is widely known for its specific behavior and migration habits.

As you might have heard or read somewhere, salmons inhabit both salty and fresh waters; young salmons reside in fresh, flowing water (rivers) for two years and then swim to the sea.

After certain period, these fishes would return to rivers, in order to produce offspring.

Did you know salmons inhabit both fresh and salty waters?

Yes, these animals have a dual habitat, which makes them interesting and fascinating to humans;

In addition to their migration habits, in order to follow the traveling patters, salmons have to swim upstream at the time they need to return to river sources for spawning.

This specific behavior is often associated with strong spiritual power.

Salmons are thus associated with persistence, strength, courage and determination. Salmon’s dedication and focus remind people of importance of hard work and encourage them not to give up their goals and dreams.

Returning to rivers, salmons have to swim upstream, which is seen as a behavior of powerful spiritual meaning;

People have been fascinated by these incredible water creatures since far past. This fish have a great significance in Celtic and Nordic folklore, but it can also be found in Native American traditions and spiritual interpretations.

Salmon’s pinkish-coral meat is a true delicacy for people and it is considered one of the most tasteful seafood sources.

In pagan times, it was believed that by eating salmons’ meat, a person would gain some of their incredible spiritual energy. 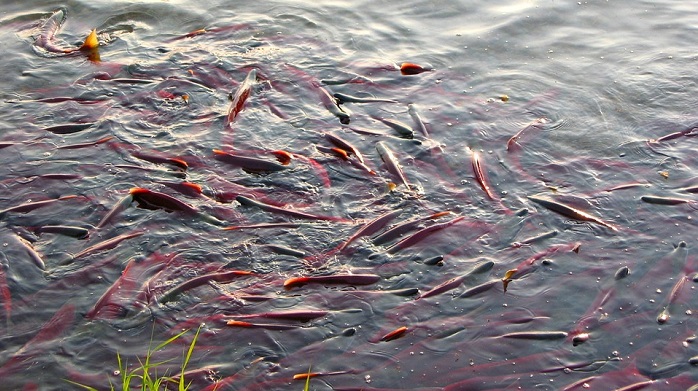 Folklore and mythological depiction of salmons

Salmons are present in Celtic traditional tales and Nordic mythology, as well as ion legend s from Scotland and Wales.

They are also to be found in Native American spiritualism and tribal folklore. In America, salmons are believed to possess astrological powers and they are powerful totem animals.

Scottish and Welsh tales and beliefs

Salmon is very important symbol for Scottish people. This fascinating animal is featured in design of Glasgow coat of arms.

According to an old tale, a Scottish queen gave hare engagement ring to her lover. Her jealous future husband, the king, took it from her lover, while he was asleep and threw it away into river waters.

He imprisoned the lady and demanded the ring to be returned, in order to set her free.

The queen was desperate, so she asked the saint to help her.

Saint Kentigern’s monks searched the river and found a salmon with a ring inside his slit belly!

This legend made the saint protector of the city and salmon its symbol;

An ancient Welsh Arthurian legend tells about the wise salmon that helped a legendary hero to find the divine child, Mabon, who was imprisoned and no one had known his whereabouts.

After a desperate and aimless search, the hero was advised to seek for the wise Salmon of Llyn Llyw.

The sacred and divine creature revealed him where the child was and helped him reach and save it.

The wise Salmon of Llyn Liyw was an important figure in old Arthurian legends;

Ancient Celts have also admired salmons as creatures of great wisdom and spiritual powers. They are featured in old Irish legends and beliefs.

An interesting legends tells about the salmon that was feeding on magical hazelnuts and thus gained incredible wisdom and knowledge.

A prophecy there was that by eating the salmon’s meat Celtic hero Finegas would gain all the magical knowledge and wisdom. Instead of Finegas, his apprentice Fionn caught the salmon, roast it and hurt his finger while doing so.

The knowledge was passed to Fionn, because he sucked his harmed finger to soothe the pain.

In Celtic folklore, salmons were believed to be guardians of great knowledge and wisdom. They were considered magical and powerful spirits;

Salmons are also present in Nordic mythology and are associated with Loki, the trickster god.

Loki turned himself into a salmon, in order to escape the gods he enraged by murdering the gods’ favorite one, Baldur.

Loki did not manage to escape the almighty Thor; as a result of that capture, all salmons have distinctive pattern on their back. It is said to come from Thor’s hand.

Salmons have been important source of food for many cultures around the world, including Native American tribes.

Not only they were grateful for such nutritious and tasteful meat, but they also appreciated salmon as sacred and spiritually powerful animals.

Salmon is an important totem animal, praised for traits people ascribed to them. Those are similar to interpretations originating from North European folklores.

For Native Americans, salmon represent wisdom, endurance, strength and persistence and it is believed this animal has amazing totem powers;

Salmons are believed to be wise, persistent and brave spirit animals. They are usually seen as positive symbols and are admired and appreciated in many cultures.

Salmons’ tasteful meat has been important part of diet for many people and it is considered a delicacy in modern environment.

In spiritual sense, salmons are believed to possess magical powers and are associated primarily with concepts of wisdom and greater knowledge.

Wisdom and knowledge – As we have seen, salmons are symbol of knowledge in different belief systems around the world. They are often ascribed magical and divine powers. Their symbolism is mainly positive and it is often believed people could gain some of their wisdom by eating their flesh.

Endurance and persistence – Salmons’ specific spawning behavior makes these animals an ultimate symbol of persistence. They are able to endure great difficulties to achieve their goal. Their natural behavior is quite impressive, so no strange it is interpreted important is symbolical sense.

Determination and focus – Similarly to interpretation previously mentioned, salmons represent focus, dedication and determination. In nature, they would follow their pattern of migration by all costs. They are persistent in their intention and courageous, you might say.

That is a valuable lesson for us people.

The power of transformation is often associated with salmons.

Salmon is an incredible totem ‘guru’. This amazing creature offers a great support and spiritual guidance. If you are born under the totem of Salmon, you are certainly a person of great talents, skills and the power of adaptability.

You are able to deal with the most difficult situations with a smile on your face and strong will to keep on going.

Salmon people are positive individuals, worth of looking up to.

Salmon personalities express strong will in anything they do, whether it is a career path or simply something they love. Once they set their mind onto something, there is hardly a factor that could stop them.

They are determined and focused on their goals.

Salmon people possess skills and character needed for prominent, influential and leading positions. They easily inspire and encourage others to follow them.

Salmon people are courageous and they rarely retrieve when faced with challenges or problems. Actually, such things only move them forward. They are able to deal with problems with a clear mind, dedication and patience.

They rarely become anxious and they are not prone to drama and panic.

These individual are thoughtful, reasonable and self-confident.

These people are not afraid to make big changes in life, even if they are used to the same pattern of behavior.

Actually, they combine the two. They face changes and challenges with their experience, organizational skills and tranquil mind.

They do not find it hard to adapt to new circumstances and are likely to accept them and try to make the best of them.

Thanks to all these traits mentioned, salmon people are positive minded and joyful people.

They love to spend time with friends; they laugh a lot and make others feel good in their company.

They usually know many people and are always eager to meet new friends.

They feel great in social situations and emit their positivism around.