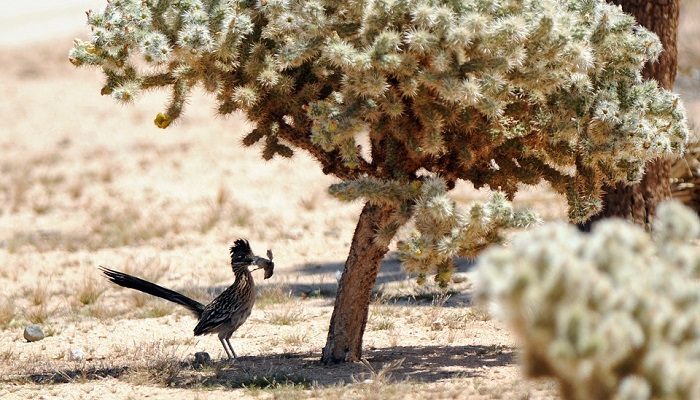 The most popular roadrunner bird in the world is certainly the Road Runner, famous cartoon character from Warner Brothers studios, created decades ago by Chuck Jones.

In cartoon series, the Road Runner always escapes the unlucky and clumsy coyote, known as Will E. Coyote or simply, the Coyote, who tries to catch and eat the bird, but never succeeds.

You either love Road Runner or hate him! A model for this cartoon character creation was real-life greater roadrunner species.

In reality, however, coyotes do catch roadrunners and feed on their meat regularly.

Roadrunners are known around the world mostly because the popular cartoon series about an ever opposing duo of two animal characters, the Road Runner and the Coyote;

In Warner Brothers’ cartoon series, the Road Runner is portrayed as a large, long-legged, blue colored bird and he has not much in common with the real species, except, perhaps, his extraordinary speed.

The Coyote’s traits are completely ‘cartoonized’, to say so, as well. In nature, neither roadrunners escape coyotes so easily, nor coyotes are dumb and maladroit as the Will E. is.

So, what about reality and people’s symbolic interpretations of real roadrunners?

Roadrunners are admired and respected by Native Americans for their skills, courage and speed;

Do you know how real roadrunner looks like? Roadrunners inhabit deserted areas of Mexico and southern parts of US lands. Roadrunners really have long legs and run quite fast for a bird.

They have brownish feathers, medium to large slender bodies and oversized beaks. 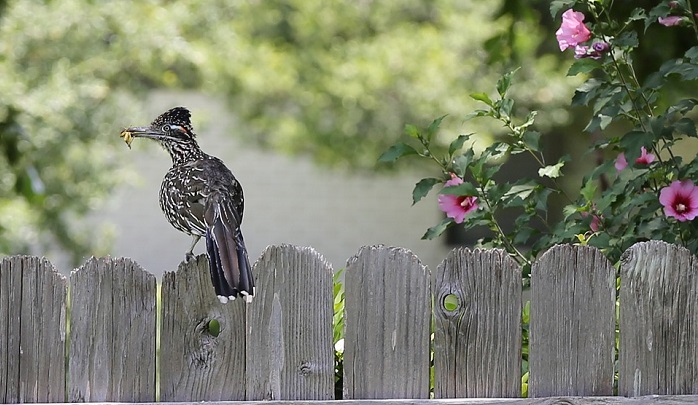 Roadrunners are able to fly, although they prefer running as an escape mechanism. They can reach up to 32 kilometers per hour, according to measurements;

Roadrunners do not make ‘beep-beep’ sounds as their cartoon relative. Their vocalization could be compared to that of doves; generally, roadrunners are silent birds.

They are skilful and opportunistic when it comes to feeding. They feed on all sorts of insects, smaller reptiles, snails, scorpions. They even hunt smaller birds and snakes.

Did you know greater roadrunner is known as a ‘snake killer’? Yes, this courageous birds is one of the few members of animal kingdom feeding on rattlesnake flesh;

While roadrunners are known to be courageous when it comes to hunt and being capable of facing one of the most feared creatures in the world, the majestic and dreadful rattlesnake, they have enemies of their own.

Guess what, we speak of coyotes.

In the wild, coyotes do not have trouble catching roadrunners; they could run twice as fast as these speedy birds.

Roadrunners are important spirit animals in Native American folklore, especially for Pueblo tribes. Hopi, Anasazi and Mogollon people have all admired roadrunners and believed these interesting birds have special powers.

Pueblo Indians believe roadrunners chase away evil spirits. Roadrunner footprints come in an atypical X shape, which was associated with the idea of confusing malignant forces and making them get lost.

Native American tribes have always had great respect for roadrunners. They believe this bird brings good fortune, while, at the same time, makes evil forces go away;

Pueblo cultures used roadrunner feathers are a lucky charm. They would use these feathers to decorate babies’ cradles, in order to get magical protection from the Roadrunner spirit.

In Mexico, seeing a roadrunner is believed to be good omen.

While, in general, Mexican Indians considered roadrunners sacred, but most of the tribes would still use their flesh to prepare traditional cures.

Roadrunners were popular clan animals for several tribes, including Zuni Indians and other Pueblo people;

Roadrunners are known for their speed and courage. These fascinating birds are usually seen as positive symbols, fortune bringers and those that chase away evil.

People admire and love roadrunners for their impressive skills and associate them with several positive ideas and concepts.

These spirit animals are believed to have special powers, to be intelligent, sensitive and lucky.

Roadrunner spirit is a positive force that reminds people of happiness and joy.

They symbolize intelligence and courage, the ability to face dangers and difficulties with a positive attitude.

These spirits radiate optimism and good vibrations, helping us achieve our goals by listening to both our instincts and mind.

Roadrunners also bring luck and fortune, so it is good to have them as spirit animal and totem. Roadrunner motifs are commonly used as symbols of courage, for protection and fortune.

People born under the totem of Roadrunner are thoughtful, but quick in their decisions.

They are intelligent, determined and active. Roadrunner people have great diplomatic and communication skills.

They are sociable and love to have fun in life. They do not follow the rules, in terms of what is meant to be an average lifestyle.

They are unique, outstanding and incredibly charismatic.

Roadrunner people express incredible gift for diplomacy and communication. It is in their nature to mediate between different parties and create good relations within the society.

They should be journalists or public relations managers, event organizers, lawyers or else. They do not lack sense for planning and finishing tasks given to them.

However, their nature is playful and they are prone to neglect their duties only to have fun.

If you are a Roadrunner person, we know nothing can make you sit still and be satisfied spending too much time in one place. Roadrunner people like exploration and adventure, seeking jobs that would fit their playful personality.

It is the best you choose profession that will give you the freedom of difference and constant move.

Otherwise, you are likely to become quite unmotivated and start avoiding your obligations.

However, given right opportunities, Roadrunner people make quick, smart and thoughtful decisions. They are restless and very active, but they do not rush.

Their essential need for speed makes them work efficiently in short terms.

That is an ideal profile of a Roadrunner; a person who knows what they want, do their tasks with passion, but still have energy and time to have fun and explore new things in life.

Roadrunner people are friendly and talkative. They always have something to say, to the point sometimes other people might find them clingy. Hold your breath for a while and listen to others a bit.

Overall, Roadrunner personalities are incredibly expressive and positive. People generally love to be around them.

Balance your immense positivity with your Roadrunner totem gifts; we are sure you will have a lot of success in life.