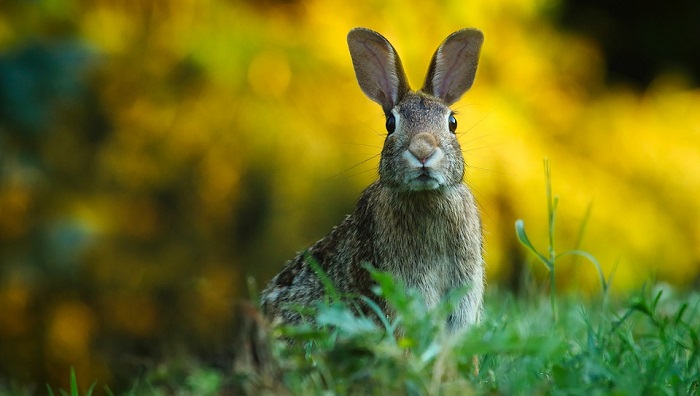 Cute bunnies would always melt your heart down, don’t you agree? Rabbits are interesting fluffy fellows that have been inspiring beliefs and legends since antique times.

They are also popular as pets. Interpretations of rabbit symbolism greatly vary, depending on particular source of information, cultural conceptions, local traditions and even personal opinions.

For some people, rabbits are a synonym for unreliability, unsteadiness, impatience and rush, while for others these cuties represent tenderness, fragility, beauty and grace.

However, historical evidence suggests rabbits are usually identified with symbols and ideas about fertility, abundance, fortune and love.

Rabbit symbolism varies a lot, depending on a complex of factors, but generally, these animals are associated with fertility and abundance and concepts related to those;

Rabbits are tiny, gentle animals. They cannot boast around with their strength or bravery, but they are cunning and fast little fellows. Rabbits are always seen as tender, vulnerable creatures that are an easy target for much larger and stronger animals.

They are also considered timid and shy, which are some of the most commonly ascribed traits to them.

However, rabbits have other qualities and they are an ultimate symbol of things that are of a vital importance in people’s lives.

Rabbits through traditions and history

Some of the first interpretations of rabbit symbolism originate from Ancient Greek tradition. Rabbits were believed to be favorite animals and good friends of beautiful Aphrodite, the goddess of love.

This gentle and kind goddess was often portrayed with a rabbit at her side.

Thus, rabbits were associated with ideas the goddess represent and those are love, fertility, abundance and grace, amongst others. Rabbit is also believed to attract these things to peoples’ lives. It was a good omen. 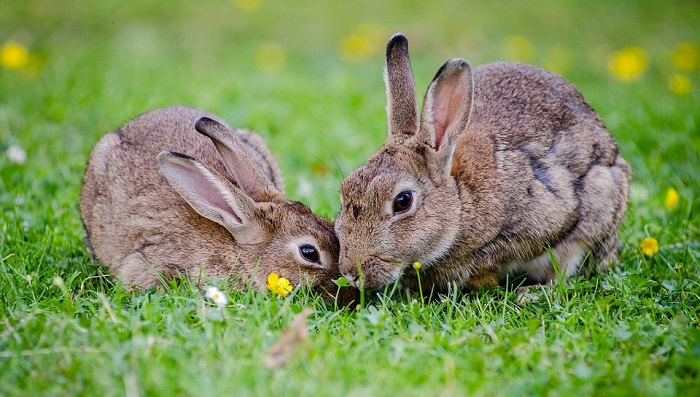 Rabbits were popular in Ancient Greek tradition, believed to be loyal companions of beautiful Aphrodite;

In Nordic tradition, rabbits were depicted in a similar manner and associated with the very same ideas. They were companions of Nordic goddess of love and fertility, the mighty Freya.

In Teutonic tradition, rabbits were followers of Holda (also, Holle, Huld, Hulda, Frau Holle), the Germanic legendary figure of agriculture and protectress of women and their crafts.

In Scandinavian and Germanic traditions rabbits were depicted in a similar manner to that of Ancient Greece, seen as followers and friends of legendary (women) figures associated with agriculture, fertility, sexuality and love;

In Ancient Egypt, rabbits were associated with different concepts. They were symbol of Tot, Egyptian god of wisdom and creation.

They are seen as symbols of lust, sexuality, fertility and love, but they also represent new life.

In some cultures and belief systems, rabbits are associated with the idea of new beginnings, life, birth and rebirth and creation;

In Far East, rabbits are seen as lucky animals. Chinese believe they attract fortune and wealth and think of them as symbols of longevity, prosperity and happiness.

Rabbit is one of Chinese zodiac signs; it is the fourth sign. Chinese ascribe many positive traits to people born in the year of the Rabbit.

Those people are believed to be excellent diplomats, communicative, friendly, compassionate and kind individuals. However, it is also thought they could be cunning and tricky.

Rabbit’s foot and dreams about rabbits

In dreams, rabbits usually represent a good omen. It is believed that of a person dream about rabbits, fortune and happiness will come to their life and home. In addition, a rabbit in a dream might be an announcement of a new life, meaning birth of a child and extending of a family.

It is generally believed rabbits are very positive sign for families.

Rabbits in dreams represent fortune, birth of a child and pleasant family time. On the other hand, they could represent personal fears and insecurities;

However, since rabbits are thought to be timid, fragile and easily frightened creatures, seeing a rabbit in a dream may represent a reflection of a person’s worries and insecurities in waking life.

As a dream symbol, a rabbit usually reflect irrational fears, anxiety and completely unnecessary worries we could live without.

Beliefs about rabbit’s foot lucky talisman probably originate from European pagan times. It is known Celts had associated rabbits with good luck and they first carried whole animals for fortune attracting purpose, not only their feet;

Rabbit talismans have always been popular items in many cultures. Belief about fortune bringing rabbit foot still lives on, even in modern society.

It is believed that if a person carries a rabbit’s foot, he or she will have more luck and fortune in life.

Happy Easter bunny is known all around the world! We buy chocolate Easter bunnies, chocolate eggs, decorate our Easter egg baskets with rabbit figurines and other trinkets, but relatively small number of people actually understand why do we do that!

Eastern bunny origin can be traced far back into past and times of pagan beliefs. It is somewhat strange that rabbits are so strongly connected to Christian tradition of Easter, when there are no mentions about them in Bible or other related Christian stories at all.

There is no mention about rabbits in biblical tales about Jesus Christ, his birth, crucifixion or resurrection, but rabbits are an ultimate Easter symbol for all Christians;

Ok, but how did rabbit became the Easter bunny? The story begins long time ago before Christianity developed. We have already mentioned how rabbits were seen and depicted in different pagan societies and what ideas, ideals and concepts have they represented.

The strongest associations, worth of both admiration and despise, were fertility, abundance, lust and greed.

In early times, Christians did not favor rabbits, thinking of them as symbol of lust and greed;

Early Christians were not in favor of rabbits at all. They have seen Romans loved rabbits and their meat, believing it will bring them a lot of children, fortune and wealth. However, they were completely unrestrained in their habits, wasteful and lustful.

In early Christian era, consumption of rabbits’ meat was even prohibited, in order to protect people from becoming greedy and immoderate.

Easter bunny symbolism is a mixture of different traditions and beliefs;

However, as time went by, rabbits have been incorporated in Christian tradition simply as symbol of fertility and abundance. The connection between Easter eggs and Easter bunnies can be found in legends about pagan goddess Eostre.

According to the story, she saved a bird dying from cold by transforming it into a rabbit, so fluffy fur could warm it up.

The rabbit have kept the habit of lying eggs and each springtime he would offer colored eggs to Eostre, as a symbol of his gratitude to the goddess.

“I’m late, I’m late, for a very important date!”, says the White Rabbit from popular children novel and Disney’s animated adaptation of the story about Alice, the girl lost in Lewis Carroll’s Wonderland. Does white rabbit have any particular symbolical meaning?

Of course it does. Animal colors are powerful omens in the realm of spirituality and symbolism. What does a white rabbit represents?

Like other white animals, white rabbits represent purity of heart, innocence, tenderness and grace. In addition, rabbits are particularly vulnerable and gentle beings, so these ideas are even symbolically stronger.

White rabbit calls you to enter the world you do not know yet, to risk and let yourself go off your fears. Funny, is not it, if you think about rabbits as timid and fearful creatures.

Well, they certainly hide some courage in their gentle souls.

White rabbits represent spiritual journey and adventure. Just as Alice had jumped down the rabbit hole, you should explore new opportunities in your life.

If you see a white rabbit or have a dream about it, which is probably the message it wants to share with you.

Rabbits are popular in both traditional beliefs and popular culture. They are portrayed as funny and curious book and cartoon characters, but they also have special place in many traditional customs.

If we summarize different interpretations of rabbit symbolism, we could agree several ideas stand out.

Therefore, we could say rabbits represent:

Rabbits are popular as pets, perhaps because they are so fluffy and cute. In general, rabbits are not as attracted to people as if dogs, for example, but much scientific evidence shows their presence is extremely positive.

In modern times, rabbits are commonly used in different forms of psychiatric therapies.

Some studies even prove their presence can help children and adults suffering from autism. Just the sight of these tender cuties will bring smile to peoples’ faces, that is for sure!

Rabbit totem is positive spiritual guide that teaches you to enjoy life, to be alert, to take care about your loved ones and be joyful. It brings luck and fortune and helps you better understand your own needs and desires.

However, Rabbit people have to be careful not to rush into things without deep thinking. Their nervous and unsteady nature could bring them misfortune sometimes.

Rabbit people feel the best when many people surround them. They love children, enjoy their friends company and usually live in large families. They consider their dear ones the greatest wealth on Earth!

These people are caring and loving individuals and they would do anything to please their loved ones. They are amazing parents and friends.

Rabbit people are optimistic by nature and they love to play around and enjoy life.

They try not to complain about problems and try to solve those on their own. Rabbit people laugh a lot and try to keep positive minds no matter what happens.

They embrace life with open heart and that is the main reason why they deal well with misfortunes. They rarely become desperate or depressed.

However, their naturally playful character also makes them somewhat impatient and rushing. They sometimes act only instinctively, not thinking at all about the odds.

If you are born under Rabbit totem, you should learn to be patient and to wait for the right opportunity.

Also, never do things in rush, because you could only mess them up.

Rabbit totem gives you great energy to do great things, but try to make the perfect balance in your choices and actions.

Rabbits are known as timid creatures, because they are gentle and small. Rabbit people are very emotional and vulnerable.

They smile a lot, but once they are hurt or disturbed emotionally, they could sometimes find it hard to calm themselves down. In addition, since they make strong connections with other people, they get vulnerable if alone or abandoned.

Despite of dealing well with other problems, they feel extremely fragile if they are alone. Sense of unity and community gives them strength to smile on.

Rabbit individuals are very kind towards others and modest in their demand. Rabbits are associated with lust, but that is not a trait characteristic to rabbit people, in terms of material things, at least.

They are passionate and they easily find happiness in small things in life.

They know it is important to value them. Rabbit people are well aware kindness is rewarded with kindness.