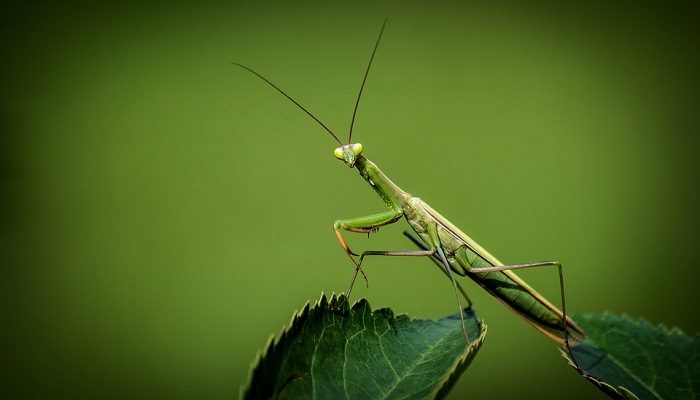 Praying mantis is an unusual, outstanding insect that has fascinated people since ancient times. This strange, remarkably looking bug is easily recognizable because of its long, somewhat angular body, folded front legs and triangular head.

This interesting creature is so different from us, just as many exotic and local insect species are, so we keep being amazed by their elegant and specific moves.

Praying mantises have been admired and worshiped in different parts of the world and there are many stories and interesting facts about them.

In Kalahari Desert, for example, praying mantis has a status of deity and it is considered one of the oldest gods for Bushmen people. In fact, they think of praying mantis as an incarnation of the supreme god who rules over the world.

If they see a praying mantis in wild, they would always try to interpret its behavior as a hidden message from heavens. Praying mantises have a high status in ancient Chinese tradition, as well.

Chinese people admire praying mantis for its sophisticated, slow and elegant motion. They consider this divine insect patient and contemplative.

They believe praying mantises are true masters of higher knowledge and wisdom, since they are a natural example of balance, which is seen in their calm behavior.

Apart from these, there are other beliefs and superstitions about praying mantis, which we will mention later on.

Praying mantis is an insect inhabiting almost all corners of the world, but most of the species inhabit tropics. It is a common insect and yet it still fascinates us every time we see it. Praying mantis appears strange and unusual to many, repulsive to those particularly sensitive to bugs or individuals who suffer from phobias related to insects.

However, we must admit this creature looks incredible, almost like an alien.

Praying mantis is truly impressive creature. It looks like it is praying, because its front legs are folded in a manner that mimics humans’ praying gesture. 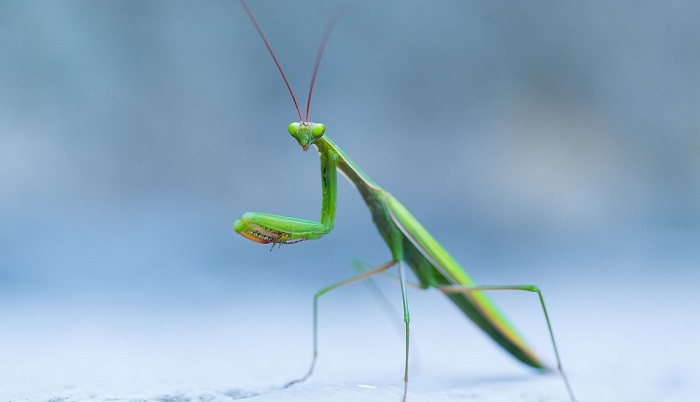 Its motion is slow and gentle, sophisticated. Praying mantis’s actions are always carefully thought through and calculated. It never strikes its prey too early or does something in rush.

Female praying mantis also has a particularly nasty ‘habit’; it often devours its partner after mating. This phenomenon is interesting in both biological and symbolical sense.

Intuition and clairvoyance – Praying mantises are considered very well balanced creatures. It is something in their tranquil motions that make us think of them as mystical and divine.

In many societies, praying mantis is considered an important messenger of the forces unknown to our mind; energies and vibrations we are not meant to consciously comprehend and understand. It is believed praying mantis has a secret connection with the Unknown.

Praying mantis symbolizes intuition and clairvoyance. Chinese, Japanese, Korean Peninsula people and other familiar peoples would keep them as pets and examine their fascinating silent movement that possibly hides patterns of some greater power running through their bodies.

Therefore, praying mantis is associated with clairvoyance and intuition.

Patience and mindfulness – Praying mantises are considered thoughtful and patient creatures. Observing members of this insect family in nature, you could notice their every move is carefully prepared. These predator bugs have evolved to be calm and calculated.

Its body is designed for such a tactic. Praying mantis would patiently wait for its prey and strike when one hundred percents odds are in its favor. Losing the prey because of rush is a good lesson to praying mantis.

This is a significant trait of these insect, for which they are highly admired. Their tranquil and patient strategy often shows as successful. In symbolical sense, praying mantis represents patience, calculation, and mindfulness.

Combined with the gift of powerful intuition and instincts, this makes praying mantis a dangerous and clever hunter. This is important for symbolic interpretation of praying mantis as spirit and totem animal.

Intelligence and wisdom – As we have mentioned above, praying mantis would always calculate the odds before an attack. It wants to be completely sure of the following success. Patience has always been associated with intelligence, especially with wisdom and higher knowledge.

If we are able to be devoted to learning and gathering knowledge, we must be patient. Only with time, the true wisdom arrives. Praying mantises are a natural embodiment of these concepts and ideas.

Did you know praying mantis is actually one of the most intelligent insects on our planet? They are. They are cold blooded and extremely patient hunters, always planning before an attack.

Apart from that, praying mantis is fearless creature and it hunts other bugs and prey with almost one hundred percent success. To achieve such result, they have to be smart enough. They are a great example of highly intelligent insects. Therefore, they are tightly associated with these concepts.

Awareness and stillness – Praying mantis are able to stand incredibly still while hunting, the characteristic connected to their sense of the importance of patience. They are alert and always aware of their purpose.

While hunting, praying mantis is calm and calculated, because it seeks only to fulfill its goal of catching prey. They represent awareness of the greater purpose in life, of the importance of destiny and natural chain of events. This is also associated with concepts of development, evolving and progress in general.

Satisfaction and fulfillment – Praying mantis has evolved so that it could achieve its only goal – to be well fed and completely satisfied. These insects are fully dedicated to that goal. They are able to be still, patient and waiting. They do not take a risk, but act when they are very sure about the outcome.

There is another interesting information about praying mantis’s desire for satisfaction. You have certainly heard about its strange and somewhat scary habit of killing its partner after mating. This is what female praying mantis does regularly.

According to some scientific research, this strange habit has a single purpose – to provide food for its offspring (amino acids from eaten male are absorbed by little ones, the research suggest). Praying mantis devours its partner in order to provide for its progeny, not out of hate, aggression or anger;

As we could easily conclude, everything praying mantis does as specie has a single goal. It constantly seeks for satisfaction and fulfillment. These insects are thus extremely resilient and enduring as specie. It is believed praying mantis is able to sense the real satisfaction after catching its prey, as well.

Therefore, these incredible creatures are powerful symbols of satisfaction and fulfillment.

Balance and peace – Praying mantis is highly praised for its balanced nature. It represents balance, peace and harmony of life. Everything it does is in complete harmony with its evolution and natural processes.

Even if this cannibal insect could appear scary and unusual, its nature is tranquil, careful and calm. Chinese would keep them as pets and study its calming motions in search for inner peace, spiritual energy and serenity.

Praying mantis as a totem and spirit animal

If a praying mantis comes to your life, you are truly blessed. This creature is valued as a powerful totem animal. As we have mentioned, in some cultures and traditions, these insects have a status of deities. As a totem animal, praying mantis could teach you many useful skills and things.

Probably the most important lesson from praying mantis totem is an achievement of inner peace and calmness. Praying mantis people feature many positive and highly valued traits. They could be:

Praying mantis people are usually very intelligent. They are always in search for higher knowledge and they want to develop their skills and widen their perspective.

These individuals are highly aware of their own competences and they know how to use them. They are not easily tricked or deceived, because they have very good intuition and sense about the world around. These people would never rush and they are not likely to take risks.

However, they rarely miss good opportunities; they are alert and aware of their environment and surroundings, so they could easily recognize the right moment to act.

They are not easily satisfied, so they are always completely dedicated to achieve their goals. These people are familiar with the idea of ‘all or nothing’. However, they are good planners and great strategist, so they are usually successful in their work.

This powerful totem brings you individuality and personal evolution. It teaches you to discover your deep instincts and polish it so you could actually use it in reality.

If you carefully listen to your praying mantis totem, you could get exceptionally aware of your own abilities; your intuition will become extremely sensitive and useful, so you could achieve great thing without unnecessary steps.

Praying mantis teaches us to be patient, self-conscious and devoted to our ‘mission’. Try to balance all of these qualities, but stay in touch with people. Some people have hard time balancing these gifts, so they become isolated, too proud or narcissistic.

Praying mantis teaches you to overcome your fears and inhibitions. It helps you find balance in your life and make good plans for your future. You should not rush or look to foreword. Use your skills and apply those to given circumstances, for the best possible outcome.

These martial art styles are quite old; they are created around mid-seventeenth century and both are kung-fu sub-styles.

In Greek language, term ‘mantis’ stands for a prophet. These insects have folded front legs that make them look as if they are praying. Christian tradition has the same interpretation, as well as Islam.

However, the real purpose of their special forelegs is to catch their prey. These insects are masters of camouflage, being brownish or green and easily blending to their surroundings, which is another advantage associated with their predator nature.

In France, it was believed praying mantises were magical creatures helping lost children. According to old French folklore, if a lost child sees a praying mantis, the insect would point it to the direction of their home.

In many African traditions, praying mantis is a lucky bug; it is a symbol of good fortune. Therefore, some African peoples believe it is a good sign if a praying mantis lands on your body. Bushmen believe praying mantis possesses magical powers, so their feelings for this creature are ambivalent. They would rather not touch the insect.

In Japanese folklore, praying mantis has a dual meaning. It could be interpreted as a symbol of great courage and fearlessness, but also cruelty and merciless.

According to some specific Japanese beliefs, seeing a praying mantis could have a negative meaning; they believe it is a sign of death.