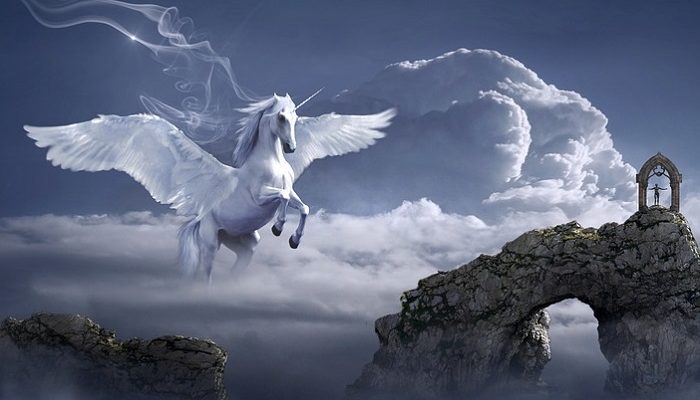 We all know that the horse is one of the beloved animals that humans succeeded in taming – and it is the animal that is loved, even adored for a long time, even today.

In almost every symbolism system, every culture, in every part of the world, in every religion, the horse has been the representation of power, strength, freedom, endurance, and elegance.

Everything that is high and enlightenment in some way is the part of this admiration.

It is therefore not remarkable that horses occupy a pivotal place in the history and mythology of almost all nations, and that has always been a motive to both literary and artistic creators.

The horse has always been linked to man’s sexual energy, which manifests itself as a part of Universal energy, and by this, we speak of energy that creates the world, as it is.

Now, we come to the most loved, most admired, the best of the best, the highest ranked, and the most beautiful of all – the winged horse Pegasus.

He is the most prominent horse and the most famous representative of its kind – fast, beautiful, kind and reliable at the same time.

A white, beautiful horse with wings is a symbol of what is obtained as a result of a transformation of that basic energy that rises to the head and turns into the purest form.

Pegasus is the horse that can, as the mythology suggests, fly with the speed of the wind had mighty wings and powerful hooves, and Pegasus duty was to bring lightning to Zeus (the supreme God in Greek mythology, the Creator of everything else).

In some other meanings for humans and their connection to this mystical being is that people can expect some tremendous gift and it is considered to be the carrier of joy, good health and unexpected income. 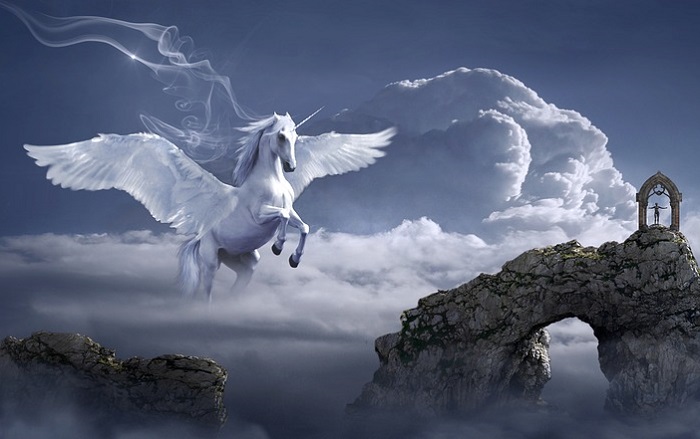 You should look at Pegasus as being that carries a piece of good and unexpected news that is by the rule good for you and your life in general.

It is never a small gift or a little surprise – it is once in a lifetime.

Riding a Pegasus in a dream or in a vision, for example, means you are expecting great success and a lot means happiness in the family.

But a Pegasus who is black it means some form of embarrassment or, in life, there can be a great inconvenience to you.

It is also said that if some human tries to tame Pegasus – should be prepared for a scam from his loved ones.

If the Pegasus is running or is in a gallop is a symbol of sex- and we are talking here about true potency and such energy that moves the mountains.

Any wrongdoing with this noble horse means that you can expect failure.

If we want to focus our attention to Pegasus horseshoe, it means that a person needs more freedom.

So, as many cultures believe, or as in many societies, Pegasus is the famous winged horse, which was the child of Poseidon and Medusa.

For a long time, he was in the womb of his mother until he was delivered rubbing his head, and in turn, Pegasus helped Perseus to emerge as a winner in a great battle with the sea monster.

After that, Pegasus settled down at Olympus where he helped Zeus blow up lightning and thunderstorms.

In mythology, Pegasus is a winged white horse of Revelation, a white being in the heavens and a white being of memory within man because it represents the human memory centre.

And here we come to one of the most interesting aspects of Pegasus -in some depth analyse, he is the holy being and an inspiration for many.

Since he is connected to Zeus and Medusa, he collects the best out of the two worlds – he has the strength of the one and the art and beauty from another, just like a perfect connection of the male and female.

The main thing, when we speak of the Pegasus symbolism is the fact that he did not exist physically, but that he is the symbolic property of thought patterns of the human psyche.

Pegasus is also seen as a representation of the immortality of the Soul and as a protector and bearer of the Spirit who protects them on spiritual pilgrimages.

Pegasus is a symbol of the power of creative Spirit in all of us -this is the main thing for all of us to remember, even if we haven’t think about this animal in this, in our minds he has all of these traits, and should be used in such manner.

The horses were symbols of strength and power in the Celts, and a white horse painted with chalk on Mount Uffington in the English province of Oxford is evidence of the importance that they then attached to them.

In every civilisation, the horses were devoted to the Gods world, and they were always seen as the expression of the primordial energy.

All around the world, they were the symbol of male power and fertility – the birth of everything in this world, the creation itself.

Now, in Greek mythology, Horse has been elevated to higher levels – as we have said that is created from Medusa’s blood when Perseus cut off his head. According to mythology, Pegasus is the one who brings lightning to Zeus.

As Greek mythology suggests, after Medusa died, as the symbol of the wrongly directed and corrupt mind in someone, the father of all Gods, the Zeus gods gives Perseus a mighty Pegasus horse, as the symbol of the Pure Solar Divine Mind, in order to defeat the ancient sea monster Chimera, which is a symbol of evil will.

So, in mythology, it is the one thing in all of us that represents the victory of good above evil, and our opportunity to live lives that are worth living.

Symbol of Good or Bad Luck?

Do not have a doubt even for a second that this could be a bad sign – seeing Pegasus is a sign of good luck – and just like the Zeus was riding on the back of Pegasus and threw fire lights through the sky.

This is one symbol that is almost completely connected to power, strength, success, and all things that are positive.

Symbolically, this is the sign of enlightenment that comes from God – or any entity that for you is the representation of the Higher force that rules and put things in the order.

Pegasus – is the lovely white being of the heavens is associated with the place in the brain, according to some experts, where your memory is, and it is the place which enables you to surmise what in fact means restoring the mind and achieving a new, expanded consciousness.

So, the Pegasus is something that is a symbolical way to a certain place, that is new and uninvestigated, but certainly, a place that will bring so many good things; it is the representation of a place where everything you know will be brought to a bigger and higher level.

If you were feeling lonely – soon you are about to meet someone who will show you love and take you to another level.

Or if you cannot decide what will you do in life, the true purpose will arise maybe faster than you expect, and in this case, Pegasus is the idea that will change your life forever.

Pegasus is a winged horse from an ancient Greek legend, and his legend has become a favorite theme of art and literature, and the flight of Pegasus is interpreted as an allegory of the immortality of the Soul.

His energy is the thing that helps you travel through different dimensions of reality. It occurs in meditation and dimensional travels that precede enlightenment. In meditation, Pegasus brings a clearer vision.

There is even one belief that claims that the power of Pegasus can be used to regain captured dead souls and direct them towards the light.

Pegasus is the symbol of radial energy that rises from the bottom, enabling enlightenment in one human being, or in many.