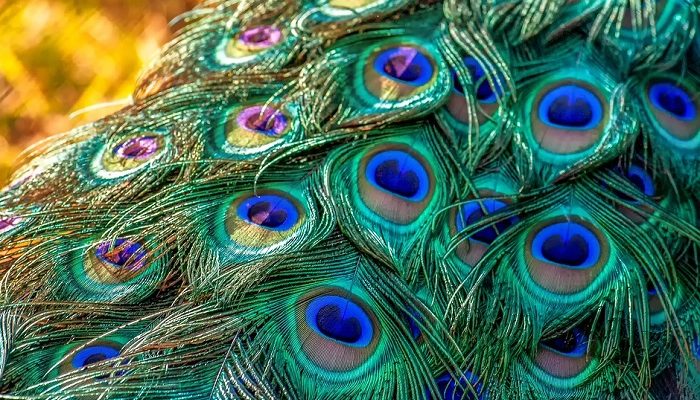 If you would ask anyone, what is the most extravagant, most beautiful bird, many will answer that it is the Peacock.

Peacock is a surprisingly large bird – it can reach up to 2 meters in length, and height from 86 to 130 centimeters. Their beauty and fabulous feathers is fascinating people all around the world, for centuries – the well-known species are Indian (blue), green and African peacocks.

All of them are equally beautiful and gracious, but surprisingly very strong; they always keep their head high, unless they are mating.

The female peacock has green, brown or grey feathers and they spread them in a case of danger or when they want to show themselves in front of a male peacock.

Male peacock has much more beautiful blue-green or green feathers decorated with an eye-shaped centre, and the multitude of colors we see when looking at the tail of a peacock is a result of the reflection of light from the threadlike constructions of his feather.

What’s also impressive is that the color of the tail changes depending on the viewing point -you are never sure what the true color of his feathers is, but all of them are equally amazing. He spread his feathers when he is hunting to pray, but also during the courting. Of course, as the tail is bigger and better, the male has a higher chance of success.

Having said all this, it is important to add that the bird itself is amazing, but what occupy our attention are its wonderful feathers – they are the transporters of many meanings and incredible symbolism.

Now, there is no doubt that Peacock is one beautiful bird, who is worshipped by many, but the fact is that an essential part and the most engaging are its color-changing feathers.

They are the ones that carry all magical that we connect to these birds – in them, there is so much to find.

But the question arises – what is the meaning of these colorful feathers? Do they mean something in our modern times? Maybe like in old China, if we look at their feathers we can get some luck in our lives, and if we find one of them, we can expect some material gain in our house?

Bird feathers, in general, have a significant role in many ancient cultures and traditions. To this day, there has been a belief that when a bird’s feather is found, it is a sign of higher force that is above us all and in particular, that with it we can understand spiritual messages from that higher force. And you can imagine what kind of power and spiritual potential the most beautiful feathers in the world have – it has the meaning of the source (of all things in the world), the birth of new ideas that are necessary for human growth, longevity, and love in the end. It’s considered to be a good sign of successful relationships and career. 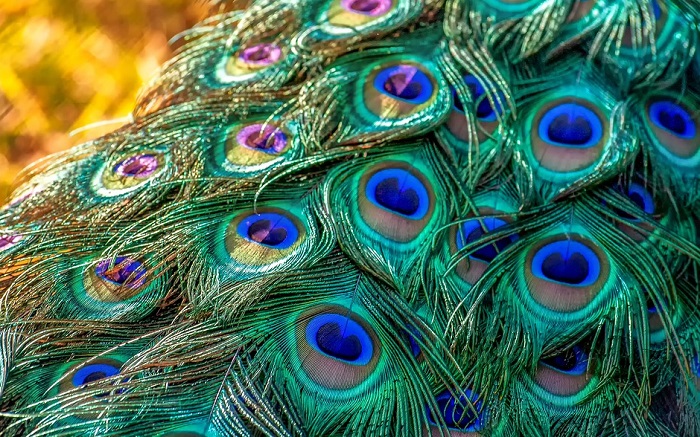 Alternatively, a peacock with its beautiful feather can also be a sign of arrogant pride and vanity – so it can be seen as a warning sign not to be overly obsessive with our look and things that are on the outside.

The Symbolism of Peacock Feather

The Peacock is unquestionably one of the most beautiful birds in the world, the one that has always attracted the notice of the human eye with its extravagant feathers and a smooth stroll that it has; it never pulls his head, and it is always so proud.

That’s why it’s no surprise for so many people the first association to peacock is a parade, that is, the desire to be at the centre of attention, and even more, the human desire to be loved, almost as a God.

However, the symbolism that this beauty carries with him goes far beyond the mere passion for physical beauty and includes many “more serious” terms such as spirituality, vitality and immortality. These three themes are always connected to its feathers – the beauty of the feather, its extraordinary look and the time it lasts whole.

This is the bird that has all traits that people want to have- the peacock feathers are related to glory, glow, life, good health, strength, and therefore expansion in almost all fields in life. So in this sense, the feathers are the representation of all things that people strive in life and fight for in life, and the sad fact is that we can never have it all.

It is the symbol of the highest knowledge and the feather, in particular, is a clear sign of alertness, that is, caution, and is therefore often used in meditations.

The feather is the symbol that others should take us seriously, that we have our own powers, and that no one could mess with us.

For peacocks, therefore, it can freely be said that it is a symbol of integrity and that by its appearance and behavior, it continually reminds the person how important it is to have the courage and to show the world its true colors.

The Peacock feather says – that it is ok to accept you for whom you are, and that we are all wonderfully unique. This may be the main message for its feathers symbolism – you should remember this every time you miss your confidence or when you are dissatisfied with some part of your body or soul.

Sometimes it is enough to accept your faults and emphasize your virtues, that is, all good sides and proudly carries them around, just like a peacock does.

Another message that comes from this symbolism is this – although he can act like an overbearing and untouchable bragging bird (a symbol of all people who act in this way), it actually carries a message of open heart, compassion and harmony.

His tail is open when he wants to show off all of his qualities – a symbol of sexuality, sensuality, decisive energy, optimism and elegance.

In the end, we must speak of one more symbolic aspect that is related to peacock feathers – if its tail is raised and his feathers are widespread, then it is the symbol of incredible happiness, connected to the development of new ideas and plans.

If the peacock has his feathers gathered than it is the symbol of risk and stress, but still his feathers can protect you from all the wrong decisions that you could have in life, and even more it can warn you that some dangerous situations are coming your way.

History of many cultures along with the mythology teaches us that the peacock shows a picture of the aristocracy, sanctification and protection of all negative influences that may come from the outside world.

As far as mythology goes, Peacocks are known in many cultures as the birds with a hundred eyes – in their feathers; you could see the stars, the Universe, along with our Solar system, everything that we consider to be our world. So, in Christianity, it is the symbol of omniscience.

In Greek and Roman world, Peacocks were considered to belong to the Gods, so they were held in temples. It is said that Goddess created Peacock from the eyes of her guard, who had hundreds of eyes throughout the body.

In Indian temples, there are many versions of Peacock motives and their feathers all-around – many Hindu gods are painted as riding on peacocks, and since peacocks sometimes feed and snakes, they were thought to swallow their poison by which they then create their multicolored feathers.

In Hindu religion, the peacock is considered a symbol of transformation, and it is also said that the peacock’s blood fights evil spirits and that its meat and feathers can be used to treat bites of snakes and other illnesses.

In China, Peacock appears as a secretive bird – it is represented as the symbol of the Ming dynasty, one of the most important in China history. In this country, the peacock is seen as a symbol of compassion and empathy, and it was thought that he died of sorrow after the death of his couple. The Chinese believed that a woman could get pregnant from the view of the peacock and his feathers.

So many rituals and practices are associated with the bird feather of any kind, and some say that the peacock feather should be sewn in on clothes-because it will be a shelter of any type of negative energy or magic directed. So, in this sense, this feather has a protective purpose, and it is possible that it can push away negative energy and give a positive shield for a person who as the Peacock feather.

It is said that every bird’s feather has its own unique purpose -during the specific times of the month, certain bird feathers are used for the rituals-cleaning of negative energies in the home and for neutralizing the power of the quarrel between the lovers and the married couples.

According to ancient legends and traditions, the feathers carry the energy of the bird in themselves, and when we find it, it is a sign of spiritual message and a clear indication of something significant wait for us in the near future.

The feather of the peacock gives protection from negative energy connects the person who has the feather with revival and reconstruction in his life that could be shattered to pieces before. It is said that this type of feather gives you an insight into the world and the Universe and that you are able to see what others try to hide from you, or the things that are not available for the majority of us, just a few chosen ones.

With the Peacock feather, you are protected from negativity, and you are blessed with strength so that when you fall down, you can rise up soon, stronger than ever before.

It brings happiness and joy, promotes success in work and career growth – all those plans you once had, now they can become a reality, and not just that, you will be admired for your success.

It is the symbol of immense pride, God-like immortality and out of this world beauty, thanks to his proud attitude and grace. A large number of eyes on his feather – tail is associated with wisdom that people would like to have in life, and are striving, but the road is not easy.

With his unique feathers, it is said that they, when are in the house or in the yard, protects the family and brings prosperity to all of its members.

As one of the most exciting and beautiful birds on the planet, the peacock has always brought the attention of people – and its primary symbolism is the inner desire of humans to be noticed and adored.

This fantastic feather that is the symbol of all things that we want to have in life should be put, as many suggest in a prominent place in the house; even more, if someone gives you this feather, it is the symbol that that person is loyal to you.

To sum up – the peacock feather, in a symbolical sense, invites us to open your hearts and allow someone to enter our hearts, regardless of our personal pride.

It is a sign of good fortune, prosperity, wealth in so many ways, but not just in a material form; and truth to be told, its feathers may warn you that around us are people whom we cannot believe, but that we should keep on going on, never putting our heads down.

After all, remember the peacock’s rays or its “all-seeing eyes,” and let them be your guide through life, in things that you do not understand, but you would like to. Be proud of who you are, and do not be shy to show off all of your qualities, whatever they may be.