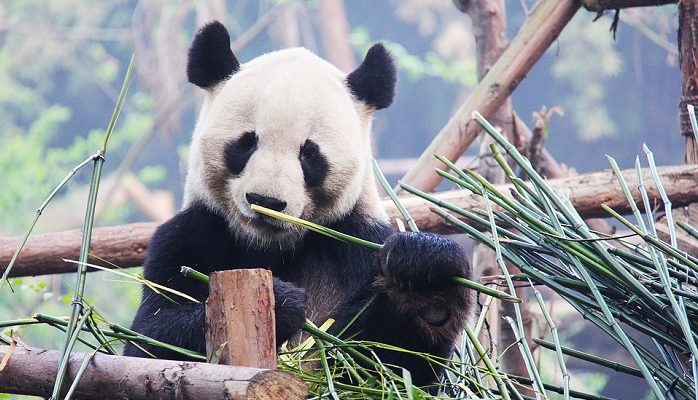 Panda bears are probably one of the strongest symbols for peace, diplomacy and wildlife conservation. These adorable black and white giants easily win our hearts with their calmness and adorable looks.

Giant pandas stand for one of the most threatened and rarest species of animals on our planet. Today, organizations engaged with natural conservation projects strive to increase pandas’ population in the world.

Those big, but gentle creatures are vulnerable to changes of the environment they inhabit. Decrease in pandas’ population over the years was mostly induced by a human factor.

Pandas are easily recognizable by their remarkable black and white coat, with specific patches of color. Their bodies are white, their legs, shoulders, ears, eyes and muzzle are black.

Pandas live in cold mountainous regions, so their fur is thick and warm. Pandas are large animals and an adult can weight up to one hundred and fifty kilograms. Pandas’ evolution make them specialized to eat bamboo.

Pandas have specially designed bones in their wrists, with function similar to human thumb fingers, and they have big and flat molar teeth for chewing.

These characteristics make them experts of eating bamboo plants;

Pandas do not have many natural enemies, because a fully-grown adult is far too big prey for most predators inhabiting regions they live in or passing across the same area pandas inhabit.

However, jackals or snow leopards would sometimes catch pandas’ cubs.

Generally, those predators only attack pandas’ young ones.

Pandas’ greatest enemy is human, who is to blame for cutting down woods and bamboo forests, seriously endangering pandas’ food resources and their natural habitat. 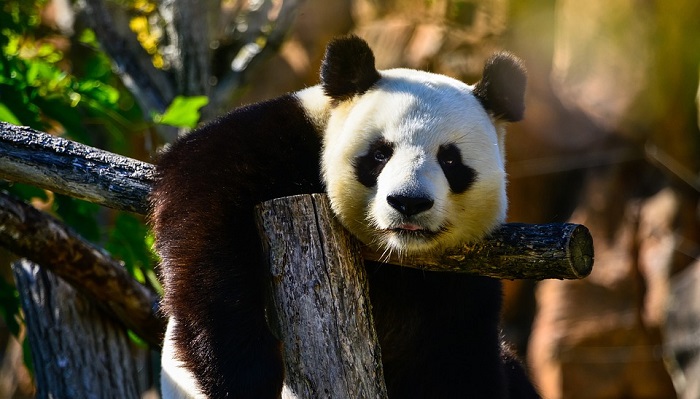 Why are pandas endangered species? Pandas are rare. They live only on Asian continent; they are to be found in China, its South and East, as well as in Vietnam and Myanmar.

Chinese government, along with the help of World Wildlife Foundation, puts a lot of effort to conserve the specie and increase pandas’ population.

Pandas are endangered because humans have cut off large parts of their natural habitat, in order to acquire raw wooden material to produce fuel, timber etc.;

Those lovely black and white giants feed exclusively on bamboo, which makes them incredibly vulnerable to loss of bamboo forests.

Pandas literally cannot survive without their favorite and essential food. The importance of preserving these adorable animals is huge. By saving pandas, we will save the richness of our planet, including other amazing animals living in the same areas.

Of course, saving pandas’ homeland is very important to humans who also feed on its gifts, without endangering its existence.

According to latest data, there are less than 2000 giant pandas living in the wild. During the last ten years, population of these precious, lovely giants has risen by seventeen percent;

Today, we see a significant increase in pandas’ population in China. Over the past several years, Chinese government had organized a network of sixty-seven pandas’ reserves.

An interesting action within this process was to place special bamboo passages in these areas, in order to allow pandas to safely move to new places, where they could mate and make offspring.

What does panda mean, in symbolical and spiritual sense? Let us find out what amazing traits are characteristic for these calm and cute bamboo eaters. These rare and precious animals are a true treasure!

They are so adorable and benevolent creatures, which we have to conserve on our planet, for many good reasons, including the preservation of our own habitat.

As a symbolic and spiritual being, panda is an interesting one. It is a spirit to love and respect, because it represents some of the most positive and valued characteristics and traits.

Panda motif is found on the logo of WWF, the most significant nature preservation organization in the world.

Until recently, pandas were commonly given by Chinese diplomats to friendly countries, as a symbol of peace, unity and friendship. This custom is still active, only today pandas are not given, but rented for a large amount of money.

For example, Berlin’s zoo hosts two adorable pandas for the next fifteen years, given to Angela Merkel by the Chinese president himself;

Panda motifs are often used to promote peace and harmony amongst people. In spiritual sense, this beautiful black and white animal has the same purpose.

It is an example of the purest forms of life, an embodiment of benevolence and good will. Pandas symbolize positive approach to life and hope for the best outcome, in all aspects of our life.

Although their population is endangered, is seems panda spirits remains positive.

Gentle strength – Pandas are large and heavy animals, but they are of a gentle nature. Their bodies are thick and very strong, but they would never attack other creatures if they have no reason to do that. Pandas eat only bamboo cane and they do not need to hunt down and catch other animals.

Their appearance is adorable and fluffy, but you are aware these black and white bears must be strong.

Pandas represent firmness and determination. It is strength of the highest value, perhaps. Pandas’ energy is concentrated in their big bodies, but never recklessly used and wasted away.

That is an important lesson for humans, to learn to keep your strength and use it when it is needed. Pandas represent gentle approach to life and the strength within tenderness. They prove you could be strong and delicate at the same time.

Good fortune and prosperity – Pandas symbolize good luck and fortune. These creatures are always associated with positive things, because they are so tranquilly and benevolent. They remind us to enjoy life and keep to positive thoughts, even if we found ourselves in a difficult situation.

Pandas never give up. They astound us with their relaxed way of life. Pandas are always a good sign, for example, if you dream about them. Pandas also represent abundance.

They patiently wait for their bamboo to grow. Once it does, it is usually abundant and pandas do enjoy it. Pandas bring abundance to people’s lives, in symbolical sense.

Patience and calmness – Pandas are patient and calm animals. They are not aggressive towards other living beings, a trait worth of admiring. Their strength lies in their patience.

They wait for bamboo forests to grow abundant in the wild, while in spiritual realm they embody the idea of patience itself.

Only patience could bring peace and harmony. That is probably one of the most valued panda spiritual traits, for which this animal is respected and adored.

Joy of life – Finally, pandas symbolize enjoyment and positivity. They love to roll over the grass and play. They may seem lazy and slow, but their nature is very playful.

They love to cuddle and hug. Pandas in artificial environment are friendly to humans and it is not a strange sight to see little pandas hug their zookeepers!

Panda as totem and spirit animal

As a totem and spirit animal, panda is a lovely one. It brings so much joy and positive energy to its pupil. There are many ‘Zen’ lessons you could learn from your Panda totem.

It teaches you to be tranquil and wise, to seek peace and harmony within yourself and the world you live in. panda totem guides you through life with joy and powerful optimism, despite all the difficulties you could face along the way.

Panda people are extremely positive, cheerful and intelligent individuals. They are:

Panda people have a positive approach to life and they are not easily shaken by outer influences. They always try to remain still and calm, even in the most difficult situations.

These individuals are often ‘the voice of reason’ in dramatic and chaotic situations that induce panic and disorder.

They are wise and intelligent and able to carefully observe situation, evaluate the circumstances and then talk or act. Panda people are natural born optimists and they would always try to find the bright side of every situation.

If Panda is your totem animal, you must be patient and determined person. Panda teaches us to wait until the time is right.

People guided by Panda totem tend to listen to their inner voice and it almost never fails them. They know sometimes things need time to develop and they never rush into anything.

Panda people are relaxed and easy to get along with. They are friendly and communicative and always prove loyal friends or partners.

They are also caring by nature, so they make amazing parents.

Their gentle nature could make Panda people overly sensitive to others words or deeds. They could be emotionally vulnerable and fragile, because they have strongly developed empathy.

Sometimes Panda people forget about themselves and get lost in the care for others.

For example, Panda parents would put so much efforts in caring for their young ones, to the point they neglect themselves; they same could happen to Panda lovers.

Try to stay true to yourself and nurture your own body, spirit and personality.

Pandas love to enjoy life. They love to cuddle, to spend time doing nothing special, to play around or else. They are not particularly active individuals, even if they are physically strong.

They tend just to go with the flow, which could turn bad for them. It influences their physical health and appearance, life opportunities and so on.

Panda totem offers you a great positive energy you could channel in a positive direction and make great things in your life.

Why pandas are black and white?

Pandas are probably some of the most beloved animals in the world. There are hardly other species people adore so much. Pandas are admired for their real life, spiritual and symbolical significance and the pure cuteness all over the planet, including great part of the world pandas do not inhabit at all.

Children simply adore panda bear fluffy toys and cartoon characters in every country you could name. Pandas are present in some Asian myths and worldwide pop culture, as well.

Here is an Asian folktale about how pandas did got their black and white coat.

Once upon a time, the supreme God had two snow white bears, living with him in the sky. Those bears had fur of the purest white, because all sky beings had only pure thoughts, unstained by earthly sins.

It happened that one day, while the God was sleeping, bears noticed a strange plant down there, on Earth (a bamboo). They sneaked out and came down to Earth to taste it.

Once they came down, their white fur started to get grey spots, turning to black. They were stained by bad characteristics and thoughts of the human world.

Bears loved the taste of bamboo plant so much, so they did not want to go back to the sky. Once the God woke up, he noticed what had happened.

He was not angry, but he wanted to clean his bears’ fur and make them white again. However, the influence of the human world was so strong, that even heavenly waters could not clean them up!

Those bears later had cubs with the same black and white coat. Humans discovered these new and amazing creatures and named them pandas.