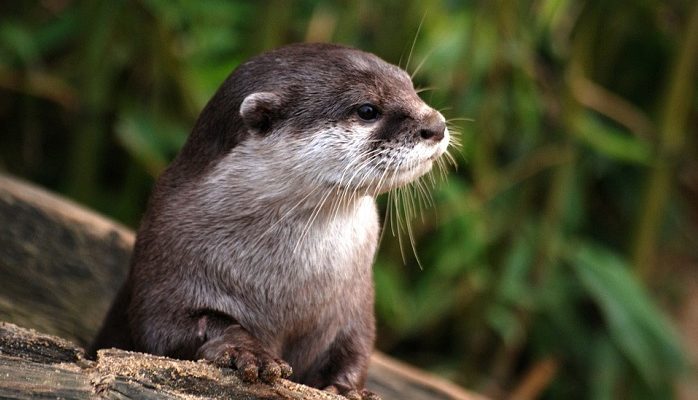 Otters are cute and small water mammals that work hard and know how to enjoy life. They are admired for their skills and intelligent nature. Otter is a great totem and zodiac animal in Native American tradition.

These lovely creatures usually live close to water; some of the species are marine, aquatic and semi aquatic. Otters are related to weasels, badgers, polecats and similar animals.

Otters look sweet, with their wide noses and cute dark eyes. Their bodies are slim, long and extremely agile, so they can move fast and swim as real professionals.

There are several species of otters, living on different parts of our planet. When we speak about animals’ symbolism, it is usually about North American river otters.

However, it is important to mention there are also European otter, Sea otter and Giant otter. River otters were heavily hunt down and killed by humans, after White man came and raided North Americas’ plains and woodlands.

Today, either law protects these cuties or they at least have organized shelters where they can be healed and taken care of, if ill or hurt.

Otters have been having important significance to many Native American tribes since past. Some societies identified themselves with this amazing creature and even considered Otter their clan protector; there are more than one Otter clans.

These people had invented amazing and inspiring stories about otters and other animals, portraying their natural traits and behavior in an interesting story. Here is one of the most popular ones.

This is the story about the Otter and the Crane, a legend that explains how otters got the ability to survive in cold winter waters.

The winter season was approaching and many birds headed south to warmer areas.

However, a little Crane was too young, small, and weak to fly, because these birds lay their eggs later than all others do. Mother Crane asked Otter if he could keep her young one safe during the winter, while she is away until spring. 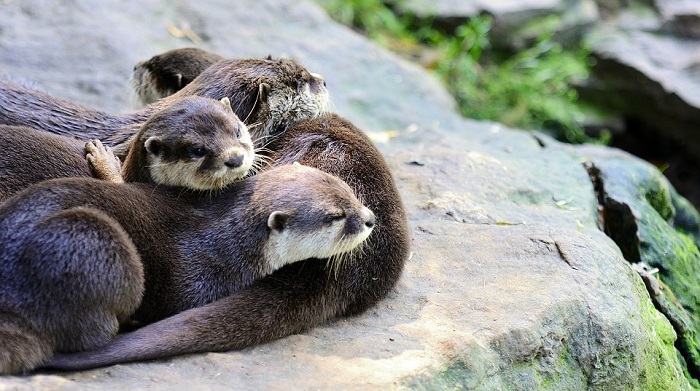 Otter promised her he would and that was exactly what he did. However, a vicious spirit Osni (which means ‘cold’) came one day, killed Otter with his coldness and took little Crane to be his servant.

In spring, the mother returned and searched for her young one. He told her what had happened to poor Otter who kept his friendly promise.

Mother Crane then found another otter and put a magic spell on him. She said that Osni, cold, could never kill him. That is how Mother Crane paid honor to Otter.

From that day on, all otters are able to endure incredible cold and swim in freezing winter waters.

Otters are truly inspiring little creatures. They are intelligent, very active and hard working. They are associated with many positive concepts and ideas, such as creativity, imagination and activity.

Otters are seen friendly and caring animals that nurture and protect one another and put a lot of effort in supporting their family.

Activity and movement – Otters are associated with concepts of constant movement and activity. They are unlikely to sit still; they rather move around all the time, doing something. They are usually engaged with building dams on rivers or anything involved with this job.

They enjoy running around and playing, as well. Otters are admired for these traits, because they are not considered slow or lazy animals. People value these traits and love otters for them.

Intelligence and cleverness – Otters are intelligent little creatures. They have to use their brains and their wits in order to survive and take care of their own. They are skilful and know how to protect themselves by building amazing structures out of branches and other material.

Humans are still amazed by their construction skills, which clearly suggests these animals are very intelligent.

Otters have to be precise and tactful, in order to build such impressive river dams. Just imagine an architect constructing a new building! That is exactly what otters do. They do not have any drawn sketches and plans; they have it all in their heads and senses.

It is truly amazing, don’t you think? That is why otters are commonly considered symbols of creativity and intelligence.

Devotion and loyalty – As we have seen in a myth about otters and cranes, these little mammals are loyal companions. It might be a story, but in their natural habitat, otters are truly devoted parents and they are always associated with the idea of family.

They are protective of their young ones and they are social animals. They are playful, joyful and of a good spirit towards one another.

Hard work and effort – Just as beavers and several other ‘builder’ species, otters are seen ultimate architects and workers. It is completely breathtaking to see how they collect branches, put them in a precise order, and make structures that could endure even the strongest river flow!

Otters are truly devoted to their task, in order to secure their habitat. They are hard working in every possible sense. These animals are strong symbols of dedication, progress, work and success.

Endurance – Otters may appear cute and relatively small, but these animals are quite hardy, durable and adaptable. They could spend long time in freezing cold water without any harm. They are well adapted to seasonal changes and able to survive.

They are also good teachers and pupils, as well. They always take care their young ones learn to swim perfectly, in order to take care of themselves once they grow up.

Otter as totem and spirit animal

Otters are cheerful and curious totem animals, with great qualities and impressive skills. You could learn much from them, indeed.

If you are born under totem of Otter, you must be a positive, bright character who loves to create and play, but would work really hard to achieve their goals.

Otter people are imaginative, playful, intelligent and devoted. They could be curious and usually love to live near water.

Otter people love to spend time with others and exchange their experiences. They are on a constant move, doing their job, creating something or expressing themselves in another form.

They love sea and water; they are highly imaginative and often engaged with some creative work. Otter people are also amazing strategists and they always have new, practical and inspiring ideas.

They are excellent to work with, because they are true team members. Otter people are individuals who usually come up with a new and incredible idea of some project. They are naturally interested in construction or design, or both.

Otter people are cheerful and playful individuals. They know when they have to be serious, but most of the time they love to play and just enjoy life. They are funny and amazing friends, people you love to spend time with. They have an amazing positive aura around them and usually love to attract attention.

If you are born under Otter totem, you probably love social events, meeting new people, traveling and searching for inspiration.

Since otters are symbolically associated with devotion and family, Otter people are considered passionate lovers and good parents. They are protective, but not over the border.

Otter people make sure they give their children the best they can and teach them many useful and important things in life. They express a lot of love and devotion, but do not spoil their kids.

When an otter person puts their mind into something, they are unlikely to give up. They see everything as a construction to build and put all the pieces together.

They do not despair if things do not go as they have imagined, but they put their effort in order to make it their way.

They are able to rationally evaluate the situation and adapt to new circumstances. They are flexible life path builders, which is an incredible characteristic to have.

Apart from these, they could also be:

These are traits that could be seen both as positive and negative, depending on how you channel your Otter energy.

Otter people are naturally very curious, sometimes to the point they play with fire. It is exactly the same as that old saying about how ‘curiosity killed the cat’.

Well, Otter people share that trait with cats. If you are an Otter person, just try to understand where to put the line. Try new things and explore new ideas, but be cautious!

Sometimes, Otter people get too dedicated to their work, so they forget everything else.

They could even neglect their natural playfulness and act like a machine. It is amazing you are able to fully devote yourself to creating or doing something.

Just stay in touch with your more cheerful and relaxed Otter side.