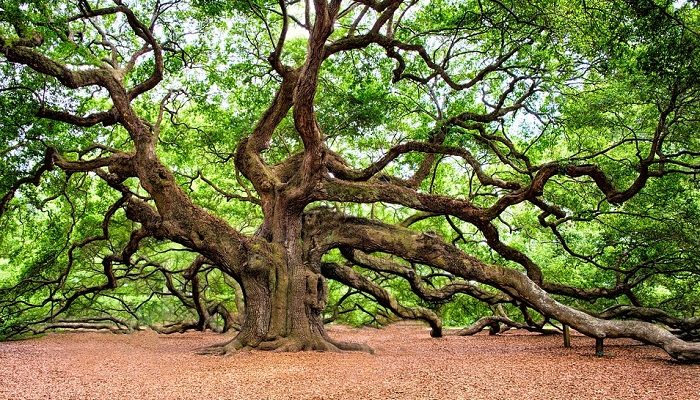 Every aspect of our Universe is connected to another – just as each character or planet is assigned a specific flower that characterizes it and is astral influenced by a particular sign and planet, and therefore belongs to an individual from a particular group of characters, so each Tree has its own sign and its own planet, which then classifies it as appropriate to a particular individual, and offers them their energy influences, so they can be connected much more easily through life.

What is important is to create harmony and balance in life, because that is essentially the basis and meaning of life, since only in balance and harmony can one reach the goal contained in the word happiness, and be happy, which is a term in which all desires are created.

In today’s piece, we are talking about the Oak Tree that for so many people represent one of the most magical trees in the world – it reminds us of strength that we all should find in ourselves, and its “fruits” are also amazing and magical, used in different rituals and ceremonies.

Read more about this interesting Tree and its meaning and symbolical value.

For the beginning of this piece, we are talking about one of the trees that could be found in some completely different parts of the world, and in all of them, it is equally worshipped and adored.

This Tree belongs to the group of threes that could last for hundreds if not thousands of years, standing still, as the silent witness of the years that have passed.

It is no wonder why so many people compare it with the God itself or some kind of its representation – he is tall and wide, he is “old”, and in some parts of the world, this is the place where people pray and bring the sacrifice.

So, the Oak tree is the symbol of strength, power, longevity, fortitude, spiritual and material wealth, and the oak tree has long been admired by the people since ancient times.

It always surprises people with its appearance and was used abundantly in the mythological stories, old tales, and if you look at any book, you could see the description “under the old and powerful oak tree….”

But we must speak of some other traits that are contributed to this magnificent Tree, it is confirmed, and known for a long time that it has amazing healing properties that were used primarily in some magical rituals, and today in proper medicine. 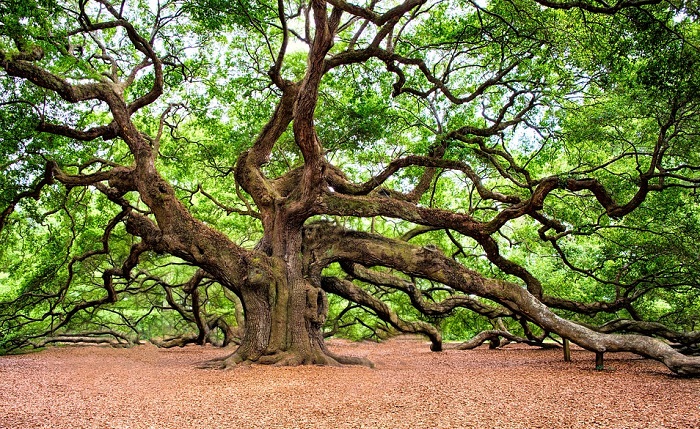 Its fruit acorn is considered to be an amazing remedy for glands and for blood system as well – people sometimes drink it in the same way they are drinking coffee. In the old days, the oak tree and its product, the acorn was seen as the food, in the times where there was enough of it.

Its bark is also multiple beneficial, and it was used for nutrition and healing. There is virtually no part of this magical Tree that could not be used in some good purpose – so praying beneath this Tree is not so crazy; if you know that nature gave this Tree so many amazing qualities, it is no wonder why people listen to what this Tree has to say.

In some parts of the world, as we have said, the Oak Tree was the Tree that is connected to the Gods, in some countries it was the specific one God, or many gods, and in Christianity, it was dedicated to the God of Lightning and Thunder, and it was believed that such Tree has an amazing strength and that it could provide protection during the bad weather – hide under the Oak Tree (others like to say that sinners will be burned and that all others will be protected).

This grandiose Tree is full of positive energy that anyone can feel when it is in its immediate vicinity.

The Symbolism of Oak Tree

The Oak tree symbolizes strength, protection, resilience, solidity, truth, man and the human body, and as we have said in the previous section, it is mainly associated with the deities of thunder and the thunder itself, as well as the celestial deities and fertility deities and can, therefore, represent both fire and lightning.

It can be a symbol of protection and healing, but at the same time, it can be the symbol of justice – all those who were wrong and sinners will find their end under the oak tree.

In other symbolical value, the Oak tree represents masculine strength and virtue, and therefore, it is often used in homes – when people moved into the houses they find a way to have this Tree near them, so they are creating furniture that is made from this Tree. It is considered to be durable, beautiful and long-lasting.

Now, we have some to one of the most interesting symbolical values – Native Americans believe that this Tree is the representation of the

Mother Earth, Nature itself. She is the Queen and the Ruler of all things that find their place there, and subsequently, she is their protector.

Celtic tradition speaks that the Oak tree is dedicated to the creator, and is considered a sacred tree. In Chinese symbolism, the Oak denotes masculinity but also weakness in strength, resilient to life changes and finally broken in the storm, as the opposite of willows and bamboo – strong in weakness – which bends flexible in the wind and survives.

How amazing is this, and a similar principle could be found in some other traditions – where this Tree is also strong, but it signifies the feminine principle.

In Greco-Roman culture, The Oak was dedicated to Zeus or Jupiter – both are the ruling Gods in those traditions, and the symbolism could be found in other cultures that come after Greek and Roman. Jupiter’s wedding to the goddess of Oak, Junín, was celebrated every year in the oak grove, and the participants of that celebration wore oak leaf wreaths on their heads.

The same crown was awarded as a reward for saving one’s life and as a sign of victory in the Pit Games. Oak symbolizes Cybele and Silvanus.

In Jewish symbolism, the covenantal arch was made of Oak. In the Hebrew tradition – the Oak is the Tree of the covenant and signifies the divine presence.

In the Scandinavian and Germanic traditions, the Oak is the Toro tree of life and is also dedicated to the Donor. Oak groves were the place where Germanic rituals and ceremonies took place – this remains the secret Tree even till this day, and the same case is in the Christian symbolism, the Oak is a symbol of Jesus as a power in times of hardship and turmoil.

He represents perseverance in faith and virtue – the virtue to sustain all troubles that are about to come, and that are so hard and beyond compare.

During that time, such Tree stays strong and does not move in any direction, deeply rooted in the ground, reminding us symbolically that the temple of God is inside of us.

The mighty Oak is the king of the forest, and most of us would agree that there could not be found such a stable and planted tree as this proud symbol of nature.

The Oak is a symbol of strength, survival, courage and honor, and it is said that when the Oak invites you, it’s time to recognize the courage and heroism within you.

Now, you should regard such a tree as the positive symbol that could truly change the way you look at life -and it may give you the energy to endure whatever problem you may have in your life.

Whatever you are afraid to accomplish, that fear can be overthrown by your determination and conviction – this is the main message that comes from the energy of the

Oak tree, and it is something you should remember at all times. If you feel weak or powerless in something, there is always a way to overcome the problems.

Some say that the Oak tree summons people to overcome all your anxiety, stress and nervousness. We all come from nature and are made of the same materials, so in this sense, we are all one.

There is nothing to fear but fear itself. Stand upright and confident, just like the Oak Tree, and when you fill that you cannot go anymore, ask it for some advice and guidance, surely it can help you.

We could write a book based on the good traits that are connected to this amazing Tree that has so many amazing qualities that are beyond any comparison to any other tree – this is the one that is worshipped all around the world, regardless of its kind or species.

It is highly recommended for people to burn the oak leaves to clear space and cause disease. Also, its fruits are used in all rituals to increase fertility and sexual power. From his Tree are made talismans for protection and many people carry them around with themselves all the time.

Oak is a sacred tree because it symbolizes longevity and power. It has great application in medicine. There is a belief that the hollow of the oak trunk hides what we want most, and if we are believers, we can find out what it could be. This Tree has always been given a special meaning.

Oak has special magical properties that are most pronounced during one day of the year, and this is the time of the year when you should pray under it for the maximum usage of its properties.

Oak has a special spiritual power that is believed that it can take us to some other dimensions that we could not meet in any other way.

He also has healing powers, that are proven to help people, and much modern medicine is made from it.