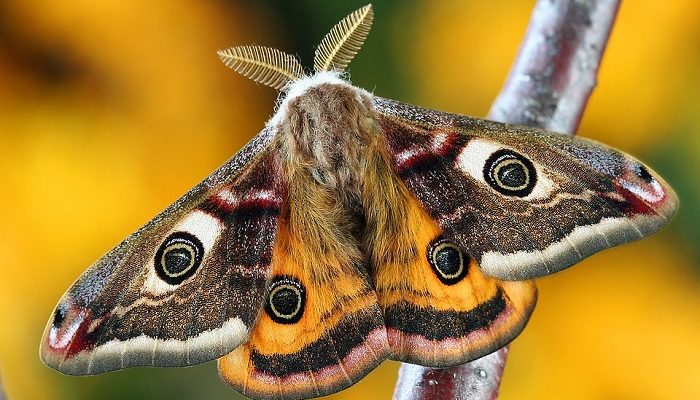 Moths are insects similar to butterflies, so their symbolic meaning and interpretation is related to those of butterflies.

They, however, possess some characteristics for which these are particularly interesting, especially in a symbolical way. Most of them are nocturnal creatures, which adds special significance and an additional meanings.

Moths represent many things, including light and darkness both, fragility, sensuality and seduction, but also damage, death and afterlife.

Moths are delicate insects related to butterflies, so their symbolism is similar, with an addition of specific characteristics for which the former are recognizable;

These silent nocturnal insects are considered either fortunate or terrible. Humans have use of them in economic sense, but they are mostly regarded as pests.

Moths have gained notoriety for eating our clothes and all sorts of fabrics.

However, there are hundreds of thousands moth species and many of them drink nectar or feed in another way, not damaging our things at all!

Other species are considered useful; you certainly know about the importance of silkworms that also belong to the wide moth family.

Did you know there are about 160 thousand of moth species? Many of them actually do not eat fabrics at all, while others are economically useful;

The origin of moths’ name is supposed to originate from Old English word describing larvae and referring to their unpleasant habit of eating people’s clothes.

However, let us discover what moths symbolize. Their symbolic meaning is some sort of mix of butterfly symbolism and symbolism of nocturnal creatures.

Moths are associated with duality of light and darkness, with flames in the night, magic and mystery. 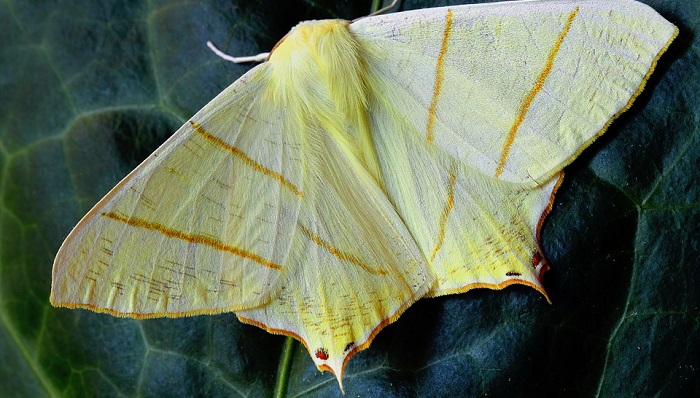 As we have mentioned, moths are close relatives of butterflies. Both of these gentle flying insects are featured in traditions and belief systems all over the world.

While butterflies are generally associated with concepts of purity, beauty, innocence, love and lightness. Moths share some of those, spiced up with darkness.

When talking about butterflies, we usually think of colorful winged insects, flying from a flower to a flower, feeding on their juicy nectar and filling our hearts with joy.

On the other hand, moths are nocturnal, thus ascribed some mysterious and dark powers.

Moths have an incredible spiritual energy, similar to that of butterflies, only coated by darkness of the night;

Insects belonging to this vast group in general symbolize human soul, transformation and spiritual journey. They are also associated with tenderness, vulnerability and freedom.

These are concepts spiritual interpretations of moths and butterflies have in common.

Let us discover what do moths specifically represent.

Vulnerability and sensuality – Moths are gentle insects, just as butterflies are. Their fine, thin wings are very fragile and tender. They are sensitive creatures, responding to seductive forces from natural surroundings. It is so common to say a person is attracted to someone or something ‘like a moth to the flame’.

It seems moths have some special sort of connection with light, with sparkling flames chasing the shadows away.

Being attracted ‘like a moth to the flame’ is one of the most common sayings all around the world;

These insects are fragile and they risk damaging their sophisticated wings flying so close to the flame. They represent sensuality and divine beauty of light and purity.

There is no such thing as pure and shiny as flames are. Moths seem to have a natural need to feed on that light, something a sensitive person completely understands.

They symbolize our pure heart and a need to bring sunshine in our life.

Seduction and passion – These two concepts could be interpreted separately or together. Speaking about seduction, it does not have to be seen bad. Flames seduce moths; they seem to be addicted to it. This may be interpreted as a fatal attraction, a passion, love and complete devotion.

There are many theories on moths’ attraction to flames. One of them says moths are actually attracted to the Moon, because they use it as a navigational point.

Another theory claims they it is an escape mechanism, because they would naturally seek an escape in route towards the sky, where the lights are (strange, isn’t it, when you think of them get burned by flames!).

The theory about why do they stay at light source for so long says their dark adapting mechanism is much slower than ours, which means they would end up blind for much longer then us, after leaving the shiny environment.

On the other hand, such addiction often leads to bad end, as every form of exaggeration does. Whether it is a fatal love or some form of material addiction, it is devastating.

Moths sometimes evaluate their distance from the flame badly and get themselves burned. That is the reasons they symbolize an irresistible seduction.

They are unable to resist the seducing lights, just as people often find hard to break habits that bring them harm, adore others to the point of forgetting about themselves and so on.

Death and darkness – It is somewhat strange these delicate gentle insects are associated with death, but this interpretation is common in different cultures around the world. There are even species specifically associated with death and misfortune. This notoriety moths have to thank their nocturnal behavior.

However, the truth is this nocturnal creature is completely benevolent to humans.

Death’s Head Hawk moth is the specie strongly associated with death, because it has a recognizable skull-like pattern on its body.

This type of insect became (in)famous in one of the most popular horror movies ever, ‘The Silence of the Lambs’;

In many European societies, a moth represents death and misery. For example, it is believed that a newborn child will die if a moth lands on baby’s body. No such thing ever happened, of course.

However, since moths are nocturnal and night darkness is commonly associated with death and regarded as a period of the day when dark forces are active, moths have gained such symbolical notoriety.

Disguise and adaptation – Moths are known for their camouflaging skills. Unlike butterflies, moths are not so colorful; their wings are dark, brownish, grey or so. They could easily blend into their surroundings and be unnoticeable. This characteristic is certainly a natural mechanism to keep away from predators and escape their eye.

People have been admiring this moths’ skill since ancient times. That is one of moths’ characteristics they are worshiped for.

Moths’ ability to perfectly disguise themselves and hide is often interpreted as a symbol of perfect adaptation.

Moths are true masters of that skill. In spiritual sense, it is seen as an incredible power of physical and mental adaptation together.

We have to learn how to adapt to circumstances we find ourselves in, in order to get the best from the situation.

Sometimes, we simply need to fit the circumstances, in order to have the opportunity to understand the greater plan.

Afterlife and spiritual journey – Similar to butterflies, moths are creatures believed to have special connection o the world of the Unknown, spiritual universe, afterlife and things that are abstract and mystical. Many people believe butterflies represent human souls and the interpretation of moths’ symbolism is the same.

It is sometimes thought they are souls of deceased people, trying to send the message to the world of the living.

Moths’ wings are delicate and silky. Their silent movement represents the celestial tranquility and harmony. While many people consider them heralds of death and darkness, others think of them as creatures of pure light.

Their attraction to flames could also be interpreted as a search for the ‘light at the end of the tunnel’, prosperity, fortune and positive vibrations celestial forces send to us.

Transformation and development – Moths go through same stages as butterflies, from larvae to caterpillar and then to a moth. This natural physical transformation is commonly identified with humans’ personal growth and development. Moths’ stages of growth are compared to stages of a person’s life.

We have to go through different phases in order to grow as personalities. Not all those stages are progressive, just as moths stay in a form of caterpillar for some time.

This transformation symbolism of moths is there to remind us life is not a straight line.

It has its ups and downs, pauses and active periods. Moths and butterflies are perhaps the strongest symbolical animals in that sense.

Moths are truly inspiring totem animals. People born under this totem share some characteristics with Butterfly people, only they are more mysterious.

Moth people are great characters others admire and find interesting. They have extremely delicate senses and powerful intuition. You could find clairvoyant individuals amongst them.

Moth people have unbelievably powerful intuition to the point some of them are true psychic.

They are able to dive deep into the world of spiritual energies and discover a lot about themselves and the world around us, from the Other side.

Sometimes, they are even able to predict things. Those individuals can see through people and there is no way they could be deceived or manipulated. However, their emotions are delicate and they are affectionate.
Emotional and fragile

Moth people express great emotional capacity. They are compassionate and passionate, which could really make them vulnerable.

They have empathy for all living beings; they are amazingly devoted to their loved ones, but also love to help people in need.

Moth people are great at jobs in fields of social work and support, medical care, psychology, teaching and similar.

Since they have so delicate senses and are aware of their spiritual self, they also have great capacity and the will to learn.

Moth people are interested in many subjects, especially social sciences.

Moth people are not selfish and greedy; they enjoy helping others. Their weak link is the fact they are far more sensible than others are, so mean people might use their will to help for their own good, on behalf of a Moth person or someone supported by him or her.

Moth people are very kind, gentle and subtle. They do not like to force things up or grab things for themselves. They believe there are moments when you should be patient and moments of good opportunities.

If you are unable to wait and be still, you will never have the opportunity to see what is in front of you.

Moth people value the beauty of simple things in life. They are satisfied with modest family life, which allows them enjoying their thing in peace and harmony.

These individuals could be introverted. They do not like to stand out at all and usually keep to things they feel most comfortable with.

It is important only not to build yourself within the walls of your thoughts and let others in, occasionally, at least.

This Moth people characteristic appears unusual, mysterious and intriguing to others, so they might attract more attention they would love to.

Generally, Moth people are optimistic. They are always able to see good in people and the bright side of the current situation or phase of life.

They know life is not always milk and honey, but they would not let this revelation bring them down.