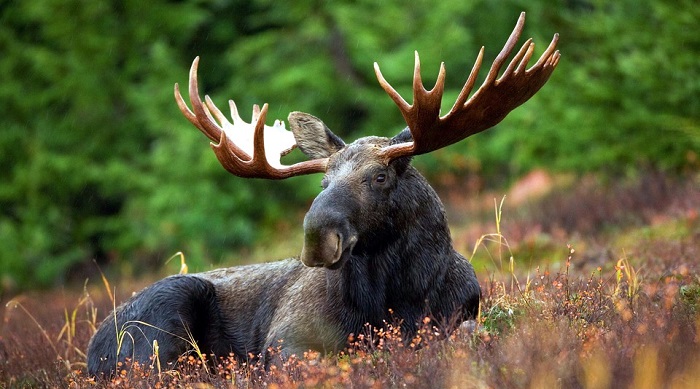 Moose is the largest member of deer-like animals family. This gigantic horned creature inhabits northern parts of America and Canada.

Its cousin, elk, lives throughout Eurasia. Moose are distinctive for their massive bodies, long, strong legs, big noses and impressive flat antlers in males. These animals are well adapted to cold climate and they mostly live in Alaska, New England, Canada, some parts of Scandinavia, around Baltic Sea and in Russia.

Moose are an exception in deer family, mainly because these animals live solitary, unlike other species living in herds.

Moose are big, intimidating, but generally of a calm nature and slow, relaxed pace. However, if threatened or irritated, they could become really aggressive and dangerous. You do not want to be attacked by a moose!

Population of these animals gradually declines; they are hunt down and injured by predators such as wolves and they are subjective of bacterial infections.

Their population is still stable in colder areas of the planet. Moose are ancient compared to many other species, so their symbolism is heavily built and strong.

Native American folklore features myths and legend about this amazing animal. One of the known ones is the story about The Moose Woman, by Seneca Indians. In Eurasia, there are stories about elks; such are numerous tales about Silver elk, originating from Urals area.

Moose are often seen magical and highly spiritual beings and great symbolical energy is ascribed to them, in all parts of the world they live in.

Moose are quite of unique appearance. They are native to subarctic areas and there are several subspecies living in different parts of the world, such as Eurasian elk, Mid-Siberian moose, Eastern moose, Alaska moose and so on.

Since these animals are widely spread in North America, most of beliefs about moose originate from these lands. Moose have special meaning to Native American tribes and their symbolism is ancient and strong.

Generally speaking, moose are tranquil animals and they are not considered dangerous to humans. It is not so unusual to have an encounter with a moose on long and cold northern highways. Moose could appear intimidating, but it would rather just cross your path than attack you. 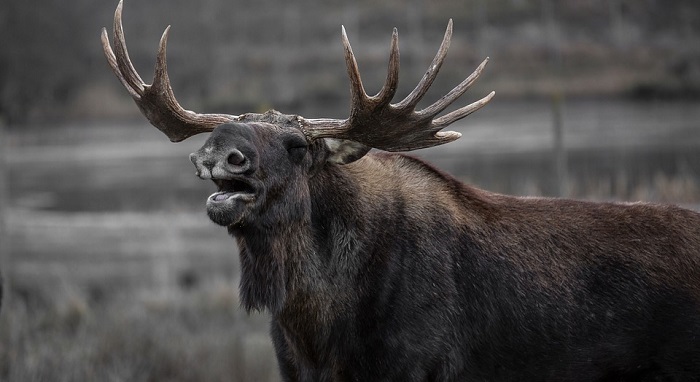 These big deer-like creatures live around human populated areas. Although they are not aggressive by their nature, moose could get quite defensive when it comes to protecting their young ones.

Moose are large animals. Males could grow up to six feet tall! They are massive and heavy and their antlers look impressive. Therefore, they do not have many natural enemies.

Wolves and bears are worth of mentioning, however. Moose spend most of their time in search for food; they are herbivores, so they seek rich grassy plains for the purpose.

These big animals are excellent swimmers, which allows them to travel far places to find the perfect place with drinking water and food.

Moose symbolism is particularly strong amongst Native American traditions. They are appreciated and admired, being one of the first totem and power animals in these areas. These animals express amazing traits that make them powerful spirit animals. Let us see what they represent in symbolical sense.

Moose also symbolize high self-esteem and confidence. They are not easily frightened by other living beings. During mating season, males fight to get more females for themselves. Their impressive antlers serve the purpose and the sight of fighting moose is something quite scary and amazing, at the same time.

Males express their domination simply by their appearance. Usually the weaker or smaller one realizes he would lose the fight, so he retreats, leaving females to the stronger one.

However, sometimes both male moose are big and very strong and then the fight occurs, with the same purpose. These animals are admired for their strong masculinity and the sense of dominance; they are identified with these concepts and they represent a powerful masculine spirit animal.

Strength and feminine power – We have mentioned moose are naturally calm, but they would evaluate the strength of one another or fight over females, during the mating season. This is a natural ‘play’ of dominance, which makes these creatures powerful symbols of masculinity and power.

Apart from that, all moose are strong, not only males. Mothers are firmly connected with their calves and would do anything to protect them. They represent feminine power and motherly strength, concepts worth of a great value for humans.

Moose are not easily frightened by other living beings and they are well aware of their grandiose bodies and impressive physical strength. People identify them with ideas of strength and power, so moose totem is highly valued in Native American tradition, for example. Females are admired for their unshakable motherly love.

Courage and defense – Moose are strong and intimidating animals, but there are few dangerous and vicious predators that would attack them. Bears could represent a real threat to a moose, no matter how big it is. If a moose is weak, old or injured, the chances for an attack by a bear or wolf are much bigger.

However, moose usually stand their ground and defend themselves and especially their young ones. Protection of calves is of a vital importance to moose.

They would stand up against much stronger or more dangerous enemy, such as big bear in a full physical health, if it comes to defending their little ones. Sometimes, a moose know it will lose the fight. However, these animals are devoted to what they consider their own and they would fight for it until the end.

These moose traits are admired and praised by humans, so moose stand for mighty symbols of courage, protection and devotion.

Endurance and adaptability – Moose are naturally predisposed to endure harsh climate conditions in cold areas they inhabit. They are extremely adaptable and enduring species. Moose are able to spend long periods without any food or water resources, because they have to search for it across unwelcoming environment, where these resources are few.

These animals would go for miles and miles in order to find proper conditions to feed themselves and nurture their young ones.

Moose are adaptable to harsh winters typical for northern hemisphere. Their bodies can endure extreme freezing temperatures and make them survive long cold seasons. Their large bodies are agile, although they might appear clumsy.

On the contrary, they jump very well, successfully avoiding obstacles on their way. They are excellent swimmers, as well. All of these characteristics make them impressive spirit animals. They represent endurance, agility and adaptability.

Self-reliance and motherly love – Moose are generally solitary beings and they are rarely seen in large groups. They could be seen together when traveling great distances in search for a better place to stay or during the mating season. However, they do not live in herds or groups.

On the other hand, while individual adult moose are generally seen alone, the bond between a female and her cubs is simply breathtaking. Moose cows are passionate and devoted mother, who would do anything to defend its cubs and provide proper shelter and food for them.

This is one of the strongest mother-children bonds seen in animal kingdom. Therefore, moose symbolize those bonds and incredible motherly love.

Grace and tenderness – Moose may not appear graceful or elegant because of their long legs and disproportionately large bodies with a hump and big head, but once you see their walk, you will certainly change your mind.

They move slow and steady, resembling horses’ walk. They are calm and serene and they do not jump or run around unnecessarily. Their proud posture and graceful walk make moose appear royal. Moose symbolize pride, serenity and royalty. They are appreciated for their calm behavior and peaceful nature.

Moose as totem and spirit animal

Moose is an amazing spirit animal and it is deeply admired in Native American tradition. Moose totem possesses great characteristics and traits desired by many people.

People whose spirit animal is this lovely deer-like animal are usually balanced and peaceful. They do not make mistakes easily, because they never rush. They are simple, in a good way, and humble.

If you carefully listen to your Moose spirit guide, you will certainly benefit from amazing gift your totem has to offer. Moose people are generally:

Moose people are quiet, calm and graceful. They always have a positive mind and think good about others. They are not naïve or easily deceived, they naturally attract positive energy, so they rarely get in trouble or engaged with some shady business or shady characters.

These people are not spoiled and they are not demanding. They are able to stand for themselves and defend what they consider their own. They do this in a tranquil and reasoned manner.

These individuals are confident and aware of their strong personality. Moose totem teaches them to use these qualities in a good way.

Moose people would never hurt somebody without proper cause; they would only defend themselves, if needed. They could be dominant and inspire admiration and great respect from people around.

Moose people are not aggressive and bad tempered. They could be passionate lovers and great, loyal friends. They are warm and have a lot of empathy and understanding for others. They are usually good parents and especially caring mothers.

Women should be cautious when listening to their Moose totem guidelines, because they could get overprotective and restrain their children desires.

If you are a woman and your spirit animal is female moose, try to learn all the lessons from her, with a reasoned mind and everything should be good for you and your loved ones. Moose people could also appear:

People guided by a moose are unique and solitary in their hearts, but they are pretty sociable. They sometimes tend to retreat to their safe corner and spend time turning to themselves and their thoughts and desires. This could be good, as well.

It could help you discover your true and spiritual self, just stay in touch with reality and people around. Sometimes, Moose people are introverted and completely turned to themselves. Moose people are gentle and polite towards other people and they pay a lot attention to their manners, which is considered a great quality.

Because they like to spend time on their own and expand their knowledge, they develop their skills and always build up their personality. They tend to know many things and to dedicate special attention studying them.

Moose is associated with elderly wisdom and this totem teaches its pupils to gather knowledge and use it. Moose people are intellectual and wise. Sometimes, this trait could make them too serious for their age.