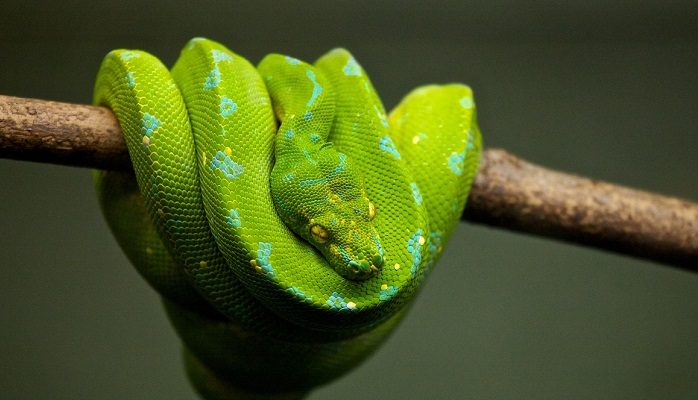 Snake is an extremely complex and universal symbol.

Often, snakes and dragons are interchangeable, and in the Far East, no distinction is made between them.

The symbolism of the serpent is polyvalent: it may have been male, female or self-emergent.

As an animal that kills, it is death and destruction; as one who periodically renews his skin, she is life and resurrection; rolled up, it is equated with the cycles of manifestation.

She accompanies all the female deities and the Great Mother, and is often portrayed wrapping around her or holding her in her hands.

Here she also has the feminine characteristics of the mysterious, enigmatic and intuitive; it is the unpredictable that shows itself and suddenly disappears again.

The serpent, too, was considered to be two-sexed, is the attribute of all self-creating gods and represents the creative power of the earth. It is solar, chthonic, its symbolism is used at funerals, and it is the manifestation of power in every respect and is closely related to the ideas of life and death.

Because she lives underground, she has connection with the underworld and access to the powers of omniscience and magic of the dead.

The chthonic serpent manifests the aggressive powers of the gods of the underworld and of darkness; in all cultures it is an initiator and rejuvenator and “master of the earth’s interior”.

In its chthonic meaning, it is the enemy of the sun and of all the solar and spiritual powers and stands for the dark forces of humanity. Here are the positive and the negative, light and darkness in conflict with each other, such. Zeus and Typhon, Apollo and Python, Osiris and Seth, eagles and snakes, etc. 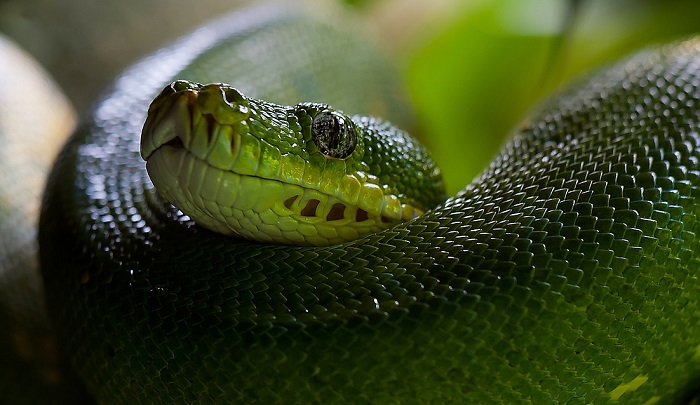 It is a mediator between heaven and earth, earth and underworld, and is associated with heaven, earth, and water, and especially with the Cosmic Tree. She is also the cloud dragon of darkness and guards treasures.

The serpent can represent the sun’s rays, the course of the sun, the lightning and the power of the water, and is an attribute of all river deities. She is wisdom; treachery; Craftiness; Darkness; the evil, the corruption and the tempter.

“She is the personified power of fate, agile like misfortune, wanton as retribution, incomprehensible as fate.”

Cosmologically speaking, the serpent of the Urozean, from which everything emanates and returns to everything, is the primordial, undifferentiated chaos.

It can also carry and sustain the world and circle it as Uroboros, the symbol of cyclical manifestation and reunification. It is the god found in early cosmogonies, which later gave way to a more psychological and spiritual-religious interpretation.

Snakes or dragons are the keepers of the threshold, of temples and treasures of esoteric knowledge and all the moon deities.

They are storm waters, rulers of the forces of the water, they orbit the water and capture the water, but at the same time they are water-bearers. They are invoked in all incantations of the dead who crossed the waters of death.

As the serpent moves without legs or wings, it symbolizes the all-pervading spirit; it is the inner nature of man and conscience, since it permeates crevices.

It can also be a manifestation of evil forces such as witches or wizards, representing the evil and corrupted aspect of nature. The sky serpent with the Chinese azure dragon symbolizes the rainbow, and both can build a bridge from this world to the other.

A child playing with a snake represents the recovered paradise, the absence of conflict and the end of the temporal world; it has the same symbolism as the animals Lion and Lamb.

A royal emblem; a vehicle of immortality; Incarnations of the dead. The sky snake is u. a. the rainbow and surrounds the earth or is a guardian of treasures or a thunder world and connected to lightning. As a rainbow, she quenches her thirst in the sea.

The serpent may be a cultural hero or a mythical ancestor who gave the people the blacksmith’s fire and the grain. It is connected with the waters and the creativeness. There is also the cult of St. Python.

Uraeus, the cobra, is a symbol of supreme divine and royal wisdom and power; Knowledge; Gold. Apophis, the adversary as Seth in his typhonic aspect, is the serpent of the nebula, “the demon of darkness,” discord and destruction; also the evil aspect of the scorching sun.

Serpents on the side of the solar disc stand for the goddesses, who drove out the enemies of the sun god Re as king serpents.

Two snakes are Nus and logos. The snake with the lion’s head is protection against the evil. Buto, a serpent goddess, takes the form of a cobra.

Seeing snakes in dreams is a common occurrence in many people. They are considered to be one of the oldest known symbols and we can find many examples of snake artwork in statues, paintings and other man-made artifacts.

. For the most part, their symbolism was seen as negative and in most cases the same applies to the dream world.

Dreaming snakes can have various symbolical meanings. Most of them are negative but there are some instances in which the snakes are seen as a good sign in the dream.

Dreaming of a big snake – Seeing a large snake in your dream is an indication that you have to be careful and watch out for the warning signs around you. It might be that you have developed bad relationships with other people which are causing you to be completely disoriented.

This dream also reminds you to use your power of evaluation to determine which people are good for you and which are not.

Dreaming of a small snake – This dream is a symbol of expenses that are going to set you off track for a while.

These expenses will be related to your good nature and tendency to trust people too much, so be careful of those individuals. Keep your money close to you and don’t let others use for their own selfish reasons. It is always better to help those who are in true need.

Dead snake in dream – Dreams about dead snake are, rarely, positive dreams. When you have this dream you can be sure that all of your business deals and ventures will be successful. This dream also brings positive vibes into your personal life because it will bring you and your partner closer than even.

Several snakes in a dream – This terrifying dream is something that we all agree is an unpleasant dream to have. When it happens that you have this dream, you can expect a major inconvenience to happen to you. This is going to be an event closely related to your work or personal relationship in which you won’t show your best side.

Killing a snake in dream – Killing a snake in your dream is the same as defeating your enemy in real life- is someone was bothering you in any way, then you can expect that you will be victorious against someone who has been on your back the entire time.

Dream of a red snake – Seeing a red snake means you will have someone close to you die or get really sick.

Dreaming of a black snake – This dream means someone in your family will die or get really sick.

Seeing a snake in your home – This dream is telling you that someone from your close surroundings is not the way he seems. Be careful because this person could potentially harm you since they are envious about you.