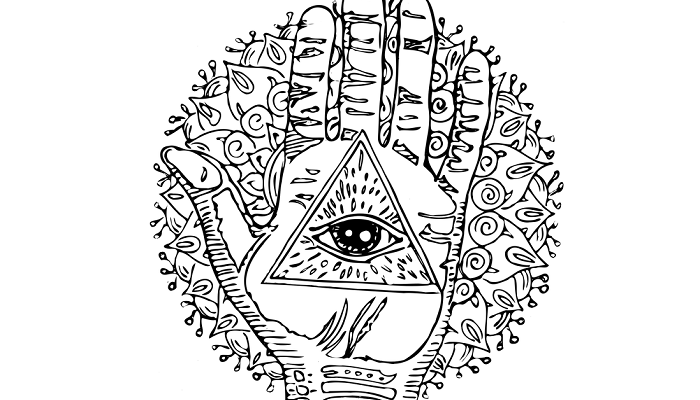 We will start this piece by speaking some more about the central symbol here – the Hand! It is one potent symbol; it talks and leaves a sign that we are present.

It is the symbol of creation because with our hands we can make things and be creative with our lives, but also to live and survive.

Now, in this case, Hamsa Hand is a symbol that is even more special, and though many cultures, civilizations and religions, it is the indisputable symbol of energy, power and endurance.

This is the aged symbol, and in this sense, this secret Hand with open palm is connected to the power that manages both worlds – the Earth and the Heavens.

Even today, for many religions – from Hindu to Judaism, Hamsa Hand succeeded in retaining the title of the most cherished representation of happiness in almost all cultures.

In it, we see not only the happy circumstances that lead us to some success but also durability to endure hard times and evil intentions.

What does Hamsa Hand mean?

We use Hands in the everyday communication process, in speech also, for the expression of a variety of emotions, and there are a lot of ways that confirm this – to be hands-on, to greet somebody, to shake someone’s Hand, to take justice in our own hands, to have hands of gold, to have happy hands, to give a hand to someone, to wash hands from something bad(not in a literal way), to hold someone else hand in your hand, to raise your hands from something, first Hand, go Hand in Hand, etc.

There are some data that speaks and shows models of opened hands; they were found in many countries around the world. Most often they are used as ornaments; the figures of a hand are attached to crowns, or weapons, always with the idea of transferring power to those who hold the crown and use the weapon.

The images of the Hand with the bent thumb, signify a blessing, but the folded fist with two fingers straight represent the horns of the devil – this model remains till this day.

There is one exciting detail – Hamsa Hand was a symbol that was known in ancient Babylon, where it signified the highest authority that controls both the Earth and the Heavens. It is believed to have originated initially from Mesopotamia, and it has spread to Middle Eastern and Mediterranean countries later on. 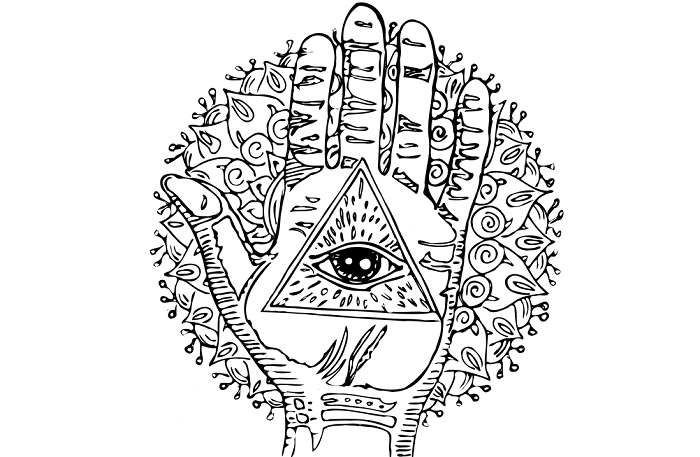 Hamsa Hand also appears in Buddhism and Hinduism, where it is connected with chakras (or energy fields as we in western civilizations like to call it) and with five elements in the world.

Also, the Hamsa Hand is connected to the female principle, and it is associated with the protection from the Goddesses.

As an ancient Middle Eastern amulet, it can be translated to the God’s Hand, and what it means is that it is the object that gives us the protection from the above, from the Highest source.

This is the Great shelter that provides us with the protection from all evil, and it brings us with the incredible happiness that is beyond anything that we could imagine, overall well-being, the health of a body and mind, reconciliation with things that we cannot change, wisdom to accept and forgive, harmony, and successfulness in all aspects of life.

It is no wonder why so many believe in Hamsa Hand and carry it wherever they go.

What does Hamsa Hand symbolize?

In all nations and at all periods, the Hand was a symbol of strength and power, and it is believed that God himself is represented through the image of Hand.

In one old Egyptian book, the Hand denotes the highest power that manages both heaven and Earth (and at the beginning of this piece, we spoke about how this correlation stayed till this day).

On designs that decorate this text, we see the Great Hand holding firmly the chain linking the four Sons of God, holding the snakes of the underground. Here we can see the two worlds collide – the world the God of evil and the eternal enemy of Ra, the God of the Sun.

In medieval arts, the Supreme God (the Higher Power, Ultimate Force) is depicted by a hand that is emerging from the sky. Sometimes the Hand is open, and the rays of light appear through the fingers, but it is more often seen in the act of blessing, that is, with two raised fingers.

In the Bible, raising a hand toward God was considered act of God worship.

In some cultures, some magic prayers in translation suggest – Raising the Hand.

In Western Asia, the act of raising a hand was viewed as a representation of the invocation of the divinity, the gift of prayer or mercy.

Hamsa hand can be presented in two ways: in the form of a real hand or, more often, as a stylized hand with two symmetrical thumbs. Also, the fingers of the Hamsa hand can be directed up or down. They are most commonly placed in houses, but they are also worn as pendants on chains and bracelets.

Nowadays, many people choose this symbol as a tattoo – in this way; Hamsa Hand can give us protection wherever we are, without any fear that we could lose it.

The Hamsa as a word means number five. The number five has a symbolic meaning in the Jewish tradition – it presents five books of Torah, but also the fifth letter of the Hebrew character which describes one of God’s holy names.

Five fingers are also related to the five basic senses to celebrate God.

Hand and Man are connected in so many ways, and the five fingers of Hamsa Hand represent five elements of nature and five energy centers (chakras) of each human body. A thumb signifies fire and solar plexus chakra; index finger is an air element and heart chakra; the middle finger corresponds with the aspect of the spirit and neck; the finger is the element of the Earth and in relation to the root of the chakra; while a small finger is a picture of a water element and a sacral chakra.

Often, Hatma Hand has various symbols written on it (in some cultures it is the name of a person who believes in Hamsa Hand and carries this symbol) in the hope that his fate will be under permanent divine protection.

Some say that when a Hamsa Hand is raised, then it signifies a greeting to destiny in its good aspects, while at the same time causing harmful elements of destiny. At all times, the Hamsa hand represented a particular part of the human body. With her help, it is possible to express compassion, care for other people, feelings and aspirations up to the symbolic gestures of the Hand of God.

Does it bring bad or good luck?

As you can see, even in modern time, Hamsa Hand managed to retain the name of the most cherished symbol of happiness in almost all cultures all over the world.

So there is no doubt that it is a symbol that brings good luck – we see the happy circumstances that lead us to some success, but it is the symbol of protection from evil and durability to sustained negativity.

It is the divine Hand that is often carried in the form of jewelry so that it is always close to help in the most dangerous situations!

Apart from using it as a shield of negative energy and evil, it has the power to bring peace, pleasure, joy and satisfaction into our lives, and equally useful for preserving health and increasing fertility.

Whatever we may want in life or whatever we may fear in life, Hamsa Hand is the symbol that promises that we get it, and even better, it has the power not just to give us, but to protect us from all harm.

It is said that from Hamsa Hand when we look deeply into it, we could see our destiny along with his real desires, especially those that we are desperate to try.

Different lines express the distinct character and future of a human since Hand is also seen as a symbol of a man (each finger for a head, and four limbs).

As we have said, in the beginning, the motive of a Hand holds great importance for people – from children’s games to the act of holding hands.

Hands are those who leave a trace in everything – they wave, pray, defend, caress, threaten, play, they touch and write. The Hand follows all our moods and emotions, indicates love, care, fear, passion, peace, restlessness, excitement, impatience, a lie.

Hamsa Hand is a sophisticated symbol that can show compassion, concern for other people, compassion and humanity above all. It is an excellent guide for all those who have been devoted to getting caught up in a big problem, that is, for people who are at a crossroads.

It is said that this symbol that is present in our world since ancient Babylon, would bring us happiness beyond compare, it will offer the right solution, and bring happy events that will help us to deal with all kinds of problems.

Even better and more critical in modern-day, Hamsa Hand can be our true protector from all pain, negativity and miserable events in life.