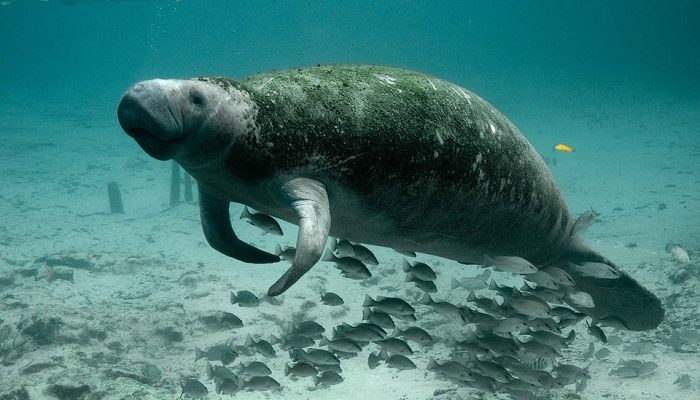 Manatees are large water mammals commonly referred to as ‘sea cows’. Manatees spend all of their lives in water; they inhabit marshlands and shallow water areas of the Caribbean coastline, the Gulf of Mexico and Amazonian marshes, while one of the species could be found close to West Africa.

Today, there are three living species of manatee, which belong to the Sirenia order. Interestingly, none of them resembles beautiful and dangerous sirens from sailors’ stories and fairytales.

They have more in common with cows, indeed. We do not say that in a negative or taunting way.

It is the most likely that manatee name comes from Taino people word manati, which means ‘udder’ or ‘breast’;
Manatee name is a bit confusing.

There is no concrete conclusion about the exact origin of the word ‘manatee’.

According to some etymologists, the word comes from Latin term manus, meaning ‘hand’, while others claim it originates from an old Caribbean word manati, meaning ‘breast’. Most of people across the world simply call these docile calm marine creatures sea cows.

People call these animals sea cows because of their body shape, docile, calm and herbivorous nature;
You might think manatees are slow. However, they could reach the speed of about twenty-four kilometers per hour.

To get the better picture, average jogging speed is about eight kilometers per hour, while humans’ maximum is up to forty-five. You see, they are not as slow as you might think, but they prefer calm and relaxed pace.

Manatees appear docile and indifferent, but these animals are intelligent. Their learning capacity is similar to that of dolphins;

Manatees’ greatest enemies are humans and their vessels. Humans destroy manatees’ natural habitat and hurt them with their boats and ships, unintentionally.

An interesting but not so fortunate fact about these big animals is that they are able to hear high frequencies, which is uncommon for such a large water animals. 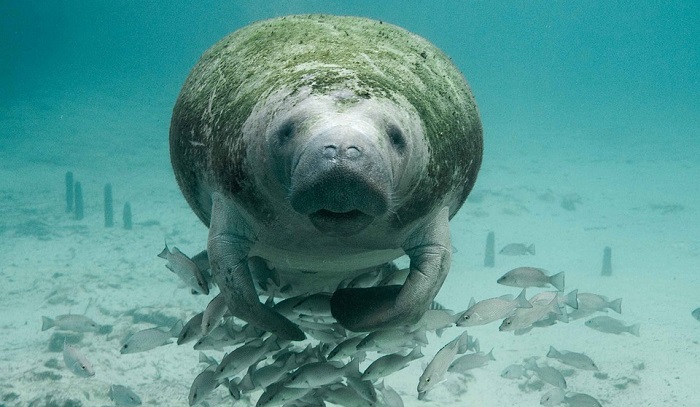 Now that we know something more about these gentle giants, let us discover something about their symbolism. What spiritual powers they possess and how those could be reflected in our world? Manatees are good spirited giants of benevolent and gentle nature.

They are calm and intelligent creatures, with many positive symbolic meanings.

Benevolence and kindness – Manatees are true gentle giants. They are herbivores, so they do not represent a threat to humans. In addition, their behavior is calm and benevolent and they are not timid creatures. You could swim and dive along with them without worrying if a manatee would attack you.

People are able to understand their behavior because they let us get close.

Manatees’ size might frighten you at first, but then you realize these animals are completely harmless. They represent benevolence, calmness, easy-going attitude, happiness and harmony.

Their quiet and relaxed nature surely proves their strong symbolism in that sense.

Intelligence and understanding – Manatees are intelligent animals and they have a great sense of social interaction and community, very similar to that of dolphins. They are great learners and very communicative creatures.

Manatees have a good understanding of discrimination, for example. These large mammals are great representatives of the smartest animals on Earth.

They represent understanding, learning and intelligence.

Sacred and healing – In some African societies, manatees are considered sacred animals and they were protected by tribal rules and regulations. It is believed manatees were humans once. Therefore, hurting or killing a manatee is certainly a bad and misfortunate thing to do.

Some tribes would severely punish such an act. In America, manatees were believed to possess healing powers.

Tribal healers would collect and use their bones to make cures for different sorts of diseases and discomforts.

Manatee totem people are good hearted, gentle and compassionate individuals who value all the beauties of this life and respect other people.

They naturally see the best in others and that positive attitude brings them a lot of love and luck in life. Manatee people are humble and noble; they are good listeners, supportive friends and caring parents.

They have good intuition and deal great in social situations.

Manatee people are assertive. They do tend to see good in everything, but are not naïve. They stand behind their words and are capable of defending their ideas and causes.

Manatee people would never hurt others or destroy their plans in order to reach their goals.

They always try to reason others and never act aggressively or passive-aggressively.

If they see they are wrong, manatee people are capable of admitting it. They are confident, but not arrogant.

These personalities are some of the most lovable and adorable people you could have around. They are very emotional and not afraid to show their feelings. If they love you, you will know that.

Manatee people care about others and are protective.

They rarely seek help from others, but do not hesitate to ask for it, if circumstances demand so.

Good advice and support is something you can always get from a Manatee person. These people are born to work in some social work organization or something similar.

They have a lot of love and understanding for others. However, they would never let anyone manipulate them or exploit their good will.

Manatee people see through others’ intentions and are capable of distinguishing a true need for help from exploitation.

They would listen to you with an open heart.

Manatee people are sociable, but they do not have many friends. They do not need a large company, but are strongly attached to few very good friends.

They nurture their social relations, care for their families and all of their loved ones.

Manatee people are tolerant and understand what people need.

If you are a manatee person, you sure have an optimistic attitude towards life. Manatee people always see the bright side of life and strive for success.

They are steady in all of their plans and actions, which help them build up their destiny in a slow and gradual manner.

They generally have good idea of what they want in life, but are not greedy or overly ambitious.

These people are determined and they love plans. Their organizational skills are great, but their plans could be flexible.

They would generally stick to their goals, but change steps along the way. This is a talent to be proud of!

Manatee people are those we should all look upon to, at least in some aspects of life.