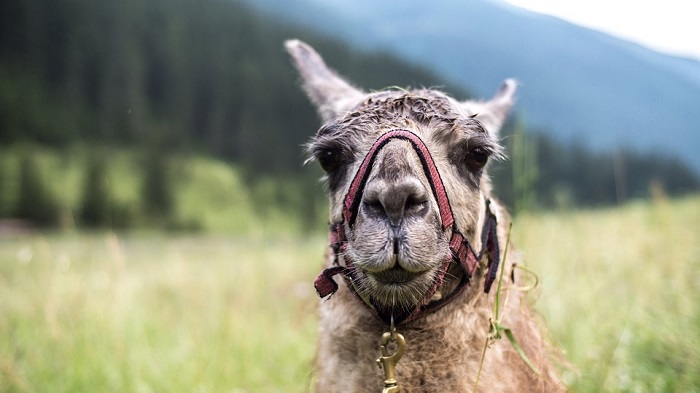 Llamas are members of Camelidae family, animals of significant importance for Andean cultures.

These intelligent animals had been domesticated a long time ago and they have been used as a source of food and fur and as pack animals ages ago. Llamas are sociable and loving animals that live in large herds.

There are several species, of which two exist only in domesticated environment, while the other two are to be found in the wild.

We usually speak of llamas in general, but this group includes vicuna, guanaco, alpaca llama and domestic lama;

These animals are relatives to camels, although some of people who made first records on them thought of llamas as sheep.

While today we typically associate llamas with Incas, Andean Mountains and Peru, they originally come from North America plains, where they have lived nearly three millenniums ago.

According to archaeological evidence, llamas existed in central parts of North America about forty millennia ago.

Did you know that llamas actually originate from North America?

They were extinct approximately ten thousand of years ago, at the end of the Ice Age;

There are many interesting facts about llamas that would help us to better understand what they mean to people.

While llamas are primarily considered useful and practical animals for people living in harsh environment of Andean plateaus, as well as for Spaniards who invaded the lands centuries ago, these tricky tempered animals possess amazing spiritual traits and totem powers. Let us find out what is so extraordinary about them.

Amazing facts about llamas and their symbolism 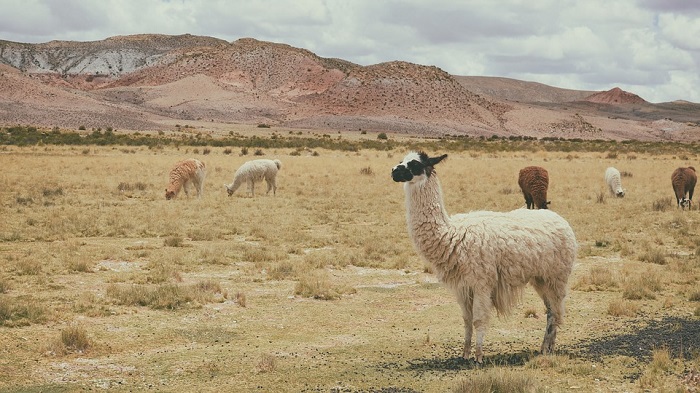 Llamas are amazing animals. They are very tough and able to endure all kinds of difficulties, especially those of environmental nature; although llamas live in warm parts of the globe, high mountains and areas they inhabit have harsh climate.

Llamas adapted to these severe living conditions and became strong and resistant.

Their charming appearance makes them look not bothered by anything in this world, at all!

These animals posses truly intriguing nature, so no wonder people are fascinated by them all around the world.

An old story says llamas name comes from a simple misunderstanding between Incas and Spaniards. Spaniards kept asking what was the name of the animal they have seen for the first time, repeating the question: “Como se llama?”;

According to this story, Incas thought ‘llama’ was a Spanish name for the animal and so we today also know them as llamas.

However, researchers claim this romantic tale is not true, because the name ‘llama’ existed in the area long time before Europeans came.

Historical evidence confirms the term is of Quechan origin, just as many other words Europeans borrowed for numerous animals, plants or objects coming from Americas.

Llamas have a clear way to say they are overloaded. They simply refuse to move and carry the load you have packed up on their back;

Llamas are incredibly strong animals, although they look gentle. They are able to carry the load of more than thirty kilograms for up to twenty miles or so.

However, if people put more than that or any amount the llama evaluates as too much, the animal simply refuses to move.

Not only it would refuse, but it could also get aggressive towards the owner. Once you lessen the load, llama agrees to cooperate.

Llamas are known for spitting around and sticking the tongue out, in order to express their dissatisfaction, just as a rude person would do;

Yes, some llama owners claim these animals are through in expressing their discontent. For example, if they are not pleased by what you do (or another llama), they would climb their tongue or spit on you.

Llamas re considered useful and valuable animals, despite of their moody character. Nevertheless, what are their spiritual traits?

They do have many.

These animals are strong, persistent, hardworking and proud fellows. In addition to their material, practical ‘purpose’, they have an amazing spiritual energy, which has maybe helped Andean cultures survive all those years in such a harsh environment.

Pride and confidence – llamas are believed to be proud creatures. Well, they appear self-confident and, although they are domesticated, llamas will not let you treat them like cattle. They could be stubborn and rebellious, if you push them too hard.

However, they could also be very helpful, friendly and supportive. Llamas symbolize great confidence and self-awareness.

Persistence and survival – Llamas are known for their endurance, strength and persistence. We have mentioned how strong they are. They are also well aware of their capabilities, which certainly an extraordinary trait. We should learn from llamas and try to evaluate our own strengths and advantages, in order not to waste our energy.

These four-legged fellows are survivors and it seems they easily get along with all the challenges Mother Nature puts on their way.

They are able to survive in extreme conditions. Llamas represent perseverance, longevity and survival.

Spiritual protection – While llamas are not spiritual creatures like some others, meaning they are not primarily worshiped for mysterious forces believed to posses, but rather for their real-life help and support, Native Americans appreciated them enormously. They have used parts of llama bodies as powerful amulets, especially for burying ceremonies and rituals.

Inca people were incredibly dependant on help of these amazing, persistent animals. They worshiped them and would always make sure to somehow secure their support.

Many Inca nobility members were buried with llamas’ body parts.

This was the way to express honor to the dead, but also to provide them appropriate afterlife protection.

Llama people are confident, focused and tough individuals who would never let others manipulate or underestimate their abilities. They are direct, talkative and persistent in their intentions.

These are charismatic people who easily inspire others.

However, they are sometimes stubborn or intrusive. Llama people do not give up their cause easily and never let others bring them down.

Llama people generally know what they want in life and would do all that it takes to achieve.

Their desires might vary a lot; while some llama people want great career and financial success, others are focused on marriage and family, but each one of them is determined and ready to face all the challenges with optimism and confidence.

Llama people are well aware of their own capabilities and opportunities.

If they think some of their skills are not good enough or they do not have enough knowledge of something they are interested into, llama people simply decide to improve those.

They are hardworking, devoted and never easily distracted by outer factors. They know they are able to achieve a lot.

They represent an amazing company and are always interesting to talk to. They are adventurous and have a lot of experience to share.

To their friends and family, Llama people are kind and loving.

Llama people value themselves very much, but they are also caring and protective towards their dear ones; they would never let them get harmed.

The only flaw of Llama people is hidden within their incredible charisma and proud spirit. They are sometimes intrusive and could become unbearably stubborn.

While it is good for you to stand your ground and not easily give up your goals, try to understand how your actions or words affect other people.

Llama people are strong-willed characters with great odds to succeed in all areas of their life.