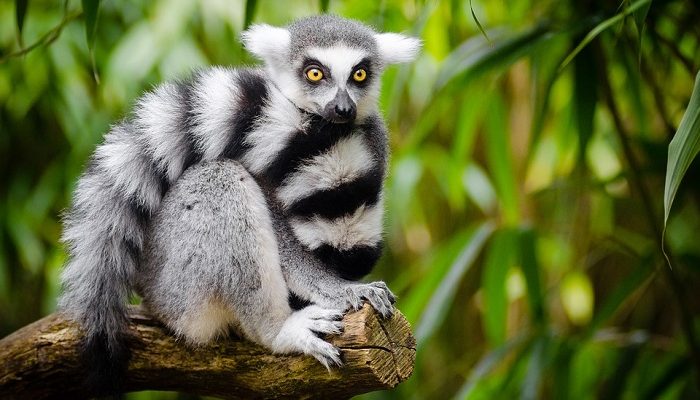 Speaking of lemurs, many of you most certainly cannot help yourselves not to think about Julian, the party maniac ‘jungle king’ from Disney’s ‘Madagascar’ movie.

If you do not know anything about him, Julian is a funny lemur character who makes spectacular parties for his subjects and friends, trying to chase away the fear of fossa, cat-like predators that hunt and eat little mammals like lemurs.

In the following text, we will see if lemurs indeed have traits similar to Julian!

Before we move on to lemur symbolism and spiritual powers of this fascinating creature, we must share with you interesting information about these cuties.

Lemurs are specific members of monkeys’ family, exclusively inhabiting the island of Madagascar. Lemurs have been living there since far past and that is the only place they could be seen in wild.

Today, their existence is threatened by several factors, so organizations for animal rights and preservation of endangered species strive to protect these colorful little fellows.

About forty millions of years ago, first lemurs have somehow travelled from their birth place in Africa to the island of Madagascar, where they have been living exclusively since that time;

At first, there was about forty different species of lemurs, but some of them are extinct.

Research evidence suggest about fourteen larger species had disappeared shortly after inhabiting the island and that this was humans fault;

People have been hunting these small and colorful monkeys as an important source of food. Even today, some of these lovely creatures end up in a soup!

During the twentieth century, human population on Madagascar had risen in numbers, so living space of lemurs had became endangered. 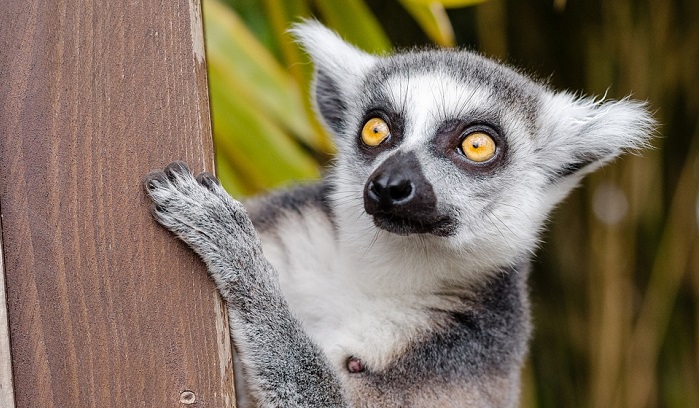 The result is loss of big rainforests lemurs consider their home. In addition to human threat, there are some predators feeding on these monkey’ meat, as well.

Some of the most widely known lemur species are ring tailed lemur (Julian is exactly that one), little big-eyed ay-ay, Verreaux’s sifaka and the smallest one, grey mouse lemur;

Did you know that lemurs are known as forests’ ghosts?

Well, it is not so hard to imagine, since they are fast, small, with remarkably big eyes and impressive coat patterns!

They are very active little fellows, skilful in climbing. Many of lemur species are nocturnal animals, which gives them even more ghost-like spiritual power.

These animals are primates living only in Madagascar; for a long period of time, they were known only to locals. Today, we all know about them.

For people outside Madagascar, lemurs are exotic, extraordinary and fascinating creatures. They indeed look amazing and emit some sort of positive vibrations, because of their remarkable look, very friendly behavior and constant activity;

Joy and fun – These cute little monkeys are simply adorable. They are joyful and very social. Lemurs love to play and spend time with their relatives. Their exotic appearance reminds people from other parts of the world of tropical paradise, fun and relaxing times. In nature, lemurs are indeed quite joyful creatures.

Just as Disney’s character makes flashy parties for his friends in a popular movie, lemurs do possess that kind of positive energy in nature and symbolically.

They represent fun, eagerness and joy. Lemur spirit suggest you should take the best of life has to offer, smile often and be happy as much as you can.

Activity and mystery – Lemurs are active animals, which is a natural characteristic of primates in general. They move around and jump all the time. Lemurs are unable to sit still! They move up and down the trees to find juicy leaves they feed on.

Some species are nocturnal, which makes them genuine forest spirits or ghosts. However, their ghostly presence is benevolent and positive.

Fearlessness and friendliness – Lemurs are animals sociable and friendly by nature. Even if they are aware they are small and not as strong as fossa cat-like animals that feed on their meat and are aware of humans hunting them, lemurs are not timid at all.

In fact, they would most likely allow people to approach them very close.

These colorful monkeys represent fearlessness and friendship. They are observant and watchful, but less likely to run away, which might them cost their lives. Lemurs are indeed fascinating and funny animals to see. No ways they would not put a smile on your face.

They symbolize sociability and fun.

As a totem animal, lemur is joyful and pleasant spiritual guide. If you possess some of lemur’s eagerness and positive approach to life, you are a lucky person.

Lemur totem shares with you skills of good communication and social interaction. Lemur totem people are extremely sociable individuals who feel comfortable around others.

They are smart and cunning, as well. They use their communication skills not only to impress, but also to outsmart others.

Lemur people can be manipulative. They are aware of their amazing social skills, so they do not hesitate to use them to achieve success. They could do that by honest communication, but also by their wits and trickery.

They might not be as reliable as steadier totem individuals, even if people often surround them. They are very active and impatient in a way, which might be both positive and negative.

Lemur people love exotic things and like to ‘dress to impress’. Their chic style goes well with their charisma and spokesperson character.

They are very intelligent and charming. Lemur totem people are generally kind towards others and love to make people laugh and feel relaxed.

Even if they make jokes about themselves, they rarely make fools of themselves. They are pleasant to be around and easy to talk to.

Lemur totem people love big parties and spotlight. They impress by their performance and appearance, so they do very well in entertainment industry, public relations, journalism and such.

Some of them are quite artsy and creative, especially when it comes to design of any form.

Lemur people are true extroverts and they do not like to be alone. Being left on their own might leave them sad or depressed.

That is probably their biggest flaw. If you are born under totem of lemur, you should remind yourself other people will not always be around.

Lemur people do not rely on others in order to do things, but they rather need some sort of social acknowledgment of their deeds and success.

Remember, the most important is that you are satisfied with what you are doing; there is no need for the entire world to confirm that!

Let your Lemur totem give you fuel to make the best of your life, but always be thankful for what you already have.