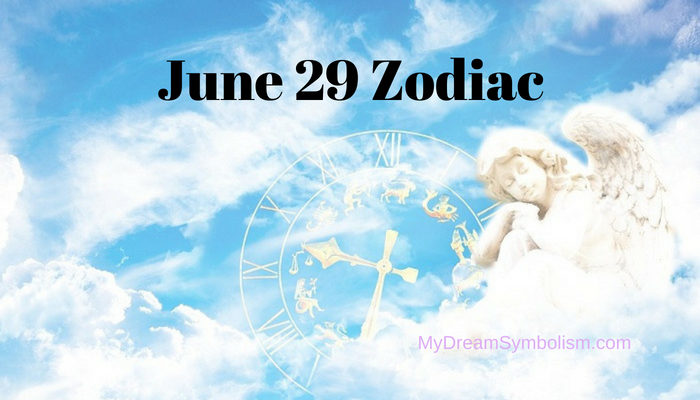 In all the old civilisations, considerable attention was paid to the Moon, and why we are mentioning this celestial body is because those who are born on June 29 are Cancers and they are under the rule of the Moon.

And the Moons influence is evident where ever you look; many festivals were dedicated to this object; the ceremonies were held for the young, bloody or the full Moon.

It was believed that when the young Moon appears in the sky, that human mind is unconsciously very open to the reception of rituals. Did you know that all the pyramids and all the old temples were built after an accurate survey of the terrain, position of the Sun and the Moon?

And for many, the Moon represents the end of one cycle, the beginning of the new, etc. In this article, we deal with this aspect, among many others where we try to reveal the true nature of the people who are born on June 29.

Those who are born on June 29 can seem to others as strange, imaginative people who prefer to live their lives as they imagined it and having opportunities, rather than living reality. These people are people of hope and are always hoping that something will come up and make life easier for them, but it will never happen, life is not straightforward. They need to learn that they have the answer, their actions, not their desires; the need to push themselves further, with many efforts invested in such a process, there is no other way.

This story goes even deeper, people born on June 29 are overwhelmed with visions and often see their life goal in realising their dreams, and they feel that they have the potential to achieve many amazing things in their lives. They can apply their fantasies at a specific time practically and can project their ambitious in the desired direction.

They are also sensitive to the wishes of others, and they are often expected to fulfill these desires, so those who are born on June 29 can be, as all Zodiac Cancers dedicated to other people, often neglecting themselves.

These people often show a childish attitude towards the world, they have high and unrealistic expectations, and when those desired ambitions are not realised they show their immaturity – these people blame others for their failures, and cannot see their mistakes and move on.

But, look at this trait from another aspect, we could say that these people are in constant contact with the values of youth, they embody innocence charm and openness, and these fantastic traits cannot be found easily in people. Despite such an outward appearance, people born this day are often dedicated to earning money, and have high goals in ambitions in life, and work – they need to find accurate measure in their lives, instead always imposing to themselves larger bite (more than they have to chew). If they go this way, they can often avoid becoming cunning and cynical, which is a real problem.

They are very sensitive and have a firm touch with which these people grab a lot of signals from the environment, and that energy can destroy them or give them the energy to move on. In interpersonal relationships, they behave cordially and openly, but it’s all just an imagined play.  Those who are born on June 29 are cautious and discerning so that can be successful in trade and money making. 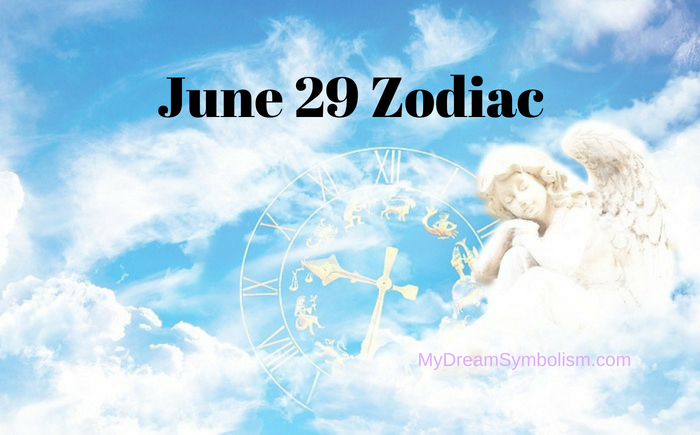 We don’t have to mention once again that these people belong to the June 29 are under the rule of the Moon and that emotionality is pronounced in everything that they do, but especially in interpersonal relations.

These people are sensitive and sensual partners, without being foolish about it; those who belong to this date are capable of reliable and lasting love, but also demand from others a lot of dedication and compromise. Because you know, love for them is not something that is easy; it’s something that requires hard work and sacrifice. Most things in love they take very seriously and are extremely persistent in their demands and efforts. Maybe someone with them had the intention of just flirting, but they will make a whole love story, and on top of this breaking, something with these people is hard.

They almost never know when it’s enough, and there can’t be anything superficial and shallow when it comes to their feelings.  They appreciate the things and people they possess and jealously keep them close to them. Their possessiveness is strange and irrepressible, but never aggressive – those who are born on June 29 will wait patiently for all the inconvenience to stop, and their lover to realise how much they are amazing and lovable. These people should never be underestimated, especially in the matters of the heart.

In the end, these are the people who are initially shy, but when they finally understand what they feel for their partners, they become brave, charming and above all silly. There are so many things in them that they will manage to keep your attention for the rest of their lives.

These people are unstoppable when they see something that they want, but they need to become ultra-realistic. These people of the June 29 think about the specific idea and are never tired of thinking about it; it becomes their obsession.

These people like travelling and they will see many interesting places in their lives, often describing their experiences in their books, or essays, letters or music. These humans are well-reasoned, but more when it comes to the affairs of others than when it comes to their own when their agenda is in question, these people can be emotional and not realistic. They are very gifted for writing so that can break into the world as writers. Occult and mysterious things are very fascinating for those who are born on June 29 and are more or less spiritual or sensible.

They are incredibly artistic, and half of their lives are spent in a parallel world, only known to them, between dreams and reality. The fascinating things happen when they let loose their nature to run freely.

These people have technical knowledge of the problems in the field they deal with, and it is a trait that can be used in their professions whatever they end up doing. The quality of their products is ultimately clear, and the ease of doing the job is so fascinating that they get the reputation of wizards who are one of a kind in their work.

Also these people can be involved, maybe as a hobby, in flying, swimming and dancing -these are frequent topics in the lives of people born on June 29. Many people born this day are vivacious and prone to the fun that can take its toll on them separating them from their work. This is the reason why their environments at workplace charge them with superficiality; and they are defending themselves, because they are aware of their actions.

Persons born on June 29 are ruled by number 2 and the Moon.

Her we encounter numerical symbolism that comes from two numbers that are present here – one is number 2. People who have this number in their life are often better collaborators and partners than leaders. This aspect only improves their ability to get along well with others. But when an individual initiative in necessary it can lead to problems and even lead these people to frustration, and since they are overly emotional it can be a problem. Another number that is present here is numeral 11, as an essential secondary number in this date and it refers to the people who are born on June 29, providing all kinds of coincidences in these people’s lives.

Planetary influence comes from the Moon that appears here in the double combination since it is also a ruler of all Cancer sign people.

In this double formation, the Moon can create misunderstanding in the segment of emotionality, and the relations of these people can have severe tension and aggravation. For the connection in the lives of these people to function more harmoniously, they must have much more understanding about different needs and desires. The Moon develops strong reflexive and passive tendencies.

Their numbers are 11 and 2, and their color is pearl white and peachy pink.

We collected different events, that occurred through the history and left an imprint on the human lives, and the one thing that they share for sure was the date when they happened is June 29.

1444 – Skanderbeg defeated the Ottoman army in battle at Torvill.

1613 – London’s “Globe” theatre burnt in a fire during the first performance of Shakespeare’s “Henry VIII”.

1807 – Russian admiral Dmitry Senyavin defeated the Ottoman fleet at the Battle of Atos.

1855 – The first issue of The Daily Telegraph has been released in London.

1864 – Samuel Ajayi Crowther became a bishop in Nigeria, the first black bishop of the Church of England.

1900 – Nobel Prize, the most prestigious world award, was established.

1913 – The Second Balkan War broke out, between Bulgaria and the alliance of Greece and Serbia, joined by Montenegro, Romania and Turkey.

1939 – The first commercial flight from the United States to Europe.

1949 – South Africa declared the apartheid policy as a state doctrine.

1976 – Seychelles have gained independence from the United Kingdom.

1995 – More than 500 people were killed in Seoul when a five-storey department collapsed.

2003 – By taking oaths Beatriz Merino, a distinguished lawyer without political experience became the first woman prime minister in the history of Peru.

If you celebrate your birthday on June 29, or you know someone who is born on this day, the next chapter will be particularly interesting for you. Do you or your friends share some similarities with famous people who are born on this date?

How can we describe people of the Moon, Cancers born on June 29 -many of their features will impress you, but a lot of them will discourage you. They are also pessimistic people, or we should say they can be like that, but this is the date of great dreamers.

All those who are connected with them in any way must understand that even in those disastrous moments when they are grossly offended because you never know what to do or say about inherent variability with them. Moods are their worst trait since they could change so often, particularly at the moments when they lose something that belongs to them only (like lovers). The ego becomes then gloomy and insecure, awaiting the loss of someone they love, and this fear of losing a person of their lives is something that they hate, and that causes them to feel insecure. As soon as you see such a mood, it is best put those who are born on June 29 in a hug, and warmly say a thousand times that you loved them, because they want to be loved and accepted.