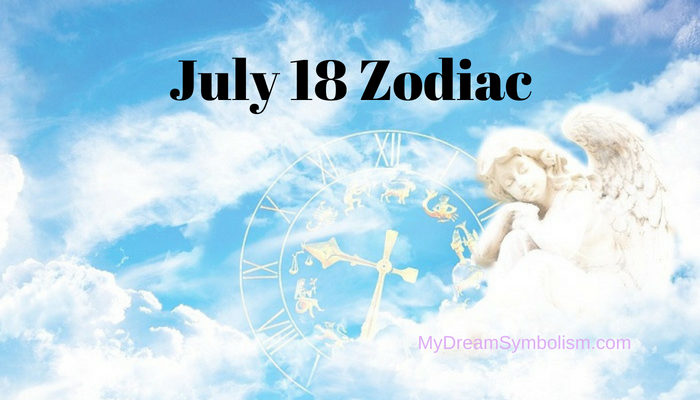 How many times it has occurred that you have read about the horoscope that now you have come to the state where you can recognise a Scorpio or a Leo when you see them. But then you think to yourself, no way, Astrology is not a science, it just here for fun.

But we will tell you right now, Astrology is a complex science (method), that has many details in it, besides the ruling Zodiac sign, and all those elements are connected to each other and make people as they are with all of their characteristics and traits.

All these rules can be applied for the analyses of the birthdates; it is also “material” that has many elements to it, that are all interconnected in some way, like for example numerological aspect and the astrological aspect of a specific date.

Today we are looking into July 18. For the beginning, we ask you to remember a person from your environment who is born on this day, and we dare you to try to realise if these people have something in common, or do they have some characteristics that we mentioned here.

Those people who belong to the July 18 are believers and fighters in life, and they are defending their views – they can find themselves in a situation to speak on behalf of those whose opinions do not matter. And you will be able to see in this article how much these people are oriented towards humanity interests.

These people can make big changes in every aspect of their lives, and others can see them as an ideal representative or group leader a role that these people take, but how they act in this role.

Whether it’s family, clubs or work organisation, these people can become the living symbol of the group they represent. We will give you one example here – Nelson Mandela; is there any obvious example of the character of the people who are born on July 18? We think not – he was just this, a person who had beliefs and who finds himself in a position to become a leader, and later on to become an icon.

As long as these people who are born on July 18 maintain strong relationships with their family, friends, associates, they have a great predisposition to become very influential and powerful persons -in most of the cases these people become just that. If it happens that for some reason they are derailed from their original path they can go through periods of insecurity, crisis and re-evaluation of their values.

Private life as opposed to their business lives in people born on July 18 often suffers from their over-engaging business engagement. It is therefore crucial for them to find enough time to spend with their partner or children, because you know these people need balance and they need to have all things aligned to be victorious in all phases of life. Many people born this day are adapted to social interactions but are often emotionally immature so that they can have major problems in their personal lives.

Another thing that stops them from growing without a problem is an inner conflict that is inside of them – they are active fighters with tender emotions, and making a balance between the two is hard.

There are many different types of the people who are born on July 18, but all of them share emotionality and passion, two traits that could be best seen in their interpersonal relationships. 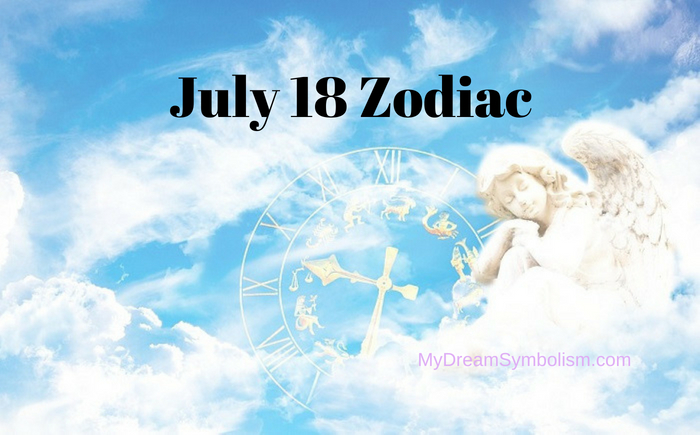 Some people born this day do not express their emotions with ease – they are very likely to be calm, and gentle.

But also some representatives of this date could be cruel and overly temperamental towards their lovers, even expressing jealousy and rage – this is all thanks to the influence of the war planet Mars.

These people like the company of people, so they are flirting without being superficial or eccentric in any way they like to have a good time, and in those times they are not interested in intellectual things, they want to have some fun.

For some lovers, those who are born on July 18 will seem as irresistible, and they love partners who will admire their beauty, so they can exhibit the constant desire to dress the part – the look that says – I am imaginative, and I like all sorts of pleasures.

To discuss more the careers of these people who are born on July 18 are mobile and dynamic, they have a lot of energy that can invest in something that is very useful for many people – no matter if it’s something physical or mental. And in this sense, we can mention Richard Branson, a person whose life is dedicated to the research and exploring new ways of helping and improving humanity; and he does this very successfully.

It happens that people born on the 18 of July are in the first place defending social interests. Regardless of whether these people are actively involved in politics or do not -they have an established set of principles under their control.

Those who are born on July 18 have the willpower and concentration to achieve greatness, so they should succeed in anything they are getting into.

Also, because of the influence of the Mars, these people have a strong body, they love sports and outdoor games of all kinds, but more it can be said that these people are intellectual types, they love to read and love books and are especially attracted to science and philosophy.

As workers those who are born on July 18 are tireless, it is never boring for them to do those things that interest them, but what will they do depends on their lifestyle and temperament that can vary a lot.

Persons born on the July 18 are living under the number 9 and are under the planetary influence of the Mars, which stands beside the Moon that is the ruler of all Cancer Zodiac sign people, to whom these people also belong are number 9 and planet Mars.

The persons born on July 18 are under this combination Moon-Mars planets. These planets are connected, and there is a strong connection between them, and those who are born on this day should be aware of the dangers of excessive emotional outbursts and tendencies to conflicts (this tendency comes from the planet Mars, but the emotional Moon makes the problem, since these people can be hurt easily). They may mix their emotional needs with the needs of others and that people of the July 18 can be caught up in that confusion; because Mars is the planet of strong energy, while the Moon is somewhat passive and emotional. The main goal here is to make things come into the balance, and those who are born on this day can do that.

Numerologically speaking, those who have numeral 9 in their charts have a powerful influence on the others, they are the smartest and wisest people, and they have a powerful and influential effect on the people from their surroundings.

People of this day July 18 are connected to the color is ruby red, and their number is nine.

Sometimes people forget where they have come and how they get there, and history is a fantastic reminder of that. Today we are looking into more details about the date July 18.

64 – The great ancient city of Rome suddenly was caught up the fire from the fireworks that lasted six days and seven nights and destroyed nine of the city’s 14 districts.

1290 – King Edward I expelled the Jews from England.

1536 – English Parliament passed a decision not to recognise the papal authority in England.

1916 – Arab leader, in a proclamation, urged his compatriots to fight the “ungodly government” of the Turkish Empire.

1936 – A civil war in Spain began in an uprising in Melilla, Spain’s Morocco, against the People’s Front government of Prime Minister Manuel Azaña.

1942 – The United States announced the war in Bulgaria, Hungary and Romania in World War II.

1972 – Egypt asked the USSR to withdraw all 20,000 military advisers, accusing Moscow of failing to send the promised weapons.

1976 – Nadia Comăneci became the first gymnast in the history of the Olympic Games, which received a score of 10.

1994 – 96 people killed in a bomb blast in the centre of the Jewish community in Buenos Aires.

1995 – After a long period of rest, the Soufriere volcano started an eruption that caused great damage to the island of Montserrat.

2000 – The Indonesian army recognised the participation of some of its troops on the Muslim side in the long-running Christian-Muslim War on the Maluku Islands.

2002- Moroccan Frenchman Zacharias Mousawi, the only accused for connection with the attacks of September 11, 2001. In the United States, pleaded guilty before the court in Alexandria.

2002 – The Swiss government submitted an official application for admission to the UN.

2004 – The world’s largest satellite for telecommunications Anic-F2, a Canadian operator Telesat, was launched from Guyana.

No one was born as a hero, and some heroes were poor and uneducated, but they reached the heights of the life; while others had all the privileges in life, but they followed their path and made a difference in the world. These are our heroes who are born on July 18.

1950 – Richard Branson,  the founder and chairman of Virgin Group of companies.

To add up more “fuel” to this personality story, we will speak of other characteristics that create personalities of these Zodiac Cancers that are born on July 18.

People born on the July 18 must have very intense emotions, and whether these feelings are publicly expressed or deeply suppressed, they have incredibly adverse effects on their health – they can be confused and under stress.

From too great a rear to be rational, these individuals can focus on their spiritual powers to deepen their feelings even more. A very harmful effect on these people can have both over-control and uncontrolled emotions -they need to find a balance so that they could live prosperously. But finding a balance is never an easy task, to begin with, let alone to maintain that state.