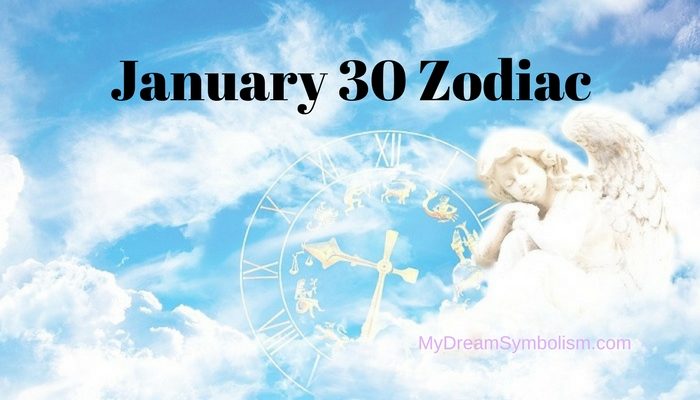 Some astrologers say that everything that is related to the horoscope is, in fact, closely associated with our dreams, since it touches our subconscious. In that state the body of a person comes gradually and slowly, interrupting that occasion the connection with the outside world. And similarly, in the world of Zodiac signs and horoscope -it is the person’s interpretation that can be as a form of entertainment or something much more serious.

There is a lot of truth about it, do not doubt it, but it happens that people miss the point of the Zodiac signs. Of course, by reading the horoscope and looking into our birthdate, we can have fun and also enjoy. But also we can learn so much, about the world that surrounds us, and also about ourselves – our birthdate can give us the guidance that we need in life.

Persons who are born on the January 30 are the people, who others describe as eccentric human beings who are even weird, but they are those who have a sympathetic sense of cynicism and irony, and they don’t mean any harm to others. Their environment likes to have them around, they make people happy and entertained, and they can give good advice.

On a more negative side, these are the people who have ‘thin’ nerves, and they can be easily irritated and don’t shy away from conflict. These conflicts can be in any area of their lives – job, love, and friendship. People who celebrate their birthdays on the January 30 have many opinions and are ready to present them to the people, no matter how controversial those beliefs can be at times.

But after all, these people are compassionate and creative human beings who love changes and are not afraid of changes and are always ready to make a move in the right direction; they like to take risks in life. They are those people who play on all or nothing.

People are attracted to their seeming indifference towards others and their uniqueness and originality, but for some these people can seem like crazy persons who are not like everybody else.

There is no surprise here, people of the January 30th are like all those who are Aquarius sign in the horoscope – in love they are afraid of being tied up to one person(this notion scares them). What motivates this fear is an idea of losing their freedom and independence, for that is their first and most significant love – to be free and independent in every aspect of their lives.

It is not like they don’t like to be in a long-term relationship with someone they truly love and care for, but will stubbornly defend their freedom at all costs.

They are undoubtedly people who will tell you everything about their desires (even the darkest ones) and the ideal partner, who will be maybe in shock when they hear all about the requirements that are necessary to be with them in a relationship.

Their partners could be scared, realising that they are not even close to the imaginary partners, and far always from that ideal lover. 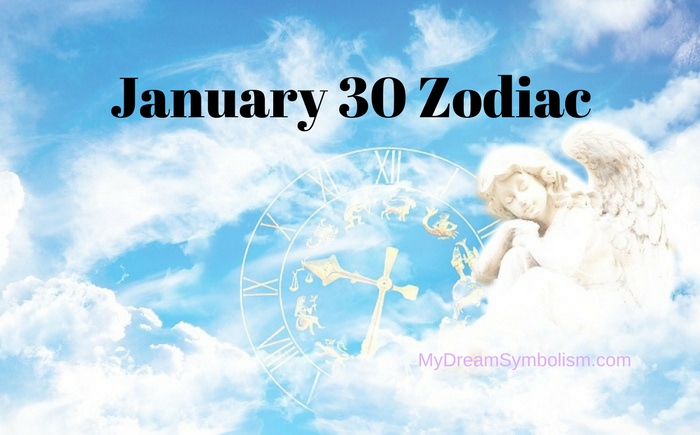 Regardless of his imagination inclined to ideal fantasies, people of the January 30th are in fact very rational in practical life, both in work and in love. So when they choose a partner, be sure that they think it thoroughly

They are very persistent in their endeavors, although they are never rude and non-active in the love area of life. Their originality, even when they doing something silly, can impress their potential partners. In the end, they are excellent and exciting lovers, and you will not make a mistake if you fall in love with one representative of this date.

These people, who are born on the January 30, always bring enthusiasm to the work; they have the extraordinary ability to exploit their imagination for business purposes. A career that allows the development of concepts and demonstrations can fit well with these people. Not everyone knows how to make money and successful careers by exploiting their creativity and ideas.

Their work is always based on their knowledge, and that experience is waste and significant; they have a fantastic combination of the high intellect with the readiness to share their talents – people of the January 30th inspire many who work in their surroundings.

Like all Aquariuses these people belong to the ideal type of “workers”, they like to engage in jobs that aim to make humanity better.

When it comes to money, these people of the January 30th have the talent to keep the balance between spending and saving money. When they go shopping, they are in love and want everything that is extravagant, glittery. But they have taste that is not a problem; they can even find their occupation in decorating other people’s homes. Most people born under the Aquarius sign, as well as those who celebrate their birthdays on the January 30, are well-adapted to their sense of style and are not afraid to show it.

They can find their careers in any performance art, writing, teaching, photography or pilots are very appropriate for them. The best environment is what gives them the freedom to solve the problem without strict guidelines. They are an unconventional type of people, and if it has the opportunity to show its talent, people of the January 30 can achieve enviable success.

They can be symbolically described as people who are under the Uranus government.  In astrology, Uranus is a symbol of rebellion, sudden changes, reforms, and the ruin of the old and the birth of a new one, for all unusual, unexpected and unconventional.

Their colour is some kind of mixture of blue and green, and their numbers 3, 10 and 55.

Historical events on the January 30

1018 – A peace was signed between Poland and the Holy Roman Empire.

1595 – A play “Romeo and Juliet” played for the first time; it was the most famous play of William Shakespeare.

1648 – A peace contract was signed in Munster, and it was concerned with the eight-year war between the then country of Netherlands and Spain. In October of that year, Spain was forced to recognise the independence of the Netherlands, which enabled the country’s rapid economic and cultural bloom.

1649 – In London, an English King Charles was executed and after the defeat of his forces in the civil war with the Republican forces of Oliver Cromwell. His execution provoked outrage and anger at European courts, and in the Netherlands and Spain, the diplomatic representatives of Cromwell’s state were killed. Monarchy in England was restored in 1660.

1661 – Oliver Cromwell, the protector of the Communal of England, was ritually executed, on the anniversary of the death of the king whom he cast out.

1661 – Polish-Lithuanian state union has transferred to the Russian Empire Kiev, Smolensk and part of Ukraine east of the Dnieper according to the provisions of the truce from Andrus.

1667 – The peace was signed that ended the Russian-Polish war.

1826 – The Menai Suspension Bridge between Wales and Anglesey Island, which is considered the first modern hanging bridge, was opened.

1841 – The fire destroyed two-thirds of the Puerto Rican city of Mayaguez.

1889 – Archduke Rudolf, a successor of the Austro-Hungarian throne, was found dead in the Mayerling Castle, along with his mistress Maria Vetser.

1913 – The British House of Lords rejected the Law on Irish Self-Government.

1937 – Thirteen officials of the Communist Party of the USSR were sentenced to death for alleged involvement against the top of the state.

1937 – Adolf Hitler told Reichstag that Germany withdrew its signature from the Treaty of Versailles.

1964 – In the USSR for the first time in the history of cosmonautics, one rocket launched satellites in different orbits. They were named “Elektron 1” and “Elektron 2”.

1967 – Pope Paul VI met with the President of the Presidium of the Supreme Soviet of the USSR, Nikolai Podgorny, the first head of the Soviet state who visited the Vatican.

1969 – The last public performance of Beatles was held on the roof of their production company Apple Records in London. This improvised concert was interrupted by the police.

1972 – Pakistan left the Commonwealth in protest of the decision of Great Britain, Australia and New Zealand to recognise Bangladesh.

1992 – Argentina opened the dossier of the Nazis who fled to South America after the World War II.

1995 – In an explosion of car bombs, at least 20 people were killed, and about 60 people were injured in one of the worst attacks during the three-year rebellion of Islamic extremists in Algeria.

Famous people born on the January 30

1924 –  Lloyd Alexander, an American writer of SF-novels for children and young adults.

1934 – Giovanni Battista Re, the Cardinal of the Roman Catholic Church.

1937 – Vanessa Redgrave, the British actress, considered the most famous and distinguished member of the Redgrave family, one of the most renowned acting dynasties in the world.

1941 – Richard Cheney, the US politician and vice-president of the United States.

As it is to be concluded, people of the January 30 are full of surprises. Do not expect from them to follow you with fire in your eyes and act like a typical people, everyday people who represent everything that is mediocrity.

There is something in them, something extraordinary, they are the people of knowledge and guessing, they can be the light in the tunnel of ignorance and banality, but they can also be described as the fire that cannot be distigushed.