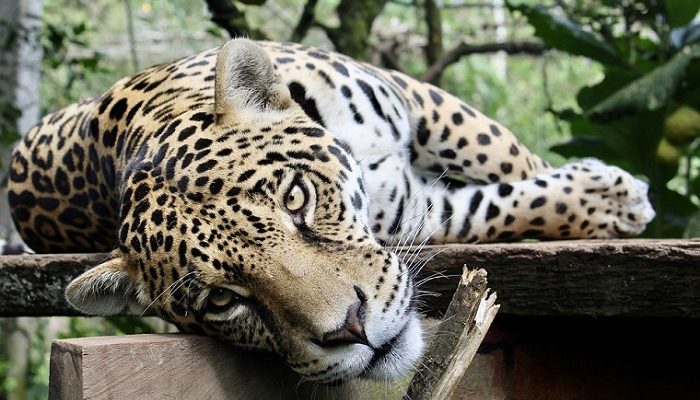 Just a glance of these gorgeous spotted beauties simply astounds you. Jaguars are magnificent, wonderful and dangerous big cats that have been adored and worshiped for ages.

These big felines inhabit Americas’ rainforests, but they do not hesitate passing vast open areas such as deserts and scrublands. Although population of jaguars had decreased through historical eras, these animals are still widely present across Americas.

Jaguars’ worst enemy is probably man. These amazing creatures have a prominent position in Mayan, Aztec and familiar civilizations belief systems, mythologies, legends and folklore, but are also popular as modern culture motifs.

The word jaguar actually means ‘beast’ in one of the local languages. Its name is derived from Tupian term yaguara, which means beast, but it is sometimes translated as ‘dog’, as well. Jaguars are indeed beasts, beautiful, elegant and dangerous four-legged ‘monsters’.

This enchanting animal is highly praised by local people; it is commonly associated with gods, it is a deity itself and it has an important role in shamanic rituals. All across Mesoamerica, you could find remains of ancient temples with many jaguar motifs.

Jaguars are powerful creatures, in both reality and the realm of symbolism and spiritualism. Its natural traits and characteristics make them impressive in both senses.

Jaguar totem is common in Americas, because this animal is a creature to look up to, to fear of, to worship it and to be guided by.

Jaguar spirit is powerful, strong and intimidating. These felines are primarily adored for their royal appearance and their incredible natural skills.

Jaguars in Americas’ folklore and mythology

Jaguars are featured in many American stories and legends. Their symbolism was particularly strong during pre-Columbian period. Local people have always been admiring jaguar’s agility and speed, extraordinary hunting skills, its beautiful appearance and posture.

Similarly to lions or tigers in New World’s societies of the same era, jaguars were (and they still are) one of the most loved and feared of creatures in both rational and spiritual sense.

There are many legends about jaguar-gods, shape-shifting jaguar stories, shamanic rituals featuring jaguar spirit and so on. Jaguars were particularly important to Olmecs and Mayas. 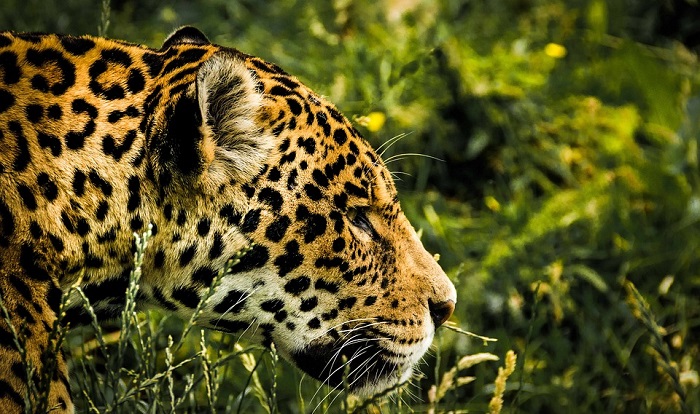 Jaguar cult was predominant in pre-Columbian New World’s era. Stories about these magnificent cats are many and we will share one of the most interesting. This is Mayan jaguar legend that explains how this beautiful creature got its spotted coat and how that event had changed Jaguar’s life.

Once upon a time, all rainforest animals lived in perfect harmony. Beautiful jaguar was one of the most adored and admired creature at the time. His beautiful fur was of a pure yellow-gold and Jaguar was quite pride of it. He would often boast about his perfect, unstained skin.

One day, jaguar was resting beneath an avocado tree and some monkeys were playing with the fruits above. One of them accidentally dropped the fruit and stained Jaguar’s beautiful coat. Presumed animal was so angry that it caught the monkey and killed it!

Frightened and offended, other monkeys went to the lord of the Mount, protector of all living things on Earth. He listened to them and thought out a punishment for proud-spirited Jaguar.

The next day, monkeys lured Jaguar to the black sapphire tree and threw fruits on his body. He got stained all over and immediately ran off to bathe in a pond nearby.

However, those stains were magical and he could not get rid of them. That was a powerful lesson for narcissistic Jaguar!

According to the legend, since that day, all jaguars have black spots and they hunt down monkeys and other creatures living in the jungle. However, they have remained adored and worshiped by people.

Their beautiful coat got an amazing, distinguishing feature, making them look even more impressive. This strong and skilful animal possesses great characteristics and strong spiritual power.

Let us see what jaguars represent in that sense.

Jaguars have amazing spiritual energy. Just a sight of this elegant, royal big feline leaves you breathless. Jaguars are agile and efficient predators that move silently through woodlands and swamps of Americas’ rainforests.

They are impressive living beings. Thanks to all the traits and powers ascribed to these amazing felines, jaguar motifs are common all around the world; they are synonyms for strength, power, authority and courage.

Strength and agility – Jaguars are similar to leopards, only they are little bigger. They share the same elegance and grace of silent pace and sophisticated moves. Jaguar’s body is muscular and strong; this cat has amazingly strong jaw and paws, sharp teeth and delicate senses.

Jaguars move quickly and easily catch smaller mammals. They can eat their prey in a matter of seconds! Jaguars could grow big and heavy, but their bodies are agile and flexible. They are fast and skilful climbers.

Jaguars are true kings of rainforest. They would attack larger animals, drag their prey to some hidden spot, and eat it. Their jaws are similar to canines’ and ‘updated’ so jaguars could easily crack or pierce turtles or armadillos’ armor. Jaguars are masters of stalk and ambush; they rarely chase their prey.

Unlike other wildcat species, jaguars attack people in extremely rare cases. However, their wild nature makes them untamable. It is not strange that jaguar attack workers in zoo, for example. Jaguars are strongly associated with impressive strength, agility and mastery of stalk.

Power and authority – Jaguars appear elegant and royal, so they are symbolically associated with luxurious things. They stand for something royal and divine. People have been admiring them for centuries, amazed by their extraordinary looks and incredible strength and skills. Jaguars were very important symbol of power and authority in pre-Columbian Central and South Americans.

Jaguar was a powerful deity in pre-Columbian America’s mythology. The only god considered even more powerful was the snake god. There are many examples of jaguar worshiping and the connection between this beautiful dreadful creature and concepts of rule and social position. Jaguar was an important character in different Central and South American myths and legends.

Temple at Chichen Iza was dedicated to the Jaguar god. During the coronation procession, every future king had to take a walk under watchful eyes of colonnade of stone jaguars, in order to please the magnificent deity;

Beauty and elegance – Pre-Columbian Americans adored jaguars as powerful, martial and authoritative mythological figures and they admired real jaguars for their beauty and skills. They considered them dangerous, but simply irresistible and impressive.

That depiction did not change over all these centuries. Jaguars stand for beauty and elegance, but not that of a delicate sort. In modern times, jaguar also stands for elegance, luxury and power.

There are many uses of jaguar motif in modern era. We have that famous and attractive classy car brand, jaguars are often featured in commercials for beauty or fashion products and motifs of jaguars are commonly used for logos, coats of arms, labels and so on.

Jaguar as totem and spirit animal

Jaguar totem is a powerful and tricky one, because its strength and influence are overwhelming. People born under Jaguar totem should be aware of all advantages their totem offers, but also able to control them and balance them properly.

Jaguar totem offers great power, help and protection, but only if you listen and reason things carefully. Jaguar people are very charismatic and impressive, but they could be intrusive and hard to deal with. Here are the most common Jaguar people traits that make them awesome.

Jaguar people radiate positive vibrations all around them. If they simply let their natural charisma to develop, they could be inspiring figures people love to spend time with.

These individuals easily catch the spotlight and they do that naturally. They shine wherever they arrive and fill the space with their presence.

Sometimes, people could find it intimidating, so jaguar people usually have to approach others who are amazed by their appearance and spirit, but afraid to get in touch. However, jaguar people are self-confident and they easily get engaged in conversation.

These individuals are good friends and people often seek an advice from them. They want to help others, but above all, tend to inspire them by their uniqueness and great ideas.

They are innovative, creative and influential. Jaguar people always stand out the masses and do not like to be ‘common’.

They have to channel their strong energy in a positive way, in order not to become too narcissistic and obsessed with their own qualities.

People born under Jaguar totem are usually athletic and strong. They like to be active and work on their bodies, paying attention to their health and appearance. They are also determined and strong willed.

Once they set their goal, no one can stop them. They are ready to endure difficulties and get over obstacles their faith puts on their way. Jaguar people also use their strength to protect their loved ones or others who are weaker and seek for help. They are courageous and ready to stand for those whom they love.

However, all of these qualities can be reversed, if a person does not learn to channel amazing energy their jaguar guide offers. Jaguars are not much calculated totems.

They give you their energy and power, but it is you who have to recognize it and direct it in a good way.

These are traits associated with jaguar people that could be polished to perfection in a positive manner, but only if you put an effort to that.

Jaguars are proud and beautiful animals and they know they are masters of the jungle. Your animal spirit passes that sense to you. Jaguar people could get unbearably self-obsessed and narcissistic.

They are aware of their qualities, such as beauty, good taste, strength and charisma, but they could easily go astray with these. Such individuals do not only catch spotlight, they steal it and do not even get others a chance to present themselves or stand out.

That could be annoying and make jaguar people undesired to be around them.

Jaguar people are strong willed and determined, but they could also become stubborn to the bone. They would never surrender an argument, even if they know they are wrong. Their pride will not let them do that.

Just slow down a bit and calm down your natural need to be perfect and best at everything. You could use that energy far better than that! If you channel it in a good way, you could get yourself an amazing success in all areas of your life.

Charismatic and influential people like Jaguar individuals are often people others gladly look up to or seek their protection and advice. Jaguar people are good at this.

They are natural born leaders and they could do very well in jobs with some prominent position, from where they could spread their ideas and inspire others. However, they could go other direction and become authoritative, demanding and merciless.

Do not lose your understanding of others and listen what they have to say, in order to polish your Jaguar totem traits to a positive perfection.