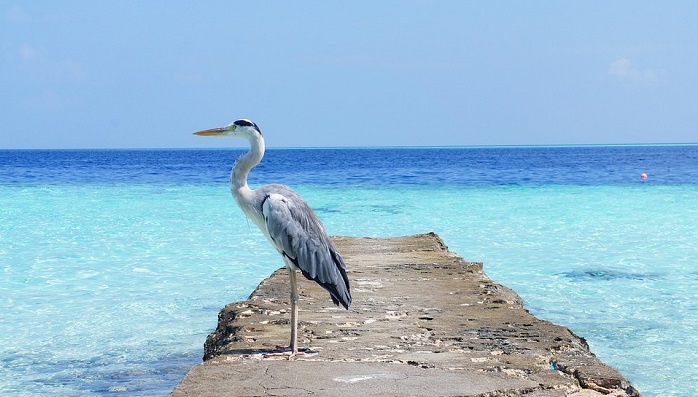 Blue bird or heron is by far one of the most widely known specie of herons. It inhabits different parts of the world and lives in areas abundant in waters and plants, including marshes, great swamps, rivers, lakes and seashores.

However, if the winter is severe and waters do freeze, herons would travel to the nearest source of free flowing water, such as a nearby river.

These elegant and beautiful long-legged birds symbolize peace and tranquility, in the first place.

Herons are beautiful and gentle creatures that amaze people by their habits and behavior, so they also have significant symbolic meaning;

Herons’ behavior and appearance are quite impressive. These relatively large birds can reach up to two kilograms; their feathers are mostly grayish-blue, while the rest of the body is white.

Grown up herons have several black feathers on their heads and strong, yellow beaks. Both male and female herons look almost the same, but they could slightly vary in size.

These animals are tranquil and family oriented, so people respect and appreciate them.

Herons are monogamous and devoted partners. They are likely to spend the whole life with the same partner;

Herons live in couples and they are devoted to their family. Before mating, herons perform some kind of specific ‘marriage’ ritual dance, during which they bend their long necks in a characteristic manner.

Once they have chosen their ‘significant ones’, herons prepare their nets. Both partners do it together; they make sure they have found good and safe place to raise their offspring.

They make nests on tall treetops, in reed or even on the ground. Females lay up to six bluish eggs. 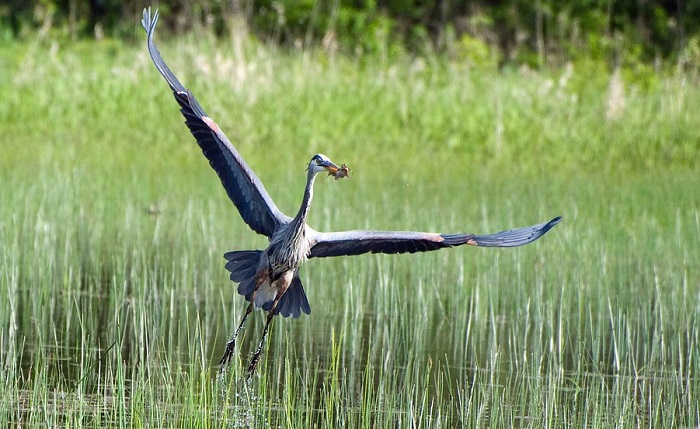 Heron couples build their nests together. Once the female lays eggs both parents take care about young birds; Herons feed on fish and have a specific way of hunting prey.

They would stand still and quiet in shallow waters, patiently waiting for their prey to swim close to them or they would sneak up to them silently and seamlessly.

They are efficient in catching fish; with fast and immediate reaction, they would simply grab it with their beak.

Herons are a role model for patience and efficiency. Their way of hunting prey adds up to patience, waiting and incredibly fast reaction;

Herons have been appreciated all around the world and throughout history of human civilization.

Many great traditions praised and loved these incredible birds. Herons have always been associated with waters and the harmony of life; in most of human societies, herons have positive symbolism.

In Ancient Egypt, herons were associated to Egyptian gods, particularly Osiris. Pictures of herons could be found on wall decorations of Ancient Egyptian temples and tombs, for example.

They are present in Egyptian mythology and art.

For Ancient Egyptians, heron was the messenger of divine forces, the one that guides souls of the deceased gods to their afterlife.

They believed that so called Bennu bird was the child of Osiris, born out the heart of this mighty deity;

Egyptians identified heron with this bird. It is featured in Egyptian Book of the Dead. According to this ancient source, the Heron was Gods guide to the Underworld.

Once the deity died, the Heron would help their immortal soul reach the lands bellow.

They could simply stay there for the whole eternity, in peace, until they decide to rise again and be reborn.

Celtic Lady of the Lake

Different pagan European societies considered herons a symbol of peace, silence and tranquility. In Celtic folklore, herons were associated with gods, as well.

Celts believed heron was an incarnation of the goddess called Rhiannon, which was a Celtic deity associated with lakes and waters. This goddess was loved and worshiped by Celts.

Rhiannon was a protector deity; she would help people who are lost to find their way home.

She was guardian of lakes, important to Celts as magical and useful water sources.

In Celtic tradition, herons were associated with the goddess Rhiannon. Heron was called the Lady of the Lake, after the deity mentioned;

In Ancient Greece, herons were one of the common bird symbols. This incredible creature was considered divine and fortune telling.

Greeks loved the bird and associated it with their beautiful and kind goddess Aphrodite.

During the age of antiquity, herons were believed to be good omen, especially for people who were bound to waters.

During the Old age, herons were believed to be fortune bringing. It was also believed specific parts of their body protects from evil forces and have healing properties (e.g. herons’ feathers, beaks or fat);

Herons are to be seen in Chinese and Japanese traditional art pieces, although they are not all blue birds.

However, the symbolism of herons in far Eastern culture is inspiring. In Japan, there are several legends telling about people who have died and then turned into a heron bird.

Generally, herons are positive symbols in Japanese culture. In china, symbolism is similar. It is believed herons bring fortune and guidance.

They also represent purity and longevity and play the role of soul guardians on the path to afterlife.

From these cultural interpretations of heron symbolism, we could only conclude herons are very positive and fortunate spirit animals.

They are gentle, very elegant, patient and pure spirits.

In addition to these conceptions, spiritualists would ascribe many other positive attributes to these amazing birds.

The following ideas and concepts are commonly associated with magical herons.

Herons are impressive looking birds, with their long legs and distinctive colored feathers.

Their nature is gentle and caring, so they naturally represent all the things we consider positive and sophisticated.

Their tranquil and relatively slow movement reminds us to be patient and reasonable in our lives.

Herons stand on their both or one leg in shallow waters, still and peaceful.

This behavior inspires people not to give up their cause, but to keep to their desires, plans and dreams.

You certainly have an idea on how do Heron people behave and think, since we have went through these amazing interpretations of heron spirit animal symbolism.

If you are born under the totem of Heron, you must be a personality with great values, the one who appreciates life and natural cycles.

Heron people are kind individuals, dedicated to their goals.

Heron people put much effort in what they are doing, so they are successful in almost every aspect of life, including both career and emotional life.

However, they do not seek for prominent positions, status of a great leader, celebrity or so. They enjoy their uniqueness and express it through their hobbies or other interests.

They do not pursue immense material success, but would make sure to provide everything needed for a comfortable life.

They are patient and the ultimate goal for them is to have peace and comfort. They know any form of success requires both work and patience.

They are determined, focused and confident. Heron people are individuals great to work with.

They do not seek conflict, but would always stand their ground and defend their ideas.

Heron people are sophisticated and kind towards others. They would never harm other people intentionally. They would help people in need, but rarely will they do so if not asked to.

Generally, they always have a peaceful and friendly approach to other people. Heron individuals are good listeners, but you could also learn much from their experiences.

They have good insight and understand others. Their tolerance level is high.

Heron people are supportive and caring. They love their family the most and would make sure their loved ones are always safe from any harm.

They express total devotion to their partners and would never cheat on them.

These people are extremely self-reliant. They do not need much help from others, because they love to do things on their own.

They are confident, which is the reason they would actually ask for help if needed; they do not think such an act would ruin their reputation or so.

Heron people act the way they feel and follow their good intuition.These people express incredible analytical and planning skills, so they are able to properly organize their life.

The most important trait of Heron people is stability. They are well organized and they love routine.

Sometimes, that could lead them to boredom or feeling numb, so they need additional motivation.

Generally, the feel comfortable with their habits and would rarely make significant changes.

As you might assume, this could be both good and bad.

We could hardly say stability is a negative concept, but it could make you miss out some great opportunities.

Heron people are quiet and reserved. The ability of keeping their mind clear is another important trait; they do not rush or make unreasonable decisions.

They choose their company carefully and tend to avoid social situation, not because they feel anxious, but because they are simply not thrilled by the idea of big gatherings or events.

They value their harmonious environment the most.