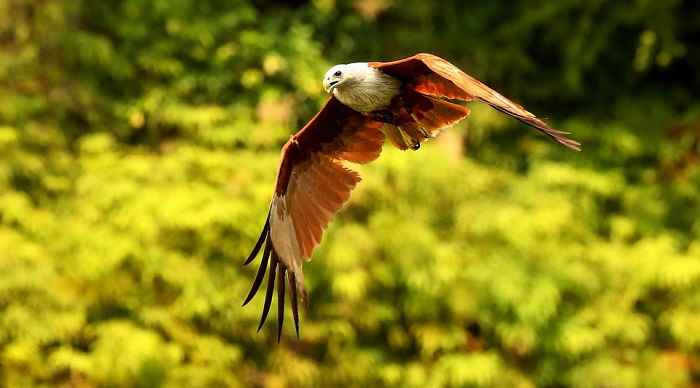 Hawks are magnificent birds of prey, similar to falcons and much larger and breathtaking eagles.

Most of people usually have many doubts about differences between these amazing sky hunters, so we will try to explain them shortly.

However, these physical and even behavioral differences do not influence their symbolism that much. It varies slightly, depending on the habitat of particular specie, because there are many variations and subfamilies.

In general, all of these animals share the same symbolism, because all of them are efficient hunters; they have sharp, excellent vision and amaze us with the tranquil breathtaking flying skills and their proud appearance.

Hawks are similar to falcons and eagles, especially in terms of symbolism, even if those birds do not even belong to the same genus;

Ok, so before we discover richness of hawk symbolism, let us clear up what the differences between these three amazing bird species are.

First of all, they do not belong to same classification groups. Eagles and hawks are members of Accipitriade family, while falcons belong to the family of Falconidae.

All of them are birds of prey, they hunt during the daytime, so they are called diurnal birds. However, they are not the same in size and each one of them has specific hunting habits.

Eagles are the largest of these three, hawks are medium sized, while falcons are the smallest of them;

It is interesting that each one of these diurnal hunters have different way of catching prey.

They do not even feed on same sources of food; there are many subspecies, as well, of which some have specialized to catch fish, while others feed on small or bigger mammals or other birds.

It is also interesting that each one of them has a different flying style. For example, hawks, which are the main subject of this article, fly in a specific pattern of combined ‘glides’ and ‘flaps’ style. 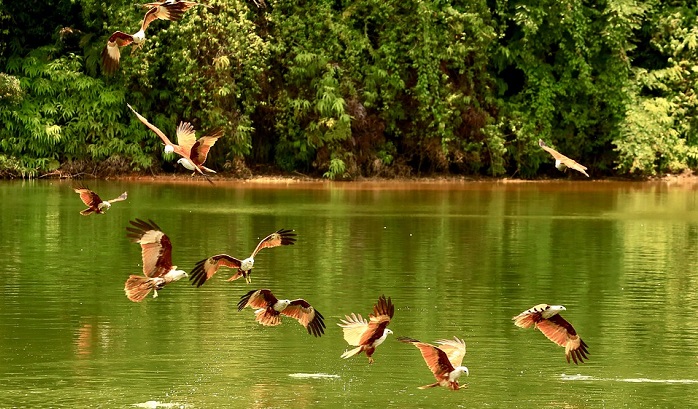 Since different species of diurnal birds of prey share many characteristics, it is not uncommon their names are a kind of mixed up.

For example, certain species of falcon is called ‘duck hawk’ (it is the most popular specie, peregrine falcon) and an osprey is called ‘fish hawk’.

Most of these birds are similar in appearance and slightly vary in size, so it is not strange to think of them as the same bird.

Most of people, who do not have any expertise in prey birds knowledge, usually think of hawks and falcons as the same species, while eagles are easier to distinguish;

This leads us to hawk description, which will help us understand their symbolism and spiritual energy. Hawks are medium sized birds of prey that hunt during the day.

Some scientific evidence on avian intelligence measurement claims they are one of the most intelligent bird species!

In addition, these amazing creatures have incredible eyesight. Their vision range is incredibly wide. Not only they have amazing vision per se, but also they are also able to perceive ultraviolet spectrum parts.

Another interesting fact is that female hawks are commonly larger in size than males are.

Hawks are believed to be one of the most intelligent bird species;

Others are to be found in parts of Central America, Jamaica and West Indies. They are highly adaptive to different climates, but they love areas with fields or desserts, which are the most suitable for successful hunt.

However, they could also live in tropical areas, as well as in mountainous regions.

Hawks are known to be monogamous birds and devoted, caring parents;

Hawks are known for their specific reproductive behavior. They perform some kind of ‘love flight’ and it looks impressive.

A couple of hawks would fly to the heights in circular pattern and, eventually, they free fall down in a tight embrace.

Hawk couples prepare their nest together, before they mate and both parents take care about their eggs and the nest, as well.

It is also amazing many hawks are monogamous and they keep to the same partner for the rest of their life.

Hawk symbolism is similar to that of falcons and eagles. These birds are especially worshiped and admired by Native American tribes, since they mostly live in parts of North America.

In tribal folklore of those people, hawks are seen as protectors and guardians, amazing spirits that help people and guide them through hard times.

In many Native American societies, hawks’ feathers are believed to be sacred and those are commonly used for ritual decoration and as magical items during certain ceremonies and rites.

In Native American tradition, hawks are believed to be sacred animals, people guardians and spiritual guides. For example, Iroquois people believe the mighty Hawk uses fiery arrows and a bow, which help falcon do their divine task;

Hawks are powerful spirit animals. They represent things that are divine and pure. Similar to falcons, hawks are believed to have some special connection with skies, celestial forces and higher realms, unknown and unreachable to humans.

It is commonly believed these masters of skies are able to communicate with divine entities and carry their messages to our world.

They are mediators between human world and celestial realm.

Hawks are believed to be messengers from the realms divine and grandiose, far beyond common humans’ comprehension and out of our reach;

Hawks have amazing perception, which, in symbolical sense, could be interpreted as a symbol of an ability to fully perceive the bigger plan, to observe things to the detail and to have an amazing insight.

These divine messengers are associated with heavenly forces, higher knowledge, wisdom and freedom of thoughts.

They also represent some of the greatest values we could think of, such as truth, honesty, bravery and guardianship.

They observe vast fields in search for their prey, while we have to observe bigger picture in order to reach our goals.

The bigger plan we are able to see, the greater are chances to explore all of opportunities we have.

Hawks also symbolize awareness. They have sharp senses and carefully observe the world around them. In spiritual sense, this is a symbol of observance, caution and awareness. Hawks are careful and observant creatures; those are values humans respect and admire.

It is believed hawks can communicate with heavenly spirits and help us go through hard times in life. They are extremely strong protection symbols.

A hawk’s feather is believed to be sacred and to have amazing protective powers, for example.

If you see a hawk flying above you, it could mean divine forces are watching over you using the shape of this fascinating and beautiful creature.

Spiritual guidance and intuition – Similarly to other animals associated with flying, heights and skies, hawks also represent intuition. Their natural perception skills are identified with strong and powerful intuition in spiritual sense. Their association with protection and guardianship, combined with their celestial mediator characteristics, suggest these spirit animals are incredibly powerful spiritual guides.

Spirit of the hawk carries messages from realms above and helps us see through veil of material things. It helps us dive deep into our soul and discover amazing spiritual abilities we have.

It nurtures our intuition and symbolizes the very idea of it.

Hawk is a strong symbol of spiritual and divine power. Hawk spirit helps us see the greater picture and make us able to perceive things clearly.

Liberty and glory – Beautiful and elegant hawks master the skies in their specific manner of flight. They fly free across the blue skies, taking our breath away. People have been fascinated by such a sight since far past. Spiritual people believe a sight of a hawk flying in the wild is a positive sign and a symbol of good things to come.

It is believed hawks bring glory, fortune, wealth and success. It could be applied to falcon related dreams, for example.

Some warplanes’ series are named after hawks and their birds of prey relatives.

Their hunting and flying skills, along with their proud eyes and strength, make these birds a powerful warfare symbol as well, particularly in war aviation.

Wisdom and higher knowledge – Hawks are amongst those beautiful living beings able to reach heights we people can only dream about. We have to use machines in order to do so, but these beauties fly up to the skies by their own bodies. That is the reason why these birds are associated with concepts of ‘higher’.

In spiritual world, they are able to seek and collect knowledge that requires special state of knowing your spiritual self in order to get it.

Hawks, falcons and eagles all represent wisdom, which is strongly connected to the idea of higher knowledge.

Hawks fly high; they are spiritually connected to the sky and the sun. Since they are diurnal, these birds also represent the pure light, honesty, nobility, grace and beauty.

Hawk people are individuals with an incredibly positive and strong aura. It seems they emit positive vibrations with every step they make!

These people are natural born leaders, but those of a pure soul and a kind heart.

They are honest, compassionate and strong willed.

Hawk people are personalities that easily stand out of masses and easily win others respect and love.

If you are born under the totem of Hawk, you must be a person of great influence and amazing charisma.

Of course, that does not mean all Hawk people love to take the role of a leader. They will do that only if feeling so. Their intuition is amazing and those individuals easily see through others.

They are intelligent, flexible and eager to learn.

Hawk people might seem proud of themselves, but that does not stop them listening to others or taking someone else’s advices. They think good of themselves and are proud, but not self-obsessed.

Hawk people are kind and gentle, very noble. They are true ladies and gentleman! These personas have good manners and are confident.

You would always feel comfortable around them, even if they appear so fabulous and classy.

They do not hesitate to help or support other people’s causes or ideas; actually, they are known to encourage others achieve their dreams.

These people are optimistic and joyful. They do not like to be restrained by obligations and bonds. That explains why they are thoughtful and observant.

They never make promises if thinking they will not be able to keep them.

Once they decide something, they stick to it with ease. Hawk people are loyal, devoted, passionate and caring.
Protective and caring

This leads us to another great trait of Hawk people. They are protectors and guardians. These people are always there for their loved ones, especially their family.

Hawk people are parents to look up to. They nurture and take care about their children, but never to the point of spoiling them. Hawk people give valuable life lessons and make sure their dear children choose the path that suits them the most.

Not only they are amazing with children, but also they are also devoted and understanding partners.

Dreams about hawks are usually of a positive symbolism. There are only few exceptions when dreaming about these beautiful creatures may bring some kind of misfortune.

Hawks appear in people’s dreams as their spiritual guardians. Let us see what messages do they have.

Dreaming about a hawk flying on a blue sky in bright sunlight means others will soon recognize your value and grant you great respect;

Dreams about flying hawks may also suggest there is a journey ahead or that you will soon move abroad;

Dreaming about a dead hawk means there are some secrets around you;

Dreaming about shooting a hawk down means that you will be successful or that you will something, but it could also suggest your focus is too narrow and you do not see the bigger plan;

If you dream about a hawk catching his prey, it is a good sign, especially in working environment and financially;