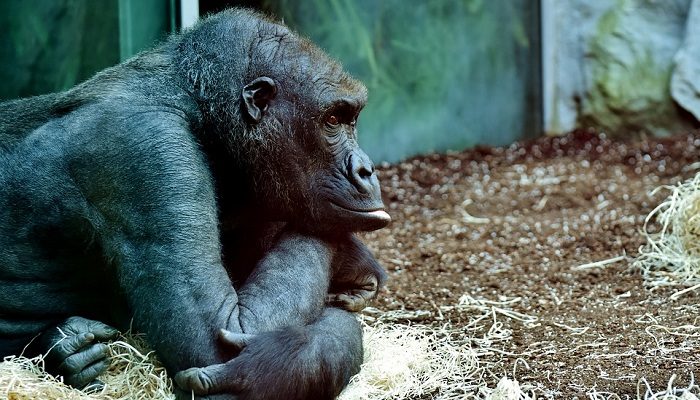 People have always been having divided opinions on apes in general.

However, there are various groups and species amongst them.

Gorillas belong to the family of Hominidae and they represent the largest of all primates living on Earth nowadays.

There are many amazing facts about these strange human-like animals.

People have always been fascinated by their size, behavior and appearance.

Gorillas are the largest of primates that inhabit the Earth today.

However, they are endangered, because of long periods of intensive hunt, destruction of their natural habitat and meat trade;

Although gorillas are classified as hominids, some scientific evidence has shown their DNA differs from that of all other primates, so they are thought to be completely separate specie.

However, we usually think of them as hominids.

In addition, their DNA is similar to that of humans. They are extremely intelligent and some of gorillas that had been living in captivity were able to communicate with people by signs. 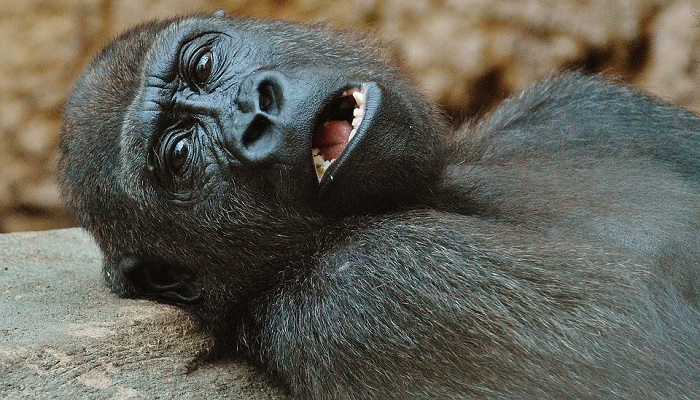 Before we move on to gorillas’ symbolism and spiritual interpretation, let us find out some fascinating information about these black rainforest giants.

These animals amaze people, but humans are also afraid of them. They are the strongest of all apes and certainly appear intimidating.

How do they behave and what impressive traits they have, follows below.

Two of these animals would never have the same pattern of their noses’ ‘design’. In fact, they are so different and unique that scientist may use gorillas’ nose prints the same way investigators would use our fingerprints.

Gorillas produce a set of sounds that help them communicate and talk to each other. These animals’ senses are very similar to those of humans.

They make facial expressions, gestures and posture positions that reflect their current mood.

Gorillas have nesting instincts and they love their young ones above all;

These large animals build nests in trees or on the ground and love to cuddle and sleep inside those.

They also have a distinctive motherly instinct. Female lowland western gorilla would pamper and nurture its baby with great love and devotion. She uses some kind of baby talk, in order to connect with her youngster.

Gorillas population faces decline because females give birth up to four times at best;

In addition of other threats that have lead to decline of gorillas’ population (and still do), these animals generally present with a very low reproduction rate.

Females would give birth to little gorillas only once in about six years, maybe four or five. In all of her lifetime, a female gorilla will have no more than four times.

These incredible animals have been inspiring stories and legends ever since humans have known of their existence. They are depicted in different ways, depending on a source of interpretation.

For Europeans and people outside Africa in general, gorillas have always been perceived as strange and exotic giant apes. In their homeland, there are various stories and beliefs about them.

Let us find out…

Europeans have been fascinated by big apes for long.

However, they have always seen these animals strange and even monstrous, to the point some believed these animals are some sort of half-human ghosts or spirits!

Such stories often originated from explorers, colonizators or other travelers who faced these strange animals for the first time, during their expeditions in Africa.

For long time, Europeans believed gorillas are some kind of mysterious half-human monsters and ghosts;

These unbelievable stories had been around until the beginning of the twentieth century, although some of those animals were taken to Europe and held in captivity.

One of the scariest and most dominant types of stories was about giant males, believed to take human females and take them into shadows of the rainforest, where they would do some nasty and dreadful things to them.

Back into the nineteen century, a famous French artist of that time, Framieu, made an expressive sculpture of a gorilla male carrying a human girl;

This sculpture caused a big scandal, because it was so scary and repulsive to curators of a prestigious exhibition the statue was submitted to. It had been rejected at the time and the dreadful image of gorillas persisted.

However, only two decades later, the very same artwork took the first place at the same exhibition.

Another interesting myth about gorillas is presented in the famous movie achievement of the past century, the ‘King Kong’;

The original story about this bizarre creature coming from deep African jungles originates from an old European legend about mysterious monster that resembles a man and lives in dark, deep, hidden corners of shadowy jungle.

Today, we are all familiar with gorillas, even if we have never seen them in nature or personally.

However, the mystery about these rainforest giants still lives on.

African people, who have known about these animals a long time before people from Western world encountered them for the first time, think of these animals in a totally opposite way.

For African tribes, gorillas represent great values, such as protection, guardianship and parenthood.

Long time ago, people living in areas inhabited by gorillas have noticed these large apes always spend time in groups, so they concluded gorillas love their relatives and children.

African folklore depicts gorillas as kind and protective animals and people think of them as a symbol of family bonds;

Gorillas certainly possess strong symbolism, since they have always been fascinating to humans, especially in the Western world.

Gorillas are exotic animals, inhabiting only African continent, so no strange different legends and beliefs have developed over time in other parts of the world.

Speaking of this animal’s symbolism, we could analyze facts and depictions mentioned and put them into the spiritual context.

Strength and masculinity – Gorillas are strong animals, no doubt. Silverback gorilla, named after a distinctive patch of fur, represents the true leadership, raw masculine power and strength. It is a grownup, more than twelve years old male that takes the dominant role in gorillas’ pack. He is the one responsible for all decisions and actions taken by the ‘clan’. He leads and protects others, resolves conflicts, decides on food sources and takes care of safety and welfare of the group.

This symbolism is so strong that people use it to describe particularly tough men (e.g., security officers or bodyguards are often called ‘gorillas’).

Family bonds and motherhood – However, there is another, gentle, kind and nurturing side of these amazing creatures ‘personality’. As we have mentioned, females never have many babies, which is a pretty common case in animal kingdom. Mothers take care of their young ones with love, tenderness and devotion. They even perform a special kind of baby chatter, in order to make their babies feel comfortable.

A dominant silverback would also take care about young ones. He is very supportive to all of little ones in his group and would protect them by all cost.

Little ones are greatly dependant on their mothers until they are about eighteen months old.

These animals build strong family ties and thus represent the value of family love and parenthood.

Intelligence – Gorillas are some of the most intelligent primates. They are able to learn many things, including sign language; some gorillas living in captivity are able to communicate with humans that way. There are scientific researchers who claim these incredible mammals even possess emotional sense very much similar to our own.

They even claim gorillas are able to develop some form of spiritual and religious type of feelings.

Tranquility and peace – This giant animal is not aggressive if there is no threat to itself or its group and youngsters. Most of the time, they are quite, tranquil and peaceful. African tribes identify gorillas with concepts of harmony and peace. Gorillas might appear dangerous, which is true, as well, but they do not waste their energy without a good reason. They could also be kind and loving, which is hard to imagine for a creature of that size and looks.

However, these big apes are peaceful and they value harmony of their group life. They represent fortune, welfare, peace and harmonious life.

Their natural sense of organization and responsibility has very much to do with this fact and spiritual interpretation, as well.

Sociability and unity – Gorillas are extremely social animals that live in groups and develop strong relations within the group. They are organized and function perfect as unit. In a gorillas’ pack, everyone knows its place. That also leaves them time to play and simply enjoy the company of other members.

They represent loyal friendship, devotion to your society and the power of unity.

Gorilla totem people are powerful, strong-willed and determined individuals with a hidden, but inevitable softer side of their personality.

They may appear intimidating and arrogant to others, but the truth is these people are kind-hearted, very polite and gentle towards other.

However, of you do provoke them or hurt someone they care for, you could face their rage in its full strength. These are sociable personalities, with a great sense of responsibility.

Gorilla people have amazing social skills and they feel the most comfortable in a small group of people, but not alone.

They love to organize social events and to spend time with others. They are open and friendly and social situations suit them well.

However, they usually choose the company of few friends with whom they build unbreakable bonds. They are loyal, honest and would always help people in need, no matter if they were their close friends or someone else.

They are intelligent and intuitive, so mean people could never use their sense of compassion and care for their own good.

Gorilla people would always do everything it takes to make their close ones feel loved, comfortable and satisfied.

Gorilla people are hard workers and they love to be a part of a group.

Even if they are likely to be found on leading positions, thanks to their strong will, incredible charisma and motivational skills, they rather will not boast around with their title. T

hey are excellent at organizing big projects, especially if those have to do with social affairs.

Gorilla people use their strength and compassion to help others, but they would rarely seek help for themselves.