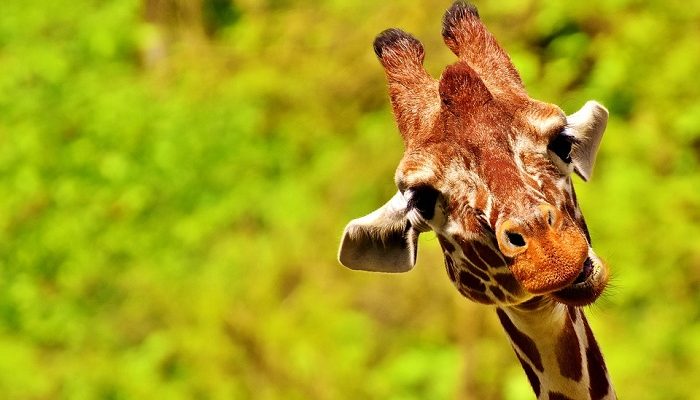 Everyone who has ever seen these tall and gracious creatures must admit how amazing and beautiful they are. Giraffes’ elegant long necks and legs, their slender figure and beautiful eyes make those animals truly remarkable.

The true beauty and magic of giraffes could be seen in vast African savannahs, where they run free and live in harmony with the nature.

Elegant and delicate female giraffes are characterized by smaller body frame and gentle, gracious moves, while larger and stronger males impress by their muscular and tall bodies;

People sometimes think giraffes are clumsy and fragile because of their specific built. However, these magnificent savannah animals are agile, very strong and fast.

They could achieve speed of nearly sixty kilometers per hour and a fully grown up male giraffe could weigh up to almost one and a half tone!

These impressive looking animals inhabit only African continent. It is a true pleasure observing these tender and calm animals. There is a certain kind of magic in giraffes’ faces. You could describe their faces as strange and attractive, even cute and charming! Giraffes have big, sparkling dark eyes and lavish eyelashes.

Eyes of giraffes are magical and attractive. Their curved dark lashes appear as they have make up put on them.

Giraffes have long narrow ears and small furry horns. Their tongues are long and of a characteristic blue color.

When giraffes look across the savannah from the height, they do not look too proud spirited. It seems they oversee vast African plains with a sort of benevolent curiosity.

Since past, giraffes have been highly valued and priced for their beauty and their tender, unaggressive character.

These exotic animals were often given to rulers or other persons of power, as a token of friendship and peace between peoples and nations; 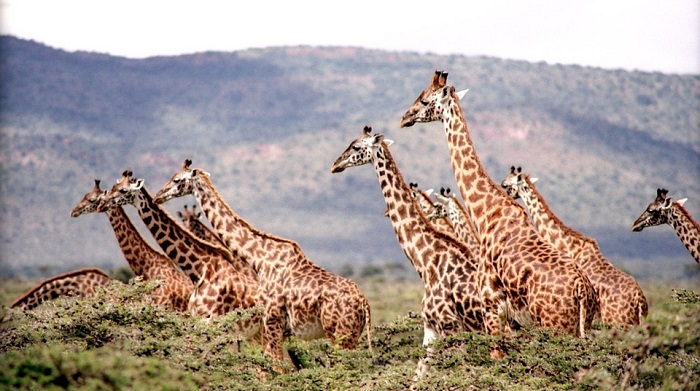 Ancient African stone paintings still testify about the glory and adoration of giraffes. Today, giraffes are known throughout the whole world. Since these amazing creatures inhabit only Africa, people from other continents find them exotic, beautiful, somewhat strange and truly outstanding.

No need to mention fashion industry is quite impressed by amazing giraffes’ fur pattern and it often features it in all sorts of fashion designs.

Giraffes are featured in many interesting stories and legends. People have always been fascinated by their strange appearance and have tried to explain why giraffes look as they do. There are many funny interpretations.

For example, people believed giraffes are some sort of a hybrid created from a union of a camel and a leopard.

‘Camelopard’ was one of the terms referring to giraffes, because people tried to explain their unique appearance as a combination of features of two other remarkable and impressive African creatures, a camel and a leopard;

Another interesting story explains how did giraffes got their long neck. This is the story about young giraffe called Tim and his tree troubles.

It is believed giraffes once had short necks, before this funny accident we will tell you about.

How giraffes got their long necks?

On a hot summer day, giraffes gathered together to play and spend some time in shade of trees. Young giraffes were playing with a ball. Alvin was the naughty one, a young giraffe who loved to make troubles.

He stole the ball from his friend Tim and threw it to the top of the tree, where it got stuck between the branches.

Tim and other giraffes tried to reach the ball. In attempt to get it, Tim’s head and neck got stuck in the branches, just as the ball.

Trying to rescue Tim from the tree, other giraffes pulled his legs, until his neck got freed, but stretched! At first, other giraffes thought Tim’s neck looks too odd, but after they have realized the advantages of it, they all did the same thing on purpose.

Long necks allowed giraffes to get food easily, without jumping, climbing or any other obstacles.

There are other stories about giraffes and most of them describe relations between savannah animals or explain some of giraffes’ appearance characteristic feature.

You could search for them in African folktales and mythology books.

No doubt, people feel pleasant and calm just imagining these magnificent savannah beauties. No wonder giraffes are valued in Feng Shui concept and believed to bring good luck and strengthen bonds of friendship between people.

Symbolic and spiritual interpretations of giraffes are mainly developed on our perception of these animals’ appearance and behavior.

They are large, but gentle and peaceful. Giraffes embody some of the traits and qualities people find the most desirable.

Gentle and delicate giants – Although giraffes are very big and strong, with their heavy muscular bodies, long necks and strong legs, these animals are benevolent. They are never aggressive towards other savannah inhabitants and they are not likely to attack humans or other living creatures.

They would only defend themselves if they are attacked or threatened. Giraffes enjoy eating leaves from treetops and enjoying their harmonious savannah life.

Grace and elegance – Female giraffes are a true sight of grace and elegance. They are smaller and more delicate compared to males and their moves and pace is much more sophisticated. Their slender bodies may appear fragile, but these beauties are also very strong.

Giraffes are gentle giants and they represent softness, grace, elegance and tenderness.

Intuitive and peaceful – People believe giraffes act intuitively, because of their calm and peaceful nature. They do not seem bothered by many things, because they have naturally polished senses and they are able to feel and sense danger much before it comes around.

Giraffes are able to predict danger and escape predator animals that chase them.

Beautiful and remarkable – Long time ago, people from other parts of the world outside Africa had been telling tales about some strange colorful monsters they have seen or heard of. There were sketches and paintings of them and different sorts of evidence, but these outstanding creatures were believed to be half a myth.

However, they were always depicted as amazing, strange, but beautiful creatures.

Benevolent and friendly – As we have said, giraffes are benevolent creatures, unaggressive and tranquil. They show love between one another and take good care about their little ones. They are believed to emit positive spiritual energy and attract good vibrations. Giraffes are symbol of friendship and relations.

Giraffe wooden figurines are commonly placed in people homes or given as present to strengthen friendships and accent good intentions.

Giraffe as totem and spirit animal

From all we know about giraffes’ natural traits and symbolical interpretations, we might assume Giraffe totem is a positive, gentle and benevolent one.

Giraffe people possess many qualities other admire and love, but these also make them vulnerable.

These individuals have gentle and kind hearts and tend to see only good in people around them. Even if their intuition is amazingly strong, they sometimes ‘mask’ the true insight with their ‘pink sunglasses’ life approach.

Giraffe people generally attract good vibrations and positive energy, because their approach to life is simple and benevolent. They are rarely greedy, proud spirited or envious of others. They do not rush and they know things need time to develop. Giraffe people are relaxed and calm.

They usually act intuitively and their instincts would rarely betray them.

However, they sometimes put too much confidence in other peoples’ intentions, so they fail to predict bad outcome of some deals and relationships. They always think good of others, which sometimes could be tricky. Bad people who recognize these traits would often try to exploit Giraffe person’s good will and his or hers readiness to help them.

However, if you listen to your Giraffe inner voice, you’ll know what to do and how to avoid such situations in a way no one gets harmed.

Giraffe individuals are kind and emotional. They love to listen to others, give advices and help. They would rarely seek help from you, but that is because their intuition shows them the right way to solution almost all the time.

These people are lovable and charming and are a very pleasant company. They are devoted lovers, good friends and amazing parents. They tend to lead slow aced, relaxed and harmonious life.

Giraffe people are very friendly and of a simple nature. They rarely express desire for luxurious life or material success, although they might be very successful. They love quiet jobs that do not require much of showing up. That might sound strange, considering giraffes are so outstanding creatures!

Yes, Giraffe people are remarkable and easy to recognize.

They are fashionable and chic, but never in an aggressive way. They impress just by their natural appearance and do not need to put much effort in astounding others.

Actually, they sometimes feel a bit uncomfortable because they catch the spotlight so easily, but are generally unwilling of that.

Well, Giraffe person, you must deal with it, for you are truly an amazing individual!