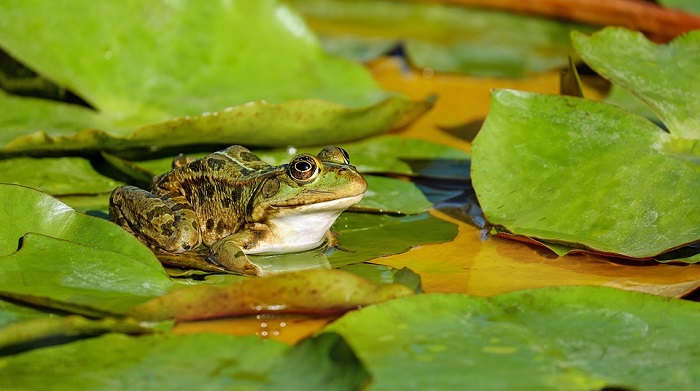 Frog is another member of our spiritual kingdom. This colorful and charming creature represents many things, amongst which one of the most important concepts linked to frogs is the flow of the life itself.

Frogs represent stages of existence, life cycles and transformation. These fascinating animals go through tri vital stadiums of their own existence.

They begin their life as eggs, than are born as tadpoles and after that phase, they develop into fully grown amphibians.

Their life journey, as we might call these stadiums, remind people of the constant change needed for development.

Frog is considered magical and lucky animal, even if there are some very poisonous species.

Mythological depictions of frogs exist in many societies around the world. Frogs have been present as symbolical, magical and divine creatures in traditions and belief systems since ancient times.

Today, frogs are often featured in modern design and used as a motif with similar meanings as old ones. Frog characters are featured in popular culture, cartoons, and children’s books and so on. Frogs have been popular animals since past all the way until contemporary world.

Frogs in tradition and mythology

What does a frog symbolize? Frogs are featured in many great mythological and belief systems. Since these animals are in strong relation with water areas, they are naturally associated with fertility and abundance.

Water is life and frogs are born and live in and near water. For many cultures, frogs are the most powerful symbol of these concepts. They are considered fortune and wealth bringers, they symbolically improve humans’ chances for progeny and secure good, abundant and prosperous life.

Some of the powerful ancient deities were in strong connection with frogs.

Ancient Egyptian goddess of childbirth, Heqet, was often portrayed as a woman with a frog’s head. Roman goddess of fertility and love, beautiful Venus, was sometimes represented by a frog motif; 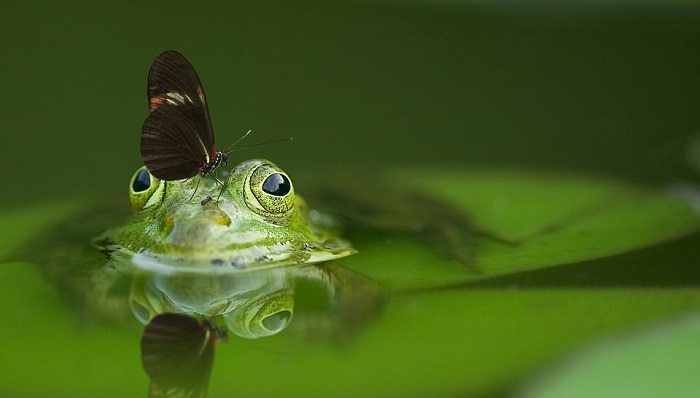 In Celtic tradition, frogs were associated with the earth itself. Moreover, this animal was believed to be the ruler of the Earth.

Since frogs are connected with an element of water, ancient Celts believed these animals possess the power of healing. In traditions around the world, water element is considered life giving and healing, so animals that are tightly bound with it are always believed to possess some extraordinary and positive properties.

Native Americans have associated frogs with rain and they would often call upon them to make it fall and put an end to periods of drought and famine.

Asian people have a special place for frogs in their belief systems. Some Asian societies link frogs to the Underworld; in fact, they believe these little creatures have some magical powers and are able to communicate between realms of Living and Dead.

Little jade frog figurines are commonly placed into moth of the deceased person, in order to secure him or her safe passage to the Other side.

The cult of Ancestors is particularly strong in Asian cultures and frogs play an important role in their rituals. In addition, frogs have many other important meanings for Asians. Let us check them out.

Spiritual meaning of frogs is generally positive in many cultures around the world. Okay, toads may have some different hidden meanings and powers, but we will discuss those later on. Let us learn something about Chinese lucky frog.

Frogs are loved and admired in China and these animals are powerful feng Shui symbol. Chinese believe frogs are lucky animals and fortune bringers. They love to place frog figurines in special parts of their houses, in order to secure well being and prosperity.

Chinese think of frogs as lucky animals, true embodiments of pure Yin energy, which is particularly good for happiness in marriage, family joy and, of course, fertility;

Money frog is one of the most popular Feng Shui symbols. It is a frog shaped figurine, but it has some special characteristics. This money frog has three legs and it is believed to bring wealth, money and joy to people’s homes.

hinese three-legged frog is often considered a primary Feng Shui symbol. What are the powers of Feng Shui money frog and how to use it to attract wealth?

First of all, you should get a three-legged Chinese frog figurine; the best number of these figurines to have is nine, but a single frog should also do well.

You should get at least a single money frog figurine, in order to attract wealth to your home. It is fine to keep them in groups of three or six, but the optimal number is nine;

Lucky frogs for money are to be placed at different spots in your house, on floor. They should be placed in unnoticeable places, such as beneath the table, armchairs, sofa etc. The best arrangement is to direct them so they face different sides of the world.

When you look below your furniture, you should have an impression a group of frogs simply freely came into your home in order to settle down.

If you have a single lucky frog, the figurine should not be positioned so it faces the front door, because it makes the powerful money bringing energy flows out of your home.

If you have three frogs, the best arrangement is to face one figurine outwards, other inwards and the third one however you desire;

In Japan, people have similar interpretations of frog symbolism. In Japanese, term for frog is kaeru. It is interesting that this word is pronounced the same way as term for ‘return’ or ‘to return’, while the kanji (written letter) is different.

Thus, Japanese believe frogs bring good luck and return things or people to places where they belong. Japanese would carry small frog talismans in order to secure safe return from a long journey.

They would also wear frog talismans in their money purses, in order to save money.

Here is an interesting one. You are all familiar with fairytales in which an ugly toad would transform to a beautiful young man, a prince or a noble.

The stories often have something to do with witchcraft and black magic; usually, an evil witch would curse the beautiful young man to remain in a shape of a toad until a love of his life gives him a kiss and thus make him a human again.

Cultural and mythical depictions of toads vary a bit from these children stories, but these unattractive animals have always been associated with magic.

Toad meaning varies depending on a cultural concept. The Chinese three-legged frog is actually a toad, for example.

In Western world, toads are usually associated with alchemy, sorcery and magic. Opposite to interpretations of frog’s symbolism, toads are considered a sort of gullible creatures, because they are larger, fatter, far from being agile and charming as tiny frogs of all shapes, and colors.

Toads are muddy and sticky and they certainly do not look so presentable. However, toads are magical, as well.

Being muddy and more related to ground than water, toads are believed to have some special connection with the element of Earth. They are also associated with dark and wet places, mystical forests and hidden things;

Toads are masters of camouflage and they know how to protect themselves. They symbolize the ability of hiding and transformation. They are always associated with secrets, hidden knowledge and magical realms we do not know.

Those are some of the reasons why toads were used as magical ingredient for sorcery and alchemic works. Ancient belief systems appreciated toads and associated them with gods and the life itself. They have amazing stories that somehow mythological explain why toads are so swollen.

Let us summarize these inspiring interpretations of frog symbolism. Talking about general spiritual meaning of frogs, we could enlists several main characteristics and ideas associated with them.

Transformation and life cycles – As we have seen, most cultures honor frogs because these animals are associated with the great circle of life we all experience. Frogs’ lives go through firmly determined stages that are in harmony with nature. That is something people find fascinating and symbolically powerful.

Fertility and healing – Frogs have always been associated with fertility, childbirth, wealth and abundance, the basics of a happy and prosperous life. Frogs represent family joy and prosperity. Many cultures believe frog talismans would help them have children and have a long and joyful life within a large family.

Frogs also represent vitality and longevity, since they are connected to the Water element, healing and purifying.

Resourcefulness – Frogs have good eyesight and they are able to make amazing jumps. That makes them skilful, fast and not so easy to catch. They know how to deal with obstacles, even being so small and soft. Tads do not jump so agile and certainly do not represent graceful runner.

However, they have other ways to protect themselves. They know how to blend into environment and hide in dark, mysterious places.

Luck and wealth – For some reasons, frogs are often seen magical and fortune bringing animals., Frog talismans and figurines have been used all around the world in order to attract fortune and money to our homes. Frogs symbolize prosperity, abundance and material wealth.

Frogs and toads are interesting totem animals. Frog totem teaches you to use your intuition, your senses and skill in order to advance in your life.

Frog people are gentle and kind and they have strong empathy. These people are friendly and nor judging.

They have the will of their own, but would always listen to others.

Frog people are sensitive and they love to make friends. They are very sociable and always know how to act in different social situations.

They feel at ease in a large group of people and love to engage with creative projects. Frog people love to talk and exchange experiences with others. They like to share what they know about the world, but they also gather information from others.

Frog people are somewhat unsteady. They are adventurers and travelers. It is hard to keep them in one place.

Frog individuals often find it hard to commit to someone or to dedicate their efforts to a single task. They love to explore different things in life, which could be amazing and devastating at the same time.

Just try to focus yourself a bit more and you will do great.

As a Frog person, you have amazing charisma and you are naturally lucky. Frog people generally attract positive people and good things to their life. When faced with troubles, they sometimes try to avoid them, rather than solve the problem.

However, they are able to overcome obstacles, because they are adaptable to changes and different circumstances.

Frog persons are great parents and they love to live in large families. They are able to provide excellent living conditions to their family, they love and nurture their kids and make sure to provide them everything needed for a happy childhood and future life.

Frog people’s kids are usually adventurous, kind and aware of the world around them. Frog people are always fun to be around.