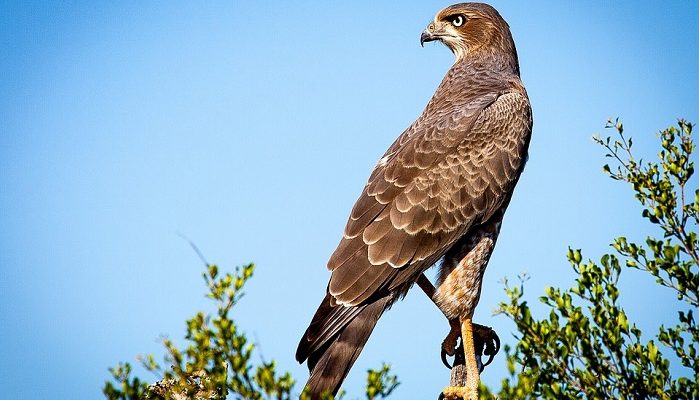 Falcon’s flight, its tranquil, perfect flow over the skies is the sight that has been fascinating, enchanting and inspired humans for centuries.

This beautiful and elegant bird has always been a symbol of unrestrained freedom, liberty, pride and invincibility.

In addition, falcons have been representing success, achievement and the power of raising yourself above the circumstances with noble heart, honesty and wisdom.

Thus, it is not strange some of the mightiest and the most glorious empires had been using falcons’ motifs to represent royalty, glory and divinity.

Falcons have been representing some of the highest and the most noble values people admire and adore, since far past until modern times;

In antiquity, falcon motifs were regularly used as royal and godlike symbols. For example, in Ancient Egypt and ancient Nordic mythology.

In modern times, falcons are still perceived amazing, beautiful, proud and skilful birds, so many brands and companies use its motif to accent their own capabilities and values they express.

For example, there are aircraft products associated with these incredible sky predators.

Falcons were one of the most glorious royalty and divine motifs in ancient times, while in modern days, falcon motifs are used to accent values and traits characteristic to falcons, which companies (organizations, brand and so on) identify with;

Egyptians had a special admiration for falcons. They thought of this beautiful bird as divine and powerful mythical creature and they identified falcons with their gods.

One of the most beloved and worshiped Egyptian deities, Horus, the sun god, was usually portrayed as a man with a head of a falcon. 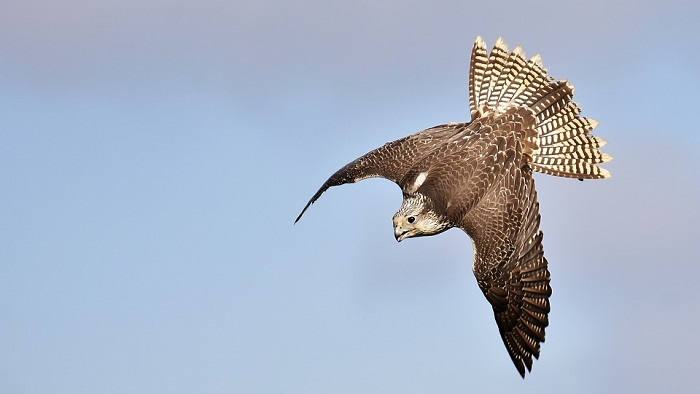 In addition, falcon motif was used to represent Horus himself.

Egyptian hieroglyphs often feature a falcon pictogram, written in order to describe some of the greatest qualities, concepts, ideas and terms people can think of.

Falcon pictogram can be seen in hieroglyphic pictogram constructions for a god, a pharaoh, a ruler, stars, moments in time, prayers and blessings, the Earth, the World, a year and skies.

As a representation of the mighty Horus, falcons were also associated with the sun itself, glory and power.

One of the most powerful Egyptian divine symbols, The Eye of Horus, was represented as a picture of eyes and stylized face of a falcon. The single eye motif also reminds of a falcon’s eye;

Ancient Egyptian believed falcons were in tight connection with sun deities. Beside Horus, they also identified falcons with another, even mightiest god, Amon Ra, the supreme sun deity of Ancient Egypt.

Ra is also described and portrayed as a man with a falcon’s head.

Since Egyptians believed a pharaoh was a godlike, powerful being, falcons were also considered royal birds and symbols of pharaohs’ might, supreme rule, glory and power.

Ancient Egyptians believed pharaohs are Horus’s incarnation on Earth, so they would often portray their rulers with a falcon’s head, as well.

Also, during the era of first pharaohs’ dynasties, the path of a ruler’s ascending to the throne was known by the title of ‘a falcon’s flight’;

It was believed falcons bring salvation to those who suffer any sort of imprisonment, including morally, emotional or spiritual oppression, produced by either himself or herself or someone else.

In European mythologies, falcons were associated with deities, just as they were in Ancient Egypt;

For example, Germanic traditions identified falcons with supreme sky god. In Nordic mythology, Freya, the goddess of love, fertility and sexuality and guardian of the dead, was also associated with falcon.

Nordic legends tell Freya was wearing a cloak made of falcons’ feathers, which had been helping her to travel between Nordic mythological realms.

Sometimes, she would also take the form of a falcon.

The peregrine falcon is the most numerous and probably the most beautiful representative of falcon birds’ genus.

This amazing flying predator lives all around the world; it is usually known simply as a ‘peregrine’ and as ‘duck hawk’ (only in North America).

It is a large bird, with characteristic bluish and grey feathers on its back, and white stripped under parts, with dark feathers on head.

Because of colors of its feathers, in some eastern European countries it is known as a ‘grey falcon’.

Peregrine falcon is the fastest flying bird on our planet, a characteristic for which this impressive creature is especially admired and favored as a hunting bird.

Some research data suggest it could achieve speed up to almost 400 km per hour;

No wonder this amazing bird has been inspiring legends, beliefs and admiration for ages. It is probably the most loved and admired falconry specie, with a falconry ‘career’ lasting for about three millenniums or even more!

Peregrines are easy to train and they express incredible readiness to hunt. Because of so long use in falconry, peregrines had become endangered species over time and law in many areas of the world protects them.

Just as falcons in other mythologies are associated with sky and sky deities, peregrine falcons are believed to be spiritual beings in connection with sun and sky, light and a higher order of things.

Falcon as spirit animals was particularly important to tribes of Pascagoula, Cahokia, Choctaw and Chickasaw.

Mississippian Indians believe peregrines have special, supernatural powers and that the bird is able to travel between heavens and earth, carrying messages from forces that reside in the upper world and look over the people.

They believed in a mythological character of a Birdman, which was portrayed in a form of a peregrine falcon. Native Americans believed birdman peregrine protects our world from evil spirits of the underworld.

Peregrine falcon was a powerful warfare symbol for Native Americans. They believed it would bring them luck and victory;

They performed dance ceremonies in which participants would wear falcons’ feathers, winged costumes and masks resembling the bird.

They believed such ritual could help them get in touch with the realm of good spirits and help them absorb powers form the mighty peregrine falcon.

Some archaeological findings suggest how much Native Americans had worshiped the peregrine. Burial beds of their chieftains were shaped in a form of the bird (those were made out off shell beads).

It is a self-serving unscrupulous person.

A ‘blue falcon’ doesn’t care about his peers at all, it is an individual who promotes only themselves and show no regard neither for his company nor for the mission the person is engaged with.

In American military slang, it is a notorious title no one would like to get. However, some people really do not give a damn about being notorious.

There are several quite well known ‘blue falcons’ in US Armed Forces history. Why this expression is associated with such an amazing creature is not clear.

Let us move on to spiritual meaning of falcons and try to find out what totem powers these extraordinary flying predators possess.

Falcon symbolism is based upon all of those mythical conceptions and traditional beliefs about these birds.

If we summarize these interpretations, we could easily conclude falcons represent many positive concepts and ideas. As a spirit animal, it is a powerful symbol.

Falcon symbolism is old and rich, as we have seen. This flying fellow is associated primarily with sky and heavens, upper world, higher thoughts, liberty, free spirit, victory and glory;

Falcons have always been associated with power of the sun and celestial energies, in general. They are believed to be messengers of the heavens and good, guiding and guardian spirits.

Falcons also represent warfare, hunt and victory on the battlefield. Let us explain some of the concepts associated with falcon spirit and then move on to falcon totem people.

Speed and skill – This one is quite obvious, considering falcons are some of the fastest flying animals on our planet.

However, their speed, incredible hunting efficiency and skills could be interpreted as great spiritual potential as well. Not only these birds are true masters of speed flight, but this type of speed could also be associated with the flow of our thoughts.

Falcons represent not only physical speed, but also the one of our brain. This bird brings inspiration, creativity and makes our imagination alive. Its flight through the skies is often identified with the flight of thoughts through abstract realms of conscious and unconscious.

It also represents the flow of emotions, creation, mastering the life and an ultimate observance.

Victory and fortune – As we have mentioned, falcons have been representing concepts such as victory and success since antiquity. This bird is an ultimate symbol for liberty and victory and it is believed a sight of a falcon always means good news. If you, for example, dream about a falcon it could mean the success is coming up your way.

Falcons are seen as fortunate spirits, the ones that bring glory, power and success, but pure and intact.

They represent justice, honor and nobility. Victories falcons inspire are always clean of any trickery or deceit.

Spirituality and forces of divine – Falcons are commonly believed to be able to travel between the worlds of reality and spiritual worlds. They had been seen messengers of gods in many influential mythologies around the world.

People have always been fascinated by falcon’s elegant and yet dangerous flight. It something completely unreachable to humans and, thus, even more impressive.

Falcon’s flight really appears divine. A falcon is able to reach the height we could only dream off and look down to the world from a great distance with its sharp eyes.

Spiritually, this is identified with flight through realms beyond our imagination. Falcons represent that connection.

They create bonds between world of humans and realms of gods.

Higher knowledge and wisdom – Falcons are associated with wisdom and higher knowledge because they are generally identified with skies, heavens, the sun, moon, and all things out our reach.

Great wisdom is achieved by patience, observance and tranquility, but also with great skill and passion. Falcons embody all of these concepts.

We are in search for higher knowledge and spiritual people often call for powerful totem animals to guide them on such a journey.

A falcon is probably the best choice, because of its divine flight, a connection to heavens and forces of celestial spirits and gods.

It seems almost everything is said about the incredible Falcon spirit. This impressive creature amazes as a totem animal, as well.

It will help you get to know yourself better and understand the world around.

Falcon people are honest and confident individual many look up too. They simply shine and emit positive energy.

They are loners, but that does not bother them at all, on the contrary. They are noble and ready to help if they are asked to. These people are highly intelligent and skilful in many professions and fields of interest.

They have deep insight about themselves and are able to make great success in life in any field they desire.

They are loyal, honorable and easy going. Falcon people are patient and observant, rarely anxious or afraid of doing something new.

However, they rarely rush into thing, even if they are fast thinking.

They calculate, evaluate and perceive things and people around with an astounding precision.