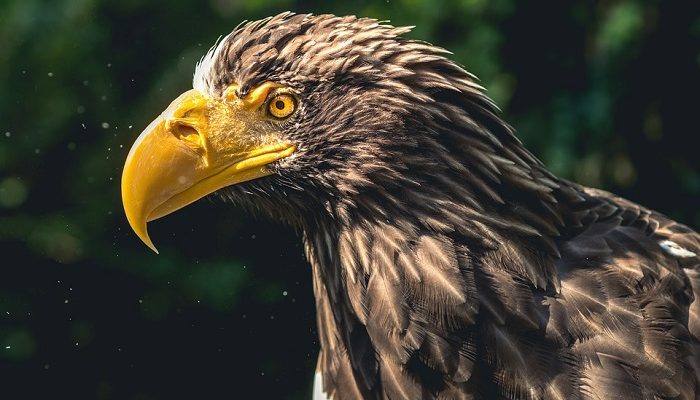 Supreme ruler of the skies, the Eagle, has always been known as universal symbol of freedom, unlimited heights, inspiration and ideas of the highest and not so easily reachable values we all strive to touch even just for a moment.

The very sight of this magnificent bird and its immense, grandiose wings and proud eyes makes us feel excited and wakes in us a flame of unrestrained spirit.

It drives our imagination and spirit up, waking our enthusiasm for life, keeping us motivated, determined and ready to step into new and unexplored corners of both the world we live in and the realm within our own souls, minds and bodies.

The Eagle inspires us to reach for things that sometimes seem so distant and it gives us courage to move on. It symbolizes the purest form of freedom and independence.

Eagles remind us of free spirited authority. This large, glorious bird embodies the concept of natural leadership and respect. Who would dare to face this strong, wonderful and merciless sky hunter?

Eagles rule the skies with a natural authority; when they fly over the land, it seems all the heavens are in eagles’ possession.

Because of eagles glorious appearance and proud, naturally authoritative behavior, these birds are one of the most used motifs in heraldic art.

There are many countries, both historical and modern, featuring eagle motif on their banners, flags and coats of arms.

Symbolic use of eagle motifs

History of using eagle or its relatives’ motif in heraldry is long. The falcon was associated with Horus in Ancient Egypt, eagle motif is featured on Ancient Persian king Cyrus’s battle standard, Islamic prophet Muhammad’s Black banner was known as the Banner of the eagle (even though it was solid black!).

In Christian tradition, an eagle is seen on thousands of standards and this bird has been traditionally associated with Evangelists.

Eagles have always been associated with Sun, glory, victory and heights. It is strongly linked to concepts of deity, warrior, kings and rulers. 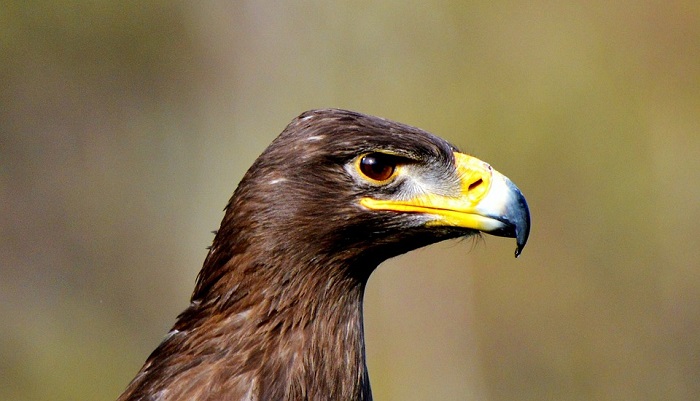 An eagle motif is probably one of the most popular heraldic symbols. It is found on coats of arms of many countries, since historical times, until present day;

Eagles are predatory, merciless birds, but they are usually considered one of the most positive animal symbols.

In Christian tradition, eagles have always been admired for their strength, speed, beauty and intelligence.

Eagles are generally respected or even worshiped in most of the human societies, since far past until modern days.

This beautiful bird has a prominent place in some of the greatest mythological concepts, such as Slavic mythology, many eastern belief systems, Ancient Greek and Roman culture, but also in Mayan, North American Indians traditions and other cultures and societies all over the world. Its significance is historical and it still lives on, in contemporary symbolism.

Born to rule over skies, an eagle is a powerful spirit animal. Apart from main concepts mentioned above, an eagle motif also stands for dignity, honor, dominance, strength focus and determination.

It is believed eagles possess amazing spiritual energy, for which they are admired and adored by shamanic cultures.

Experienced shamans would likely shape-shift their minds with an eagle, in order to reach the heights and insights unknown and unreachable to a common human.

Eagles represent unleashed force, unrestrained spirit, relief and freedom. They embody the idea of total liberation from all earthly shackles and bonds. In spiritual sense, that is one of the highly admired values, because humanity always seeks for things out of our reach and strives to achieve perfection, no matter of being conscious that perfection is impossible.

It is a powerful force that moves us forward and eagles, as incredible spirit guides, give as an example of the purest possible spiritual liberation.

Eagles have an amazing vision, another trait for which we praise them so much. Eagles are considered visionaries that foretell changes and induce creativity.

As a spirit animal, an eagle reminds us to rely on our own resources and always stay true to ourselves.

Ambition – Eagles represent ambition. They are determined and focused. Eagles rule over skies and remind us miracles happen, if we keep to our cause and never give up. Sometimes, this force is so strong it could be destructive to humans.

This amazing flying creature is divine to humans, because it is able to reach heights beyond our imagination. Eagles represent determination and courage, but in a productive and creative way.

This powerful symbol reminds us to keep to our own ideas and to dedicate all our efforts to achieving success in aspects of life we find most important.

Eagles chase away negative energy and help us feel positive vibrations around us. They help us absorb life energy and channel it properly.

An eagle motif is commonly found on historical standards, but for the same reason, it is also featured on many contemporary logos.

Many contemporary companies would use an eagle motif featured on their logos, to express their ambition and the will and determination to develop;

Freedom – An eagle motif is probably the most commonly used symbol for freedom. This magnificent bird is a skilful and agile sky hunter that rarely gets in trouble. It does not have many natural enemies, because it is fierce and strong.

Above all, eagles freely fly over the skies and amaze us by their glorious appearance. If you have ever seen an eagle in the wild or heard its call, that is probably an experience you will remember your whole life.

Not only eagles symbolize freedom, a characteristic for which they are adored and commonly used as a motif to accent a firm determination to stay independent (for example, using an eagle motif on different countries’ standards), but it also inspires liberation.

In spiritual sense, eagles inspire us to let go of things that drag us backwards, to trust our intuition and courageously step into new chapters of our destiny.

Being free in all aspects of our existence is a value of the highest importance, both for an individual and societies.

The most popular example of using an eagle motif as a symbol of freedom is probably the United States of America eagle;

Authority – Eagles represent firm, proud and inspiring authority. They symbolize total, but unforced rule, because it is their natural mode of existence. They are born to rule the heights, so it is logical to consider eagles powerful spiritual embodiment of the concept of authority.

Eagles represent charismatic, pure minded leadership, honor and justice. That is the main reason why eagles are the most common heraldic motifs.

They stand for royalty and nobility, knightly values, glory and victory.

Eagle motifs are to be found on numerous independent countries flags, because they symbolize authority, freedom and honor, some of the values that people respect.

It is a way to show you are a powerful, but a just ruler. Another good example is use of eagle motifs and talismans in Native American folklore.

Native American tribes’ chieftains are commonly portrayed with an eagle headdress that stands as a crown. It represents their strength and determined will, their just rule, their nobility and honor.

One of the best examples of using an eagle motif to express authority values is Native American chieftains magnificent headdress;

Bravery – Eagles represent courage and bravery. It is also the reason why this motif is so popular in heraldic. On the other side, it is very important in spiritual sense and on a personal level. Eagles inspire us to take charge of the situation and channel life energy we all possess.

They symbolize total liberation, letting go of our earthly boundaries and fears. Eagles teach us to be self confident and self-reliant, to let go of our fears and all the negative energy and be brave.

Eagles fly in a relaxed manner and it seems it is so easy. They are aware of their power and free to fly higher and higher. In spiritual sense, they represent constant development for which courage is of a vital importance.

There is no moving forward without catching up with our worst fears and overcoming them.

Eagle’s inspirational message to us says: fly high and demand more, be brave and do not let your fears restrain you.

Eagle as totem and spirit animal

Eagle totem is influential and extremely strong, because spiritual force this animal possesses is immense. If you are born under the totem of Eagle, you have very positive destiny guidance, but you have to be aware of the risks that come with ‘the package’.

Eagle people are proud, honest persons with great authority. They literally shine and catch eyes of everyone around.

They are easy to listen and follow, because their style and the manner of speech is attractive, firm and reasonable.

These people are loyal, trustworthy and noble individuals, but sometimes they are hard to deal with. Eagle people are:

People guided by Eagle totem are extraordinary individuals who easily win other people’s hearts and respect. They are great leaders and often prove themselves good at some prominent job positions.

It is natural for them to inspire and lead others and they do that with no effort at all. Everything seems to be easy for eagle persons, because their character is firm and determined.

They always know what they want and what is not good for them. Just as eagles are able to reach heights beyond our imagining, eagle personalities have a gift of great insight and amazing intuition.

You cannot smart them out, because they already know what you are up to. Eagle people are usually very intelligent and wise.

Their ability to stay focused on their goals makes them successful in many aspects of their lives. They will not give up until they try everything they could think of or exhaust all of their resources.

These people are good to have in company or as team members. They are trustworthy and loyal friends, supportive family members and passionate lovers, although sometimes they might appear cold and reserved.

It is not easy to win their respect, because they have high standards and are demanding in every sense.

However, their qualities could sometimes turn bad.

Eagle people are so confident that it sometimes makes them insensitive and too proud spirited. They rely on themselves in all aspects of life, but generally always listen to advices and think about them.

However, sometimes they would completely exclude other people from their own personal realm. They hardly become unsociable, they rather tend to outshine everyone else by their natural charisma, to the point they get lost in their narcissism.

Eagle people are ambitious, courageous and determined, which qualities to be proud of are.

However, they could be too intense from time to time. It could harm others, as well as bring misfortune to themselves. Their determination and demanding nature make them forget about their own limitations.

Eagle personas could become so obsessed with their ambitions and work, that they forget to sleep or eat, without even noticing what harm they are doping to their bodies and minds.

It could come from either positive (such as inspiration, desire to make better results or create wonderful things) or negative driving force (such as anger or unbearable sadness).

If you are an Eagle person, you are certainly an individual others respect and love. Nurture your qualities, but stay within your own borders.

You should try new things, of course, just be wise when evaluating pros and cons of different circumstances you find yourself in.