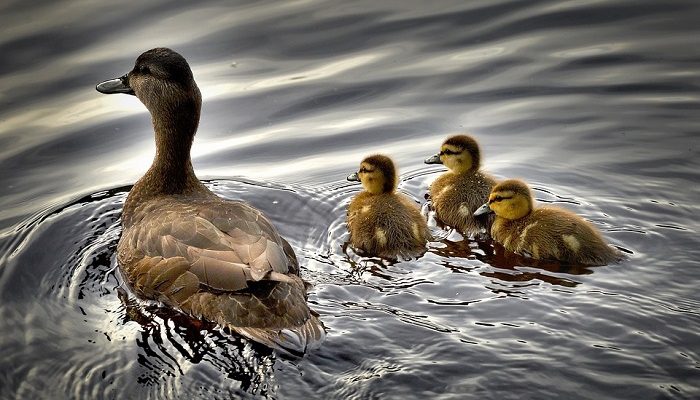 Ducks symbolize many things. These birds are connected with the spiritual world by many bonds. Because of their various capabilities, ducks are believed to be able to travel between the realms of spiritual forces and the world of our reality.

It is believed they can communicate between the physical universe and the mystical spiritual spheres.

Ducks are able to both fly and swim and so their skills represent those concepts mentioned.

A flying duck is associated with spiritual freedom and the swimming one represents the realm of unconsciousness;

Ducks are highly valued and admired by people, for their many characteristics.

Okay, we eat their nutritious meat, their eggs, we use duck fat and feathers and so on. Not only this bird is useful to people, but it also possess characteristics that make ducks extraordinary, magical and very symbolic creatures.

Mandarin lucky ducks are one of good examples of these birds’ spiritual powers, for instance.

Ducks can walk, fly and swim, so, logically, they represent great flexibility and resourcefulness.

Ducks in folklore and tradition

Ducks have been popular animals amongst humans, since past. You could see depictions of wild ducks on ancient frescos and mosaics, for example. There are many species of ducks; some of them are wild animals and others are domesticated.

Domesticated, barnyard ducks are as popular as chickens and geese, all around the world. Duck’s symbolism varies depending on particular traditional system, but these birds are present in folktales and legends around the globe.

Ducks are popular spiritual creatures amongst many Native American tribes, such as Lakota Indians. They are usually portrayed as curious, foolish and not so intelligent beings. Popular culture cartoon and comic books’ duck characters reflect these traits. Just think of funny Donald and Daffy Duck; 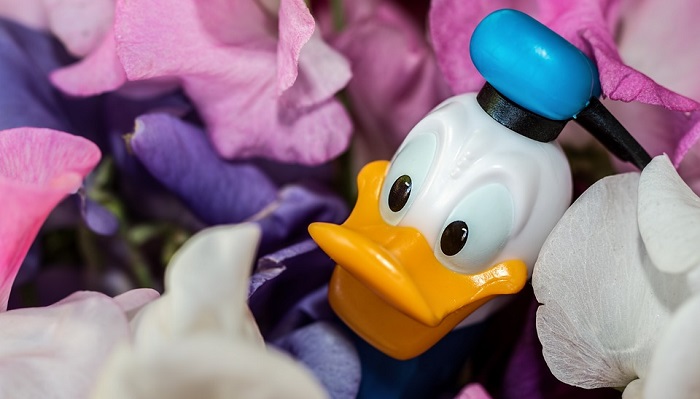 On the other hand, some other societies believe ducks are smart, resilient and cheerful fellows. Ojibwe Indian story tells about ducks’ ability to survive hard times and look at the world with joy and grace. These folktales tell about ducks’ symbolical persistence and patience.

Moreover, ducks in Ojibwe tales carry a strong message: benevolence beats evil. A duck character from one of their stories refused to view its enemies as enemies, until they gave up on trying harming it;

There are numerous superstitions about ducks’ appearance and behavior. Many of these birds’ actions are interpreted as omens. Let us mention few interesting ones.

Quack of wild ducks is a good sign. It announces the period of wealth and luck is about to start;

Seeing a flying (wild) duck symbolizes relief of bad feelings and troubles. If you see a flying duck, it means your problems and worries are soon to be gone or resolved;

Hearing very loud wild ducks call is a sign the rain is about to fall;

Unusually dark duck eggs suggest bad things are about to happen. Such eggs represent misfortune and failure. A duck that laid such eggs should be killed in order to prevent these;

Mandarin duck figurines are used in order to promote harmonization of already established love relations and to attract luck and love. It is believed these cute birds could heal broken hearts, resolve marriage issues and bring joy and fortune once again.

People who are single could use Mandarin ducks in order to attract luck in love and a possible life partner.

Feng Shui symbolism of mandarin ducks originates from the fact these animals are extremely monogamous. Once they are sexually developed and grown up, they would chose the partner whom they will spend the rest of their life with;

These cute birds are devoted partners and caring parents. Both male and female Mandarin ducks take good care of their little ones and they live in a family unit until they die. They symbolize devotion, passion, love, parenthood, happy marriage, family joy and so on.

Feng Shui Mandarin ducks figurines are usually designed as a pair of these birds, a male and a female, playing in the water. They represent the perfect relationship and joyful marriage;

The best position to place Mandarin ducks figurines is to put them in southwestern part of your home. You could also use Mandarin duck painting or picture, not only figurines.

The same position is good for both single people and couples. If there are some problems in marriage, the best position is the northwest (if the husband is the one to blame for the troubles).

Ducks lives all around the world and are closely related to people. There are several of species, but the basic characteristics of ducks are similar, either if we talk about wild or domesticated birds. They may represent many things and duck motifs or characters are present in both traditional and popular culture.

Sociability and friendliness – Duck are sociable and calm birds. They live in flocks and groups, which is a significant mark of ducks’ existence.

They do not like to be alone and it is a rare sight to see. Ducks are generally benevolent and relaxed. They are friendly towards one another and they do not attack other creatures.

As other animals, ducks are protective of their little ones, so the only situation they could get aggressive is if they feel their young ones are threatened or endangered.

Freedom and flexibility – A flying duck symbolizes freedom. For example, if you dream about a flying duck or, even better, a duck that flies away from somewhere, such dreams represent a person’s own desires to break the bonds and be free. In some cases, it could also suggests the need for breaking the rules that make you feel imprisoned or restrained and unable to achieve your goals and advance in life.

Ducks are extremely adaptable and flexible living beings, because they are familiar with three of the main elements. They are comfortable in water, on the ground and in the air.

Not only they represent the balance between those, but also they symbolically connect Earth and heavens. It is believed ducks travel between the astral and the material world.

Deceit and lies – It interesting that white ducks are not always believed to be embodiments of goodness, purity and innocence. In some societies, white ducks represent lust, lies and deceit, even greed. On dreams, it suggests your lover might cheat on you or someone you consider your friend lies to you.

Maybe some people from your environment try to take advantage on your behalf or they want to exploit you and betray you.

Happiness and fortune – In Asian cultures, as we have already mentioned, ducks symbolize good luck and fortune, especially within the family. Mandarin ducks are popular marriage talismans and they symbolize happiness in marriage, fidelity and love.

A pair of Mandarin duck figurines is a powerful Feng Shui symbol. They are often included in wedding apparel.

Duck as totem and spirit animal

Duck totem is positive, but sometimes a silly one. Duck people are generally cheerful and friendly individuals that love to socialize and have fun with their friends.

They are openhearted and simple, which could be tricky in some cases. They could be smart, funny and outgoing individuals people love to be around.

Duck people just hate to be left alone. They love to hang out with different people; they know many people and usually have many friends. They like to talk about different subjects and they could have many interests.

However, they would rather choose light and funny themes over problematic philosophical debates. They do not want to worry in advance, which makes them good company. They have a positive attitude towards life.

Duck people are generous and kind to others. They sometimes act foolish if they want to show their love and devotion to (possible) partner.

Sometimes, people find them shallow or even stupid. The truth is duck people are simple and they love to enjoy all the positive aspects of life. This trait could be both good and bad for them.

They could deceive themselves by their ‘pink glasses’ perspective. However, their positive attitude attracts positive energy.

These people are sensitive and love to help other people. Their vulnerability and anxiousness are present if they are alone. They feel safe and secure if they are in the group of people, if they have a large family or are a part of some collective. They believe in the power of unity and are great team members.

They have their own will and mind, but are likely to make compromises.

Generally, duck people are laidback. They avoid stress and dramatic situations above all costs. This could be bad, because it makes them also avoid problems and issues that need to be resolved in order to advance and move on.

They ‘fly away’ from problems. They would rather step back than to show weakness or somehow hurt others.

People born under Duck totem are communicative and natural born spokespersons. Jobs that require many words to be said or written are perfect for them, their positivity and entertaining nature makes them inspirational and charismatic figures.

People love to listen to them and often find themselves moved by a duck person’s speech.

Not only these individuals know how to use words and give advices, but also they are careful listeners and supportive fellows.