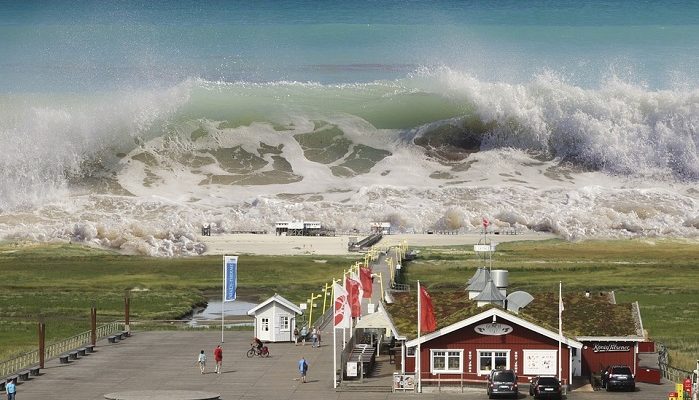 Tsunamis are a natural phenomenon and proof of the unimaginable power of nature, which consist of a series of waves in a body of water.

They can be caused by earthquakes, underwater eruptions or volcanic eruptions, meteorite impacts, and similar happenings below or above water powerful enough to create a tsunami.

They look like a fast rising tide, and can reach heights of up to 30 meters. Tsunamis usually affect the coastline, but sometimes they can affect the whole ocean basin. The power of a tsunami can be incredibly destructive.

Dreams about tsunamis and other huge waves, are very disturbing dreams. Surprisingly, these dreams are quite common.

Usually when you have such a dream, you observe the wave approaching from the shore or from some place facing the water. These dreams can really fill you with panic and fear.

Water is a symbol of our feelings and emotions, and tsunamis might indicate them getting out of control and overwhelming us.

Tsunamis often appear in our dreams during periods of pressure and stress or during major life changes.

They usually indicate feeling overwhelmed and fearing our abilities to cope with the circumstances. If the pressure lasts a long time, these dreams might be recurring, as the anxiety and the stress level rise.

The details of a dream about a tsunami are very important, especially the size of the wave and the location, as well as the people possibly present in your dream.

These dreams are a reminder to address the issues which are stressing us and deal with them as soon as possible, to restore balance in our lives. These issues are usually the things and situations in our lives we avoid confronting.

Often tsunamis in dreams reveal feelings of emotional devastation caused by some undesired and unexpected events. Sometimes they encourage us to confront these feelings and deal with them.

In some cases dreams about tsunamis might appear at the beginning of our relationship with someone we have strong emotions for, and we feel overwhelmed by them. They can also indicate inner changes happening inside our personality. 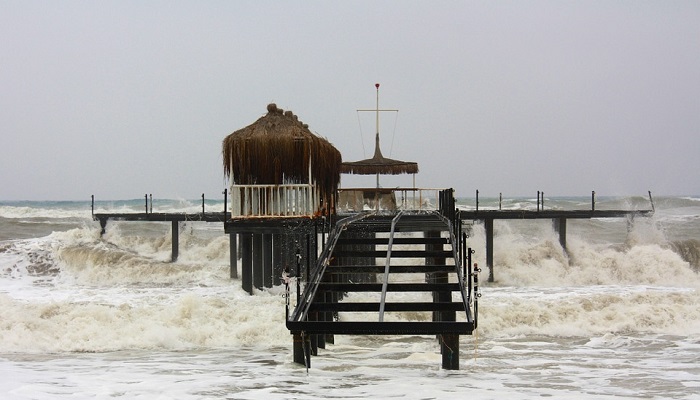 These dreams can also be a sign we need to confront our repressed emotions and feelings.

A tsunami in a dream might indicate some major changes happening inside you. Maybe your dream indicates your adaptation process to some huge personal changes you might be undergoing.

It might also indicate changing most of your beliefs and life structure, which you had for many years. It is a message to accept these changes, because they are for your highest good.

People who are depressed often dream about tsunamis, as well as people who are currently on a spiritual path.

These dreams might reveal the undergoing process of cleansing and releasing their past memories and hurts, so they can free themselves.

Sometimes dreams about tsunamis relate to the people who surround us and their destructive and disturbing emotional and physical impact on our lives.

Dreams about a tsunami often indicate feeling overwhelmed in some part of your life, usually regarding your finances or romantic life.

The size of the waves, demonstrates the level of stress you are feeling and the impact your current life circumstances have on your life.

Dreams about tsunamis bring a message that all circumstances in life can be changed, but sometimes the process of change can be rather destructive.

Although you might suffer a bit while the process lasts, you will feel relieved at the end, and be ready to start something anew.

Dreams about tsunamis sometimes reveal certain troubled life situations or imbalance, which are a threat to your emotional stability.

Maybe you are going through an emotional drama for some reason. Maybe you are burdened by some obstacles or some unwanted changes.

Sometimes these dreams might be caused by major life changing events, like a separation, divorce, financial loss, serious illness, or some sudden changes and unstoppable events you are not able to cope with easily.

These dreams can sometimes indicate your exaggerated reactions to some situations and hasty conclusions about some things being more serious and difficult, than they actually are.

Dreams About Tsunamis – Meaning and Interpretation

Dreaming about seeing a tsunami. If you saw a tsunami in your dream, such dream might indicate being overwhelmed by your repressed feelings and emotions, which might be searching their way out.

This dream might indicate experiencing emotional instability and sadness in some life situation.

If you dreamed about being a witness of a tsunami fury, such dream might also indicate taking part in some social turmoil and unrest. The impact of those events in your life might be determined by the closeness of the tsunami in your dream.

Dreaming about a rising tsunami. If you observed a tsunami wave rising in your dream, such dream might signify your repressed emotions and feelings.

Maybe it indicates your emotional instability and unhappiness.

Dreaming about a sudden tsunami wave. If you dreamed about a tsunami wave coming out of nowhere and surprising you, such dream might represent some major events in your life, which provoked this dream.

Maybe something unexpectedly happened and had a major impact on your life. These events can usually be related to something very important in your life, which doesn’t affect you directly, such as the death of a close friend, but emotionally hurts you.

Dreaming about a tsunami passing. If you observed a tsunami passing in your dream, such dream is usually an indication of major changes happening soon in your life. That can be changes in your private, as well as your professional life, which you have been waiting for some time.

Although these changes might come in an unexpected moment, you will soon realize they will be beneficial for your future life progress and happily embrace them.

These problems will most likely be some conflicts and arguments with some of them, but you should try to stay calm and don’t allow misunderstandings to ruin the relationships you have with them.

Dreaming about being submerged under water by a tsunami wave. If you dreamed about a tsunami submerging you completely under water, causing you to suffocate, such dream might indicate the need to confront your feelings and emotions, instead of escaping them.

This dream might also indicate a new beginning in your life, after some changes are over.

Sometimes it indicates giving up on old ways of living or old beliefs, so you can make a better ground for new things to come.

This dream usually indicates not being afraid of any changes that might happen.

It can also indicate your efforts to solve some problems.

Sometimes it can indicate using some negative situation as an advantage.

This dream might also indicate not being able to suppress the negative feelings you have accumulated.

Such dream might also indicate confronting an emotional turmoil, which you will successfully overcome.

Dreaming about someone affected by a tsunami. If you dreamed about someone you know being a victim of a tsunami, such dream might not be a good omen regarding that person. This dream might forewarn a difficult period in this person’s life approaching.

This dream possibly indicates the need to finally confront a health issue you have been denying and ignoring for a long time, which has now grown out of proportion, asking for an immediate reaction from you.

Sometimes this dream can indicate someone close to you, like a family member or a friend, encountering some health issues in the near future.

Maybe they tend to ignore their health problems, so it’s up to you to convince them to take the necessary measures to deal with these issues in a timely manner.

Dreaming about a tsunami covering a city. If you dreamed about observing a tsunami wave covering an entire city, such dream might represent your emotions and feelings about life in general.

This dream might also indicate feeling isolated from others.

Dreaming about causing a tsunami. If you dreamed about creating or somehow controlling a tsunami, such dream might signify your ability to control your feelings and emotions.

Maybe this dream indicates being able to control other people’s feelings and emotions.

This dream can sometimes indicate your plans to make some major changes in your private life or your business, which might affect some people, like your family members or workers.