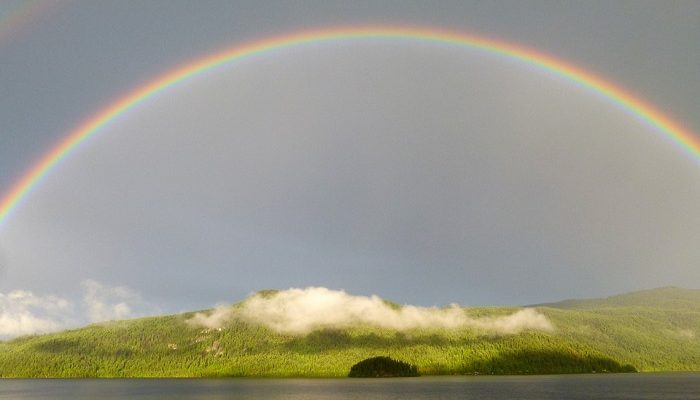 Rainbows are meteorological phenomena, caused by reflection and dispersion of light in water drops, producing a spectrum of multicolored light in a form of an arc in the sky. They always appear opposite of the sun. They can be seen whenever water drops are in the air, and the sunlight shines behind the observer.

A lunar rainbow or nighttime rainbow, sometimes referred as moonbow also exists, but can rarely be seen and only on nights with a strong moonlight.

Although they have a full spectrum of colors, lunar rainbows are often perceived as white, due to poor human vision at night. These rainbows are much rarer than solar rainbows.

Rainbows are a totally unpredictable occurrence. Their appearance is uncommon, and evokes a sense of magic connected to it. They appear suddenly and disappear the same way, but are always a wonderful thing to witness.

Rainbows are generally a symbol of hope and wish fulfillment. They also symbolize luck and fortune, mutual love and spirituality.

It is considered that all bad things will come to an end and shift their course for the better, when you see a rainbow in your dream. The message of this dream is just be patient and keep going and what you want will eventually come to you.

This is a very good symbol in a dream and supports the realization of any endeavor you are currently engaged in.

This dream is also a good omen for new beginnings, so if you had a dream about a rainbow, you can start your new business venture or a new relationship without any hesitation.

Dreams about rainbows are also foretelling good fortune. You might receive something unexpected or be rewarded for your work. This dream might also signify some unusual events you’ve experienced lately or you will experience in the near future.

This dream is also indicating a wish fulfillment, so don’t be surprised if some of your long awaited wishes are being granted, after you’ve had a dream about a rainbow.

Rainbows are also a symbol of mutual love. For couples, dreams about rainbows also signify happiness and emotional bliss in the future.

Dreams about rainbows might reveal you some deep truths about yourself. Maybe you’ll realize you have some fears you weren’t even aware of, which have been causing you depression or stopping you from doing things you really want to do.

After this dream you will probably have some revelation about yourself and it will probably be a negative issue. You might be forced to confront some negative emotions in order to free yourself after such a dream.

A rainbow in a dream might also announce a period of creativity coming into your life. It might also indicate recognition at work and in your society circle.

Rainbow in dreams is also a symbol of spirituality and purity. It is a sign of hope in difficult situations and hope about the good things that are yet to come. This dream encourages you to persevere until that moment comes.

Dreams About Rainbows – Meaning and Interpretation

Dreaming about seeing a rainbow. If you saw a rainbow in your dream, such a dream is a very good sign and signifies good fortune, hope and success. You might be gaining money, fame or prestige in the near future.

It might also be a sign that things will start to change for the better soon, you just need to be patient.

This dream is also an indication of some nice things happening soon in your life.

Dreaming about a rain and a rainbow. If you dreamed about a rain with a rainbow, such a dream is a very good sign announcing some good changes and things coming soon to your life.

Dreaming about a rainbow at night. If you saw a rainbow during night time in your dream, such a dream reveals a deep spiritual and emotional connection which exists in your current romantic relationship.

Dreaming about a white rainbow. A white rainbow in a dream is a sign of strong spirituality and purity of thoughts. It also signifies peace and might indicate you will experience a period of rest and tranquility soon.

Dreaming about double and triple rainbow. A double rainbow in a dream is a good sign, indicating harmony and serendipity. This dream might indicate you have found peace with your life and life purpose. Triple rainbow signifies your good fortune, which will extend to someone close to you.

Sometimes, this dream might indicate a bad investment turning profitable in the end.

Dreaming about sitting on a rainbow. If you were sitting on a rainbow in your dream, such a dream might indicate you have God’s support and many blessings in life. This dream is an extremely good sign and indicates happiness, joy and pleasure in the near future.