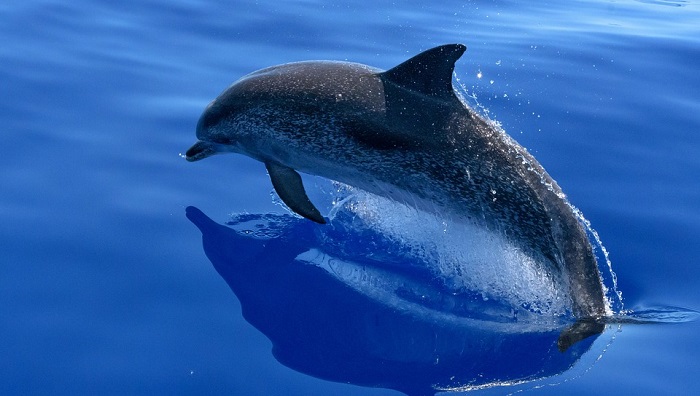 Dolphins are lovely and extraordinary creatures. They can breathe air and live in water, they have an amazing way of communication and people have always seen them magical, inspiring and beautiful animals.

Those creatures are of a playful nature and dolphin motifs usually stand for life, joy and amusement. They are also very adaptable and skillful.

Dolphins have significant place in the realm of symbols and hidden meanings, they are often ascribed supernatural or spiritual powers.

In modern era, these beautiful animals are often featured in popular culture and entertainment industry, as funny, smart and amusing characters or inspirational motifs. These water cuties move fast and gracefully, astounding us with their impressive acrobatics and positive traits we identify them with.

Dolphins are known for they protective and helpful natural behavior. They are seen as fantastic guides to sailors and people lost at sea. They would navigate ships and boats across dangerous and rocky ocean terrains.

They are kind of ‘bay-watchers’, always alarming people if there is some danger nearby, such as sharks or other sea predators. Dolphins are friendly and they are not afraid of humans; it is not unusual they play with humans out of their own will.

There are many amazing and inspiring examples of dolphins’ sense of danger and protection, such as the following one.

Some years ago, a flock of dolphins saved a fishing boat from drowning in depths of the ocean. According to this report, dolphins have sensed underwater stirring, just before devastating tsunami waves usurped the area. The report tells dolphins warned fishermen of this peril, before people had any idea what was coming.

They literally turned away these men from sailing of the shore and saved their lives and their belongings;

Long time ago, people have noticed dolphins’ presence makes them feel calm and secure. These amazing creatures emit waves of positive energy some even consider healing.

In the United States, there are several modern clinics with dolphin-therapy programs! According to researches and reports, this animal therapy trends have shown surprisingly good results in treatment of serious and even life-threatening diseases.

That is another good reason to believe dolphins really possess some special powers; 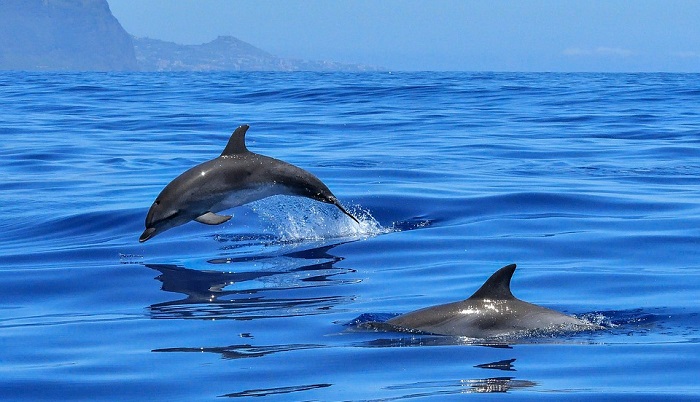 Dolphins are interesting animals, in both biological and spiritual way. They are thought to descend from some ancient land animals, but they have evolved to live in water. Dolphins’ skeleton features two pelvic bones scientists and biologist think to be remains of leg bones.

However, dolphins entered waters nearly fifty millions years ago and completely adapted to their new habitat. They feel at home in vast spaces of oceans and seas.

Dolphins beautiful shiny bodies are well adapted to their natural environment. They are able to swim really fast and move through water with an impressive agility. One of the most impressive dolphins’ characteristics are their brains.

They are large, compared to other animals, which is usually associated with the high level of intelligence often ascribed to these water creatures. There are several species of dolphins and some of them have lips curved in a smile grimace, which is another characteristic making them so calming and pleasant to look.

Did you know dolphins’ teeth have sound collecting purpose? That is completely true! Dolphins usually have around two hundred and fifty small sharp teeth that serve the purpose of a sound receiver;

Another amazing fact about dolphins is their impressive communication skill. Dolphins have names and they communicate each other by calling them.

They produce different types of sounds and easily recognize specific combination as – names. Scientific researches proven they are able to recognize, copy and reproduce characteristic sounds, even if it is emit through speakers.

They use their intelligence along with their communication skills to gather their group and organize their complex hunting strategies.

Dolphins in folklore and pop culture

Dolphins are mentioned in different mythologies and folktales around the world. Celtic societies admired dolphins and considered them wise animals. They associated dolphins with intelligence and progress.

They believed being friends with dolphins brings fortune and new opportunities, because they live in seas, which was an important symbol of life and youth for Celts. Dolphins are commonly featured in Ancient Celtic art.

Dolphins were adored and worshiped by Ancient Greeks, as well. Greeks saw dolphins mystical and magical creatures that have strong connection to sea realms and the Universe itself. They believed it is a lucky sign if dolphins follow a ship.

According to a Greek legend, dolphins guided souls of the dead to the Island of Blessed. In Christian tradition, dolphins are sometimes seen as Christ’s representatives.

Dolphins are portrayed as smart, joyful and friendly pop culture characters. Probably one of the best-known depictions of dolphins was television series about Flipper the Dolphin. Dolphins have significant place in planetary popular novel Hitchhiker’s Guide to the Galaxy, by Douglas Adams, where they are portrayed as mystical and extremely intelligent beings who even knew when the world would end.

There is a funny quote from the book. Feeling that the end of the world is near, dolphins decided to leave the Earth and they left humankind a thank-you note: Goodbye and thanks for all the fish!

Dolphins’ symbolism is generally very positive and fortunate. These cute and calm animals are considered embodiment of grace, joy and the life itself. They are believed to have special connection to realms beyond imagining. Dolphins are some of the most spiritual animals in human culture.

They feature many positive natural traits that are easily translated to the symbolic and spiritual language.

Intelligence and wisdom – As we have said before, dolphins are really intelligent animals and people admire them for that trait.

Dolphins actively use their brains to communicate with each other and organize their life. They have impressive memory and are able to learn and repeat many things. Their developed brains make them more sensitive to human emotions, as well. They have special sort of empathy rarely seen in animal kingdom.

Dolphins use their brains to communicate and learn things, they would never use them for some bad purpose.

People have always considered them wise and smart creatures, so dolphin motifs are commonly associated with these qualities. Dolphins’ depiction in traditional arts often stands as a symbol of progress in an intellectual, as well as in general way.

Beautiful dolphins are one of the strongest spiritual animal symbols of wisdom and intelligence.

Joy and grace – Dolphins are joyful and playful by nature. They do not seem to have many worries in their life, all thanks to their natural intelligence and friendly nature. They are not vicious or maleficent towards other living beings. We all know they even love to play with humans, which is not so common in animal kingdom.

Dolphins are graceful and gentle; they would rather play with you than harm you.

Dolphins also move gracefully and it is a miracle to see their flocks swim and jump out of sparkling seawaters! Just seeing them makes you feel joyful and peaceful. Dolphin motifs stand for the beauty of life, for fun, play and enjoyment.

They are never considered reckless or unsteady; they just know how to use the best of life. Dolphins are strong symbols of joy, grace and fun.

Benevolence and friendliness – Dolphins are seen kind and friendly animals that even like to play with humans or help them in dangerous situations. Dolphins represent unconditional love and support, because they help others without asking anything in return or expecting something.

They are of a calm nature and benevolent towards other living beings. It is very unlikely they would attack anyone if not being threatened.

Sensitivity – These impressive and lovely creatures are extremely sensitive to their environment. As we have mentioned, they are able to feel even the tiniest vibrations of some bad energy and predict disaster long before humans realize what is going on.

They are very intuitive and their natural senses are amazing. That is an impressive survival mechanism and very helpful to other living beings, as well.

In the wild, dolphins are generally very hard to approach, because they sense your presence from kilometers away. However, if they somehow get in touch with people, they could become attached and friendly towards them;

Communication – Dolphins’ communication skills are well studied in modern times and have been admired since far past. These animals use their special language and wide specter of sound in order to organize their flocks and everything. They are extremely intelligent animals and have impressively efficient system of communication amongst them.

Dolphin as totem and spirit animal

Friendly and intelligent Dolphin is an amazing totem animal to have. This magnificent creature is a great protector and teacher.

People born under Dolphin totem are graceful, smart and of a warm nature. They are often engaged with some spiritual stuff, always exploring new channels and ways to direct their life energy.

They are imaginative, very creative and talkative personas. Here are the most common Dolphin people traits.

Dolphin people are sensitive individuals who tend to daydream and get engaged with mystical, spiritual and magical things. They always search for balance in life and tend to be in harmony with other living beings.

They are gentle, caring and warm, but not too fragile or easily manipulated. They spread their positive energy around and make others feel calm, content and relaxed around them. They are good learners and hungry for knowledge, which they like to pass to others who would listen to them.

Dolphin individuals are not demanding or intrusive, they are relaxed and do not seek attention, but they usually get it, because of their charismatic persona.

People love to hear what Dolphin people have to say, because they are wise and know many things, especially about spiritual and mystical realms common people are not familiar with.

Dolphin people are creative and often interested in art. They like to visit exhibitions and create on their own.

They are also interested in music and they could be amazing composers and performers, as well.

These individuals are extremely good friends who would never let you down. They care for their loved ones and are always willing to help. If you are a dolphin personality, be aware of vicious people who would seek to use your benevolence for their causes.

Rarely, but it happens, some Dolphin people get so optimistic that they never see bad intentions in others. Just make sure to always evaluate the situation properly and trust your guts, because it is unlikely to let you down.

The gift of good intuition is another important trait of Dolphin totem personalities. These people would usually trust their inner voice and it would turn out the best for them, in almost one hundred percent cases.

They are rational and intelligent, but their intuition always prevails if making some important life decisions. Dolphin people believe in realms beyond our reality and love to deal with mysticism and spirituality.

Sometimes, they could get lost in it, so just keep in mind you have to stay in touch with reality.

Dolphin people really know how to enjoy life. They love to have fun with their friends and to take the best their faith has to offer. Their positive approach to life makes their career path successful and easy. They are also lucky in love and make strong and lasting relationships and friendships.

Although they appear gentle, Dolphin people are not easily shaken by influences around and are not easily manipulated. They are determine about their goals, but they are not aggressive and unscrupulous ambition junkies.

Dolphin people are able to balance their desires, needs and practical goals and usually have long and prosperous life before them.