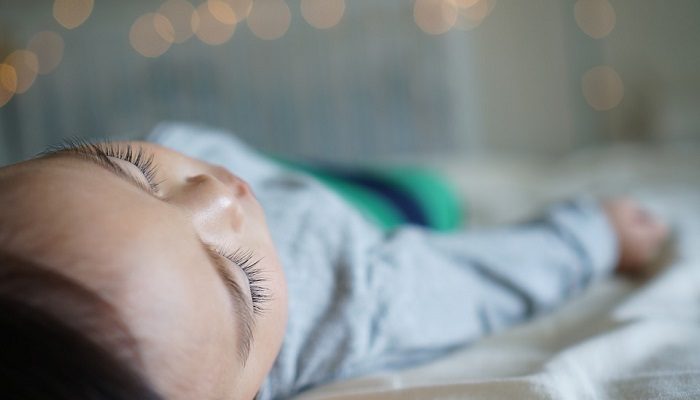 The dream world is still a mystery, despite of centuries of attempts to decipher it. From the ancient civilizations of Babylon, Egypt, China, Greece and others, till present times, people have always been fascinated by dreams and the messages they are bringing.

In early times, dreams have been interpreted by the chosen ones, which were considered to have a supernatural communication with divinity.

In modern times, various neurobiology and psychology schools have studied dreams and given different theories about their meaning.

Almost all of them studied and dealt with adult dreams. But, what about babies and their dreams; and do they in fact have any?

To understand dreams, we need to understand sleep cycles. Sleep is divided into two cycles: REM (rapid eye movement) and Non – REM cycle. These two cycles change during the night.

Sleep usually begins with a period of Non – REM sleep, which lasts about 90 minutes of usually deep sleep, when our body recovers and strengthens our immunity, repair tissue, etc. Non – REM periods are followed by short periods of REM sleep, during which we dream, and our sleep is more restless.

These cycles lengthen during the night and the last REM cycle may last an hour. REM sleep phases are characterized by more active sleep, and we wake more easily in these phases.

So, we know we dream, but what about babies? Do babies dream?

One thing is sure; they cannot give us that answer, because they can’t talk yet. So we can only guess they might be dreaming, by looking at the changing expressions on their faces, while they sleep.

So, what is the answer, do we know the actual truth?

During their sleep, babies tend to make many different faces; they smile, they twitch and jerk, make grimaces, etc. 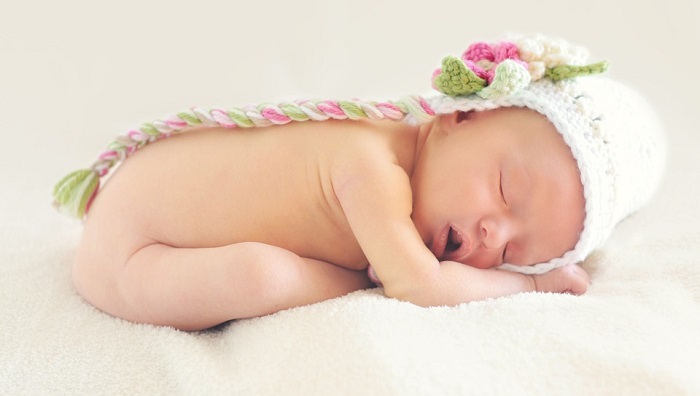 Observing your baby’s expressions changing on its face while it’s sleeping, might lead you to believe babies also dream, as well as adults.

But is that true? Do babies dream?

There are two main groups, one, which has an opinion babies don’t dream, and the other, which believes they do dream. Both groups have their explanations about their opinions.

The ones which believe babies don’t dream, explain their opinion with the fact that babies lack real life experience, due to which they are not able to have dreams, although these scientists agree babies go through a REM phase during sleep, which is the dream phase in adult’s sleep.

The ones which believe babies do dream explain their opinion with the fact that babies have REM phase during their sleep, which lasts more than a half of their sleep time.

Considering the fact that babies tend to sleep a lot, at least in the first weeks of their life, the conclusion is they spend a lot of time in REM phase, so they have plenty of time to dream.

Although these scientists believe babies dream, they are not sure about the content of their dreams.

Some of the world’s leading neuroscientists and experts on children dreaming, think babies are dreamless in the first few years of their life.

They explain their opinion, with the fact that babies practically don’t have any experience at all, and they don’t have content for their dreams.

These scientists agree babies, like adults, enter REM (rapid eye movement) sleep phase, which is the phase when adults dream.

According to them, babies enter the REM phase during sleeping from their birth, and spend half of their sleep in that phase. Babies are unlike adults, which spend less than one quarter in REM, while the other three quarters of their sleep is in the Non – REM phase, when there are no dreams.

Because of the length spent in REM phase, and the fact, babies sleep almost all the time, these scientists believe if babies did dream, they would have to spend in a dream state a lot more time than adults, and there just isn’t enough experience they’ve gathered from their awake state, to dream for such a long period of time.

Instead, these scientists believe the REM phase serves newborns and infants to help their brains to develop, build neurological pathways and became integrated.

These scientists believe dreaming is a cognitive process, which begins in early childhood, when children have developed a capacity to imagine things. They consider, even children at the age of 4 – 5 years, have plain dreams, without many emotions and characters moving or doing something.

According to their opinion, vivid dreams with structure, begin at the age of 7 – 8 years, approximately the period children develop an understanding about their identity, which is very important to have an active role in a dream.

So, according to this group of scientists, infants don’t dream anything, because their brains have some more important things to do.

Another group of scientists has an opinion babies do dream, especially considering the fact they spend more than 50% of their sleep in REM phase, which is a phase when dreams happen. They think it’s logical babies dream, having so much time in their sleep to do so.

This group of scientists, explain their opinion by the fact, babies display REM sleep, with rapid eye movement, which can be seen under their eyelids while they are sleeping.

Also, babies, especially newborns, spend more than 50% of their sleep time in the REM phase. And we all know babies do sleep a lot, especially in their first weeks after they are born.

According to these scientists, because REM sleep occurs in all life stages, including fetal life as well, even fetuses have dreams. According to some opinions, babies dream even in the womb.

By the third trimester fetuses are sleeping most of the time, and more than 50% of that sleep is in REM stage.

These scientists have no doubts babies are dreaming. Their proof is the fact they have an REM phase in their sleep.

Although they have no doubts babies are dreaming, they have no answers to the question what are babies dreaming about, explaining their opinion with a fact, babies don’t communicate, so there’s basically no way to find out what are they dreaming.

So, according to this group of scientists, the conclusion is, if babies do dream, they dream a lot. On the other hand, the content of their dreams is unknown, we can only guess about it.

What Do Babies Dream About?

If in fact, babies did dream, what would they be dreaming about? If we compare babies with us, they should be having dreams about things they have experienced during their lifetime.

But we are all aware they haven’t lived long enough to do that.

Anyway, they do have some experience, and they might be dreaming about that, but no one knows for sure.

According to some scientists who believe babies dream, babies most likely have silent dreams, because they don’t speak. Their dreams most likely consist of images without dialogue.

Some scientists suppose babies probably dream infantile things, but don’t really know what would those things exactly be.

Some scientists try to make a comparison to adults, explaining that vertical eye movement during REM in adults indicates moving vertically, as if in climbing stairs, and horizontal eye movement might indicate moving horizontally, as if walking in a field, so similar things might be happening while babies dream also.

These scientists agree babies don’t dream the way we do. According to them, our dreams are way too complex to compare them to the supposed dreams which babies might be having.

Our dreams consist of different events, caused by memories, repressed emotions and feelings, or everyday action; they have participants, us and people from our lives, complete strangers or people we have seen somewhere or created them with our imagination.

Our dreams have dialogs, we talk, we sing, we listen to others doing the same things, etc.

Having those facts in mind, these experts conclude babies don’t have developed mental skills to construct such dreams. Babies also don’t have a developed sense of themselves, of other people and objects around them.

They also point out the fact of the enormous growth babies experience especially in their first year, and much of the growth happening during their sleep.

Some Other Facts about Babies Sleep

Some scientists believe children develop real fears around the age 2 – 3, so if they do dream, they probably don’t have dreams which are nightmares, before that age. The fact your baby wakes up suddenly, screaming, and then settling back to sleep after a couple of minutes, doesn’t mean it’s having a nightmare.

Babies wake up at night like adults, usually when they are in the light sleep phase. Unlike adults, babies have shorter sleep cycles. While adults go through various stages of sleep every 90 minutes, infants do that in every 60 minutes.

Unlike adults, infants can go right away into the REM stage, or they can start with Non – REM and go to REM later.

In the REM phase, the body is totally relaxed, and the brain is active. It’s the same with babies.

A baby’s sleep cycle is about a half of the cycle of an adult, because babies need shorter sleep phases to ensure they are fed on time. As they grow, their REM phase shortens.

In time they have longer sleep phases. If we chose to believe they do dream, they probably dream the most in the first weeks and months of their life, because as they grow up, their REM phase is shortened.

Depriving your baby of sleep, so it could sleep better at night, is not a good idea, because they might get fussy and overtired, which is rising their stress level, so they will have a hard time sleeping well at night.

Babies often have short naps during the day at first, and waking up at night during the first year, is often a result of the development of the baby’s motoric and cognitive skills.

It’s only when babies start talking, we can have some insight into what happens when they sleep. But even then, a lot of time might pass before we can really hear about their dream adventures.

Sleeping is of outmost importance for babies to develop. Their brain grows and processes the information it gathers throughout the day, and it does it daily, day by day.

Sleep is also very important for adults as well, to allow us to consolidate the memories and experiences we had, and increasing our knowledge at the end of that process.

Babies go through a similar process of solidifying information, and that is why their sleep is so important.

We maybe don’t know exactly what is going on while they are sleeping and what are they dreaming about, if they do dream, but their brain is undoubtedly doing a lot. Babies are certainly learning a lot while sleeping, especially words.

So, do babies dream, and what do they dream about?

As a conclusion, we have to answer to both questions – we don’t know for sure.

Babies might or might not dream, and if they do dream, we can only guess what they dream about.

It is obvious we cannot have more precise, scientifically based answers to our questions, so guessing is all it remains, after all this talk. You chose which opinion seems more likely to you.