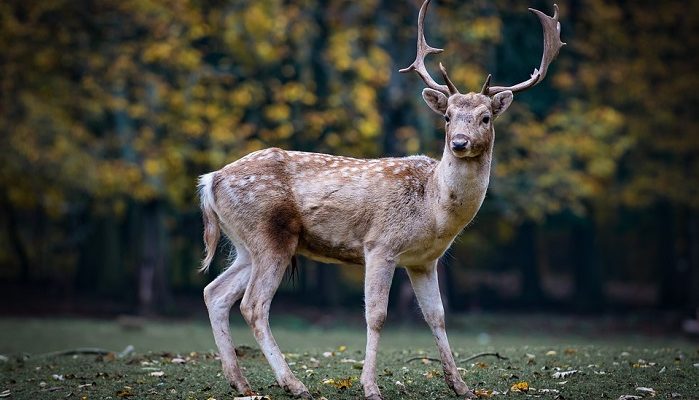 If an animal could have so many extraordinary qualities combined, including strength, speed and agility, as well as the most elegant and gracious moves, than we should certainly think of a beautiful deer.

Just one glance on this astounding creature would melt your heart down.

Deer are gentle, lovely creatures that even might appear fragile and soft, but, in fact, they are courageous and fierce, if they have to be.

Their nature is not as timid as you might think, but they rather stay out of trouble.

Deer are thought to be some of the most gorgeous, lovely and gracious animals in the world. Their symbolism is strong and tightly bound to Mother Earth’s magic and natural beauty;

Females are lovely and appear gracious and sophisticated, more slender and elegant than males. They both have adorable faces with beautiful, sparkling dark eyed and cute noses!

Young ones are a special story. You certainly remember Bambi lamb from popular Disney’s movie. Deer lambs are cute, fragile and completely a breathtaking sight!

Even if you are not so fond of animals in general, you would be helpless in front of a lovely deer lamb!

This amazing forest creature has always been inspiring peoples’ myths and legends, all over the world. In many cultures, deer stand for natural magnificence, freedom and grace;

What does a deer symbolize? This magnificent forest animal has always been associated with positive forces of nature, free spirit and natural elegance.

Deer represent a powerful combination of both incredible strength and tenderness; these beautiful four-legged fellows remind us wilderness and elegance could go hand by hand. 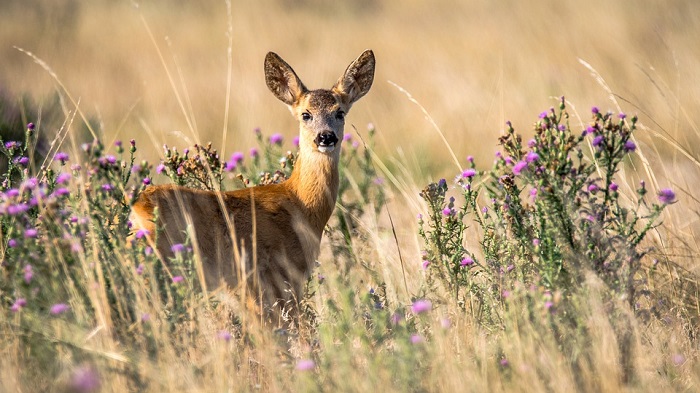 Not all wild and free spirited beings have to be aggressive, cruel and of a dreadful appearance. Gentle deer prove that, by all means.

Deer represent a mighty combination of great values, such as bravery and strength, and tenderness, elegance and compassion;

Exactly that perception of a deer as a creature of great beauty and gracefulness made these animals ultimate symbols of things that are pure and soft, but not easily conquered, stained by evil and sin or manipulated.

Deer embody primal forces of Mother Earth and not in one mythological system they are associated and identified with spirits of woods, forests and other natural beauties and riches.

Their spiritual power is immense!

Deer in culture and mythology

Deer are much appreciated as mythical and legendary animals in traditions around the world and throughout human history.

Grace and strength they embody as some of the most highly valued concepts, made deer a powerful symbol of infinite creation, life force, natural energy and recreation in many different cultural systems.

A direct connection of deer and heavenly forces can be seen in Celtic mythological tales about their most famous deity.

It is Cernunnos, the mighty Celtic god of masculine energy and fertility and ruler of the forests. Cernunnos is portrayed as a man with ears and antlers of a stag.

Cernunnos’s name could be literally translated as ‘the one with the horns/antlers’. This mythical deer was much worshiped by Celtic people.

They also believed Cernunnos master both death and life, rules over other animals and brings wealth.

Ancient Greeks and Romans had both have a special admiration for different animals. They would often ascribe them some sod-like powers and associate them with their human-like gods.

Deer were much beloved and admired in both of these magnificent cultural systems. In Ancient Greece, a deer was a loyal companion of Greek goddess of hunt, beautiful and skillful Artemis.

Similarly, in Roman pantheon, deer is seen beside their hunt deity, the beautiful Diane.

In fact, Christ himself is sometimes referred as a ‘deer amongst deer’, meaning ‘a faithful amongst faithful’.

A deer is an ultimate symbol of Christ’s kindness and mercy, but also his strength and power that are above sin and darkness.

A motif of a deer with a snake under his feet is a symbolical depiction of Christ conquering forces of evil;

What does a stag mean?

A male deer, or a stag, represents true masculinity, but in its less aggressive edition. Stag represents pride, strength and power.

This animal is often associated with royal power, leadership and kingship, in the first place. Stag animal is believed to be the ruler of other nature creature, a just, honorable and brave king of the forest.

However, there is something specific and amazing about this ‘king’.

While other ‘king-like’ animals or mythical creatures (e.g. a lion, a tiger, a dragon and so on) are often portrayed as just and powerful, but aggressive and merciless rulers, stags are seen as an ultimate picture of a ruler who is kind, merciful, strong willed and proud.

In spiritual sense, a stag is not cruel king; this magnificent creature is rather a wise and strong leader that offers grace and protection, but always stands its ground and defends what he thinks of as its own.

Stag king rules his kingdom with grace, wisdom and understanding, not by force.

This mysterious and wonderful being is present in mythological tales of different nations.

White deer, however, are not imaginary animals; they do exist, but are extremely rare. Their uniqueness makes them even stronger and more magical symbol and spirit animal than a common deer.

Since very ancient times until modern days, white stags are believed to be if not magical than at least extraordinary and magnificent.

There are numerous legends about white stags. They could be found in Mesopotamian and other Middle Eastern sources, throughout Asia, to China and Japan.

They appear in Celtic, Scottish and Hungarian mythology, as well;

Celtic people have always nurtured a special connection with the world of spirits.

In their mythology, the figure of White Stag was a symbolical embodiment of forces from the Other side, a creature that has the ability to communicate with realms unreachable to humans. They believed the White Stag brings messages from spiritual world, positive changes and fortune.

White stag symbol was widely used in many ways. One of the most popular historical uses was a heraldic white stag used on standards of Richard II, the medieval king of England;

Doe is the feminine of deer. This amazing, graceful creature possesses powers characteristic to those of all gentle and benevolent animals. such as dove, for example, but not necessarily female ones.

Just as a stag represents pure masculinity, but that of great kindness and grace, does embody the concept of femininity; femininity that is delicate, lovable, beautiful, understanding and caring.

Deer antlers were (and still are) powerful symbol and medicine for shamanic cultures, occult practitioners and others dealing with ancient magical practices.

They are believed to grant masculine power, protection and wealth.

In deer family, antlers are a ‘headdress’ of males, which easily explains its masculine power and strong symbolism. The only exception are rain deer. Both female and male rain deer have antlers;

In the world of magical uses of animal materials, antlers serve the similar purpose of that of tusk and bone.

These specific parts are believed to carry the spirit and power of the animal within and that those could be used in order for humans to acquire that energy.

Since deer have always been animals important to humans, as a food source, in the first place, their spiritual power must be great. So is the power of deer body parts, such as antlers.

Deer antlers are associated with divine forces, solar and earthly energies and masculinity. However, antlers could also be related to feminine wisdom, hunt and lunar energy, which are characteristic to female spirit;

Representing pure and just masculine spirit, deer antlers also represent kingly power. It was a kind of a status symbol of royalty and kingship, as well.

Antlers have also been a popular trophy, so these beautiful animals were killed by many numbers. However, there are laws and regulations that manage hunting seasons.

What does venison mean?

Venison is deer meat, simply put. It is a rich and tasteful, nutritious food. When it comes to consumption and symbolical meaning of venison, this type of meat is eaten rarely compared to other sources of protein.

Throughout human history, venison has been considered food reserved for nobility and royalty.

For example, in Europe, it was a sort of status symbol.

Just recall one of those scenes from historical movies about late medieval courts and their lavish feasts!

Okay, we certainly got an image about what do deer represent around the planet and throughout history. The meaning of a deer tattoo is mostly based upon these interpretations.

Deer are considered some of the most beautiful, gracious and noble animals on the world. This magnificent forest spirit is a popular tattoo motif.

Deer tattoo motifs greatly vary in design. There is a lot of freedom in interpreting a client’s desires, in this case.

Deer tattoos are sometimes done in a manner of some mythical depiction of the animal (e.g. Artemis with a deer, Cernunnos, or else).

A stag tattoo could be done to represent masculine power, while doe tattoo is a symbol of feminine grace.

This beautiful, graceful and strong totem animal offers positive guidance and a special connection with forces of nature.

Deer totem is gentle and caring, wise and protective. You could learn a lot from it and became a better person. Deer people are surely some of the most positive and kind people you could encounter.

However, they are not weak. They would defend themselves and people they care for, by all costs.

They fall in love deeply and with great passion; not only in love with someone, but also with things they find exciting and inspirational. They have rich imagination and are dreamers.

Their dreams are not unreachable, because they strongly believe in them, but not to the point they lose contact with reality. They are very down to earth and humble.

Deer people admire and respect nature and accept the natural way of thing to happen.

They love unconditionally and care about others. They also think good of themselves, meaning they nurture both their physical, mental and emotional self.

They are not spoiled or anything like that. Deer people believe the true beauty comes within and that people should be gentle towards each other.

However, if it comes to the point they have to show their teeth in order to make their loved ones safe or stand for their own cause, they will do so.

They choose peaceful and patient way of solving problems, not aggression and force.

These people are known to be honest and to keep to their words. They are loyal companions and supportive friends.

Deer people do have strong personality, but their flaw might be their kindness. Sometimes they think too good of others that someone manipulate their good will and benevolence to achieve something for themselves.

When it comes to making promises, you should know a deer person would never break it or betray you.

These people are noble and just.

Just as stags change their antlers, deer people believe in power of transformation. They know destiny is not a straight line and that changes are needed.

They are able to adapt to different situations are that is where their strength shows up.

They never give up easily and are capable of getting through hardest times in life with a smile on their face.

Their nature is joyful and optimistic.