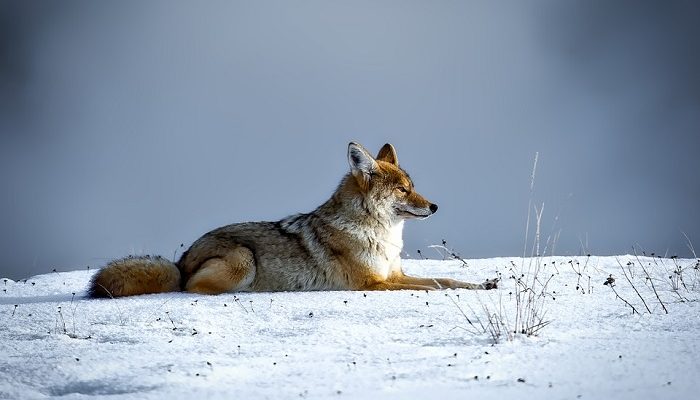 Are you amongst those who always cheered for Will E. Coyote to catch the Road Runner, or you enjoyed his effortless tricks to somehow outsmart the speedy fellow?

Well, regardless of your attitude towards Will E., you are certainly familiar with both of these cartoon characters.

Did you ever ask yourself, why the coyote is represented as a clumsy and unhandy character? Are coyotes really that unlucky creatures?

We believe they are not. Perhaps such depiction is made because their nature is completely opposite or it was simply a director’s imagination.

Be it as it may with Will E. the Coyote, these animals are very interesting to humans and believed to have special spiritual powers, especially in North America.

For Native American tribes, coyotes have always been important animals. They needed to learn to live with these tricky, smart, sometimes dangerous and amazing wild animals. Coyotes are often used as tribal totems in North America.

Coyote totem poles are some of the most numerous totem poles amongst local tribes. Coyotes are appreciated and respected in shamanic cultures;

In Native American mythology, coyotes play role of tricksters and their portrayals in legends and folktales are very similar to European fox fables. Coyote depictions as a tricktster-spirit vary depending on particular local tradition.

While for some tribes coyotes represent dumb and silly creature (right, just as Will E. the Coyote!), in other this interesting animal is seen useful and good spirit.

Some Native American tribes depict coyotes as not so intelligent animals, but others find them fortunate and helpful;

There are folktales and beliefs about good-spirited, fortunate and helpful coyotes. Many tribes believe coyotes help humans, return to them stolen goods, food, tools and other things. They are believed to bring essentially important fire to humans and deceive and chase away monsters and maleficent creatures and demons. 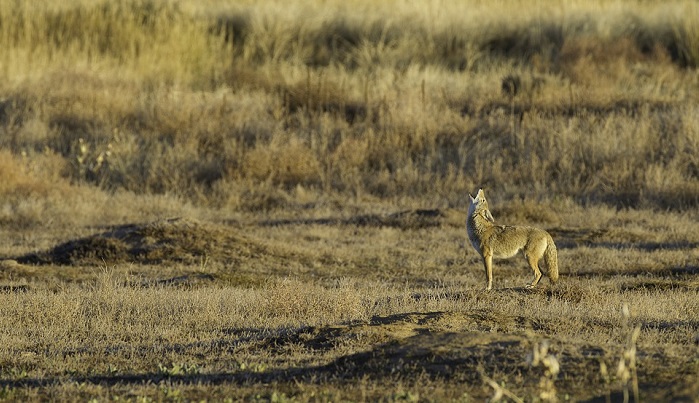 In addition, Native American folklore associates all animals with the energy of overall existence, including both real and spiritual world.

Coyotes are often seen as mediators between realms of hidden wisdom and magic and real world we live in. That is why coyotes are popular shamanic spirit animals and totems;

There are numerous Native American beliefs about coyotes. They possess knowledge and powers of spiritual forces, magical knowledge and mystery. They are associated with both creation and destruction, deception and imagination, wisdom and trickery.

Coyotes inspire numerous of folktales and superstitions. One thing is certain; coyotes are seen as neither ultimately good nor evil spirit or deity.

Navajo tribe values and honors coyotes, but these animals are still seen evil by many others;

Coyotes inhabit prairies of North America, so coyote beliefs, legends and tales are abundant in these areas. There are some coyote related tales in South America, as well.

Regardless of coyotes’ general depiction, this animal is always seen as a powerful totem and spirit.

It is associated with hunt and many tribes believe spirit of the Coyote brings luck and fortune to hunters.

Native American legends rarely refer to coyote as good or evil, but they see it as a creature that brings some sort of balance, because it embodies both sides of the coin.

Navajo tribe has always paid special attention to coyotes. They believe seeing a coyote means you should stop what you are doing and retreat. Your path is wrong and the coyote is here to warn you in time;

Shoshoni people associate coyotes with ending of things, as well. They know an ending is important to make a change, to start over and develop. It is a positive sign;

Comanche people believe coyotes are good spirits and they tell stories about coyotes that once saved a young boy and the whole buffalo population;

There are different versions of Crows’ creation myths (some of the stories tell about two coyotes, instead of one), but the main idea is the same.

They believe Coyote god had created the whole life. According to legends featuring two coyote characters, the one of them was the wise god who had created earth, humans and all animals and the other one was an adventurous trickster god;

This coyote duality is present in almost all Native American coyote beliefs. As we have mentioned, both sides of the coin are needed to create the universal balance.

For Native Americans, the magical Coyote embodies both sides.

Coyotes are relatively small, slender, fast and agile members of canine family. They are everything but clumsy, so Will E. the Coyote is just an imaginary character.

In symbolical sense, apart from traditional Native American beliefs, coyotes represent many things, including freedom, joy, courage, changes, humor, but deceit, as well. Coyotes need to use all of their wits and skills, in order to survive prairies’ challenges.

Change and the new beginning – As we have mentioned above, coyotes represent the power of change and the importance of an ending, for many Native American tribes.

Speaking of coyote symbolism generally, they do represent changes. They appear as spirit guides in our lives to remind us change is inevitable.

We have to adapt to circumstances we find ourselves into and use opportunities in front of us.

Deception and trickery – Coyote symbolism is similar to that of foxes. These canine family members are both depicted as deceitful and trickster characters in different mythologies. Sometimes, they are even considered evil.

Coyotes are small animals that need to use their cleverness to outsmart their enemies.

However, they might make trouble to other living beings and deceive them, in order to get what they want.

Coyotes symbolize trickery and mischief and are often featured in folktales as either smart and cunning characters or troublesome, but not so intelligent. These are traits coyotes are both admired and despised for.

Spirituality and wisdom – This is a positive aspect of coyote symbolism. These animals are believed to possess magical powers and ability to mediate between spiritual world and the reality. They are often featured in shamanic rituals or called upon for help.

Although coyotes are sometimes considered silly, some interpretations suggest they are valued for their intelligence and wisdom.

Protection and care – Coyotes are very protective of their relatives. They represent the sense of the importance of family bounds and unity. They symbolize protection, parental love and care. They are also considered symbols of friendliness and teamwork. They are cooperative and aware their strength lies in solidarity.

Humor and fun – This is an interesting interpretation, but if you for a moment imagine a coyote family or a pack, you will get the picture. Coyotes are friendly towards one another, although there might be occasional disagreements, of course.

Symbolically, they represent the importance of having fun in life. We will never advance if we look upon our life too seriously. Everyone needs a time to relax, have fun and enjoy life.

Courage and adaptability – Coyotes are brave animals, despite of being small. These canines are fierce and fearless, when it comes to defending themselves. They represent great courage and bravery.

Coyote totem is powerful one when it comes to seeking inner strength and boldness to do things.

These animals also need to be flexible and ready to changes. They are adaptable to all of prairies challenges, so, in symbolical sense, they also represent this skill.

This one of coyotes’ traits people especially find worth of admiration and respect.

Coyote totem is one of the most popular Native American clan totem animals. Why do they seek for coyote guidance?

They think of coyotes as magical shape shifters, beings that come into our world and life to remind us of some of the most important ideas about our existence.

According to North Americas’ tribes’ beliefs, coyotes embody the Great Spirit’s energy and are sent by it to guide us through all of the phases in our lives.

As a totem and spirit animal, coyote embodies the vital dual concepts in human culture: the life and death, beginning and the ending, forces of evil and good.

They are all needed in order to find true balance and harmony;

People born under Coyote totem are wise, clever and agile individuals. However, they do not hesitate to use tricks and deceit from time to time.

They are cunning and able to get out any trouble! Their somewhat tricky character does not necessarily make them bad people.

On the contrary, Coyote people are great and protective friends, excellent parents and amazing team workers.

They are fun to be around and easily put smile on other peoples’ faces.

Coyote people are brave. They might not appear strong physically, but their spirit is fascinating. They have a flame burning inside and a great charisma. Coyote people rarely give up their cause and take risks.

They believe life is to be lived to the fullest. They know every phase in life has an ending and an ending brings new beginnings and fresh opportunities.

Coyote individuals laugh a lot and easily make new friends. They are positive and cheerful and people think of them as entertainers and great company.

They also enjoy having fun and making other people feel good about their presence, but also about themselves.

Coyote people stories are always smart and funny at the same time.

Unlike their cartoon coyote counterpart, Coyote people are agile and skillful. They are active and ready to take opportunities.

Their natural intelligence could show up in two directions or both of them, depending on situation: they could be honorable and just in their plans, but they could also do tricks and use deceit in order to achieve their goals.

No one would rely on a Coyote individual on a first sight, because they are believed to be cunning and use trickery.

However, that is not always the case. If you value your Coyote totem powers, please use it in the ‘right’ manner. You are an intelligent person worth of respect and admiration.

Do not let the easy way of seduction and trickery deceives you. At the end, you will see the honorable way is always the better one!

Coyotes express great commitment to their family and so do Coyote people. They are protective parents who know how to prepare their children for adult life.

They are also caring and protective friends, who never find it hard to help others.

Being smart and cunning, Coyote people are not the ones you could influence easily or manipulate.

Coyote people are highly cooperative and they show great potential working in team.

If they suppress their trickster character inside, Coyote individuals become supportive of their team, loyal to their coworkers and extremely efficient in doing their part of job.

They love to work in collective and are usually not leaders, but their role is always noticed and respected and their opinion valued.