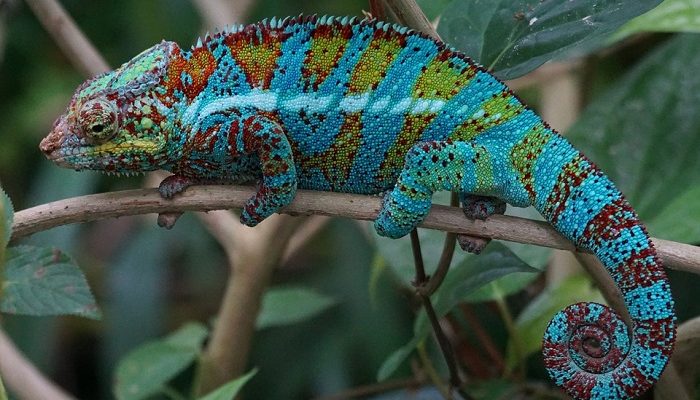 Chameleons are certainly some of the most intriguing species on Earth. These extraordinary lizards possess characteristics very rare in animal kingdom, which is the reason we find them so remarkable and inspiring.

They are amazing. Their telescopic eyes, extremely long sticky tongues for catching food, along with their body shape and, of course, their special color-changing skin, make chameleons creatures of great natural and symbolical value.

Chameleons are lizards and yet, they differ from all other lizard species because of their specific appearance, above all else.

Not only chameleons have remarkably long tongues and multifunctional skin and eyes, but their bodies are also formed in a strange manner.

Chameleons’ bodies are flat on sides, their tails are often skidded as a snake and they do not have neck. Chameleons’ heads are angular, so they look like little dragons.

We usually think of chameleons that are of bright green color and of their amazing ability to change the color of their skin and completely blend into their surroundings.

There are many species of chameleons and they differ depending on their shape, size and color. Chameleons originate from tropical African rainforests and they live in treetops or bushes and rarely come down to the ground.

They would go down only if seeking water or laying their eggs. These animals are slow and static, most of the time.

Chameleon would rather patiently wait for its prey to come to it. With an extremely fast move of its amazingly long tongue, skidded and hidden inside chameleon’s mouth, the lizard would catch the approaching insect in a matter of seconds.

Chameleon, a master of disguise

The most remarkable thing about chameleons, which make them special in every possible sense, is their ability to change the color of their skin.

Before we give an interpretation of chameleon symbolism and spiritual meaning, let us see why they are so special, in the first place. 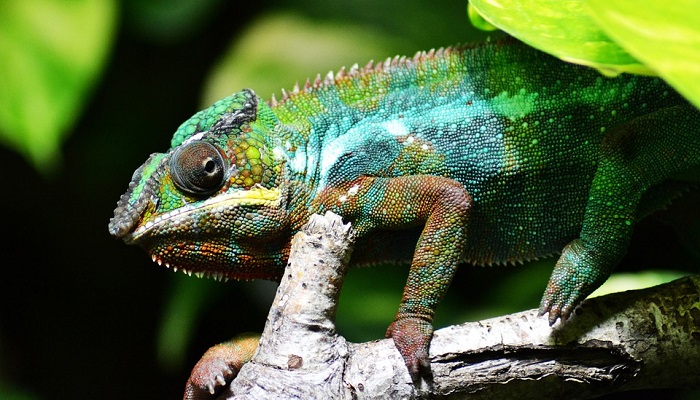 Here are some amazing and inspiring facts about these extraordinary creatures.

Habitat – Almost half of all chameleon species inhabit Madagascar, the land of many extraordinary animal species we find exotic and strange. There are about one hundred and sixty species of chameleons in the world. Some of them are to be found in Southern Europe, Sri Lanka and USA, in California, Florida and Hawaii.

Color ‘transformers’ – Most chameleon species change their colors in range from brownish to green and vice versa, while some species have the amazing ability to change their skin to whatever color they like. This incredible transformation takes only about twenty second!

Chameleons possess special types of skin cells, containing different pigments other living beings do not have. There are different opinions on reasons for changing skin color.

While the most common opinion claims chameleons change their skins exclusively to blend into their surroundings, many scientists would not agree.

Latest data from scientific researches claims temperature and other outer factors induce these transformations, as well;

Impressive eyesight – Chameleons can move their eyeballs for 360 degrees around! They are able to see in both directions at the same time and move their eyes independently of one another. Their eyeballs are covered with skin and have only a small hole for their pupils.

Chameleons have incredibly good sight compared to other reptiles. It allows them to clearly see small insects from a distance of about five to ten meters.

Incredible tongue – Believe it or not, chameleon’s tongue is almost two times longer than its whole body. It is chameleons’ equipment for catching insects. The top of these animals’ tongues is shaped as a ball; it is strong muscular structure that transforms into a bowl for sucking the prey.

With their amazing tongue, chameleons catch their prey within 0.07 seconds;

Excellent climbers – There is another impressive fact about chameleon’s body ‘design’. These lizards have specially designed legs with fingers that resemble pincers.

Their front legs have two outer and three inner fingers, while their back legs fingers have the opposite position. Such legs and feet make chameleons true masters of climbing.

Other senses – Chameleons do not hear very well. Just as snakes, these lizards do not possess outer or inner ears, so they naturally do not have eardrums.

However, they are not entirely deaf. Chameleons are able to hear sounds in range from 200 to 600 Hz. On the other hand, chameleons have ability of ultraviolet vision.

Chameleons are impressive little creatures, as we have already seen. These amazing characteristics make them interesting to humans, in both biological and spiritual sense.

Let us see what these strange lizards represent in symbolical sense and what their totem powers are.

Static – Chameleons are slow and they do not move around a lot. They do move, but very slow. They use their incredible legs and fingers to pass from a branch to branch and rarely come down to the ground.

Chameleons are able to wait for ages until some poor insect come in their way. They use their impressive tongues to catch them. They represent patience, slow motion and being static.

Patience and relaxation – Chameleons look as nothing bothers them at all. They love just to sit in treetops and enjoy sunrays. Chameleons like sunbathing. They also represent life without worries, peace and relaxation. They are extremely steady and calm creatures.

Adaptability – Chameleons are highly adaptable living beings. Not only they could change their color in order to disguise and hide (if that is truly the case), but they are also able to endure opposite climate extremes.

These animals can survive both extreme heat and cold, without any damage. The best example is the specie that, unlike most of chameleon species, inhabits deserts, where temperature variations are extreme within a single day.

Transformation – Of course, people usually identify chameleons with their ability to change color. It is the most powerful symbolic value of chameleons. We see these amazing lizards as masters of disguise and associate them with ideas of transformation, change, adaptability, disguise, mystery, secrets.

Color changes are often symbolically linked to emotion changes. It is not that chameleons change their color because of their emotional state, but we could interpret their color transformation as an embodiment of our own emotional changes, in symbolical sense, of course.

Chameleon as totem and spirit animal

Chameleon totem is rare and a good one. This spirit animal possesses some characteristics people mostly find positive.

If you are born under Chameleon totem, you are probably laid back person with a positive approach to life. Chameleon people are usually intriguing individuals, but they tend to be too relaxed sometimes.

These are their main traits.

Chameleon people nature is very laid back. They love simple things in life and know how to enjoy it. These people are not risk takers. They are able to arrange their life in a way that would make them feel comfortable and relaxed.

Above all, they love routine and are never bored, because they do not have need to be constantly active. They are very patient and able to wait for things to happen, after they did what was in their power. They are determined, but they do not rush into things or force them to happen.

Chameleon people are not easy to irritate or disturb. They are relaxed and rarely get anxious. However, they naturally do not engage with heavy topics and like to talk about positive or simple things.

That does not mean they do not have knowledge about the world they live in, but they like to keep their minds positive and stay away from things that are not of their own business.

On the other hand, they are careful listeners and quite supportive. They are good, trustworthy and loving friends, partners and family members.

These people are able to make others feel comfortable and relaxed, as well. Their positive aura help others open up and share their feelings and thought.

Although, chameleon people themselves do not like to talk about heavy things that are out of their power to change them, they do not get exhausted while listening to other people hard times. They love to help others.

Chameleon totem people are steady and enjoy slow pace in life. They love spending time with friends, reading a book, watching a movie. However, there is always something remarkable about them.

They are generally calm and silent, but they often stand out because of their appearance. They love chic, sub cultural, underground and avant-garde style.

They always impress with their looks!

Sometimes, they are lazy. They get so relaxed that they even neglect their obligations or do not put much in their goals.

Their natural steadiness makes them sometimes miss out great opportunities in their life. Just keep to your chameleon positivity, but stay active.

Engage with new things and projects with Chameleon patience and adaptability.