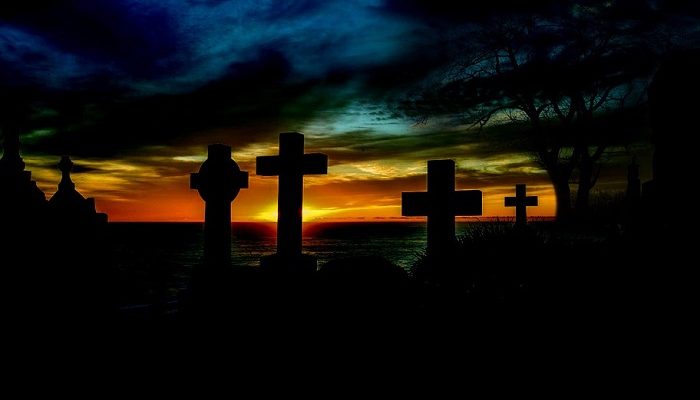 Cemeteries can be quite haunting even if we dream about them in the most positive way. There is simply something unpleasant in dreaming about cemetery that make us want to wake up immediately.

Cemeteries can have significant meaning in our dreams, which is why we should pay attention to these dreams.

Weathered tombstones cast shadows on grass and withered foliage, bare willow trees stretching their scrawny branches accusingly skyward, and a pale moon that is constantly obscured by rapidly moving clouds – cemeteries are the scene of many horror movies and scary stories.

But they are also a place of farewell and remembrance of loved ones who – just wrapped in a shroud, placed in a coffin and buried – are now in the cemetery and are kept alive by memories.

We refer to them as “the graveyard” and “final resting place”, and often we are struck by a strange feeling when we enter it, feel fear, longing for death or sadness. Weeping angels and ornate crosses watch over the dead and convey a mixture of grief and beauty. Especially on a children’s cemetery, the graves of the little ones are often lovingly decorated.

Cemetery dreams are all the more common, the older we get and the more we deal with our own deaths. What exactly your subconscious mind would like to tell you with this dream symbol is explained below.

First of all, standing in a cemetery in a dream can mean that you are dealing with the actual death of a loved one, a dear person. Especially if you enter a certain cemetery or visit a real existing grave, it is a clear indication. Maybe you have not really said goodbye to the deceased, have inner grudges or can not (yet) let go.

Especially older people are dealing with such dreams with the death of loved ones or even their own death, which does not seem so far away as it did a decade or two ago.

If your subconscious mind in the dream does not refer to a specific death, it may be dealing with the past. What can you not leave behind? Does anything bother you that you should finally “dig”? A look at the current life situation is helpful to decode the dream symbol.

To dream of a cemetery can also mean that the dreaming wishes in a difficult situation advice, which he does not want to get from the living – he does not know any further and seeks therefore in another world for help, with the dead, the have already crossed the transition between the worlds. 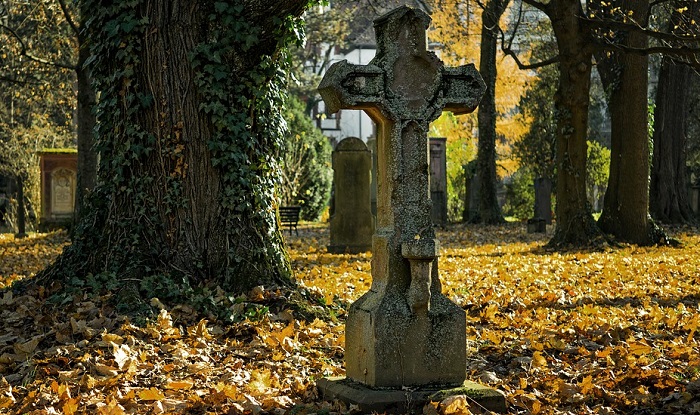 Folkly cemetery dreams are also associated with the actual death. It used to be believed that flowers used to carry a grave, especially if it was an open grave, was indicative of an imminent death in the environment.

The cemetery as a place of the dead and the past indicates as a dream symbol that the dreaming deals with one of these topics. In the subconscious dreamscape emotions and fears can be admitted, which are pushed aside in the awake life.

Man knows about his own death and is afraid of dying. That is why dealing with this topic is healthy and important. Graveyard dreams, according to the psychological dream interpretation, indicate that they are facing their own fear.

It may also be a specific event from the past that occupies you. Your dream becomes especially clear when you watch a funeral: this means that you finally want to pray for an event, perhaps a feeling or contact with a person from whom you should break away. Buried that portion of your past so that you can focus on being free.

In addition to the above interpretation options, a cemetery in the dream can also indicate the need for rest, for relief. Women in particular dream of this dreamy more often. Burdened by work, partnership and children, you suffer from the stress and numerous demands that society and perhaps even you make on your own, and long for the peace of the dead.

This, however, has nothing to do with an actual death wish, but is to be understood metaphorically. The dream indicates that you should create resting islands in stressful everyday life.

The cemetery is closely linked to death, however In spiritual terms, death is not the final stroke, but a transition to another world.

The cemetery appears as a place of souls waiting for their transformation, their rebirth into a new body.

As cemeteries in larger scale there are cemeteries like that since the 4th century AD, but there was the form of earth burial in addition to the cremation already in many pre-Christian cultures. The cemetery, formerly called different names depending on the culture, is a product of the Christianization of Europe. It is the walled burial place for dead.

Historically, it was also the refuge of the community in the war, in village forms of settlement he is usually located next to the church. The reason for this was that in the altars of the churches relics of the eponymous saints were kept and the deceased should be as near as possible to these relics in death. Burial took place immediately inside the church or outside the church building. The burial places were so within the range of the everyday life.

Already in the Middle Ages, the general population increase, the rural exodus and thus the expansion of the cities as well as epidemiological considerations led to the laying of the cemeteries in front of the city during the plague epidemics. Then the Thirty Years’ War, during which one third of the population of Germany died, demanded drastically practical solutions to the funeral problem. The bodies were buried on coffers outside the settlement centers. A period of reflection began in the field of cemetery and funeral services much later, namely in the 18th century in the wake of the Enlightenment.

From the circle of the natural sciences and in particular by the physicians from the point of view of hygiene the removal of the cemeteries from the settlement areas and their new installation outside of the localities was demanded. During this time, there are also the beginnings of a kind of public supervision of the cemetery system.

The tomb as an expression of personal memory

The individual and memorable gravestones are the engraved forms, inscriptions and symbols. The bereaved found comfort in a tomb, which also allegorically reminds of the personality of those who died.

The most well-known symbols on grave monuments in our cultural area include above all the Christian symbols such as cross, Christ monogram, symbols of God and the world, but also allegorical symbols from the animal and plant world as well as professional and craft symbols.

Everyone had to make a decent funeral for the deceased. The family was obliged to make a funeral and to die in the strangers. According to the law, everyone was obliged to land the land on the uncovered body he would encounter. Funeral customs were strictly prescribed because it was believed that only the deceased soul could be humiliated. If he had not been honored by the prescribed ceremony of the funeral, he would be persecuted to pursue the mercenaries (larvae). The dead body polluted the area where there were people nearby.

Therefore the priests of the public cult must not come to any touch. All the details of the funeral were the funeral job of the Libyans.

The funerals in the broader sense included all the actions with the deceased’s body and the sacrifice of its faults until the nineteenth day after the funeral when he ceased to wear delicate clothing. The funeral in Rome could be private or public (funus privatum, f. Publicum).