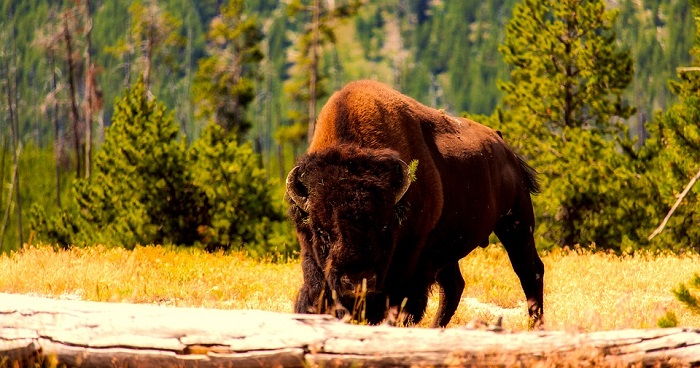 Having a spirit animal as your loyal companion on your life long journey is a true miracle. Animal symbolism is still strong in many societies, even though contemporary world takes us far from our nurturing Mother Nature.

However, it seems modern humans, living in technologically superior society and environment, have recognized something is missing. An unbreakable bond between people and nature still resists the challenges of modernization, in a way.

We still express an incredible progress in terms of technology, but our focus had changed towards matters of ecology, natural healing and recreating our connections with spiritual realms.

Talking about spiritualism and animal worshiping, we could trace this phenomenon far back into past. Some societies and nations have had a specific connection with the realm of spirits and Mother Nature.

Native Americans are quite an example. In this article, we will discuss buffalo or bison symbolism and spiritual meaning. This marvelous animal inhabits North America’s plains and prairies. Another specie, European bison, could be found in some parts of Europe and around Mount Caucasus.

This animal was extinct in the wilderness. When talking about bison symbolism and spiritual meaning, we think of American bison.

Bison or a buffalo?

First of all, let us uncover the mystery of difference between the two. Bison or buffalo terms refer to American species. Bison and buffalo are not the same specie, although they both belong to the same family of Bovidae.

However, bison, the animal we talk about in this article, is often called North American buffalo and it is addressed as such.

Therefore, if you find information about spiritual and totem meaning of bison/buffalo, it refers to American bison, classified as Bison bison in Latin. 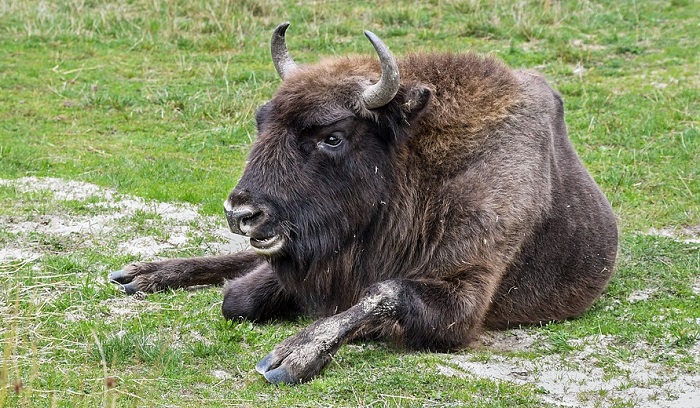 North American buffalo or bison was a sacred and worshiped animal; both Native Americans’ tradition and urban Americans still nurtures belief in spiritual power of this giant cattle.

Bison is big, massive and impressive looking animal. It has thick, brownish fur, a big head with little horns and a huge, muscular and quite well ‘padded’ figure. This mighty animal is very strong and it is able to run fast, despite of its size and mass. Bison would usually let people approach them freely; however, their temperament is not always predictable. It is not strange to happen a bison attacks a human being.

Bison have special significance to Native Americans. This amazing animal was a part of their world, along with other animals, in old times before the White Man came and devastated the lands of their ancestors.

Native Americans have many folklore tales, beliefs and legends about buffalos. The animal is considered sacred, it was worshiped and loved. To Native American tribes, bison symbolize prosperity, abundance and protection.

This animal has an important place in local mythology and shamanic tradition. In general, symbolical meaning of buffalo enlists several important concepts and ideas:

Legends and modern symbolism of bison

Before we examine hidden meaning behind bison symbolism as spirit and totem animal, let us share with you some of interesting stories about this incredible animal.

Many Native American tribes tell legends about bison and these folklore tales are always strongly associated with natural Earth processes and human practices related to that. One of the loveliest and the most popular story of these is Sioux people legend about the White Calf Woman.

Once upon a time, on a pleasant summer night, a beautiful woman dressed all in white clothes appeared to Sioux people and taught them about all secrets of the earthly processes. She blessed them with the gift of consciousness about the great circle of life, so they could follow their life path in harmony with nature and all of its creatures.

As she was leaving, woman changed into a lovely white calf of a buffalo and massive buffalo herds were seen all around. After this wonderful event, bison number grew larger and the land became fertile and rich.

White buffalo has a special importance in Native American folklore. All white and rare animals have it. However, common bison also change their color as they age, which is associated with changes of seasons and phases of earthly life.

American bison is a common symbol all across the North America and Canada. Many modern states, numerous institutions and societies in America use it as a powerful symbol or feature it in their logos, flags and coats of arms.

Bison is a large, strong, calm and resistant mammal. This four-legged fellow is also a devoted and protective parent, which is a virtue highly praised amongst humans.

Bison are known for their patient and tranquil behavior. They do not rush into danger and like to stay safe and secure and be sure their herd and family are safe, as well. However, when it comes to defense of what they consider their own, buffalos do not hesitate.

They are well aware of their impressive strength and intimidating looks. They would do everything needed to protect their young and weak ones.

Protection and devotion – Bison are protective animals and their symbolism is particularly strong about that. In nature, they look upon their family and protect their herd. These animals do not hesitate when their relatives are under a threat of other animals or humans.

That is why buffalos are highly praised and loved by local Americas’ tribes. They represent devotion to your loved ones, protectiveness and readiness to stand for your own. Bison are associated with virtue of unselfishness, which is a rare finding amongst humans, to be honest.

They teach us of virtue to protect the ones we love, even if it could get ourselves harmed.

However, even if they appear to be calm, peaceful and docile, they are unpredictable. Bison could attack other creatures without warning or an apparent reason.

Their protective nature may provoke an unexpected behavior you would much like to avoid. In symbolical sense, this bison trait is somewhat tricky and dangerous.

Strength and stamina – Buffalos are strong, massive animals, that is obvious. They are fearless and quite resistant to natural environment and dangers around. There are not a lot of wild animals that would attack a grown up bison. These incredible mammals are aware of that.

Yet, they know their strength lies in unity; bison are sociable creatures and they love to keep in herd. A wandering and lone bison is a rare finding.

These mammals are able to adapt to natural environment and they are humble when it comes to food and shelter. They could endure difficult times without much trouble and with a lot of care for weaker and younger members of the herd.

Therefore, buffalos are powerful symbol of strength and stamina. They inspire us to endure difficult times and sty strong.

They are stubborn, in a way, which might turn out bad both for them and people with bison totem, if not paying attention. They are determine when it comes to doing things they are naturally predisposed to do, although they may seem inactive and slow. In truth, these animals are fast and agile, when needed.

Freedom and survival – American bison could be tamed and cross-fertilized with domestic cattle and it is actually the most docile specie of the family. However, the natural habitat of these large even-toed animals are vast northern prairies and plains, where they would roam free in their massive herds.

They wander across prairies, surviving on eating grass and plants, following their natural herding instincts. In symbolical sense, bison represent free spirit and the harmony of nature. That is one of the reasons Native American tribes admire them so much and value them as powerful spirit animals and totems.

As we have said, bison do not need much to survive. They have an impressive stamina and they are natural born survivors. They would do whatever it takes to keep their herd safe, so they are resistant to many challenges nature puts on their way.

Unfortunately, bison were hunted and killed by humans in devastating numbers. However, buffalos know how to survive and adapt to natural environment, which is something we have been learning for ages. Spiritually and symbolically, buffalos represent the will for survival and subsistence of the collective.

Abundance and prosperity – Bison is an animal that loves large numbers. They live in massive herds and always care for its survival. They reproduce in large quantities and are extremely caring and protective of their own. Thus, bison represent abundance.

For Native Americans, bison is associated with prosperity and riches of the land. It is also associated with fertility and reproduction, which is very important in both natural and spiritual sense. These associations are generally accepted in interpretation of spiritual meaning of animals, so we use it as well.

Gratitude – Another important concept associated to bison is gratitude. That could easily be understood. Bison is a calm, strong, patient and determine creature of humble needs. They live eating grass and not hurting other animals, if unneeded.

It is true they could be aggressive, stubborn and sometimes act against us without any logical sense, but that are exclusive cases. They represent gratitude for the life itself and for all the wonders Earth has to give us. In that sense, having a bison for your totem and protector is a real blessing.

Bison/buffalo as a spirit animal

Bison is a powerful and amazing spirit and totem animal. The traits attributed to this admirable brown-coated fellow are completely applicable to the role of a bison as a totem and personal spiritual guide.

This incredible spiritual guardian offers a lot. In the first line, it grants you protection, prosperity and brings you fortune. If you embrace a bison as your totem you would learn a lot. This amazing animal spirit teaches us how to endure difficult periods in our life and be grateful for all the things we have.

It encourages our openness, resourcefulness and kindness to others, but it also prepares us to stand for our own and defend ourselves. People with bison power animal are usually:

As you can see, these are mainly positive traits. Bison teaches us patience and calmness; you do not need to rush to reach your goals or to hurt others to get what you want.

Your spirit guide is tranquil and kind towards others and this is where an immense part of its power lies. Be gentle, but not compliant; give your love to others, but learn to recognize exploitation. This leads us to other important trait bison posses and could pass to its spiritual pupil.

Bison is stubborn, so people with this totem could be particularly hard to deal with, if they do not control their behavior.

Sometimes, bison spirit could lead you to wrong direction, if you do not learn how to use the trait of stubbornness in your advantage and in benefit of others. It could turn good for you: take your stubbornness as a useful tool and make it sophisticated.

You could become an influential individual who is not easily manipulated or mislead, but always listens to others and thinks it through. That is what your bison spirit actually tries to teach you.

People linked to bison totem are of a calm nature. Most of the time they would patiently work on their goals, without too much rush or panic. They are usually not aggressive and hysterical. This is very important lesson from your spiritual guide. Stay calm and focused and don’t let challenges of life get you off your track.

Be patient, when circumstances require that of you. Do not give up your cause and use the best of what life has to offer you.

Other important gifts from your bison totem include very good health and determination. Bison spirit people are usually of an excellent physical and mental health.

That helps them stay determinate and focus. These people do not shed their energy if unnecessary, but keep it for right moment.

They are able to share unconditional love with their partners and family and keep strong and unbreakable friendships.